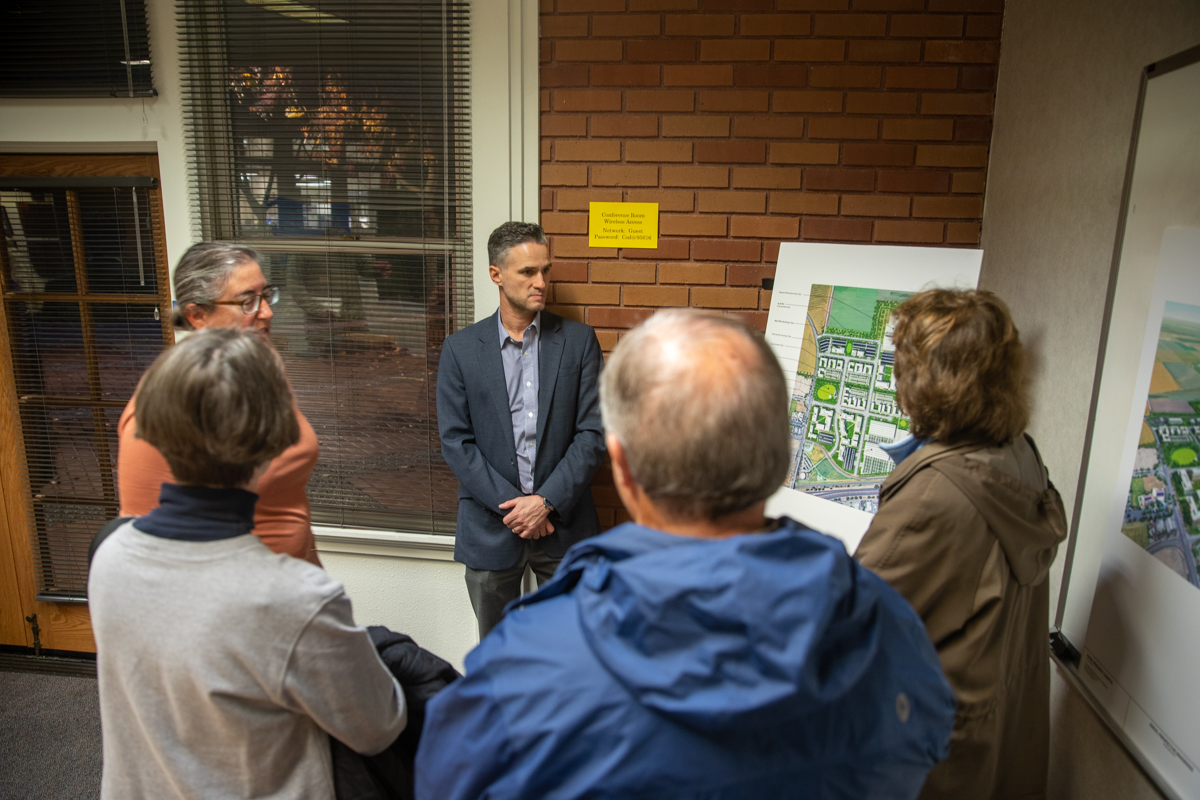 The city is looking at analyzing changed conditions, especially traffic on Mace for which it is conducting a new traffic study that should take one to two months to complete.

If the city did not have to hold this meeting, the meeting largely turned into a vehicle for some of the more vocal critics of the project to express their dislike and ask some pointed questions.

Nick Pappani, a representative from Raney Management, who is conducting the environmental review, noted that the city in 2017 certified an EIR where it looked at both a main project and a mixed-use alternative with an equal weight analysis.

He explained that because they have a certified EIR they will look at the issue of “how has the project changed and would those changes result in significant impacts to the environment that were not previously addressed.”

The second question, Mr. Pappani said, is “how have the changes in circumstances since the original project was conducted and certified by the city.

“This isn’t an entirely new analysis,” he explained.  Changed circumstance and what they should be looking at.  “That’s really the focus of the comments we’re looking to get tonight.”

In a letter to the city, posted on the city’s site, the applicants noted a few changes.

“ARC excludes the City’s ±25-acre parcel (APN 33-650-026) in the northwest corner. The City parcel will retain its agricultural land use designation and zoning,” the applicant writes.  The overall acreage is thus reduced to 187 acres.  “6.8-acres of the City parcel is proposed with an easement to be improved and utilized as an Agricultural Buffer.”

The letter also notes that the parking ratios are reduced from the original proposal down to 4340 parking stalls:“This is less than the City municipal code standard and reflects changing travel patterns.”

Meanwhile, with a reduced footprint that increases the floor area ratio (FAR) from .82 at MRIC to .93 at ARC.

At the meeting, Matt Keasling, a land use attorney working for the applicants, explained that they had previously included the city’s 25 acres in the northwest corner of the project, he said, but “the decision now coming back in is that we no longer were going to pursue the land uses on the city’s 25 acres (and) it will stay as a general plan land use designation as agriculture.”

The previous proposal was for offices or residential uses on the land.

Roberta Millstein interjected, saying “that’s not quite accurate… you are seeking to use part of that land for the ag buffer for the project.”

Matt Keasling responded, “We’re not looking to develop it.”

Colin Walsh added, “But you are including it in the project.”

Mr. Keasling noted that it is still included for annexation purposes, so the objective is to bring it into the city so the city annexes that property.”  He noted that it will not be part of the Measure R proposal since that only applies for changing land use designations.

Colin Walsh interjected again, “I think the concern is that they presented information that wasn’t accurate.”

Mr. Keasling pointed out that he didn’t say anything that wasn’t accurate, as “we’re not proposing development on the 25.”

Ms. Millstein added, “You are proposing to use that 6.8 acres to satisfy the ordinance.”

Mr. Keasling stated, “We don’t dispute that at all.”

But because the city was doing analysis on Mace south of the freeway, “there was an acknowledgement from everybody – the applicant as well as the city – that traffic on Mace has changed in the last four years.”

The question is what else has changed since the original analysis was completed in 2017.

After requests from some in the audience, the city agreed to allow for about ten minutes of questions.

Ashley Feeney pointed out that the city has not accepted anything relating to the 6.8 acres, “all the city has done has been to accept an application” and they are preparing a CEQA analysis to evaluate the proposal.  “There has been no agreement as it relates to the 25 acres, it is a project proposal that will be evaluated along with the overall project.”

One person asked, “Why is there such a short window for people to respond?”  They pointed out that they have until December 9 to have comments.  “That seems like an incredibly short period of time

for people to get counseled, get legal letters written and environmental letters,” the woman said.

The city responded that this meeting was under the guise of the scoping meeting.  Sherri Metzker pointed out, “A scoping meeting has a very limited purpose – it’s main purpose is for you all to help us identify what the changed circumstances might be that are out there, that we have to take into consideration.”

She said, “This isn’t by any means the last time that the city’s members are going to have a chance to comment.”

She pointed out that they still have to do a 45-day circulation when they publish the EIR, then they have to respond to the comments and circulate that.

“We’re going to have the exact same thing happen again,” she said, noting the comment periods in the previous EIR rounds.

Colin Walsh interjected, “We’ve been told that what we’re doing here is optional, that what the city’s doing is optional…  Once you decided to do a NOP and to do the scoping, under what authority is the city not following the legal requirements for notice and for comment periods?”

Roberta Millstein added, “Are these typically 30 days?”  She argued, “We’ve been given a much shorter window.  In fact, the window has only been extended because some people asked for it to be extended.”

The Rainey representative pointed out, “There’s no legal requirement when you do a supplemental EIR to have a scoping meeting.”

Ashley Feeney added, “This meeting is being done to solicit some additional comment and also have an opportunity for people to voice things that they want the city to take into account for changed circumstances.”

He added that the city was well aware of changed circumstances around traffic.

Another area that was pointed out is there seems to be some discrepancy between the project description from Table 3-2 of the MRIC EIR and the comparison map put out this week by the city. 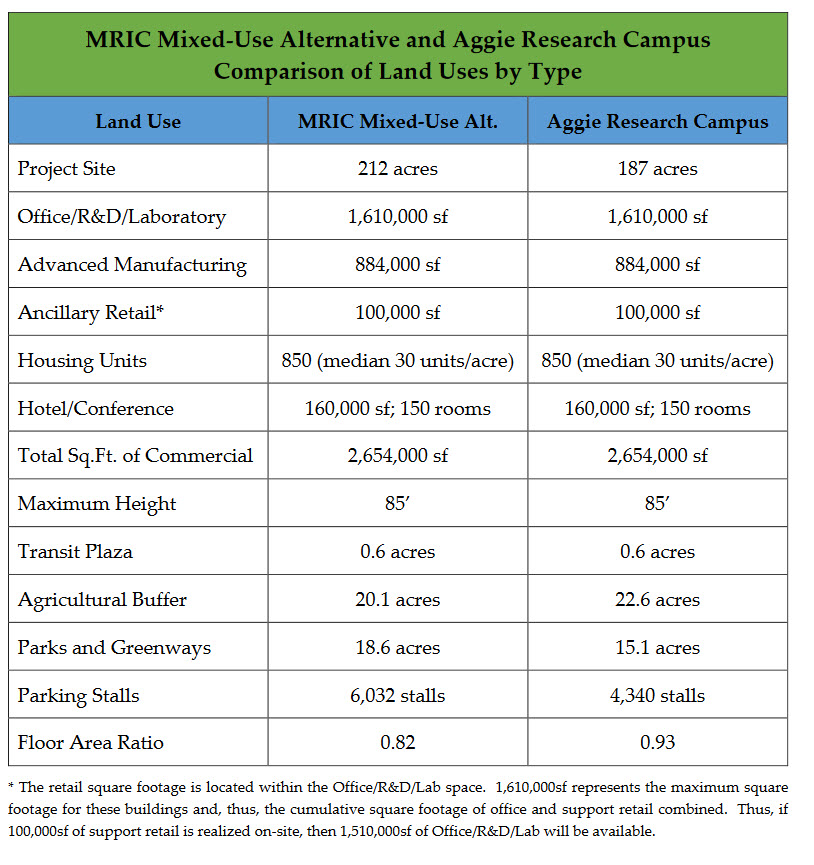