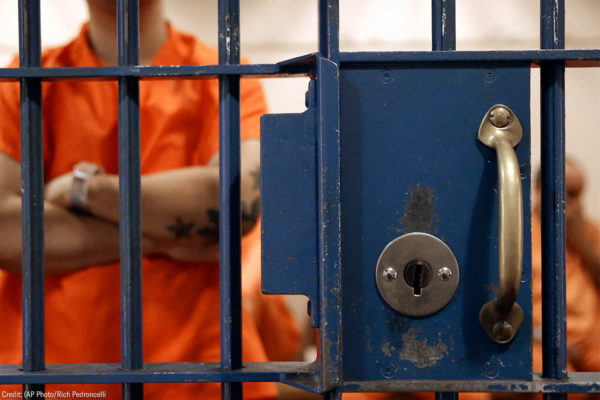 In Canadian County, Oklahoma if you have the money, you get out of jail. If you are poor, you stay in. That’s why we sued.

Imagine you are one of the 4,000 people arrested every year in Canadian County, Oklahoma, a county with less than 200,000 people. Maybe the police find marijuana in your car during a traffic stop, maybe the police have mistaken you for someone else, or perhaps you can’t afford the $40 per month you owe the court from a different charge.

What decides which way things will go for you? It’s not how serious the charges are. It’s not whether or not you pose a flight risk. The calculus is simple, and illegal: If you have money, you get out. If you are poor, you stay in. That’s why we sued.

Our client, Jermaine Bradford, was arrested on November 20, 2019 for misdemeanor charges and brought to the Canadian County Jail. He didn’t see a judge until he’d been in jail for almost a week.

When he was finally able to see a judge, it was hardly the kind of fair, robust hearing you would expect after being held in a cage and forced to sleep on the floor while longing for a chance to explain why you should get your freedom back. During the hearing, neither the judge nor Jermaine were in a courtroom. The judge met with Jermaine on a video monitor from her office, behind a closed door, away from the prying eyes of the public. The system provided no lawyer to represent Jermaine. The judge did not ask Jermaine he could afford for bail or let Jermaine ask any questions. At the end of the hearing, the judge told Jermaine his bail was set at $2,000. The whole encounter lasted less than three minutes.

Jermaine has now been sitting in jail for 19 days because he can’t afford his $2000 bond. Because he is poor, he can’t even afford the $200 he would have to pay a bondsman to get out. He is sitting in jail because the state is demanding a ransom for his freedom that he cannot pay. Ironically, he is caught in an awful cycle where every day he sits in jail he accrues even more fines that he cannot pay. To make matters much worse, if Jermaine could scrape together enough money from family or friends to pay the bond amount, he would lose his constitutional right to a public defender. In Canadian County, if you bond out of jail, you are deemed too wealthy to qualify for a public defender. Thus, every poor person is faced with having to choose between their constitutional right to freedom and their constitutional right to a lawyer.

This cycle is cruel, and unconstitutional. And that’s why we sued. Jermaine — and every person locked in the Canadian County jail — deserve a real, in-person hearing with a lawyer to represent them, in a courtroom open to the public and presided over by a judge who asks questions about whether they have a job and what they can pay. Jermaine — and all of us — deserve a system that makes sure he doesn’t sit in jail, just because he’s poor.

Share:
Tags:ACLUBail ReformCash BailPretrial Detention
Previous : My View: Housing Is the Top Issue for Davis Headed into 2020
Next : Sunday Commentary: We Should Revisit the Social Services Tax