Assuming the project goes forward, Davis residents will be asked to vote on whether or not to approve the Aggie Research Campus.  The developers for the project are estimating that roughly 5882 jobs will be located at the proposed development.

A question that some have asked is whether Davis needs additional jobs.  There are various metrics that we can look at.  Some that have been cited are the city’s relatively low per capita retail sales leading to a low sales tax yield – as compared to both other college towns as well as other regional communities.

There is also the overall lack of diversification of the economy and the large number of people who are traveling to and from Davis on a daily basis.

From a public opinion standpoint, the polling that we have seen shows that for the most part the generation of 5882 jobs is seen as a positive – only a tiny portion of the population sees the creation of thousands of new jobs as a mostly bad outcome, and it is somewhat intriguing that about as many see it as neutral as see it as mostly good.

Adding nearly 6000 jobs is not a small thing when we look at the overall job picture in Davis.

This figure does not include UC Davis employment on the campus.

Two pieces of data, however, paint a less rosy picture. 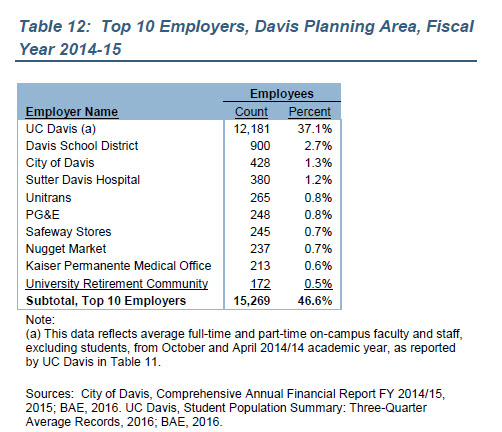 citywide employment reported by the CAFR.”

That shows the city is reliant heavily on government jobs, health care, and services.

Further, the report continues to note the lack of retail in Davis.

Finally there is the area of jobs-housing balance.

The report notes that the policy approach for much of the 20th century has the creation of “an artificial separation between jobs and residences in communities throughout the nation. Among the many unintended consequences of this policy approach are the lengthening commute distances.”

To solve this problem, the report notes that “the planning community has increasingly embraced the broad goal of promoting a better balance between the number and types of jobs available in a given place and the number, type, and affordability of the housing within the same area.” 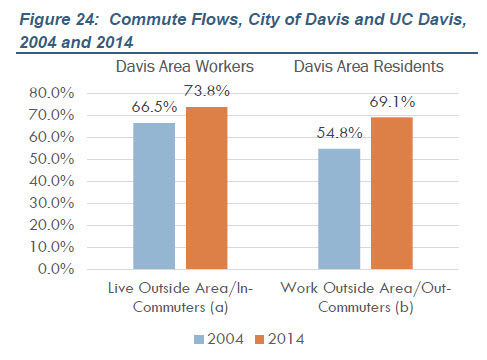 The report notes that there were approximately 28,465 persons employed within the City of Davis and on the UC Davis main campus in 2014, about 73.8 percent of those were in-commuters – they lived outside of the Davis area. 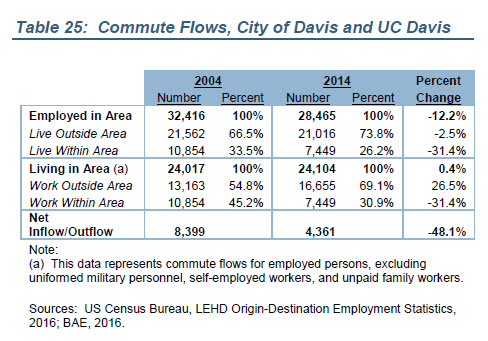 Writes the report: “The intensification of cross-commuting patterns, including an increasing rate of both in-commuting and out-commuting, reflects a growing disconnect between the employment opportunities available within the Davis area and the characteristics of Davis as a residential community for workforce households.”

This is crucial to understanding the nature of the problem.  It is easy to say that there is a net-in flow of jobs and therefore we have the jobs we need.

But that’s not what is happening.  What is happening is that we have a mismatch between the jobs we have and the ability to house the people working here.  While at the same time, we do not have the jobs in Davis to support the majority of people living here.

The report notes: “[W]ith an existing net inflow of workers (i.e., jobs minus employed residents), an average residential vacancy rate of only 3.7 percent (and a multifamily rental vacancy rate of only 0.2 percent), and little new housing development, the community’s existing cross commuting patterns are likely to intensify, corresponding with upward pressure on area housing prices.”

The figure points to the need, of course, for more workforce housing in town.  But some people will argue that creating additional jobs will simply exacerbate this problem.

Moreover, we have a brain drain.  UC Davis has one of the lowest student retention rates among comparable universities, with just 23 percent remaining in the metro area.  And yet as we know the majority of graduates at UC Davis are in STEM fields – fields that would be attracted to and perhaps have the opportunity to stay if we had high tech and research-oriented jobs to offer upon graduation.

It is here that I think the story most favors the need to create nearly 6000 local jobs in STEM fields that could help to retain recent graduates, and becomes a reason for people in the 30 to 50 age range to stay in town rather than take their degrees and utilize them elsewhere.

I do think we need to be honest here though – we need housing which enables those people to not just work in town, but to live in town.  The housing proposed at ARC is probably not enough based on the EIR estimates, but in combination with other projects and workforce housing, it can help improve the housing-jobs balance and provide jobs, enabling more people of working age to live in Davis.

Will some view this otherwise?  Of course.  There are those opposed to housing growth who will see added jobs as a reason for more housing.  But I believe the overall fiscal picture in Davis calls for more of these types of jobs to improve our overall balance.