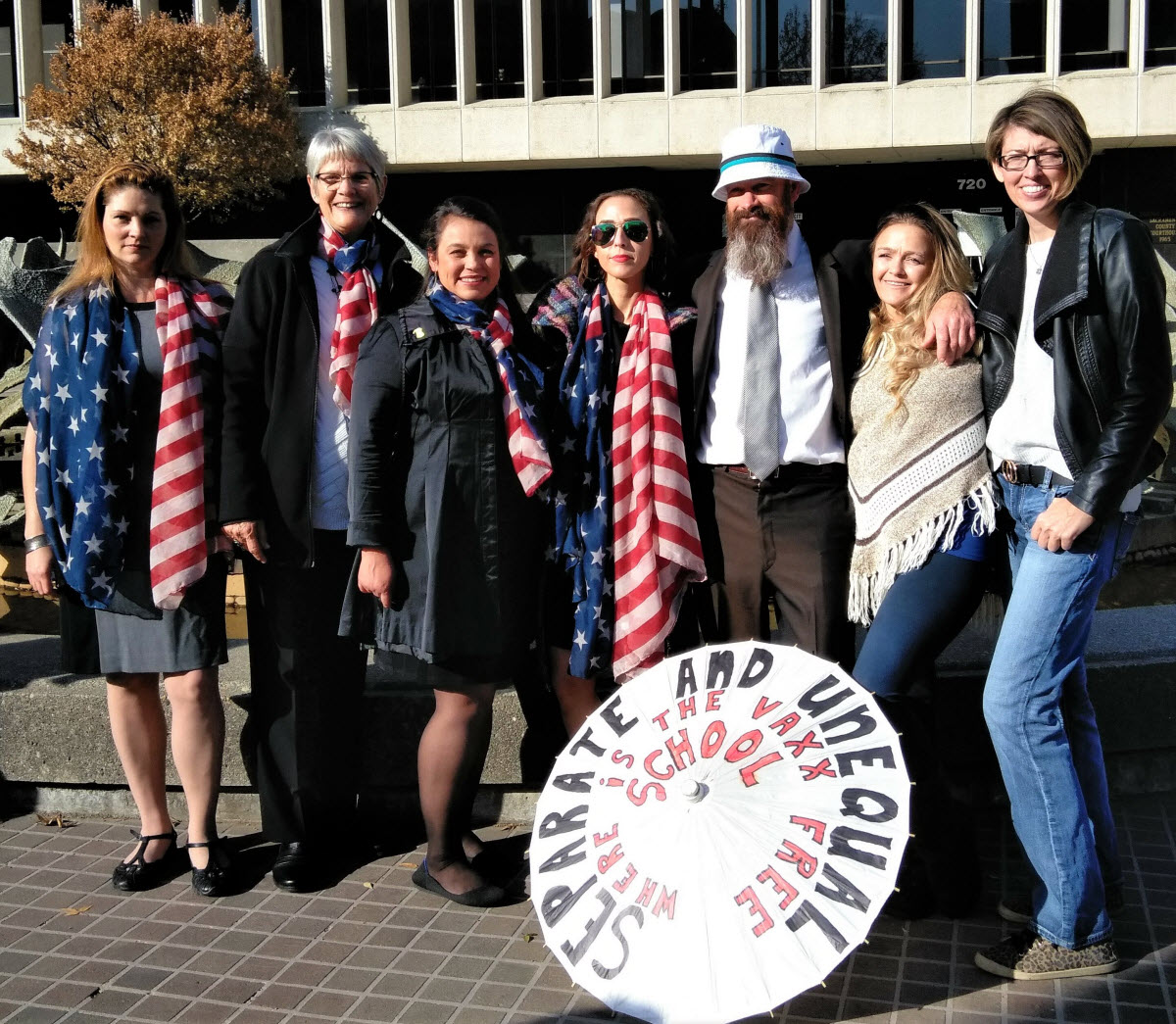 SACRAMENTO – A lobbyist or big money donor is one thing. But state legislators here inside the Capitol Dome have apparently had it when it comes to anti-vaccination advocates, who now find themselves with multiple court dates in criminal court.

In fact, in addition to criminal charges lodged against three activists, at least two lawmakers over the past few months have filed for civil restraining orders to keep those particular constituents away from them.

Campaign contributors with fistfuls of money may be welcome by politicos, but those who, as lawmakers claim, stalk them, threaten or yell and toss things – like blood – from the gallery overlooking the floor of the Senate are quite another.

As the VANGUARD reported about a month ago, State Senator Jim Beall (D-Campbell) filed for an injunction seeking to deny the militant speech of an activist, in part because of political slogans on the guy’s umbrella.

Anti-vaccination advocate Mike Mattingly won that round, successfully arguing his free speech was more important than Beall’s fear. In the end, Judge Philip Stanger denied Beall’s request for an injunction.

This week, Sen. Richard Pan (D-Sacramento) succeeded where Beall failed – he did get a restraining order from Sacramento Superior Court against activist Kenneth Bennett, who is now barred from coming within a football length’s distance from the lawmaker, his Capitol and District offices, home and car.

get exemptions for their kids to avoid the vaccinations but he is the author of that legislation. And he makes appearances nationwide urging stiffer laws mandating vaccinations.

But protests can result in criminal charges.

Pan has said Bennett’s “unlawful violence…caused me to suffer substantial emotional distress as I am extremely fearful for my safety.”

It is unclear yet if Pan will be a witness in Bennett’s trial.

Bennett followed Pan and another lawmaker when they were headed to a function in downtown Sacramento, and used his cellphone to video them and then pushed or shoved Pan. Bennett was arrested for battery.

And Sen. Beall’s nemesis – Mattingly – faces a January court date for misdemeanor resisting arrest when he and six others were jailed at a Capitol protest.

Charges were not filed against the other protestors – three blocked entry to the south side of the building, and three others barricaded the parking garage entrance to the Capitol. But Mattingly wasn’t as lucky.

No injuries or property damage were reported, and those arrested engaged in non-violent civil disobedience, said protest organizers, who charged lawmakers had “failed us” in passing legislation that imposes new, more stringent guidelines for parents wishing to exempt their children from vaccines.

Mattingly said that he wasn’t surprised that he alone was charged for the September action, and that it was not a coincidence – maybe because he’s already had a “run-in” with the state senator, and won, in civil court.

Mattingly, though, took it in stride, and said he welcomed “another chance to win in court.”

Beall actually sought a restraining order against Mattingly back in September, claiming that the activist was “aggressive” and insisted on talking with him about the vaccination issue, as well as water fluoridation, at public events.

Beall said that he feared the speech of Mattingly, who also, in addition to questions for the lawmaker, displayed anti-vaccination brochures and an umbrella with slogans on it.

The state lawmaker cited a river clean-up and senior event as two examples of where Mattingly, who participated in the public events, asked Beall and staff questions.

“As a result of these incidents in which Mattingly has committed unlawful (acts), and because Mattingly has made several statements that he will continue to seek me out, I have suffered substantial emotional distress and I am extremely fearful for my safety,” said Beall in his court declaration.

In civil court, Mattingly said he “showed the collusion between police and Beall” and said he believed it “was harassment…simply because I was there…they said I was in his space, but there was a table between us at the river cleanup, and when I talked to him from the senate balcony, I couldn’t invade his personal space (Beall was below on the senate floor).”

“This was weakest thing I had ever heard of…that a sitting Senator would file a restraining order against a constituent because he doesn’t like the constituent’s political speech,” Mattingly said.

Finally, a third anti-vaccination activist reportedly has a January court date on criminal charges related to throwing blood in a menstrual cup at senators – including Pan – below her on the senate floor. Oddly, a check of court records Thursday found no record of that protestor, Rebecca Dalelio, on upcoming court calendars.

Pan has told news media he welcomes visits by people with questions or concerns about any legislation, even vaccinations, but doesn’t support what he calls “violence.”

“If we make policy based on conspiracy theories, that’s not good for our country. That’s not good for society. Policy needs to be grounded in truth,” Pan said. “We need to be clear: bullying and intimidation of this kind is unacceptable.”

Share:
Tags:Anti-Vaccination MovementAnti-VaxxerAssaultCres VellucciSacramento Court WatchSenator Jim BeallSenator Richard Pan
Previous : Reducing and Preventing Homelessness
Next : Learning From the Past: Work in the 40s and 50s Should Have Taught about Wrongful Convictions