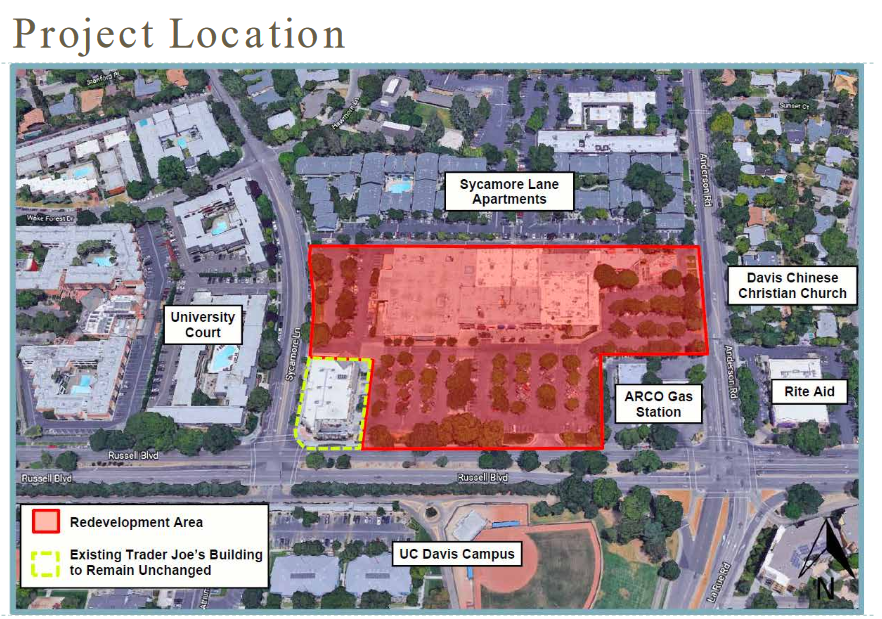 These days it seems that parking is one of the more interesting and surprisingly polarizing issues in this community.  On one side are those who argue that we should reduce the number of parking spaces in order to encourage people to find other means of transportation.

On the other side are those who argue that it is not the job of planners and local government to socially engineer driving.  All we do by limiting on-site parking spaces is push residents into commercial spots or residential streets.

This debate played itself out at the Planning Commission hearing on the EIR for the University Commons project.

Commissioner Greg Rowe for instance, already noted that there was another project – Davis Live – which had a relatively low number of parking spots for the amount of expected residents.

He said that Davis Live “is really an experiment” with 71 units and 71 parking spaces.  “I’m really uncomfortable going forward with another project that just assumes one parking space per unit for

residences.”  He would rather wait to see how it works for Davis Live.

Herman Boschken also had parking concerns: “Where are they going to park?”  He argued that students are going to “insist on bringing a car anyway, whether they use it or not.”  He suggested that they look at alternatives with off-site parking, which he didn’t see anything in the proposals.

On the other hand, Emily Shandy said, “I don’t share your concerns about the lack of parking.  I think we as a community need to move away from parking and away from driving in our own cars by ourselves all the time, to get everywhere.  One of the ways that the city can encourage that shift to  happen is to start making parking less convenient.”

Todd Edelman, a commission on the BTSSC (Bicycling, Transportation, and Street Safety Commission) has argued for the low parking alternative “as part of a city goal to reduce GHG emissions and vehicle use.”

Mr. Edelman suggests that the low parking alternative should look into what “what would happen if there were more housing in the same footprint, replacing not only residential parking but also retail parking in both structures and at surface.”

He argues: “This would result in hundreds more people living closer to their destination then they currently do. This would decrease VMT, an argument familiar to those that supported the ‘Nishi 2.0’ project and others. Decreasing VMT is a topic mentioned throughout the DEIR.”

My problem with the discussion at the Planning Commission is that it was not informed by data on student driving patterns.

Fortunately we have some decent data on student driving habits which should inform our discussion of parking for a student housing site. 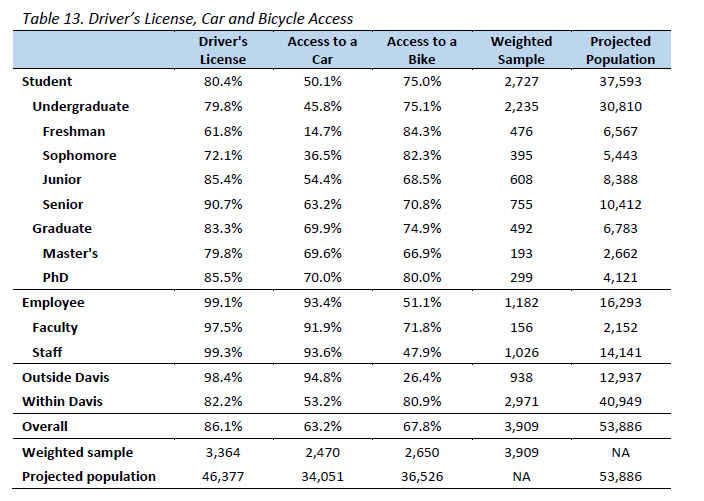 Every year, UC Davis does a travel survey and the nice thing is that we can track the results over time.

From the 2017-18 UC Davis Travel Survey, they found that roughly 50 percent of students have “access to a car.” That number dips to as low as 48.5 percent of all undergraduates.

So we actually have good reason to believe that the number of students who actually have a car in Davis is lower than those numbers.  For one thing, keep in mind, that the question simply measures access to a car.  It is not necessarily assessing car ownership.

For another thing, we know that people living in Davis have far less access to cars than people who live outside of Davis.  While this measure includes both students and employees, it is nevertheless instructive.  Of those surveyed, nearly 95% of those living outside of Davis have cars versus 53% who live within Davis.

We also know that as you get closer and closer to campus in terms of where students live – the higher percentage use means of transportation other than a car.  Those who live across the street from campus are almost never going to drive to campus.  Anyone within a mile from campus – just 2.2 percent drive alone or in a carpool as oppose to 76 percent bike and 17 percent walk.

Once you get outside of 5 miles from campus – the percent who drive to school goes way up – upwards three-quarters of all students drive alone and over 90 percent drive alone or in carpool.

The concerns expressed about the lack of parking seem to assume that most students have vehicles and will attempt to find ways around restrictions on parking.  But these data suggest that it is more likely people will self-select.  Those with cars, intending to bring their vehicles to town and drive onto campus are far more likely to live further from campus.

While providing people without vehicles a place to live close to campus would seem to be a great service.

Not only do students not drive or have vehicles, there is a sizable percentage that do not even have licenses.

According to the survey 80% of all students have a driver’s license.  That number starts going up as soon as students become sophomores and start living off campus.  But even among seniors about 9.3 percent of all senior and then 17 percent of graduate students – perhaps many of whom are international students – do not have driver’s licenses – which means they not only don’t drive, but they can’t drive.

Overall access to vehicles increase as students get older with almost no freshmen having access to car, but that number rising to 54% of juniors and 63 percent of seniors.

Looking at past surveys suggest that while these results have been relatively table over time, there has been a gradual reduction in the driving patterns of students.

Ten years ago in the 2008-09 survey they found that two-thirds of students had access to a car, including 62 of undergraduates.  The big drop was the number of people with access to cars who live in town fell from 68 percent in 2009 to 53 percent a decade later.

The data over the last five years or so show that these levels, while they fluctuate paint a similar picture – less than half of undergraduate students have vehicles, but those numbers rise by the time they are seniors to around 60 to 65 percent.

Of those people who live in town are much less likely to have access to a vehicle.  That number is nearly near half the number who live outside of Davis.  And those who live within a mile of campus are highly unlikely to drive to campus.

That suggests that having low parking apartment complexes near campus should be feasible.   Students with cars will self-select to places that are more amenable to parking their vehicle while students without cars can find places close to campus where they don’t need cars.

77 thoughts on “My View: Parking Issues Should Be Re-Examined in Light of Data on Student Driving Patterns”