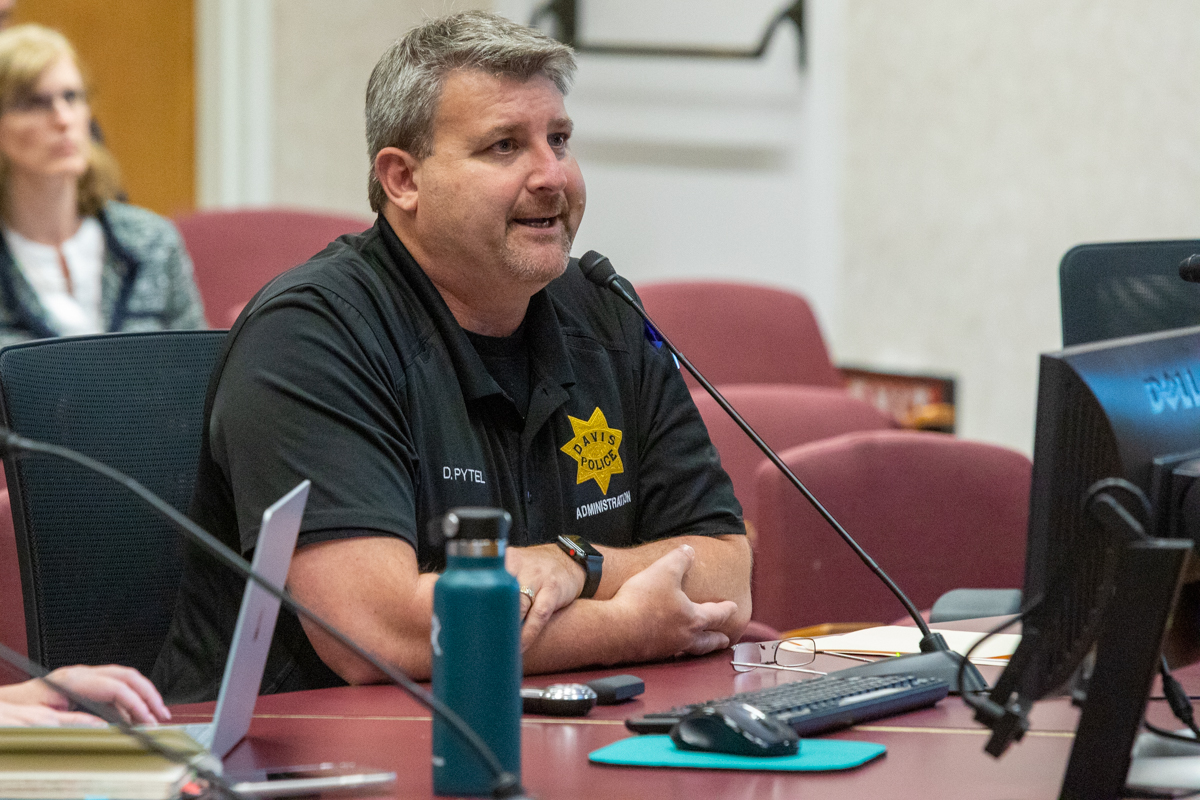 While a rash of robberies, two carjackings and a ring of catalytic converter thefts make for concerning headlines, the report delivered by Police Chief Darren Pytel on Tuesday was that crime was largely steady.

“I don’t have good news, I don’t have bad news,” the chief told council.  “Our numbers are really static… they haven’t really changed much in the last five years.”

Drilling down of course reveals some micro-trends and areas of concern.

Of note – violent crime is at its lowest level in over five years.  Homicide, rape, aggravated assault and even robbery are down.

One area of concern: larceny.  The chief reported that theft is at its highest level in over five years.  It is up for the second straight year – a 15 percent increase in 2019 over 2018.

Due to the sheer number of larceny crimes compared to all other categories, that is enough to push the overall Part I crime up six percent.

The chief did express concern about the nature of the robberies.  He noted that in the past, a lot of the robberies were strong arm robberies.  For instance, there was a string of brazen robberies at coffee shops where people were stealing lap tops.  But now they are increasingly seeing the use of weapons.  That is concerning because it has the potential to be dangerous.

He noted that these robberies are occurring due to gang activity from the region.

One-third of the victims of robberies are students and they tend to be young and female.

Both carjackings involved UC Davis students and he said that “the potential is great for violence, that causes alarm.”

Unlike in previous years – due to a significant effort by the department to increase recruiting – staffing is not a concern at the moment.  There are currently three vacancies, but they have two people about to graduate from the academy and thus Chief Pytel believes that the staffing vacancies might be down to just one by the end of 2019.

There is a continuing need to constantly recruit, however – because, as he pointed out, over the last 15 years they have been fully staffed for exactly one week over that time.

Much of the discussion by council turned to the issue of cameras.  One of the proposals was for a Remote Public Safety Camera System.

The staff report notes that the council has previously authorized the use of two of these “to monitor areas where crime has been reported, to surveil individuals suspected of committing crime, and to monitor both crowd size and crowd dynamics at City events in order to better deploy resources.”

The existing system is limited however, as they can only be used for short periods of time due to “their limited storage and power capacity.”

The report noted: “There have been community questions and feedback raised as to whether installing cameras at or near entrances/exits to Davis might serve to visibly deter certain criminal activity and/or, assist in the investigation, tracking of offenders, and prosecution efforts after the fact. Some communities have installed automated license plate reader technology to the camera systems, which furthers the ability to monitor stolen vehicles that enter or leave the City.”

The acquisition or use of additional cameras would require noticing and council approval as required by the Surveillance Technology Ordinance.  The council overall expressed interest in such an acquisition.

He said, “The idea here is not to catch someone from breaking into a car, it’s to discourage someone from (it) – it’s prevention.”

He said that the need for the increased usage of cameras in lieu of not having increased bodies was essential in their efforts to ensure public safety.

Councilmember Will Arnold noted that there will be a process for these items and he is open to discussing those details.

“I share many of the concerns that folks have about cameras and recognition technology, but my personal feeling is that license plates are not a private thing,” he said.  He saw the tracking of vehicles by law enforcement as the point of license plates, “I don’t see this as being an invasion of privacy, although there should be limits as to what is done with that information – crime prevention not cost recovery.”

During the general public comment, a few people raised concerns about the respite center and safety.  Will Arnold raised the point about crime involving homelessness and nuisance complaints, and “the numbers are there are more homeless people in town and folks are more aware of homeless individuals.”

Chief Pytel noted drunk in public and drug use were often related to homeless populations.  He also said they are seeing a lot more needles than have ever been seen before.

“Clearly there has been some changes in some of those areas,” he said.

Will Arnold asked about the issues surrounding the placement of the respite center.

When asked if there was an increased level of violence, Darren Pytel responded, “Not really.”

They steal from each other, beat each other, and the women are sexually assaulted continuously.

“I have expressed deep concern about the women who are living homeless and are out and about… and the things they are doing to each other,” he said.  “I think it’s one the tragedies occurring in the city right now.

“While I can completely understand some of the concerns from neighbors about the location of a respite center, and the type of presence that may bring, and the potential for some of the disorder and increases in crime… right now the crime is occurring all over town, it’s extremely difficult to police, and it’s extremely difficult to get people help, and to provide services when they’re all over.”

Mayor Brett Lee summarized the council position on cameras: “We are supportive of cameras and we would like you to present us with the proposal for cameras at city parking lots.”  He also asked for “reasonable” use policies for their use.