For over a decade now, the city of Davis has understood the daunting task needed to find funding for road maintenance.  Beginning in 2013, when the council identified the shortfall as being over $100 million, they started to adopt a strategy to allocate around $4 million of local funds annually to support pavement maintenance.

With the addition of roughly $1.2 million from SB 1, the city now has about $5 million available annually for road maintenance.

As staff writes: “The approximately $4 million in local fund investment that Council directed in 2013 plus the approximately $1.2 million provided annually in SB 1 funds is making a meaningful difference in the City’s ability to more pro-actively address pavement management.”

Despite this commitment, a new report finds that the average PCI (Pavement Condition Index) “will continue to decrease over time.”

As a result, staff is recommending the council find ways to increase the annual funding even more, and they have asked the council subcommittee of Mayor Pro Tem Gloria Partida and Councilmember Dan Carson “to work with staff and the Finance and Budget Commission to identify opportunities and mechanisms to increase annual funding allocations for roadway maintenance and report back to the City Council.”

Staff notes, “In order to reach the target PCI values set by City Council in 2013 (68 for arterials, 65 for collectors, 60 for residential/local streets and 68 for bike/multi-use paths), the

Nichols Consulting Engineers once again was selected by the city in 2019 to update the Pavement Management Program (PMP).  The PMP’s goal is to achieve as close to the target PCI values set by the council in 2013.

Staff warns that “these targets are not always achievable because transportation maintenance funding has been a growing challenge for communities across the country for many years. If the budget is too low, it may not be possible to maintain the entire pavement system to an average pavement condition, but only a portion of the system.”

Staff further notes, “When pavement repairs are made, it is necessary to also repair and bring into compliance adjacent curb, gutter and sidewalks; American with Disabilities Act (ADA) ramps; and street striping per the new Street Standards.”

Staff writes that of the remaining 65 percent of the budget, “about 85% of the annual pavement maintenance capital improvement program is budgeted for street repairs and 15% for bike paths/shared use paths. It is estimated that the typical roadway project needs to invest approximately 30% of the total pavement construction budget to these non-pavement assets (curb, gutter, sidewalk, and ADA ramps).”

When the budget is not sufficient for maintaining the PCI goal, “the program tracks the shortfall as deferred maintenance.”

One example of deferred maintenance would be that the city puts off “the recommended slurry seal on a residential street in good or fair condition and putting off the base repairs and crack seals recommended. The street will not obtain the added layer of protection and will continue to deteriorate and break down to a level in which a grind and overlay or street reconstruction is needed. Experience and research have shown that it costs much less to maintain pavement in good condition than to repair pavement that has already failed.” 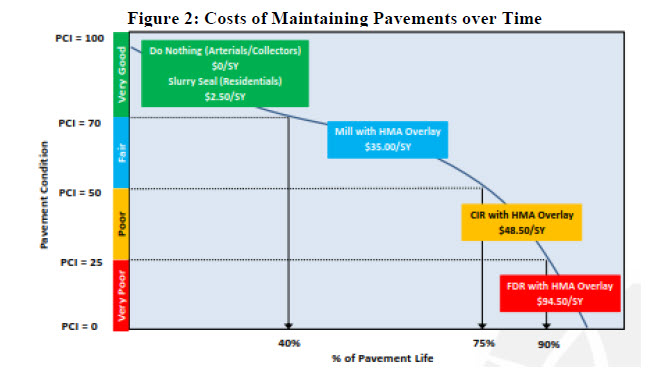 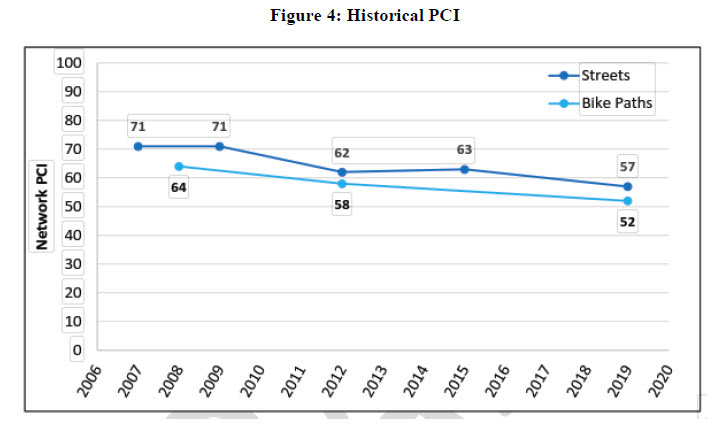 The consultants investigated the following scenarios over a 10-year period from 2020 to 2029, assuming 15 percent of the budget is spent on bike paths and an annual inflation rate of 4 percent (which is down from the previous projections of an 8 to 9 percent inflation rate).

Scenario 1: Unconstrained Budget – This scenario assumes the City’s funding is unlimited. This would require an investment of $123.5M over the next 10 years.

Scenario 2: City Budget of $4.335M/Year – This scenario assumes the City’s annual funding, including SB 1 funds, will be $4.335 million per year for the next 10 years. (This is based on the assumption that 85% of the total annual pavement management budget, $5.1M with SB1+Local funds, is used for street maintenance and rehab).

Scenario 3: City Budget of $3.349M/Year – This scenario assumes the City’s annual funding does not include SB 1 funding and will be $3.349 million per year for the next 10 years. This is based on the assumption that 85% of the total annual pavement management budget, $3.93M Local funds, no SB 1 funding, is used for street maintenance and rehab).

Scenario 4: Maintain PCI at 59 – This scenario aims to maintain the condition of the network at a PCI of 59 throughout the 10-year analysis period (current PCI is 57 but after the 2020 projects are complete, the PCI will be 59).

Scenario 5: Improve to Target PCIs – This scenario aims to increase the PCI for each functional classification to target values by the end of the 10-year analysis period. The target PCI for arterials is 68, for collectors it is 65, and for residential/local streets it is 60.

Scenario 1: Unconstrained Budget – This scenario assumes the City’s funding is unlimited. This would require an investment of $60.4M over the next 10 years.

Scenario 4: Maintain PCI at 52 – This scenario aims to maintain the condition of the network at a PCI of 52 throughout the 10-year analysis period.

Scenario 5: Improve PCI to 68 (average target for arterials, collectors, and residential streets) – This scenario aims to increase the PCI to 68 by the end of the 10-year analysis period.