SACRAMENTO – The Sacramento County District Attorney’s Office has given notice that it may be investigating someone who has been in telephonic contact with the mother of Sacramento Black Lives Matter founder Tanya Faison.

Faison Tuesday said she believes that “target” may be her.

Faison made it clear that if she’s the target, it is not because she’s broken the law, but because she’s made enemies by questioning the tactics of law enforcement and the DA’s office.

Faison also said she’s speaking with several lawyers about the matter, which she said is part of an attempt to violate her civil rights and prevent her from protesting law enforcement’s extra-legal force and killing of people of color.

Faison explained the letter was recently sent to her mother from the DA’s office, alerting her mother that she had either made a call or received a call from someone under criminal investigation.

Why is Faison concerned? She said she has suspected for a while that mysterious people in front of her home and driveway, and social media threats, may be because she has helped lead efforts to

question the killings by law enforcement of people of color, and the DA’s coverup of what Faison has called “murders.”

“While I’ve been doing this community work against police violence, I have been followed by law enforcement, and been the subject of other intimidation tactics by law enforcement. This letter gives me some justification for my suspicion,” said Faison.

The DA letter was vague and did not name the “target” or the crime. It just advised Faison’s mother that her phone may or may not have been “wiretapped,” but that she had placed a call or received a call from the “target.”

The letter – a copy of which was obtained by The Vanguard – was under the signature of DA Anne Marie Schubert, and signed by the DA’s “Gangs/Hate Crime/Major NARCS” unit.

Faison said her political activities, including the mobilization of the community to convince officials from the city, county, city police and sheriff’s department to be more transparent when people of color are killed, has led to the “investigation.” 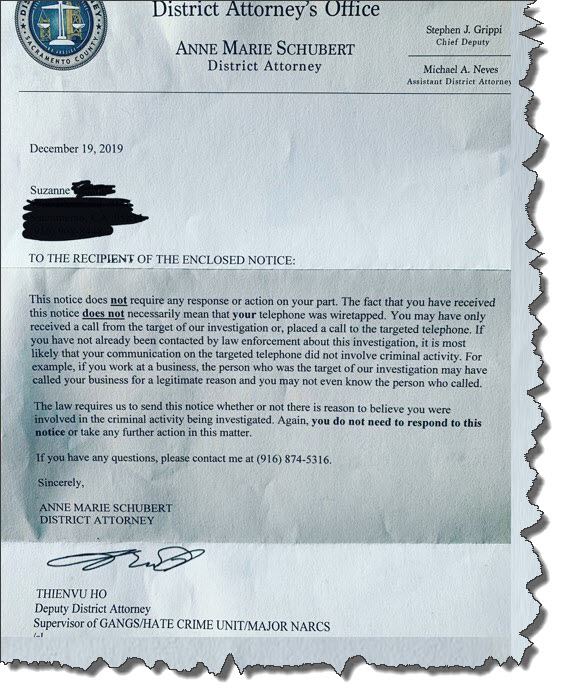 The March 18, 2018 death of Stephon Clark death, who was unarmed in his grandparents’ backyard when he was shot and killed by city police who said they feared his cellphone was a weapon, launched more than a year of protests that shut down city streets, freeways and entire neighborhoods.

In March of 2019, 84 people – including reporters, legal observers and clergy – were arrested for being at a Stephon Clark protest in the wealthy East Sacramento neighborhood. Charges were never filed, and a civil rights lawsuit is pending in the courts. Sheriff, city police and California Highway Patrol officers were involved.

Schubert and the DA’s office have also come under fire by BLM and Faison. And after Schubert decided not to pursue charges against the officers who killed Clark, BLM sponsored a protest at the DA’s downtown offices that lasted months. A fence was erected around the DA’s office because of the almost daily protests.

When pressed, Faison said the “target” letter her mother received is also very suspicious because the phone number referenced for her mother is not active and is more than 10 years old. Faison said her mother was out of the country until recently.

In another interview, Faison said “It is interesting that resources are being used to surveil me and I have never done criminal things. These same resources should be used to fixing policing problem, the Sacramento County Jail problem, and corrupt sheriff problem. My community work simply (asks) law enforcement to stop killing us, and for racial equity. Black Lives Matter Sacramento is not a ‘gang’ or a ‘hate group.’”

Faison’s efforts to change the police culture, or at least encourage more transparency of police and sheriff officials, and officers and deputies, has taken her from the streets to city council chambers and the board of supervisors.

She’s even protested near the home of Sheriff Scott Jones.

There’s been a handful of arrests for non-violent civil disobedience over the past two years – Faison was arrested at least twice at peaceful sit-ins. But all cases were dismissed and not even filed.

One thought on “Is ‘Target’ Letter to Mother of Sacramento Black Lives Matter Founder an Effort to Silence BLM Leader?”