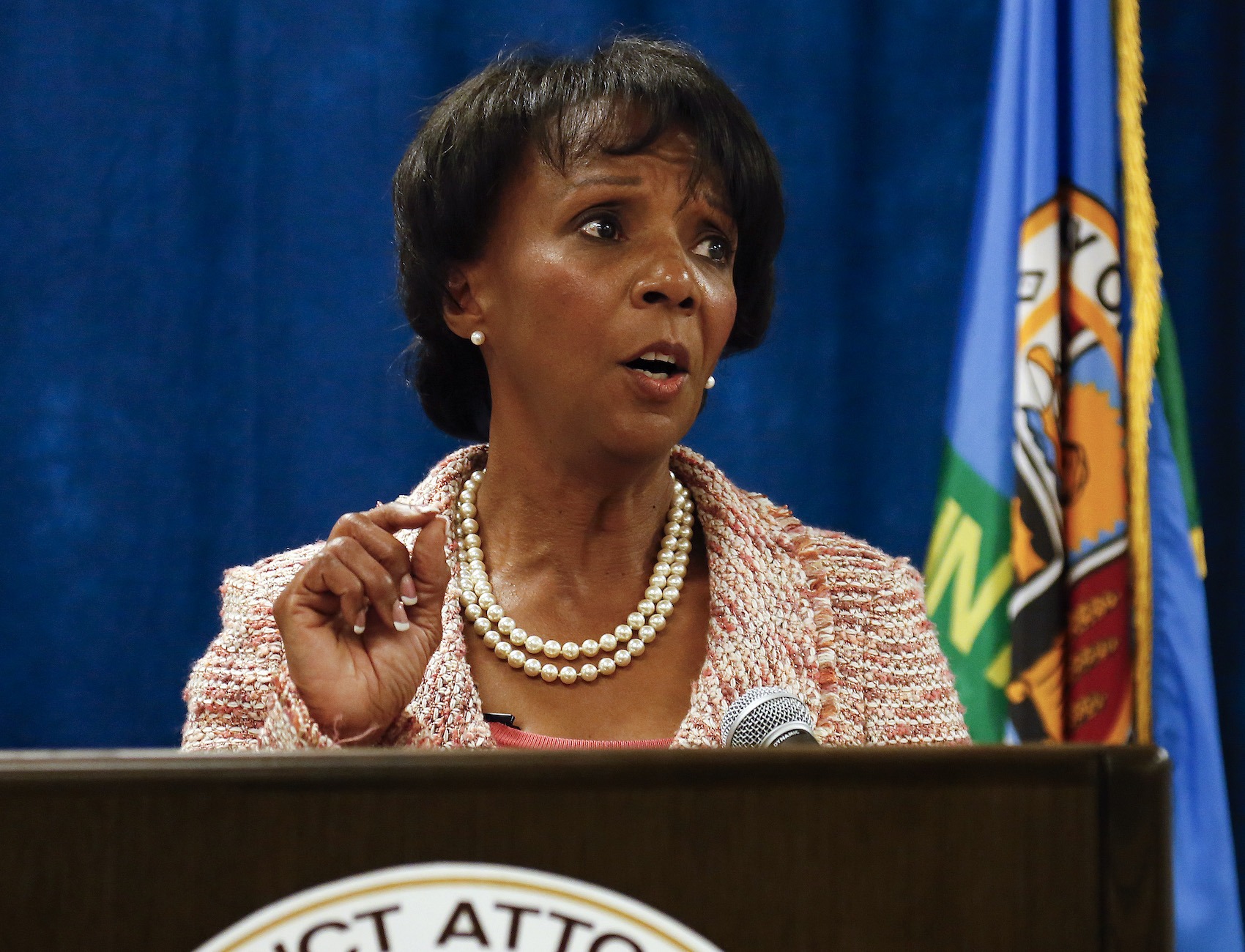 As a form of punishment, incarceration does not enhance public safety when it is not balanced against its tendency to make a person’s unfortunate situation worse.

Last year, two-term Los Angeles District Attorney Jackie Lacey took a trip to an elementary school in Pacoima where more than 20 percent of all enrolled students are homeless. She said she was touched by a Los Angeles Times story about the school, and thought she should pay the children there a visit.

Lacey, who faces her first electoral challenge since 2012, stood before an auditorium of 10- and 11-year-olds and proceeded to lecture. She talked about how she came to be the first African American woman to serve as the district attorney, how the students could expect the criminal legal system to work, and how they could “make better decisions for their future.” At the end of the visit, a deputy district attorney traveling with Lacey turned to a local news reporter and said she believed all these children needed was for a prosecutor to come tell them, “I believe in you.”

Virtually every Angeleno believes homelessness is a serious problem facing this sprawling Southern California metropolis. But pity or paternalism from the district attorney’s office is not enough to help end a crisis that is causing the deaths of an average of three people each day.

In Pacoima, the despair is reminiscent of a Charles Dickens novel. The high cost of housing is pushing pupils in this community of just 100,000 people, 89 percent of whom are Latinx, to live “doubled up, tripled up, quadrupled up” with other families, school principal José Razo told an education policy blog, and it is affecting their overall mental wellness. But Pacoima isn’t just ground zero for Southern California’s homelessness crisis, it’s also an

epicenter of the state’s criminalization and mass incarceration crisis. Los Angeles spends more money incarcerating people from this one neighborhood than almost anywhere else, according to researchers at Million Dollar Hoods.

While preaching a gospel of personal responsibility and public safety, the Los Angeles DA’s office’s heavy-handed policies are undermining community safety by rendering children virtually irredeemable, exacerbating the homelessness crisis. It pursues a draconian “superpredator” prosecutorial strategy against youth who live in shelters, motels, cars, group homes, as well as those who are under the jurisdiction of a dependency court, according to criminal defense attorneys. By filing strikes against vulnerable minors, Lacey’s office intimidates homeless children into entering guilty pleas that require them to be incarcerated for extended periods of time, in exchange for dropping the strike that would ensure the transgressions of their youth haunt them well into adulthood.

For too long, prosecutors have been more than willing to use jails and prisons as a backstop to public policies that generate social inequality. Lacey is not the only one to blame; multiple generations of prosecutors have advocated for criminalization and incarceration, not only as a matter of policy, but also as a matter of politics. The dependable availability of incarceration allows other government actors to avoid confronting the underlying issues that have caused homelessness, such as the housing affordability crisis, the failure to create adequate and accessible community-based resources after the dismantling of psychiatric institutions, and the relabeling of issues surrounding substance use as criminal behavior thanks to the war on drugs.

Unsurprisingly, the political leadership in Los Angeles County does not think now is the time to change the status quo. With the Olympics coming in just eight years, the region’s growing number of people experiencing homelessness threatens to be a fly in the ointment. County Supervisor Mark Ridley-Thomas, a leader from South Los Angeles who serves as the appointed co-chairperson of a statewide task force on homelessness, has a plan to fast track a remedy to the crisis that took decades to metastasize. But his proposed solution calls for the construction of shelters as well as legal mechanisms that would obligate people to use them, regardless of whether they find them suitable to their needs.

At a recent forum, Ridley-Thomas rejected the term “criminalization,” but that appears to be what he and others want to do. He urged the Supreme Court to overrule a Ninth Circuit decision barring the criminalization of sleeping outdoors when there is no alternative, and he has suggested using involuntary commitment as a “civil” remedy to accomplish what can only be achieved now through a criminal process: the forced removal of homeless people from public spaces.

Ridley-Thomas says critics who question the wisdom of that plan are pursuing a “misplaced debate.” But the homelessness crisis in Los Angeles is the direct result of continuously misplacing any meaningful debate about the effects of criminalization and mass incarceration on its communities. Since the beginning of deinstitutionalization and the war on drugs, voters in Los Angeles have never seriously debated whether prosecutors should continue to use the criminal legal system as the default response to the fallout from other public policy failures.

Now, numerous reform-minded candidates have come forward to challenge not just Lacey, but the carceral policies her office practices. Both George Gascón, a former police chief turned district attorney of San Francisco, and Rachel Rossi, a former public defender, have different backgrounds and perspectives on criminal justice, but both have reached the same conclusion: The DA’s office needs to change course. Those progressive views are aligned with the Los Angeles County Democratic Party, which last month refused to endorse Lacey, opting for Gascón as the party’s standard bearer over the incumbent.

The candidates should embrace this long overdue debate. It’s not a coincidence that the county has the nation’s largest prosecutor’s office and the nation’s largest mental institution, which is integrated into its jail system. Prosecutors have long served as the gatekeepers to the jails and prisons, and they have been more than willing to enhance their own power by keeping the entrances wide open and the exits shut.

But as a form of punishment, incarceration does not enhance public safety when it is not balanced against its tendency to make a person’s unfortunate situation worse. The loss of autonomy, confinement to a crowded human warehouse, ostracization, stigmatization, disruption of the social safety net, job loss, loss of government benefits, exposure to random strip searches and infectious disease, and arbitrary, capricious, or violent “discipline” add up to a major life event. In California, we have only begun to account for what researchers increasingly refer to as the “harm amplification” of incarceration. But it has largely been in spite of prosecutors who have stood in the path of policy reform.

Although the district attorney’s office has adopted some reform-minded positions, it has done so reluctantly, and underneath the surface, the reforms are implemented to reinforce the status quo. For example, the office’s division of mental health diversion has been praised for taking a more compassionate approach to people with mental illness. But it allows the fundamental diversion decision to be made by a single prosecutor with no specialized knowledge in that subject.

Another example is the district attorney’s position on cash bail, and how it impacts people who are homeless. While Lacey’s campaign says she led the fight to end cash bail, the record shows she led the opposition to bail reform, partnering with special interests to promote a spoiler bill that preserved cash bail while adopting a system that strengthened the prosecutor’s power to detain people before trial. The effects of these decisions on the homeless population, in which Black Angelenos are over-represented due to historic and ongoing discrimination, is profound, and reflects an office that has not come to terms with the inextricable link between criminalization and racism in America.

The role of the district attorney is ripe to be reimagined by a public advocate who understands the power of implementing significant structural changes in the criminal legal system. Whoever leads the DA’s office next needs to recognize that real reform requires having a debate that political leaders have dodged for far too long. Changing course won’t be easy. But the homelessness crisis is all the proof we need that we can no longer afford to let the criminal legal system encroach into areas of social policy where it amplifies harm. Anything less will do little but to normalize the public policy catastrophe that prosecutors have been a part of creating.

Alex Sherman is a freelance journalist, activist, and attorney in Los Angeles, and his work has appeared in Interview, Billboard, New York Daily News and the LA Progressive. He is a member of the Los Angeles Coalition for DA Justice & Accountability.   Article originally appeared in the Appeal.