I was driving someone from out of the area a few weeks ago – a guest who was coming to Davis for the first time to speak at our event.  I’m driving down Covell and the van is literally bouncing on the road – which looks like it has been chewed up and laid back down.

“What’s wrong with the roads?” they asked, looking down trying to figure out why the ride was so uneven.

“We never really got money after the recession,” I tried to explain.

They looked incredulous.  Here we are in a nice, upper middle-class community with million-dollar homes and we can’t maintain our roads in a place where there is no snow and annual snow plows to chew things up.

If you want to understand how bad the roads are, drive on places like Covell or 5th Street, or Cowell or any other major thoroughfare in town where we have not in the last five years resurfaced the road.

Or if you want data to match your experience – the city has that too. 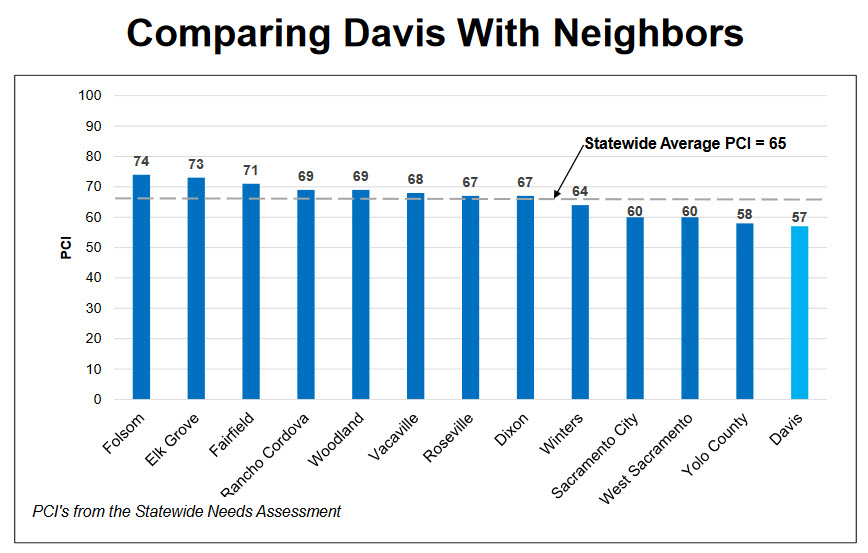 That’s right – roads are a problem statewide with an average PCI (pavement condition index) of 65.  That’s why the state is pumping in money to help solve that problem.  But Davis is worse than most.  In fact, as the chart above shows, Davis is worse than all of its neighbors – all of them.

How does that happen?

Dan Carson on Tuesday acknowledged that the city “got into this situation over many, many years and it will take some years to get out of this situation.”

He added, “Some of the work that we need to do to address these rather daunting numbers is just the things we’ve talked about, dealing with the city’s overall fiscal shortfalls, which we last

calculated at $8 million but know surely now is more than that.”

But we haven’t wanted to do that.  The city has created the funding for roads by carving it out of the general fund and now they are trying to do more.

I have had the experience of watching this unfold.  In 2009 and 2010, the Vanguard ran articles based on Bob Clarke’s presentation about the condition on roads to the council.  Those two articles drew no comments.

In 2011, I sat down with then-Mayor Joe Krovoza and Mayor Pro Tem Rochelle Swanson over lunch and walked them through the numbers.  That resulted in the council in 2011 putting $1 million into the budget for roads.

In 2013, Nichols Consulting re-evaluated the roads and found that the problem was not simply a $1 million a year problem, but a problem that was $100 million and could go much higher if the city didn’t act.

In 2014, while the council carved out $3 to $4 million for roads from the general fund budget, the council could not reach an agreement in either 2014 or 2016 to put a parcel tax on the ballot.  When they finally did in 2018, they put it concurrent with parks and failed to support the parcel tax with a robust campaign.  That left them at 57 percent support – short of the two-thirds needed for passage.

The council in my view had an opportunity to raise another $3 to $4 million by increasing the sales tax to 1.5 percent, but declined to consider that option.

I continue to note that the city council has been overly cautious in this regard. This year, despite polling numbers for the sales tax renewal in the 71 to 77 percent range for a measure that requires 50.1 percent of the vote, they refused to consider a half cent increase that could have generated another $3 to $4 million and closed that roads gap.

So where is the money going to come from?

As Rich Rifkin put it in his latest column, “in reality, our roadways are worse now than they were a little over a decade ago. And, despite new funding from the fuels tax, it is likely they will deteriorate more in the decade ahead.”

How bad? In 2009, the PCI was 71 for the city. At the time, that seemed subpar, but it now looks downright rosy. And it probably was not a true 71. When Nichols Consulting reevaluated the roads in 2012, they had fallen to 62. While that seems like a sharp drop in just a few years, the reality is that they evaluated the streets in a much more rigorous manner.

As Mr. Rifkin points out in his column, “we are now on the low-end of fair and headed toward poor. We already have 80 streets or street segments that Nichols determined are in a ‘failed’ condition. Davis (57) is below the statewide average (65) and worse than all nearby cities.”

To fix this problem is going to be costly.

Staff notes, “In order to reach the target PCI values set by City Council in 2013 (68 for arterials, 65 for collectors, 60 for residential/local streets and 68 for bike/multi-use paths), the analyses indicates that the City needs to spend approximately $7.9 million per year on streets and $3.9 million per year on bike paths over the next 10 years.”

Nichols Consulting Engineers once again was selected by the city in 2019 to update the Pavement Management Program (PMP). The PMP’s goal is to achieve as close as possible to the target PCI values set by the council in 2013.

Staff warns that “these targets are not always achievable because transportation maintenance funding has been a growing challenge for communities across the country for many years. If the budget is too low, it may not be possible to maintain the entire pavement system to an average pavement condition, but only a portion of the system.”

It is good that the council is creating a subcommittee on this – too bad the 2009 council didn’t do that, or maybe we wouldn’t be here right now.  Can’t say the warnings were not there.  We just didn’t heed them.

61 thoughts on “Monday Morning Thoughts: The Chickens Have Come Home on Our Roads”