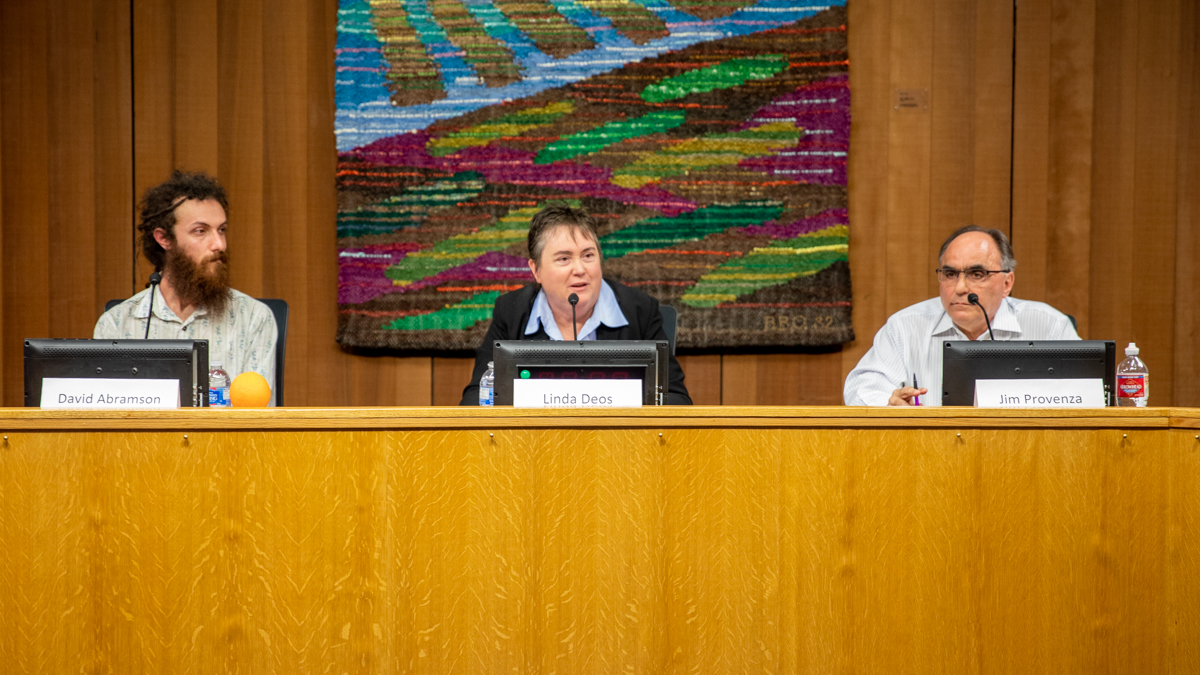 This is part of three of the League of Women Voters forum on the 4th District County Supervisor race, featuring incumbent Jim Provenza and two challengers – Linda Deos and David Abramson.  They met on Sunday at the Community Chambers.  The forum was moderated by Michelle Famula, retired head of student health services at UC Davis.

Question 6 – If elected what would you do to promote the development of affordable housing while protecting farmland and open space?  Is there a role for the county in meeting UC Davis student housing needs? 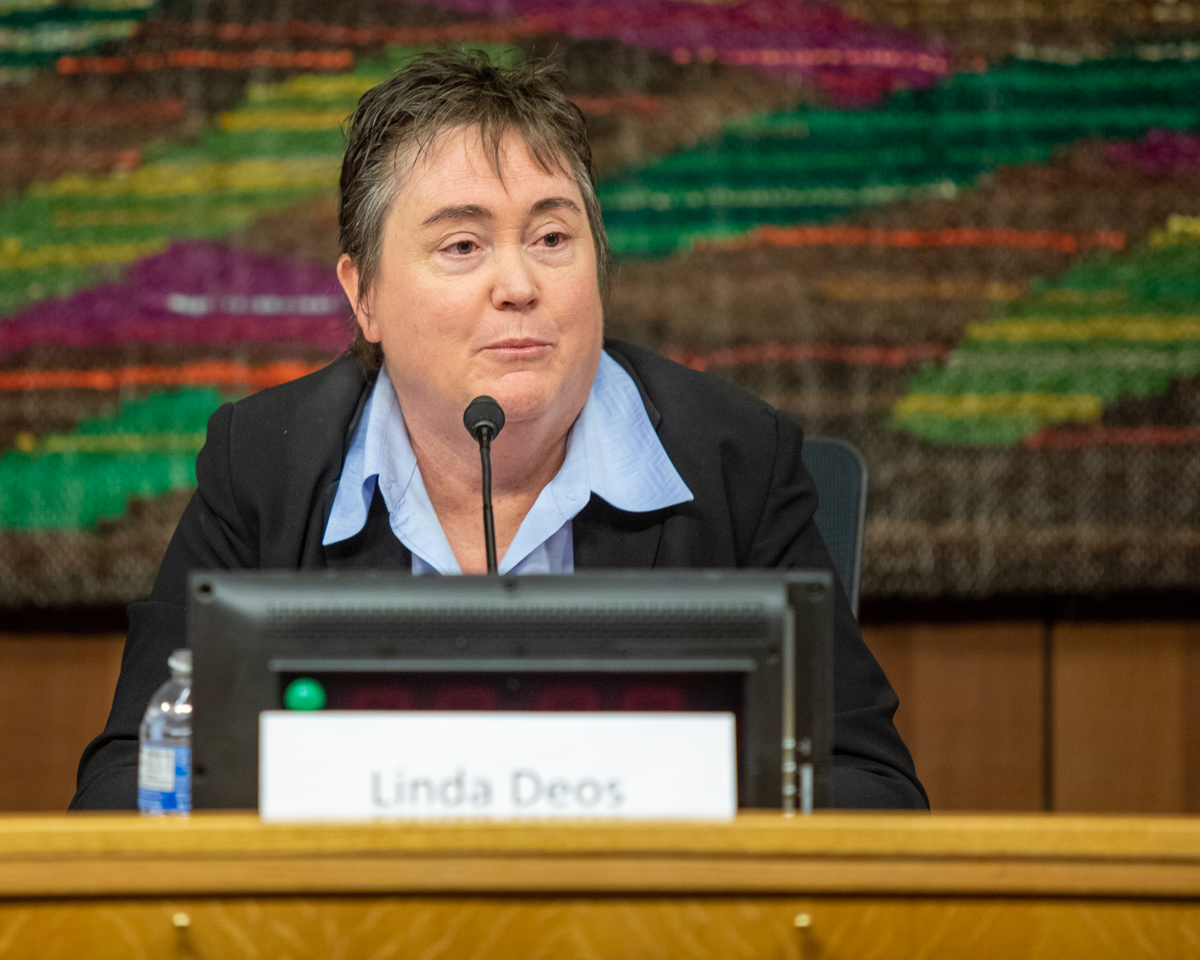 Linda Deos: Housing is probably the number one thing I hear as I’m talking to voters through out the district.  Affordable housing specifically.  What are we going to do about that?

I know that when my wife first moved to Davis, she was in a split lot duplex.  I think you rented a loft first, then went to a split lot duplex and now we own our home.  But we don’t have those entry-level ways of coming in anymore.  The County General Plan itself has always put housing needs, housing development within each city and said you guys do what you’re going to do within each town.

What we have is we have unincorporated towns within the county.  Think of Esparto, Guinda, or Knight’s Landing, Clarksburg places like this.  That are directly under the county jurisdiction.  Right now there were a couple of subdivisions that were approved to be built in Esparto.  That approval happened several years ago before the financial crisis.  They were put on hold because no one was going to build during that time.

The county entered into agreements with them – we need to go back and look at those again.  Let’s not go with the same agreement we had with them from 10, 15, 20 years ago.  Let’s instead look at some environmental issues – are they going to build carbon neutral?  Are they going to be building affordable?  What are some of the things that can be done that are directly within the county’s jurisdictions to do something about. 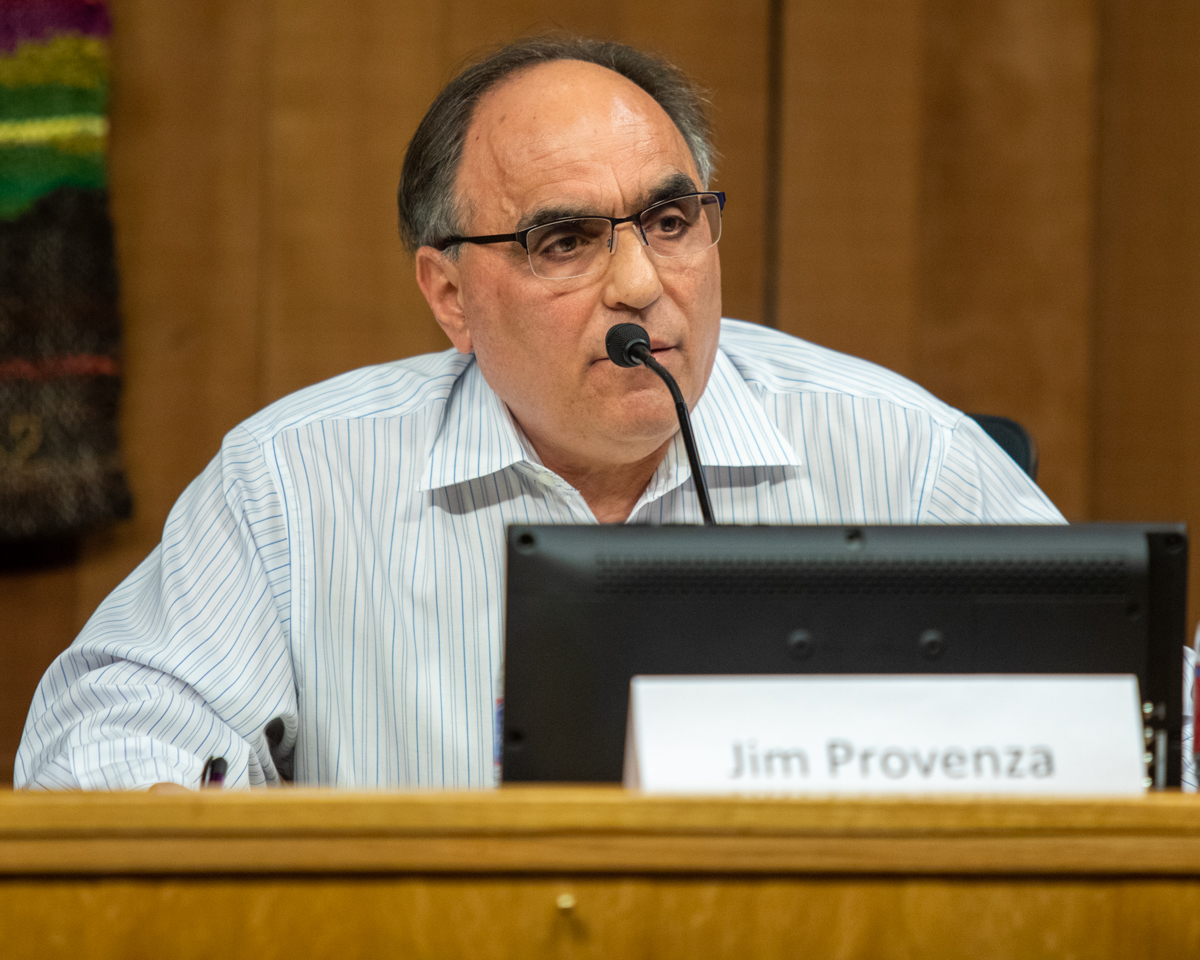 Jim Provenza: The County will require energy-efficient standards including solar panels in new houses – although that’s required by the state under new rules.  We think having enforceable county standards is still important.  To create housing – I mentioned the 2 by 2 by 2 and the agreement with the university.  That was a tremendous boon to Davis housing.

But the other things we do is encourage it near cities.  Why?  We don’t want people commuting long distances to some hopscotch development out in the middle of nowhere for their housing.  We don’t their housing to be close to where the jobs are and to seek jobs-housing balances.  The land around the city – much of it is county land.  We are working in partnership with the city of Davis when they have a project to make sure that county standards are met.

We should also insist that the housing be done in such a way that it is affordable to as many people as possible.  We have a lot of influence there.  We can do some things in the rural areas but again it’s not the solution because it’s so far from jobs and that’s contrary to our environmental and carbon reduction goals. 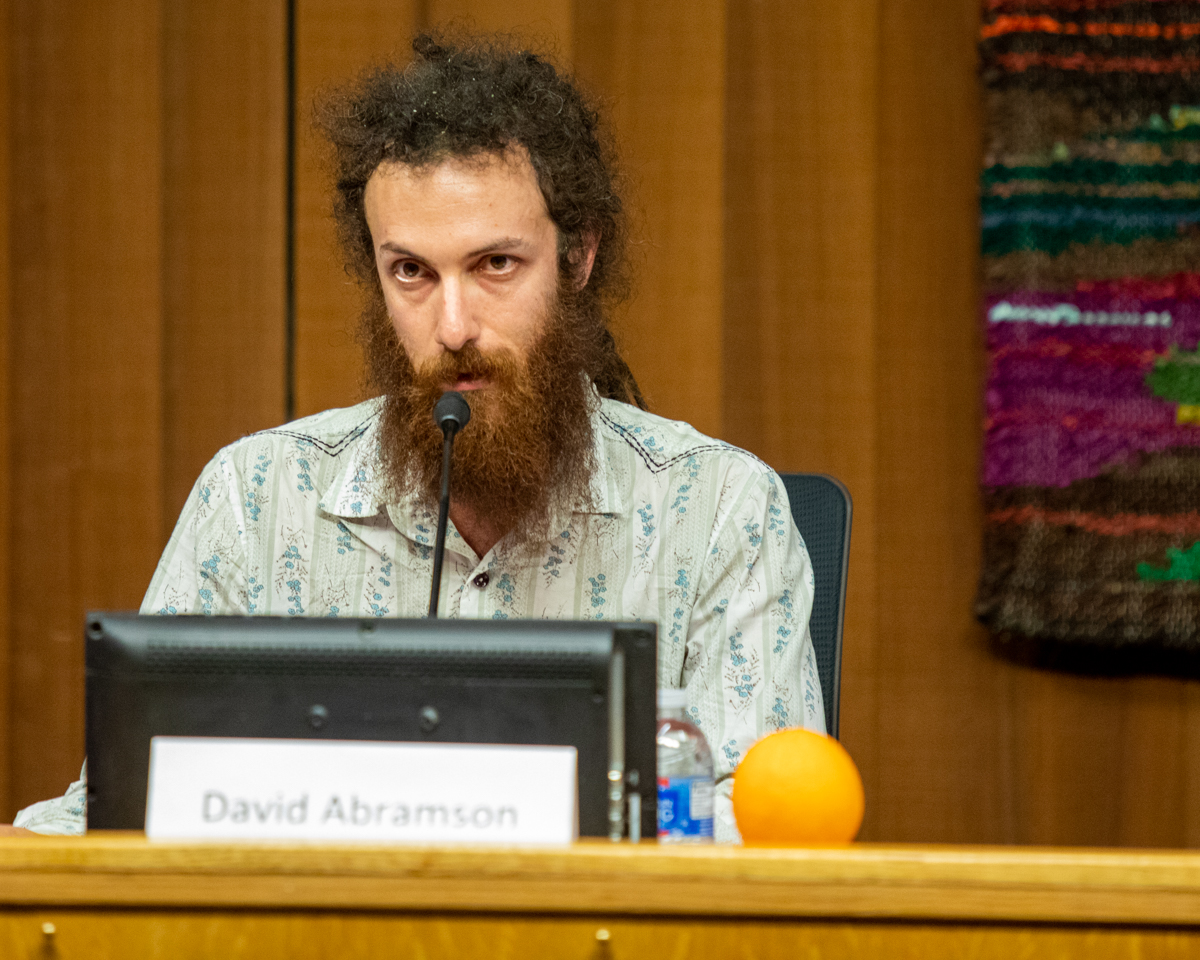 David Abramson: I’m a renter and every month I spend roughly 50 percent of my income in rent.  So many people that I’ve talked to it’s been the case.  Davis it’s about 50 percent renters.  People who are renters and students are also doubly vulnerable because they don’t have the time to work enough to pay for a $1800 apartment.  It’s such a huge problem and I don’t think we’ve had renter representation to the standard that we need.

We focus so much on luxury development – you look at all these need developments in Davis in particular – it’s all luxury development.  Developers are paying into these in lieu fees, in lieu of building the requisite affordable housing units.

I would do everything in my power if I were elected to close these in lieu loopholes and work with developers that are going to fulfill their obligations.  Agree with Jim about this transit oriented development and where we have services within walking and biking distance – and we’re really thinking about how we develop in a way that’s in line with our climate necessities and carbon goals.  Carbon neutral.  And focusing on infill.  With a net zero target. 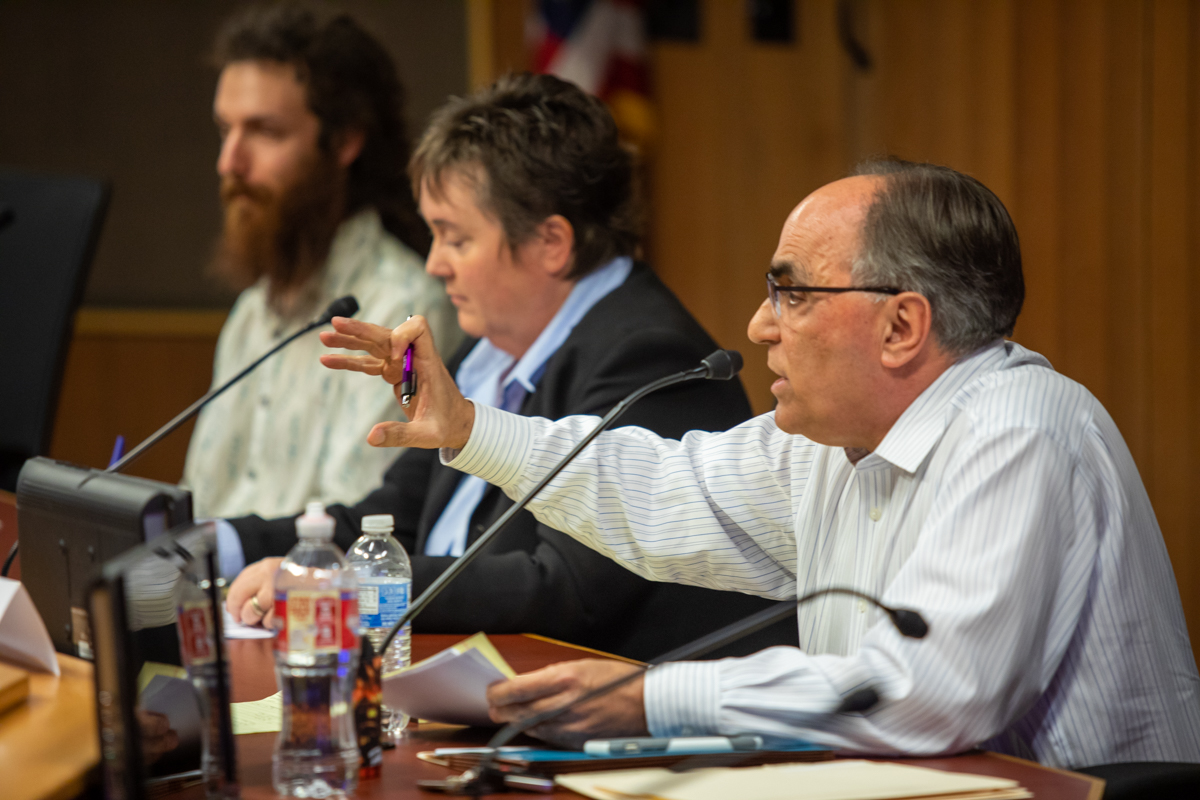 Jim Provenza:  I’ve worked on water issues since my time I’ve been on the board and they’re very complex and very controversial.  For example the state, in order to mitigate for all the water that they ship south, they kill a lot of fish, so they have to mitigate – they propose to do that in our county.  They wanted to flood into the Yolo Bypass.

They’re going to do that project.  We’ve challenged it in several ways.  We did several studies and we were able to show that if they terminate the additional

flooding prior to March 15, that won’t impact the rice growing.

The prior plan going to June 15, it would have potentially completely taken out our rice industry.  So we negotiated a solution to that that provided for earlier flooding so they could take care of the fish population and do habitat there but not affect the Yolo Wildlife and its bird population because that additional water is going to affect them and not take out our agriculture.

I’m on a groundwater sustainability agency we actually have a good groundwater supply in Yolo County compared to other areas and our Yolo Conservancy is taking steps to limit the amounts of certain crops that are not conducive to protecting groundwater such as the vineyards and orchards – on a voluntary basis because people accept money in order to do these conservation easements. 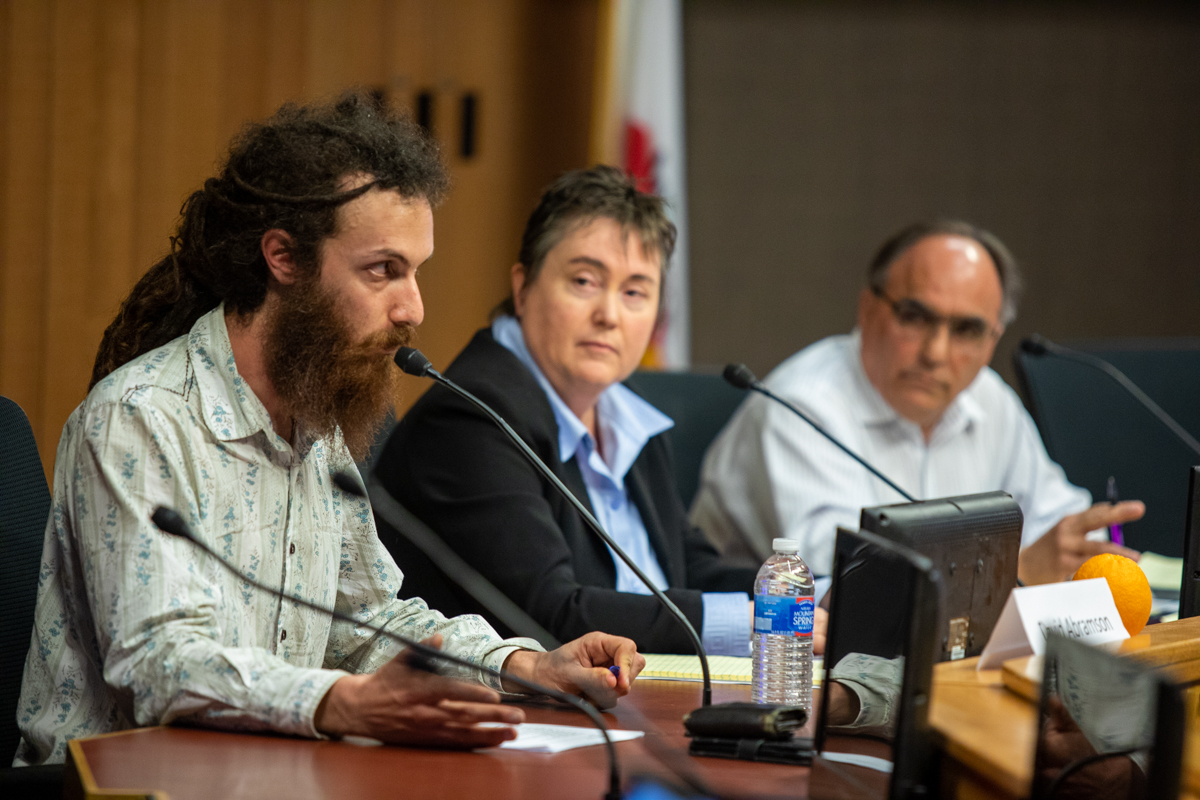 David Abramson:  When I was at standing Rock, I learned this phrase – mini lechoni- which means ‘water is life’ and I’ve really been thinking about that ever since then.  When we talk about water, we really need to talk about who speaks for the water in our government.  What rights does our water have from pollution.  We really need to view water as a living being.

The land known as California now, used to be a land known as the ‘garden of Eden,’  there were drinkable rivers, there were billions of birds and wildlife, we’ve really reduced that largely through poor agricultural practice and extraction.

One principle I’ve learned while studying permaculture is the problem is the solution, when it comes to agriculture, we can help farmers learn practices that can regenerate groundwater.  Every one percent of soil organic matter, can hold 15,000 gallons of water – reusable water – so all these regenerative agricultural practices are habitat friendly, so for me it’s not necessarily almonds or tomatoes, it’s how we do the practices.  We need to think in terms of ecosystems and resiliency.

Linda Deos: Water is an issue.  Of course water is life.  We have to recognize as well that we’re doing a lot of work here on groundwater, monitoring and making sure that we have sufficient amounts for us going forward.

We have two water systems here in the county.  We have the surface water – the canal system that we see.  And we also have our groundwater.

As Jim said, our groundwater reserves are looking pretty good.  But an issue we have however is it’s voluntary as far as our farmers taking groundwater out – up for their crops.  It’s voluntary.  Whereas Central Valley areas, they are under stringent requirements to only take out so much.  I’m concerned about that going forward.  Maybe we need to look at tightening up those restrictions.

As far as crop growing, we have certain crops that we’re growing and I think we’re all watching the number of orchards going up be it pistachios, almonds, etc.  That does change with the type of the water usage there is.  We can’t really do anything to stop the farmers from planting something else.  We don’t have that power.  I’d like to think that we could, but we just don’t.

With regard to the Yolo Basin, I’m on the Yolo Basin Foundation Board, we’re very concerned about this flooding of the basin.  Very concerned in that we’re not looking and taking care of the wildlife.  That we’ve mitigated to help our rice farmers, but not necessarily mitigated for the wildlife that people come out to enjoy and that we need – we’re part of the Pacific flyway.