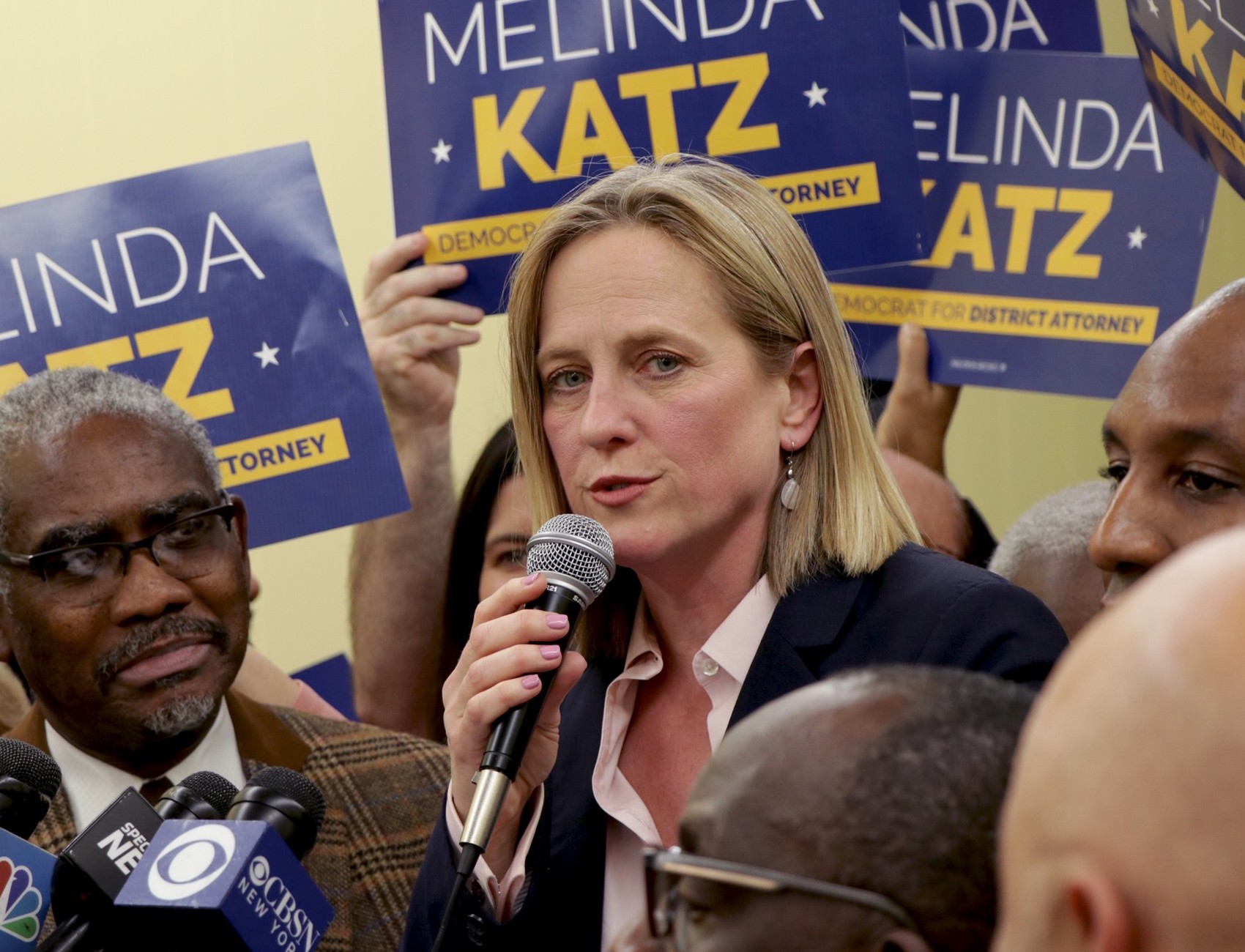 Melinda Katz, who was inaugurated Monday, is facing criticism over what some say is a broken campaign promise.

After less than a week on the job, Melinda Katz, the newly elected top prosecutor in the New York City borough of Queens, is facing accusations that she has broken her campaign pledge to end all money bail.

On Wednesday, the day Katz took office, an assistant district attorney requested cash bond for defendants arraigned on robbery and criminal contempt charges. During a protest Friday outside a Queens courthouse, a reform advocacy group called cash bail “wrong and unacceptable.” A handful of protesters demonstrated again Monday afternoon, outside the venue where Katz was set to take the oath of office.

“I would like to think she would hold to her word,” Peggy Herrera, a volunteer with CourtWatchNYC, a court watchdog group, told The Appeal. “It’s time we stop putting a price tag on freedom and start investing in our communities.”

In her inauguration speech Monday evening, Katz said she intends to uphold a campaign pledge to transform the criminal legal system, which includes a promise to end money bail.

“My office is committing to ending cash bail in all forms, period,” Katz said Monday evening during an inauguration speech at St. John’s University in Jamaica, Queens. She took over the Queens County district attorney’s office on New Year’s Day.

Katz explained that ending money bail was “not achievable on day one of my administration,” she said, because the infrastructure needed for expanding supervised release was not immediately in

“We cannot keep using a system that is discriminatory and incarcerates people who have not been convicted of any crimes, which has devastating effects on far too many families in our borough,” Katz said in her speech. “Our old system was based on letting people out of jail if they have money and keeping them in jail if they didn’t.”

A spokesperson for Katz’s office did not respond to a request for comment about the DA’s money bail policy.

Katz has pledged to “end cash bail completely,” and said she would only seek a defendant’s remand to jail if that person is deemed a threat to public safety.  Her campaign website also reflects this pledge. Early in her primary campaign, Katz appeared to support ending money bail for misdemeanor offenses only.

“She should be held accountable if she promised never to ask for cash bail,” Robert Gangi, executive director of the Police Reform Organizing Project, another court watchdog group in New York City, told The Appeal.

However, some reform advocates and public defenders in Queens told The Appeal it was too soon to declare a betrayal in the first few days of the year, so soon after the state’s new bail law took effect.

On Wednesday, a new package of justice reforms went into effect in New York State, including a law that limits when a prosecutor can seek bail for defendants charged with most misdemeanors and nonviolent felonies. If the law is implemented as intended, over 90 percent of people criminally charged in New York will be released pretrial without bail and ordered to return to court at a later date. But judges still retain the authority to set bail for violent offenses and some nonviolent felonies.

“These new laws are fabulous, and we’re excited to see what’s going to happen in our new criminal justice system,” Lori Zeno, executive director of the Queens Defenders, a public defender agency, told The Appeal in a phone interview. “Honestly, attacking Melinda on day two isn’t something I’m interested in doing.”

Katz has defended the law from attacks. In a November press conference, prosecutors in nine New York counties, including then-acting Queens DA Jack Ryan, warned that New Yorkers should “prepare themselves for literally thousands of criminals back in their community.” In a statement released in November, Katz said Ryan and others had engaged in “unfortunate fear-mongering.”

But six days after the new bail law took effect, Democratic leaders in the city and across the state are divided over whether to amend the legislation. New York Governor Andrew Cuomo and New York City Mayor Bill de Blasio said they support revisiting the law in the wake of a spate of violent antisemitic attacks across the region. New York Attorney General Letitia James—who, along with de Blasio, paid tribute to Katz at the inauguration Monday—said over the weekend that “there have been some individuals that have unfortunately been released under the new bail reform,” and suggested revising the law.

Gangi noted that advocates worry the new law could push prosecutors to seek more serious charges in order to hold people on bail.

“What we advocates want is a virtual end to pretrial detention,” Gangi told The Appeal. “The concern is that the police or the DAs will willfully overcharge and bring people in whose charges do not qualify for release. But right now, it is too early to tell.”

Michael Gianaris, a state senator who represents Queens, was an early backer of bail reform and shares Gangi’s concern. “Prosecutors have discretion [on] what they charge,” he said in December, according to The City. “That’s just something we are going to have to stay on top of and make sure it doesn’t happen.”

In November, Katz became the first woman elected to serve as DA in Queens County, which has an estimated population of 2.3 million residents. In a hotly contested June primary election, Katz beat former public defender Tiffany Cabán by just 55 votes, after a lengthy ballot recount process.

Richard Brown, Katz’s predecessor who died in May, had served as DA for nearly 28 years. Although Katz has promised sweeping changes to the DA’s office, she announced on Monday that her nine-member executive leadership board will include four veteran assistant DAs from the Brown administration.

Before she took over the office, Katz announced in a Dec. 24 statement that she would end a Brown-era policy requiring defendants to waive their speedy trial rights before the office would engage in plea negotiations. More progressive policy changes could follow, Katz said in the statement.

Katz will also create Queens’s first conviction integrity unit (CIU), a division meant to root out prosecutorial misconduct and exonerate people who have been wrongfully convicted. Every DA primary candidate, including Katz, promised to create the unit. Her office’s CIU will be led by former Innocence Project attorney Bryce Benjet.

The CIU offers hope to people like Carlton Roman, a Queens man serving a 43-years-to-life prison sentence over a 1989 fatal shooting that he denies committing. Roman’s legal team has alleged that Queens prosecutors failed to turn over evidence, including 911 tapes that they say raises questions about the police timeline of the shooting.

James Henning, an attorney for Roman, told The Appeal that the legal team has secured a recantation from a key case witness. It is working on a new motion that it hopes to get in front of Katz’s CIU soon, Henning said.

“This would be a great one for [Katz’s office],” he said. “They could really deconstruct a bad case from a bygone era and really jumpstart their review unit.”

Article original appeared in the Appeal

Share:
Tags:Bail ReformMelinda Katz
Previous : Will the Third Time Be the Charm for SB 50?
Next : Senator Wiener Announces Revised SB 50, with New Local Flexibility Option for Cities, as Well as New Endorsements