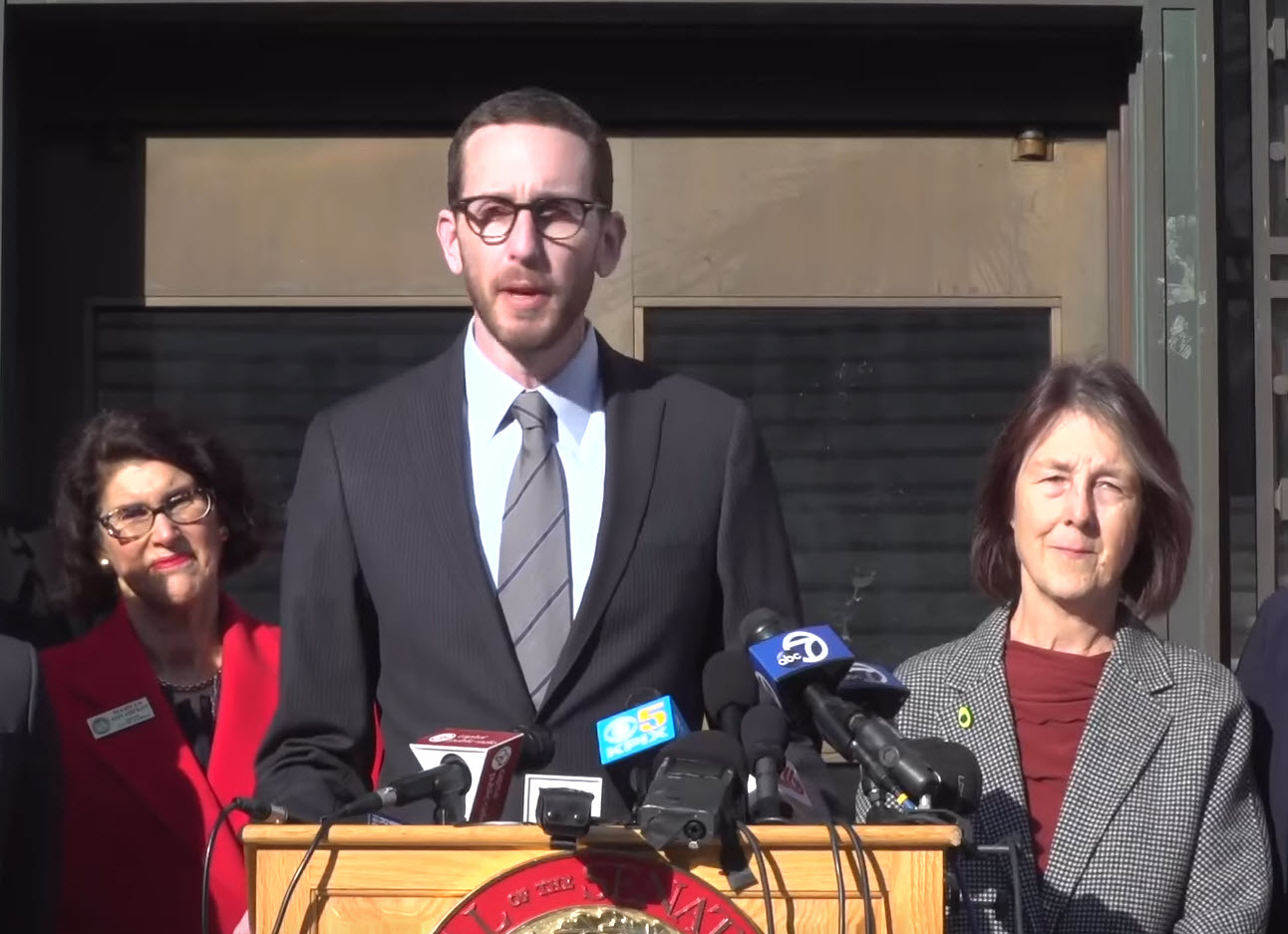 (From Press Release – Senator Wiener) – On Tuesday, Senator Scott Wiener (D-San Francisco), joined by co-authors and sup-porters, announced new amendments to Senate Bill 50, the More HOMES Act (Housing, Opportunity, Mobility, Equity, and Stability). The amendments allow for more local flexibility in how best to implement the legislation. Specifically, the amendments create a two-year delayed implementation period for the legislation, allowing cities to craft their own alternative plans that meets the goals of SB 50. If state agencies confirm that a city’s proposed alternative plan is sufficient, then the alternative plan will govern at the end of the two-year delayed implementation.

Regarding the local flexibility option, cities will be able to craft zoning revisions that vary from SB 50’s specific provisions, as long as those alternative plans meet SB 50’s goals of zoning for

significant new housing, and they focus that housing sustainably. SB 50 is designed to increase housing production — California has a 3.5 million home shortage — by increasing zoned density

(legalizing apartment buildings and affordable housing) near public transportation and job centers. Under SB 50, cities will not be able to limit density near job or transit centers, and will be required to allow small and mid-size apartment buildings.

Under today’s amendment, cities will have two years to adopt their own re-zoning that differs from SB 50. For example, cities will now be able to build taller in one area but shorter in an-other, or denser in one area but less dense in another. This new flexibility, however, will not be unlimited and will have to comply with several basic principles. Specifically, alternative local plans will have to: (1) zone for at least as much housing as SB 50 would zone for; (2) not in-crease vehicle miles traveled (VMT) by de-linking housing from jobs and transit and thus creating sprawl; and (3) not violate fair housing principles, for example, by concentrating new housing disproportionately in low income communities and communities of color while having less density in wealthier neighborhoods.

In addition, if a city that crafts its own alternative SB 50 plan has voluntarily zoned for more density in the past 20 years, the city’s numerical housing obligation will be reduced by the amount of additional housing zoned for by that previous rezoning. In other words, cities will receive credit for past voluntary re-zonings.

Today’s amendments do not impact SB 50’s strong affordability provisions, its strong tenant and anti-demolition protections, its delayed implementation in sensitive communities, or its statewide fourplex provision. SB 50 guarantees that up to 25% of units must be affordable, it protects tenants by restricting demolitions of sound housing, and it has a five-year delayed implementation in “sensitive communities” (low income communities at risk of gentrification). It also provides fourplex zoning (allowing duplexes, triplexes, and fourplexes) statewide.

According to Senator Wiener:

“California’s massive housing shortage is taking a huge toll on our state’s residents. Young families are being pushed out, kids can’t come back to live where they grew up, people are being pushed into homelessness, evictions are spiking, and we’re seeing a surge in super-commuters who clog our freeways and increase carbon emissions as they spend hours a day on the road. California’s housing shortage threatens our economy, our environment, and our quality of life.

“SB 50 addresses this crisis head-on by requiring cities to allow more housing and by focusing that housing near jobs and public transportation, instead of building more and more unsustain-able sprawl. These new amendments recognize that cities should have some flexibility in how they implement SB 50’s goals. We’ve spent enormous time and energy speaking with and receiving feedback from a broad array of stakeholders, including local governments. We’ve heard loud and clear that cities want the flexibility to implement this kind of legislation in a way that works best for them. The amendments allow cities this flexibility while ensuring that any local

“Jobs and transit-rich communities like mine need to stand up for future generations of Californians by building the housing our residents critically need today. It is far too hard to build housing in wealthier communities, and too easy to continue the urban sprawl that has created un-reasonably long commutes, increased congestion, dangerous fire hazards, and carbon emissions that impact us all. This bill allows local communities to tailor plans to their unique needs while putting an end to the failing status quo. If we are serious about addressing our housing crisis and curbing greenhouse gasses, we need to come together to pass SB 50.”

“The City of Carson is leading the region in transit oriented housing to ensure for the long term economic viability of the entire region. As such, we strongly support SB 50 and efforts to make sure housing is available and affordable for residents where we work, play and want to live.”

“I want to reiterate my strong support for SB 50, including new amendments which allow for more local flexibility in how this bill is implemented. This landmark legislation is another tool to help city’s like Stockton tackle our housing affordability crisis. California’s housing shortage has pushed rents here, locally, to some of the highest increases in the nation. By eliminating some zoning restrictions near job centers and transit hubs, SB 50 will help to grow housing units, re-duce work commutes and improve our environment. That’s what I call a triple win!”

Cesar Diaz of the Building Trades said the following:

“We thank Senator Weiner for his steadfast commitment to finding common ground among stakeholders in order to solve the state’s housing crisis. SB 50 represents a partnership be-tween market-rate and affordable housing developers for project delivery, building trades un-ions to provide the skilled workforce and apprenticeship opportunities in construction, and lo-cal communities in desperate need of housing. “

“California has an affordable housing and homelessness crisis. Land near transportation hubs that help people get to school and work is precious and scarce. When the opportunity to build on these premium locations arise, we must find a way to maximize the space; otherwise, our transit dollars will be wasted, and the land is under-utilized.”

“The changes we’ve made to SB 50 give cities a broader menu of options that help them take a leadership role in solving the housing shortage,” said Brian Hanlon, President and CEO of California YIMBY. “Cities that want to stay ahead on this issue can make their own plans for how they add homes to their communities, while cities that fall behind will be subjected to the bill’s specific requirements. This gives cities all the flexibility they need to be a part of the solution.”

Three statewide polls in 2019 show the legislation has support ranging from 61% to 66%.

Senator Wiener introduced SB 50 in December 2018. In April 2019, SB 50 was passed by its two policy committees – the Senate Housing Committee and the Senate Governance and Finance Committee in nearly unanimous bipartisan votes. In May 2019, the Chair of the Senate Appropriations Committee delayed SB 50 until January 2020. The deadline to pass SB 50 out of the Senate is January 31, 2020.

Not mentioned in the press release from Senator Wiener’s office were press accounts that as Senator Wiener and his supporters conducted their press conference, an activist group known as Moms 4 Housing chanted, “Hey hey, ho ho, luxury housing has got to go” and “Where’s the affordable housing?”

Wrote the San Jose Mercury News: “The clash between two pro-housing groups — both of which believe the Bay Area faces a crippling affordability crisis but disagree over how to fix it — symbolizes the contentious nature of the California housing debate.

“It also highlights the polarizing aspects of the proposed legislation and sets the stage for a tense campaign as Wiener races to push the bill through a Senate floor vote by the Jan. 31 deadline.”

The protesters are worried the bill will allow too many luxury homes to be built and not enough affordable housing.

Senator Wiener believes otherwise arguing, “SB 50 will be a huge boon for affordable housing.  I have to be clear about that.”