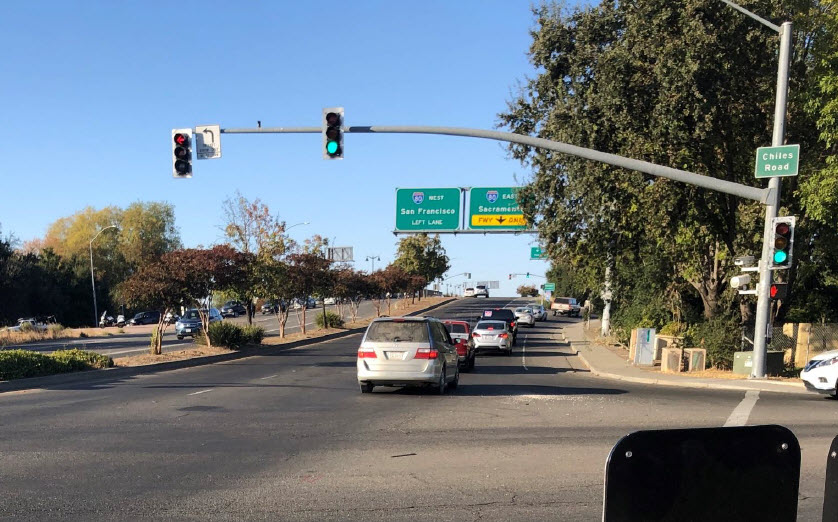 When the issue of fixing the Mace Boulevard redesign finally went before the city council, they went with a compromise – attempting to keep the bicycle-friendly design of Mace while restoring two vehicle travel lanes in a critical northbound stretch south of Cowell and north of Montgomery.

The hope was that they could improve the travel time for those traveling locally in Davis, while avoiding getting caught up in the back up that was occurring off I-80.

While the plan put forward by council makes sense, we continue to believe that the primary problems with the road are not with the redesign and rather with changed circumstances on I-80 leading to back up, and also vehicles that are using directional apps to circumvent some of that freeway congestion and using Mace as a cut through on their way back to the freeway.

The last several times I drove through the once-problematic intersection of Mace and Cowell during prime hours on Thursday and Friday afternoons there has been a whole bunch of nothing in terms of traffic congestion.

On Thursday around 4:30, it was free and clear, not just on Cowell headed eastbound – which at times has been a bear, but also on Mace with only a small amount of traffic waiting to get onto the freeway and no back up at the Mace-Cowell intersection.

On Friday just after 5 pm, Cowell was clear, but there was a back up of traffic on Mace headed northbound – not horrible, but probably something that would be helped once they expand the lanes back

to four south of the intersection.

The explanation for this? Well, talking to Darren Pytel on Thursday, he didn’t know.

He said, “I just left a Mace meeting and we were trying to figure out why that is.”

He added, “One theory from the consultant that makes most sense is much of Bay Area construction is on hold because of weather. That reduces a lot of commuter freeway traffic along entire corridor. Bad news is it will pick up again soon.”

One more thought, “Also repeated weekend storms have cut down on skiing so far.”

That is not encouraging, but a few things are.

Right now during peak hours, the city estimates that there are about 200 vehicles per hour – that might be a low number – which are using Waze or other apps to cut through using Tremont to Mace as their route back to the freeway.

When traffic is down on the freeway, we see the benefit on both ends.  There is less back up trying to enter the freeway and less cut-through traffic diverting onto Mace in the first place.

We have already seen in recent weeks how those two reductions interact to reduce the problems on the entire corridor.

In the short-term, the goal will be to redesign Mace by adding capacity – but perhaps more importantly give those who live on or around Mace the ability to bypass the congestion and head into town rather than toward the freeway.

Thus, once the city implements the tweaks to Mace, that could free up traffic most of the time and make the road usable even during peak hours for local traffic.

Second, by utilizing signaling, we can hopefully spread out the traffic enough to avoid the local congestion. We might not be able to do anything about the freeway on-ramp, but if it doesn’t clog traffic locally more people will be able to live with it.

Adrian Engel of Fehr & Peers explains.  One way to improve flow is new traffic signals along the corridor that can “help meter some of the traffic that’s coming from the south and create gaps in that traffic,” and “it can help control the flow so you can monitor the flow in a progression through some of the intersections.”

All of this does show that the problem is more about the freeway than the road redesign. The redesign would have been fine had we maintained the level of traffic from 2013. It was the increase in traffic from the freeway as well as diverted traffic from Waze that was the real source of congestion.

One of the dangers that exists is if they can speed traffic up on the Mace corridor it could actually invite the apps to divert more traffic onto Mace, thus increasing the problem.

As Adrian Engel pointed out in October, they have found that at least 200 cars per hour are getting off the freeway in Dixon and taking Tremont Rd. east to Mace, then going north on Mace in order to get onto the freeway – that is taking about 13 minutes in their model.

He said, “What we’re seeing it’s about a 10 minute difference.” So by getting off at Dixon and instead of traveling east on 80, the vehicles are saving about 10 minutes of time.

He pointed out, “Anything that we do along this corridor to make it faster to get up Mace from south of Montgomery all the way up to the freeway will potentially draw more traffic off of 80 onto Mace.”

The solutions they want are to get help the local community get through Mace better, “but dissuade some of the regional cut through traffic that’s using Mace as a bypass for 80.”

In the meantime, the alleviation of congestion on Mace, along with proposed changes that will come later this year, should hopefully lower the temperature on this issue.

I’m hoping people start to notice this for a lot of reasons – but a main thing is we should call this the I-80 mess, not the Mace mess.