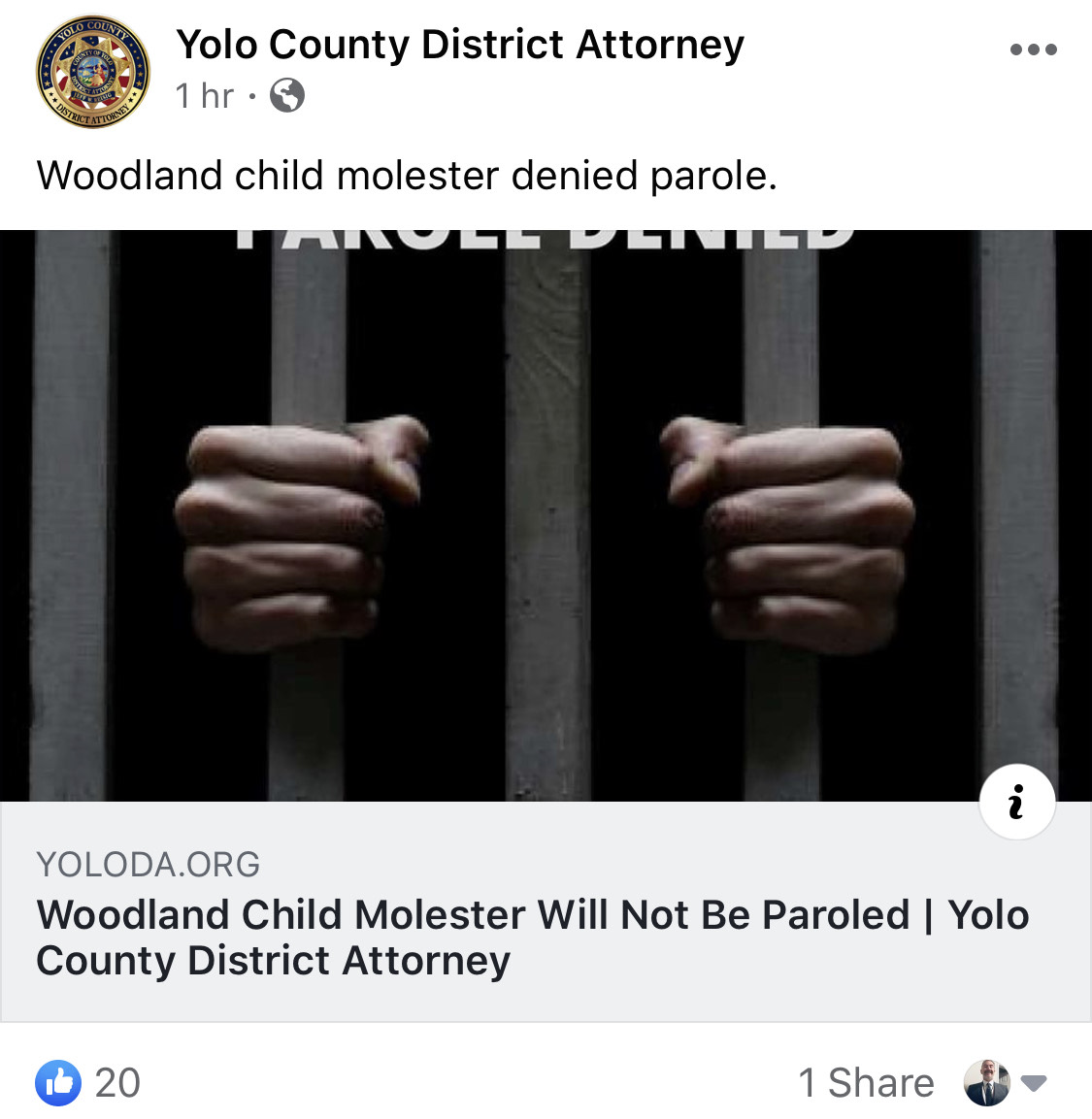 A press release by the Yolo County DA’s Office and its accompanying Facebook post drew our attention late this week.  Under the banner “Child Molester Parole Denied,” the DA’s office at the same time celebrates the fact that they were able to prevent the release of a man who has served 22 years now after an original 15-year to life sentence and depicts him in dehumanizing terms.

The press release actually raises quite a few different issues that we will address shortly.

In their press release, the DA notes that evidence was found which linked Mr. Ward to two young girls whom he had photographed and molested. And he has admitted molesting numerous other children in Woodland.

In denying Ward parole, Commissioner Minor stated that Ward “still poses an unreasonable risk to public safety.” She continued listing the following reasons for the decision: Ward was unable to control his behavior before being incarcerated, he continues to minimize his role in the crimes, he has a lack of insight to the causative factors, he has a poor relapse prevention plan, he doesn’t understand the grooming behavior he utilizes, and he has unrealistic parole plans.

We don’t have a lot of facts here based on the release.  We know from previous press releases that the DA often will color the information it does release to its perspective.  A few months ago, for instance, they issued a release on a parole that was granted over their objection, and the Yolo County Public Defender’s Office released their own story that was quite different.

The public defender’s office told the Vanguard they were not involved in the Michael Ward case post-conviction. But what the DA doesn’t mention, of course, is that Mr. Ward is 77 years old.

One of the points that NYU Law Professor Rachel Barkow made last summer when she spoke at UC Davis is that criminal justice reform has only scratched the surface.  In order to really reduce the prison population, we have to move beyond low hanging fruit of non-violent, non-danger, non-sex offenders.

The Sentencing Project points out that the risk of re-offense by people as they age greatly reduces.  We have not been able to get ahold of the risk assessment in this case, but the risk of a 77-year-old man – who will be required to register as a sex offender and who will be on parole for three years after release – gaining access to children and harming them seems fairly remote.

But without fully understanding the assessment, it is hard to hammer either the parole process or the DA’s office – other than to point out that we were told a few months ago that, of the cases where the public defender’s office has worked with the parolee, the Yolo County DA’s office has opposed all but one for release.

But, leaving that issue aside, what troubles one, beyond the facts of this case and whether they merit denial of parole, is the nature of the DA’s Facebook post.

“Woodland Child Molester denied parole,” the caption reads. More ominously are the hands grasping the bars and “parole denied” on the caption.

Experts have long worried about the dehumanizing effects of such messaging. Experts note that being tough on crime means preventing it, but it does not mean we should dehumanize prisoners.

As one article notes: “Debates about people who have committed crimes are littered with epithets. We brand people as offenders, criminals, crooks, felons, convicts, lawbreakers, outlaws, and delinquents.”

The article further notes, “In many other social areas, we have moved away from this kind of labeling…. So why use epithets in the area of crime?”

The article notes that, among other things, the branding can be effective.

They further add: “Another reason that epithets seem justified, some might say, is that anyone who has committed a crime is responsible, unlike someone with disabilities or someone living in poverty. The argument goes that people who offend are blameworthy, culpable, and liable to punishment, so we do them no injustice when we classify them by their offense, even if that offense is a one-off. But this thinking is wrongheaded.”

But leaving aside the labeling of a man convicted 22 years ago of a bad crime as a child molester, we have often, when digging deeper into the DA’s press releases, noted the lack of nuance in their descriptions – and lack of accuracy in their account.

But here the most offensive part of this account is the DA is celebrating. Parole denied!  Victory.  Touchdown. Dehumanizing. Lack of context.

The parole board may be right, but in this day of criminal justice reform we should expect a bit more restraint with the local DA.

It seems that a reasonable person might ask whether a 77-year-old man who has already served 22 years is really a threat to recidivate at this point and whether we have better options than to continue to incarcerate. But we should at the same time ask that the DA’s office – while we may differ on judgments of risk – be more circumspect about the decisions it has to make.