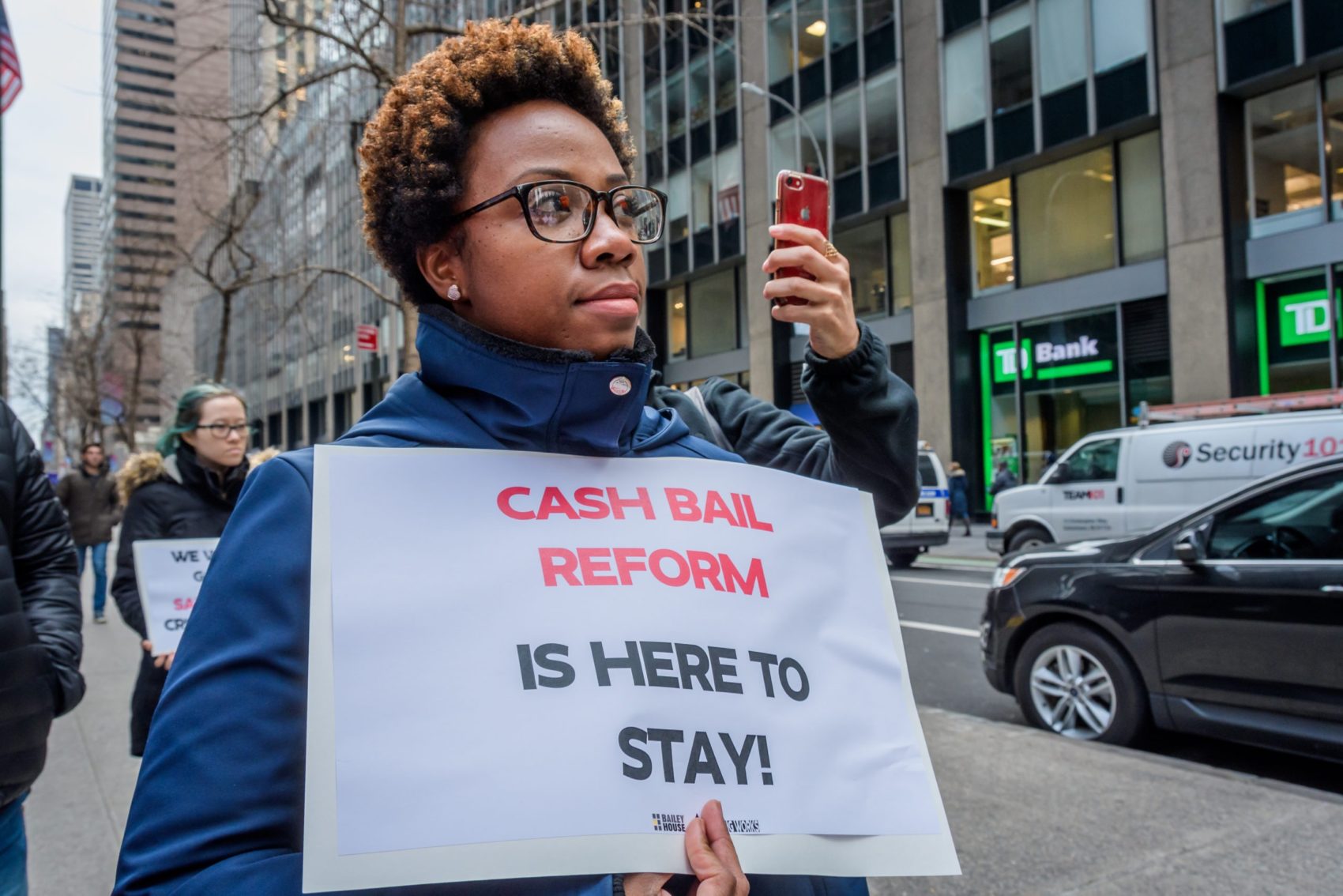 In May 2010, Kalief Browder, a 16-year-old from the Bronx, was arrested and charged with robbery. The allegation was that he had, along with a friend, stolen a man’s backpack. The judge who presided over his arraignment ordered him held unless someone paid $3,000 in bail to secure his release. He was sent to Rikers Island. Seventy-four days after his arrest, a grand jury voted to indict him. This triggered a violation on an open probation case, and Browder was remanded without bail. He remained at Rikers for over three years. He was placed in solitary confinement repeatedly, for a near-continuous stretch of 17 months. He was assaulted by a corrections officer and by other incarcerated people. He was ultimately released, after refusing multiple plea offers, because prosecutors dismissed the charges against him.

Two years after his release from Rikers Island, Kalief Browder died by suicide. His death came after several previous attempts, beginning while he was in solitary.

The story of Browder’s incarceration and death, told by Jennifer Gonnerman in multiple articles for the New Yorker, laid bare the systems that allowed for his detention, for years, in a violent, dangerous jail. The story forced attention to jail conditions, the lack of a right to a speedy trial, and the ways in which the use of money bail allows a two-tiered system such that poor people accused of crimes are detained pretrial while the wealthy are allowed to await trial from home. What he endured was common, but the details of his tragedy still shock, six years after Gonnerman’s first article. His death made those injustices harder to ignore.

Although Kalief Browder’s death drew attention to the problem of cash bail and pretrial detention in New York City, the problem has been statewide. In 2018, almost 70 percent of people in jail in the state were there before any finding of guilt. And while the rates of pretrial detention and jail incarceration have been significantly lowered in New York City, thanks to sustained organizing and policy change at the local level, pretrial incarceration in rural counties continues to climb. (Despite progress in New York City, the use of cash bail even for low-level charges continued. In June, Layleen Polanco died at Rikers after having an epileptic seizure in solitary confinement. She was sent to jail because she

A 2018 report by the New York Civil Liberties Union looked at more than five years of jail data in eight upstate counties and found that in those counties alone, more than 90,000 people had spent at least one night in jail from 2010 to 2014 because they were unable to pay the amount of money necessary for their release on bail. The majority of the tens of thousands of people were detained on bail on misdemeanor charges and noncriminal violation charges. More recent data from the Vera Institute of Justice reveals that in some rural counties, the jail incarceration rate was more than double that in New York City.

Rikers Island, while the most notorious jail in the state, or perhaps the country, is not the only one where New Yorkers face serious risks to their health and well-being.

In an article for The Appeal in 2019, Raina Lipsitz looked at the 24 deaths in the Erie County jail since Sheriff Tim Howard was first elected in 2005. Erie County jail was one of five jails that the state Commission of Correction identified as the worst in the state.  The commission’s 2018 report described them as jails that “pose an ongoing risk to the health and safety of staff and inmates and, in instances, impose cruel and inhumane treatment of inmates in violation of their Constitutional rights.”

Another jail, in Broome County, was the site of “six unexplained deaths” between 2013 and 2017, wrote William Martin for Jacobin in 2017. Martin described the “desperate pleas of medical neglect and abuse” as well as the “tales of beatings, abuse, and arbitrary solitary confinement” that came out of the jail. “These horrors peak in the hidden, brutal deaths in detention—almost always by those awaiting trial,” Martin wrote. Over 70 percent of those held in the Broome County Jail had been detained pretrial. “One of these was Alvin Rios, who died in the jail in 2011. A mandatory state report following Rios’s death confirmed he was left lying down and shaking, ‘in an emergent, life-threatening status without appropriate medical attention.”’

Bail reform was one effort to stem the flow of people into inhumane jails. Despite calls to abolish money bail entirely, state lawmakers and the governor ultimately settled on changes that would scale back its use, permitting it only in cases where a person faces a violent felony and is alleged to have engaged in violence or one of a small number of specified misdemeanor charges. They built on efforts already underway in some jurisdictions and the reforms continue what, at least in some parts of the state, has been a steady effort to reduce the use of pretrial incarceration. Under the law, judges have the authority to order conditions of release. A report by Insha Rahman of the Vera Institute of Justice stated that “a conservative estimate of the legislation’s impact suggests that New York can expect at least a 40 percent reduction overall in the state’s pretrial jail population.”

Despite the human costs of pretrial detention and the viability of reforms, opponents of bail reform have orchestrated a campaign of furious fearmongering in the last several weeks and months, tarring reforms and seeking new grounds for pretrial detention that have never been permitted in New York. In The Appeal’s Media Frame today, Adam Johnson looked at how the NYPD has peddled a story about a crime “spike” to discredit bail reform and how publications, including the New York Times, have treated it as a story worth reporting, despite questions about whether there is a trend to report. Defenders of bail reform told the Times that the police commissioner and mayor were “manipulating statistics to fit their misguided narrative that giving low-income New Yorkers the same privileges as wealthier people is somehow linked to crime.”

In October 2018, law professor Jocelyn Simonson wrote about the monthlong Mass Bail Out Action, which set out to pay bail and secure the freedom of every 16- and 17-year-old and woman held on Rikers Island pretrial. District attorneys warned that the 500 people whom it was estimated the action would release would pose a threat to “public safety.” Simonson argued that the response from elected prosecutors showcased a willingness to use bail as a tool, not to secure people’s return to court, but to incarcerate and essentially punish them before trial. She noted that 87 percent of the people held at Rikers pretrial were Black or Latinx.

This detention is justified in the name of “public safety,” Simonson wrote, despite evidence that the release of people pretrial does not pose a meaningful risk to community safety. “Only 3 percent of ‘at risk’ defendants who make bail are even arrested (let alone convicted) for a violent crime while their initial cases are pending. Similarly, a recent study by the Vera Institute of Justice tracked more than fifty people who were released from court in New York City without having to pay their entire bail—only two were rearrested on a new violent felony charge over the following year.”

It also reveals a narrowness in reform opponents’ conception of public safety.

Last week, on Twitter, the Bronx Defenders, one of New York City’s public defender offices, described how more than 400 of its clients had been able to return home pending trial. The benefits of this are real and will be long-lasting. “For David [name changed to protect identity], bail reform meant being home to witness the birth of his daughter. Through all the ups & downs of his case, reform meant all the difference for him in getting to hold his new daughter [in] the hospital and being there for his family for a moment they’ll never get back.” In other cases:

Max was able to graduate from community college a month ago because he wasn’t incarcerated pre-trial, & is currently pursuing his Bachelor’s degree.

He ultimately plans to complete an MBA.

Accessing education is hugely impactful in changing the trajectory in one’s life.

It was almost 10 years ago that Kalief Browder was jailed because he could not buy his freedom. Bail reform is a necessary, modest, and long overdue recognition of the harm perpetrated against him, Layleen Polanco, and tens of thousands of other people jailed pretrial. It is a recognition that to take away a person’s liberty, without even a trial or a conviction, shreds the presumption of innocence. It is an acknowledgment that we cannot end mass incarceration and criminalization without addressing mass pretrial detention.

Community well-being and public safety are served, not harmed, when people are allowed to live with their families, care for their children, work at their jobs, preserve their housing, go to school, and have access to medical care, substance use treatment, and mental health care. Bail reform will deliver these benefits, replicated across tens of thousands of lives. When opponents of bail reform resort to fearmongering, they reveal their indifference to the life potential and the safety of New Yorkers.