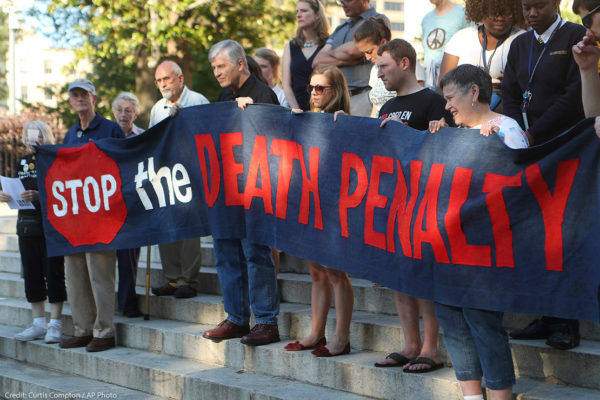 Colorado is about to become the 22nd state in the nation to repeal the death penalty. Its path to get there highlights the power of community-led organizing.

By Denise Maes and Helen Griffiths

For more than twenty years, an evolving coalition of victims’ family members, corrections officers, defense attorneys, prosecutors, faith leaders, and civil liberties champions have worked relentlessly to end the death penalty in Colorado. In 2019, following a democratic sweep of both the legislature and the Governor’s office, many thought repeal was inevitable. Unfortunately, the state senate could not bring the bill across the finish line. In response, the ACLU of Colorado launched an ambitious, multifaceted, bipartisan, and community-driven campaign to finally end the broken death penalty.

Following the first community conversation, we held six postcard parties and three community conversations across the state. In Wheat Ridge, Coloradans wrote letters to the editor, practiced asking questions of legislators at town halls, and gained tools to advocate for the change they wanted to see at the capitol. In Fort Collins and Golden, Coloradans learned more about the death penalty alongside their neighbors at discussion tables. Hollis Whitson, a defense attorney who has worked on numerous death penalty trials, broke down the staggering costs of each case. Ndume Olatushani testified to the flaws of the death penalty by sharing his experience as an innocent man who spent almost 20 years on death row.

Beyond our efforts to build a statewide conversation, we knew that the death penalty would only end by changing hearts and minds with facts, data, and the real-life experience of directly-impacted

Coloradans. Our campaign culminated with an extensive collection of stories and statistics in the ACLU of Colorado report, “Ending A Broken System: Colorado’s Expensive, Ineffective and Unjust Death Penalty.”

The report highlights the many flaws of the death penalty, including its expense, racism, mistakes, and inherent violence. Most importantly, we uplifted the experiences of 22 victims’ families whose loved ones were murdered and shared why, even in the face of such tragedy, they are firmly against the death penalty. Despite enduring unimaginable grief, Colorado victims’ families spent months urging lawmakers to end a system that only causes additional harm by sharing their stories in videos, at a press conference, and during testimony at the capitol.

In episodes on the ACLU of Colorado’s podcast, the Purple State Report, people like Dean Sanderford, who witnessed the horribly botched execution of his client, Clayton Lockett, shared the personal toll of the death penalty system. “It is not sound public policy to respond to violence with publicly sanctioned torture that causes more trauma for everyone involved,” he said.

Faith leaders also played an important role in the death penalty debate. Leading death penalty repeal activist Sister Helen Prejean joined our podcast to share her inspiring solidarity with death row inmates. Catholic priests participated in our community events, and more than 165 faith leaders signed a letter condemning the immorality of the death penalty. It was the strong presence of faith leaders that gave comfort to some of our wavering legislators.

After months spent gathering stories, studying Colorado’s death penalty and engaging Coloradans throughout the state, we held an End the Death Penalty Lobby Day at the beginning of the legislative session. Johnny Ross, who spent seven years on death row before he was exonerated, joined more than 100 Coloradans to deliver the report and thousands of postcards to legislators urging them to end a system that risks making irreversible mistakes.

“We cannot trust a system that makes mistakes with the power to decide who lives and who dies,” said Ross.

In coordination with coalition organizations including Equal Justice USA, we released several sign-on letters during the Senate debate on the death penalty to show the overwhelming support for repeal. Nineteen corrections officers joined a sign-on letter urging legislators to end the death penalty based on the harm it causes public servants tasked with performing executions. Twenty-seven Colorado prosecutors joined a sign-on letter explaining that using executions as a bargaining chip increases the risk that innocent people will plead guilty to a crime they did not commit. Victims’ family members drafted a letter with 70 signatures explaining how the death penalty process forced them to relive the trauma of murder over decades, undermining the healing process.

At the end of January, the bipartisan legislation to end the death penalty, Senate Bill 100, passed out of the state Senate. This month it passed out of the House, and it’s now on its way to the Governor’s desk. Colorado is poised to become the 22nd state to abolish the death penalty thanks to a community-driven campaign that uplifted stories of people directly impacted by this legislation. We dug into Colorado-specific facts on the costs and inequities of the system and coordinated a network of activists to hold legislators accountable.

Across Colorado, people made their voices heard: “Do not kill in my name.” This time, Colorado’s legislators were listening. As Colorado moves closer to repeal, we look to states across the country who are standing up to say that in a society that aspires for fairness and justice, there is no room for the death penalty.

Share:
Tags:ACLUColoradoDeath Penalty
Previous : Man Accused of Burglary and False Imprisonment of a Woman in Her Garage
Next : My View: Will Measure G Pass?