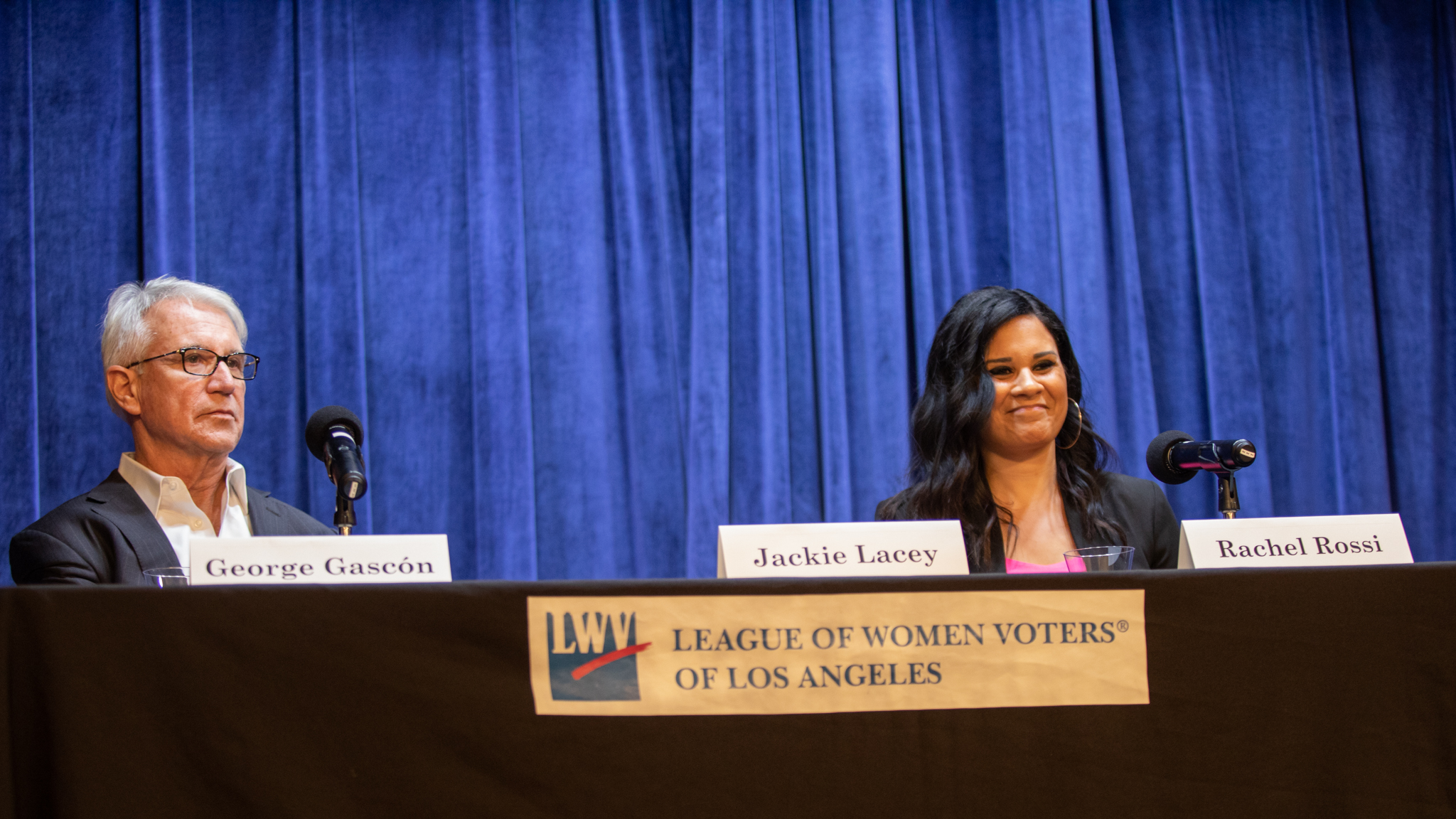 Los Angeles – the League of Women Voters of Los Angeles sponsored a candidates forum, but incumbent DA Jackie Lacey agreed to attend and then pulled out in the wake of an incident in late January in which several audience members had to leave – escorted out by police after angry outbursts over the incumbent’s record.

Chants of “Jackie Lacey must go” were heard and so on Thursday, at the National Council of Jewish Women, the two challengers participated without the incumbent.  George Gascón, the former SF DA, also faced some angry heckling questioning his record as opposed to his stated viewpoints.

Without the incumbent, Mr. Gascón and former Public Defender Rachel Rossi scrambled to see who was more reformist – although the target was rarely each other and focused heavily on the record of the incumbent and, in their view, the lack of progress in Los Angeles.

(To sign up for our new newsletter – Everyday Injustice – https://tinyurl.com/yyultcf9)

“Prosecutors are often not looking at the root impact of their work,” he said.  “We have to continually evaluate how we help people in the reentry process.”

“We have left women out of the conversation,” she said.  One big issue, she said, is to make sure about re-entry and diversion programs, about “how can they all be gender-informed and understand the unique placement of women in the criminal justice system.”

The next question focused around the LA County Sheriff’s Department shootings and killings, and the extent to which the DA’s office should hold them accountable. 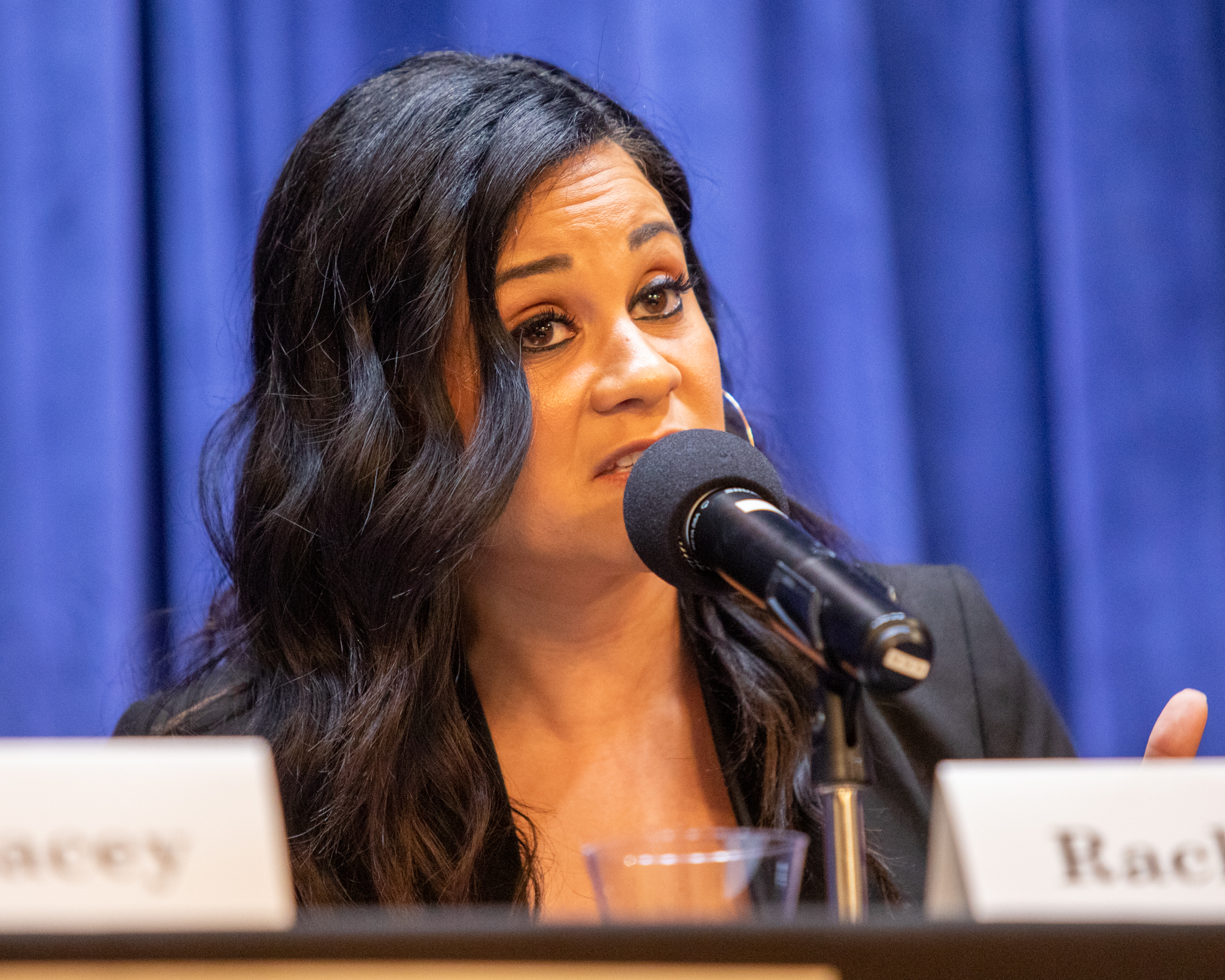 Rachel Rossi said, “I think it starts with getting rid of the inherent bias that exists when district attorneys work alongside law enforcement everyday and then are called upon to make a decision to prosecute law enforcement.”

She noted that DAs rely on law enforcement in order to bring cases forward – “their relationship is too close and that’s a conflict of interest.”

Ms. Rossi called up on the DA’s office to “utilize an independent prosecutor” to give “the power of who is going to prosecute law enforcement to someone else who is not the district attorney.”

She concluded: “We need to determine whether we should be protecting law enforcement, (and who) should be prosecuted under our current law.”

George Gascón noted the case of an elderly woman on the freeway with a CHP officer who was in very clear video using excessive force – “(that’s) a case that certainly, even under the old law – prosecute that case.”

“We do have a new law – although it’s perhaps not as strong as I would have wanted to be,” he said.  “I was the only prosecutor in the state that supported the law by Assemblymember Weber two years ago to really tighten up the use of force law.  That did not pass in the original form.  It has been watered down somewhat – but it does create opportunities (to prosecute).”

He said when he was in San Francisco, they prosecuted over 30 officers, some for excessive force.  An audience member greatly disputed that he had prosecuted enough cases and, indeed, during his time as DA, his office was criticized heavily for failing to prosecute notable police shootings (he noted in his response, “We never did prosecute a shooting but we made clear under the old law that we felt the shooting was unnecessary.”)

The new legislation, he argued, “has certainly narrowed the field of when an officer can use deadly force.”

The candidates were asked about abolishing the CalGang database. George Gascón said, “Before the scandal came out already I made it known that I would not use enhancements – for many of the reasons you have spoken… That was before we even became aware of the problems that we had with the LAPD and the 19 officers engaging in fraudulently putting young people in the gang database.”

He added,  “I think given the totality of the circumstances, it time for the state to eliminate CalGang altogether.”

Rachel Rossi said, “To me, I’m shocked that we’re still using CalGang…  We absolutely need to get rid of this archaic practice.”

For her, a big reason is “there’s racial disparities.”  She cited the statistic that “92 percent of the people in this database are black and brown.”

She added, “We also know the complexities of labeling these youth as gang members.”

Ms. Rossi pointed out, “It is too easy for law enforcement to say someone is a gang member – when they are not a gang member.”

In response to a question on the jail population, Rachel Rossi responded, “We know that there are way too many people suffering from mental illness in our LA County jails and we know based on this Rand Study that even though this district attorney currently is claiming to have been putting forth policies to put people in treatment instead of jail – those people are still in jail.  They are not getting treated.”

George Gascón said “We need to enhance the law enforcement diversion program which is the program that actually officers can take someone directly into services without ever touching the court system.  There are many people that really do not need to come to the district attorney in the first place.”

He also argued that they need “mental health officials who are embedded in our work who can help us figure out what are the conditions for the individual.

“People who are mentally ill do not do well in a custody setting, they deteriorate very quickly,” he said.

In terms of things they can do very quickly upon taking office, George Gascón said, “I would stop practicing the death penalty.”  He noted that “there are many cases still pending around the county, and those cases would immediately be taken out of the death penalty prosecutions.”

He said, “The second thing we would do is stop prosecuting juveniles as adults.”

Third, he said, would be to provide programs for people with mental illness “so that they would not stay within the system.” 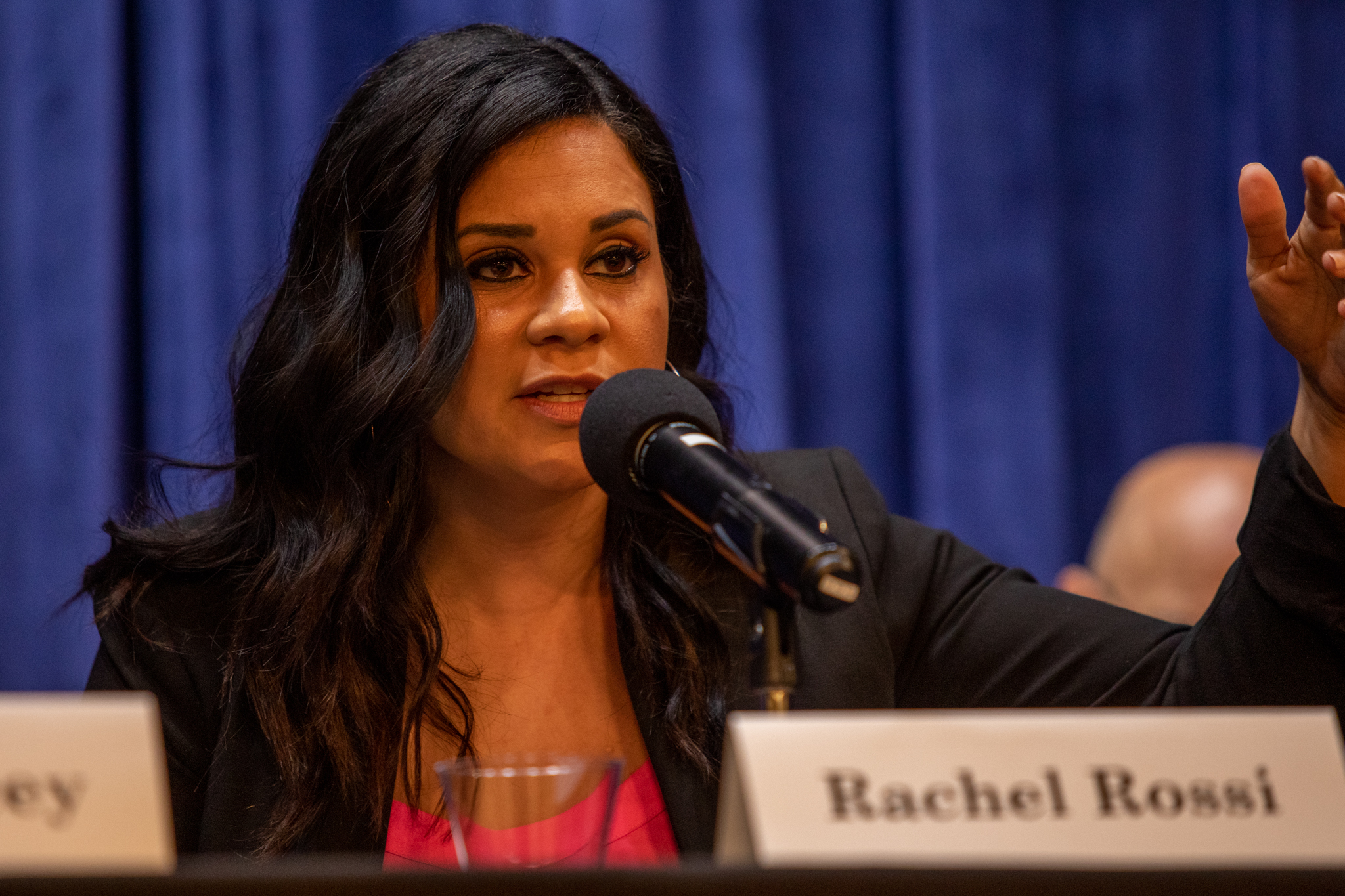 Rachel Rossi agreed, “I would stop prosecuting and filing the death penalty.  That would free up a lot of resources because it is incredibly costly.

She said, “To me this is a civil rights crisis that has existed for a very long time and has become the status quo.”

Rachel Rossi also called for bail reform.  “We need to be proactive about creating a very expansive pretrial release policy.  This is because pretrial, when someone has not been convicted of an offense and they are waiting and incarcerated, they’re very susceptible to losing family, losing custody of their kid, losing housing, losing their job and it coerces innocent people to plead guilty.

“We need to find a way to expand the numbers of people that are released pretrial and to ensure that they’re successful, that they have the resources they need to come back to court,” she said.

They were asked specifically how they would prevent the criminalization of race, drug offenses, and gang affiliation.

For Rachel Rossi, the first step “is to know.”  She said, “We don’t know the data for who is being prosecuted in our county and where the racial disparities are coming from.”

On drug prosecutions, she said, “We have a problem in our district attorney’s office where it is still seen as a criminal issue and not a public health issue.

“Across the country, people have started to see that the war on drugs was a failure,” she said.  “It was a war on communities and on people.  But in our county, we’re continuing that war.

“Today our district attorney claimed to be so innovative to expunge all marijuana convictions, two years too late,” she said, noting that she initially opposed the legalization of marijuana.

George Gascón pointed out he was one of the architects of Prop. 47, which he called “the first major step nationally to decriminalize drug use and bring the prison population down.”

He said it has succeeded in reducing the size of the prison population – “especially men of color in California jails.

“I believe that drug addiction is something that has been dealt with through the health system, not through the criminal justice system,” he said.