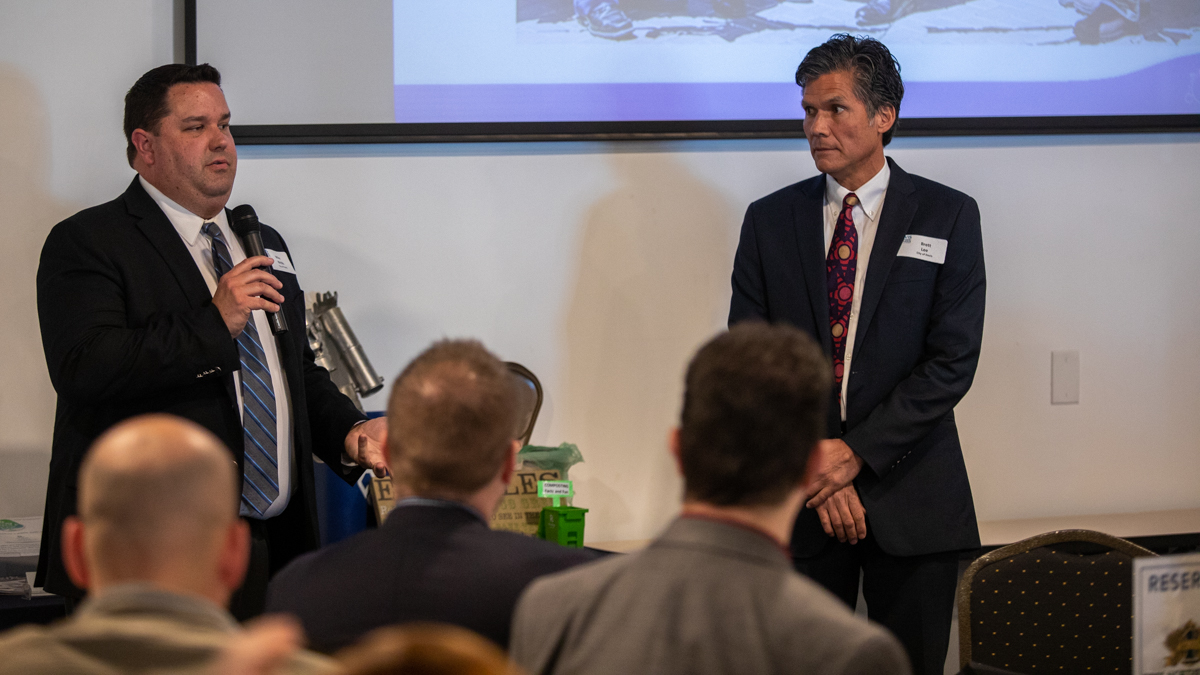 While Mayor Brett Lee closed his remarks with a note of caution, with “it’s not all sunshine and rainbows” to describe the state of the city and expressed concerns about funding for roads, the tone of the State of the City was decidedly positive.

The mayor noted all of the city managers he had worked with over his tenure in office and then sung the praises of the current one, Mike Webb.

“I’ve worked with four city managers,” he said, noting that the city manager is the one that runs the city on a day-to-day basis.  “With Mike the council is very very optimistic that we will maintain some continuity and maintain some forward progress.”

He noted that, as a whole, “we want to become more resident focused.”  He said, “As we make mistakes, we own up to them.  We don’t stick our heads in the sand or sort of stonewall.”

His view of the city is “the ship has turned – we are going in the right direction and we are picking up momentum.”

He noted that previously the city was “really this three or four-way tug of war.”  He said, “I am very optimistic about the future of Davis.”

Mayor Lee noted that they used to have a three-year fiscal forecast and now it looks out all the way to 2037.  There are some concerns here, as revenues dip and unfunded liabilities come due.

“The pension crisis in California is real,” he said.  “In the city of Davis, it’s not a crisis.  It’s a challenge.  Based on our projections and our plans, we still maintain a positive balance.  It’s not as positive as we would like it to be but it’s not falling off a cliff.”

On homelessness, Brett Lee told the story that the winter rotating shelter volunteers take people who spent the night at the shelter and “drop them close to downtown or by University Mall.”

He noted that “we do get a fair amount of feedback at the city about homeless folks hanging around downtown.”

Their hope is to provide people a place to hang out during the day and stay out of the elements.

“Within a week or two, we will be opening up a daytime respite center,” he said, where they will have laundry facilities, and can watch TV, shower and use the restroom.  “It’s an appropriate location,” he said, noting that the library should be reserved for being a library not a homeless shelter. 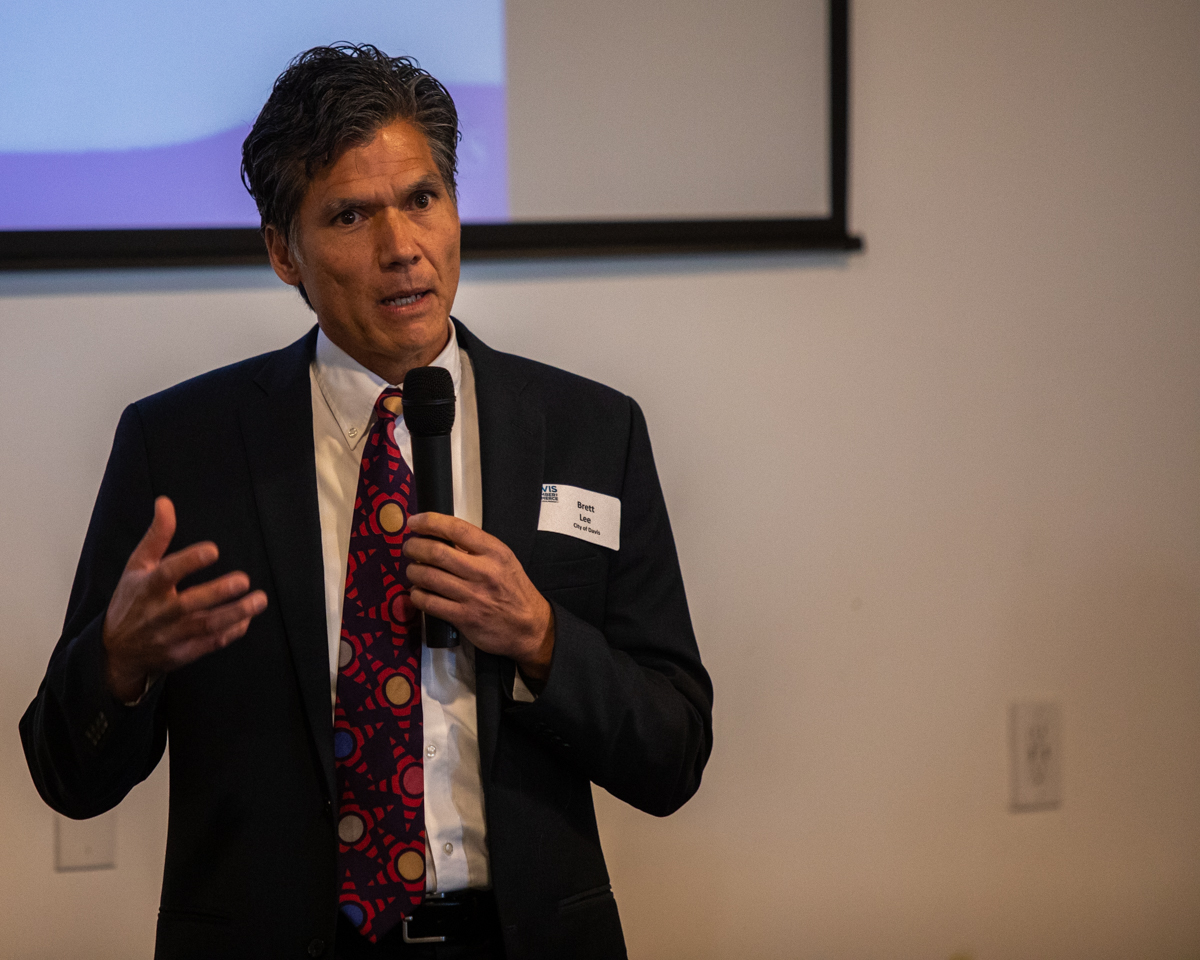 Mayor Lee announced that “there are very substantial changes on the horizon for vacancy rate rental housing.”  For years, the city did not approve any new apartment complexes.  “The city should have something around 3000 beds coming on line within the next couple of years.”

He said right now the vacancy rate is around one-half of one percent while the hope is to get it closer to 3 to 4 percent.  “This low vacancy rate creates some issues,” he said.  At the same time, he said the campus “will be providing 5000 beds in the next couple of years.”

The mayor also noted, “we’re back on track” with the university in signing an agreement to “work as partners” with them.

He noted that while the university doesn’t have an enrollment cap, they have agreed to provide a unit of on-campus housing for any additional enrollment growth.

He added that 40 percent of the students at UC Davis are coming “from first-time college families.”

They showed the video of the construction at West Village.

“The scale of student housing that’s being constructed today,” Mike Webb added, “is pretty incredible.”  He too said, “The growth in on-campus housing is keeping pace with the growth in enrollment in the university.”

He added, combining that with the housing added in the city, “it adds up very very quickly” and “it will absolutely have a positive impact on our very low vacancy rates.”  As well as have an impact on single-family neighborhoods which have been impacted by the housing shortage. 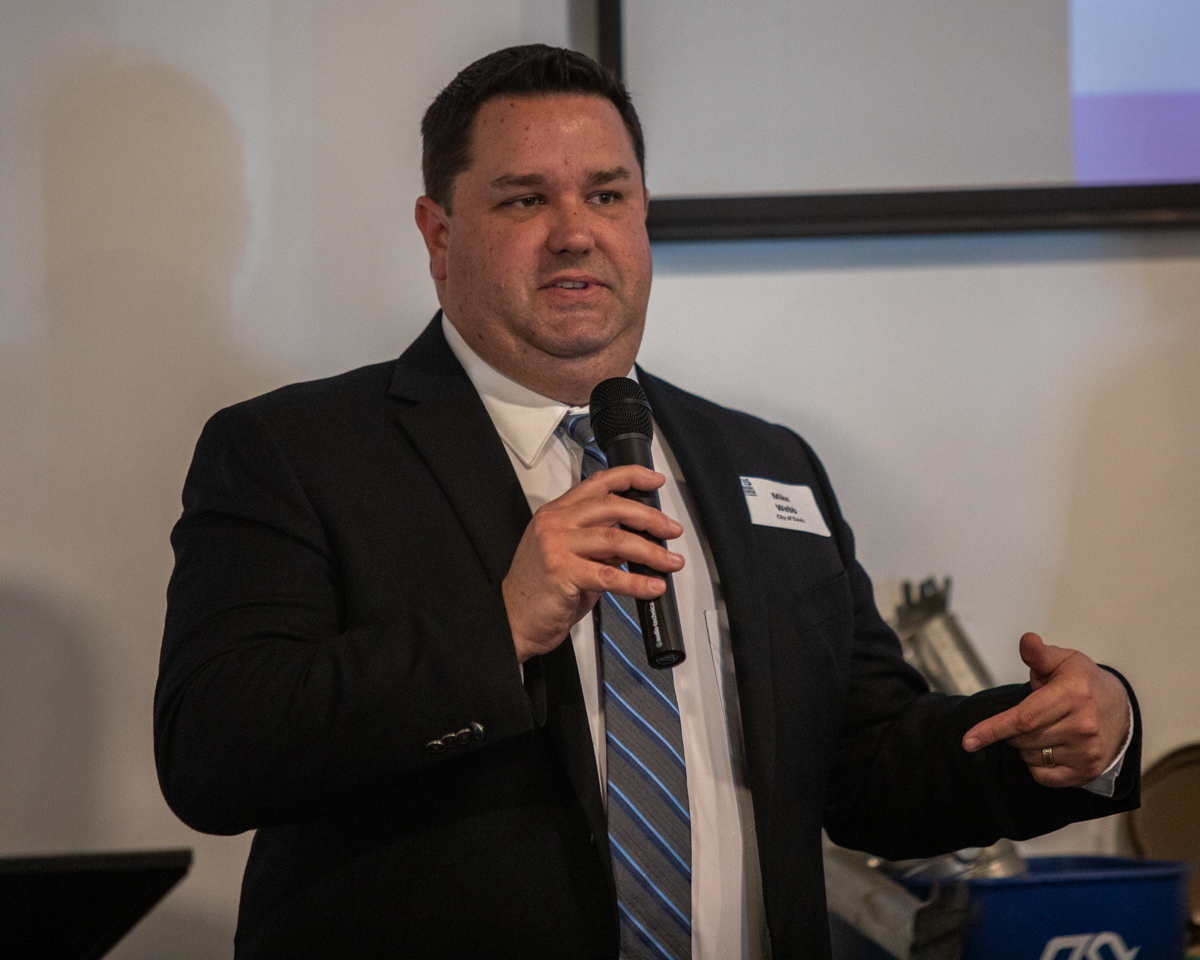 City Manager Webb talked about the city being very proactive on things like affordable housing and leading the way in the state in providing it.  He noted a number of projects that are in the works right now.

He also talked about workforce housing or “the missing middle,” a term he said “that’s coming up more and more.”

He noted a goal is a “mix of unit types” where there is not a homogeneous single-family home development.

“The downtown plan effort – it’s a very substantial undertaking to do a revamp of our entire downtown plan,” he said.  “It’s been making very good progress.”

One of the keys to the downtown plan effort is “economic development” as well as “business recruitment, retention.”

One of the barriers to entry is the “morass that one has to go through in order to navigate the rules and regulations.”  He noted that right now there are no less than seven documents that one needs to navigate and try to comply with.  “The downtown plan effort that we’re doing – the big thrust of it is to try to consolidate it.”

He explained, “By going to a form-based code approach,” we are not focused “on the use so much as the form of the exterior of the building in terms of its mass and scale and how it fits into the downtown.”

The seven documents will be reduced down to one or at most two.

He reiterated, “That’s not to say that we’ve reduced the standards.”

He noted several nice successes.  Nugget Market headquarters – “coming to Davis… from Woodland.”  Residence Inn is opening next month on the corner of Mace and Second Street.  The Hyatt House hotel is underway on Cowell Boulevard.

And last week the Mars corporation opened a Cacao R&D facility on Fifth and G Streets.  “We did a ribbon cutting last week,” he said and “it really highlighted the collaboration with UC Davis.”

He called this a great example of town-gown partnership.

“There are many others here in Davis – some that are here now.  Some that are coming.”  He said, “We’re looking forward to in the next couple of weeks, a very positive announcement about another firm that’s going to be coming to town that’s R&D related.”

Brett Lee said, “It’s not all sunshine and rainbows.  The reality is that we need to be spending more money on taking care of our roads.”  He noted that the tax measure a few years ago only got 57 percent of the vote when it needed two-thirds of the vote.

He also pointed out, as troubling, “some of the armed crimes in Davis.”  He said, “This is unusual and the council finds it unacceptable.”  He noted that “we have some basic responsibilities to the community…  As a city we need to provide a safe community to people who work, live and own businesses.”