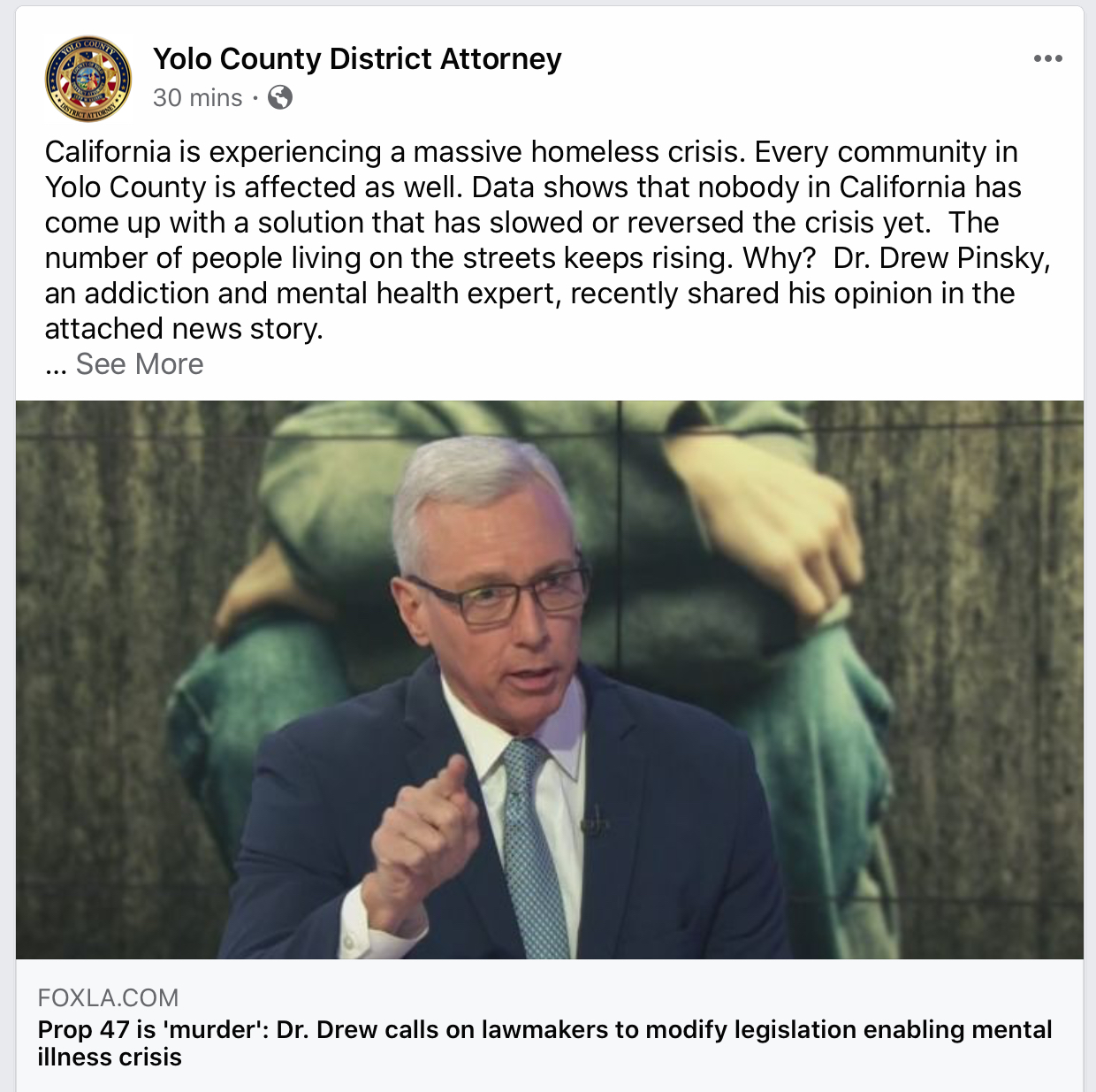 Writes the DA’s office: “California is experiencing a massive homeless crisis. Every community in Yolo County is affected as well. Data shows that nobody in California has come up with a solution that has slowed or reversed the crisis yet. The number of people living on the streets keeps rising. Why? Dr. Drew Pinsky, an addiction and mental health expert, recently shared his opinion in the attached news story.”

The article notes: “Although Dr. Drew does not believe this should be a criminal justice problem, he is calling on lawmakers to reform Prop 47 in order to help the mentally ill get the treatment they need.”

But that’s the problem—prior to Prop. 47, drugs and other non-violent offenses were dumped into the criminal justice system.  Prop. 47 was then supposed to free up money for health-based issues.

The homelessness crisis is more complex—driving it is a housing market that has grown tighter and has priced many people who had been living on the margins onto the streets.  At the same time, the state has failed to address problems of mental illness.

However, the solution to homelessness is not that complex—it is simply expensive.  We need to put money into services and mental health treatment; we need to treat drug addiction as a health crisis rather than a criminal justice problem.  All of that takes money and resources which we have been unwilling to provide.

Yolo County DA Jeff Reisig opposed Prop. 47 from the start and he continues to oppose it.

Last year he blamed Prop. 47 for producing “a revolving door of low-level arrests” in Yolo County.

In 2018, the Appeal accused Jeff Reisig of “using his prosecutorial discretion to circumvent Proposition 47 and Proposition 57, two measures that passed in 2014 and 2016 intended to reduce state prison populations.”  They note that “by using a felony charge known as ‘conspiracy to commit misdemeanor’—the charge makes any theft conducted by more than one person a felony regardless of the amount—Reisig is threatening to send people to prison for minor acts of theft.”

“It’s like rolling through a spinning turnstile,” Mr. Reisig said. “Our efforts … have been pretty dismal.”

It is interesting to compare his views on Prop. 47 to those of the progressive candidates in Los Angeles.

What the LA Times wrote about Jackie Lacey could have written about Jeff Reisig.

The LA Times hammers her for opposing Prop. 47, “a landmark reform measure to convert simple possession of small amounts of drugs and some petty thefts from felonies to misdemeanors. When it passed, she was slow to embrace the changes it brought, and could not adequately report how the decrease in felony prosecutions affected her office’s budget and workload.”

Rachel Rossi charged, “We have a problem in our district attorney’s office where it is still seen as a criminal issue and not a public health issue.

“Across the country, people have started to see that the war on drugs was a failure,” she said.  “It was a war on communities and on people.  But in our county, we’re continuing that war.

“Today our district attorney claimed to be so innovative to expunge all marijuana convictions, two years too late,” she said, noting that Lacey initially opposed the legalization of marijuana.

George Gascón pointed out he was one of the architects of Prop. 47, which he called “the first major step nationally to decriminalize drug use and bring the prison population down.”

He said it has succeeded in reducing the size of the prison population, “especially men of color in California jails.

“I believe that drug addiction is something that has been dealt with through the health system, not through the criminal justice system,” he said.

But, once again, apparently that’s not how Yolo County DA Jeff Reisig views it either.  He’ll tell you he is for things like drug court, but as the Appeal put it in 2018, he has “remained a steadfast opponent of criminal justice reforms favored by many California voters. He is one of the many prosecutors in California who have decried Prop 47 as a ‘public safety disaster.’”