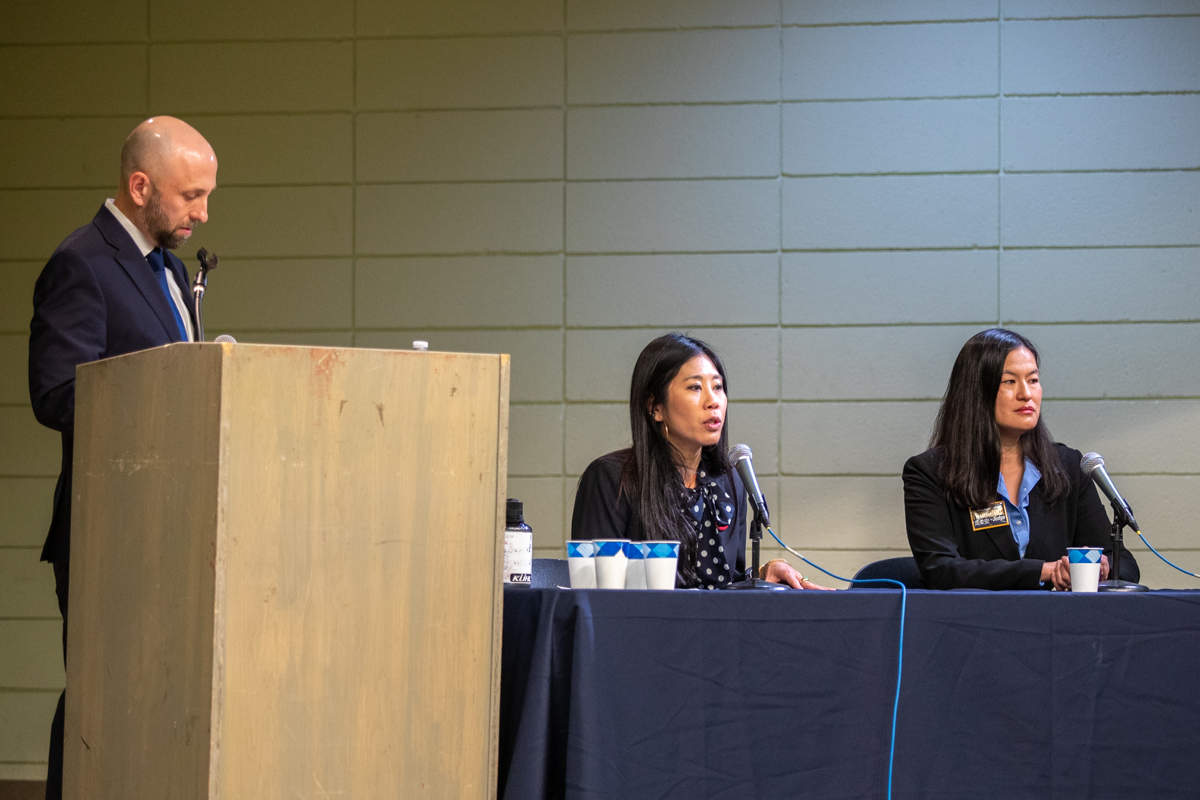 Five of the six candidates for judge were on hand on Wednesday night at the County Fair Building in San Francisco.  Carolyn Gold for the 21st Seat sent her regrets.

There are an unprecedented three open seats in San Francisco, which has allowed six women candidates to emerge – two per seat.  On Wednesday, on hand were Michelle Tong and Dorothy Proudfoot for

the 18th, Maria Evangelista and Pang Ly for the 1st and Kulvindar Singh for the 21st.

Seat 18 is a study in contrasts with Public Defender Michelle Tong taking on Dorothy Proudfoot, an Administrative Law Judge and former prosecutor.

The first question asked about the candidate’s endorsements. 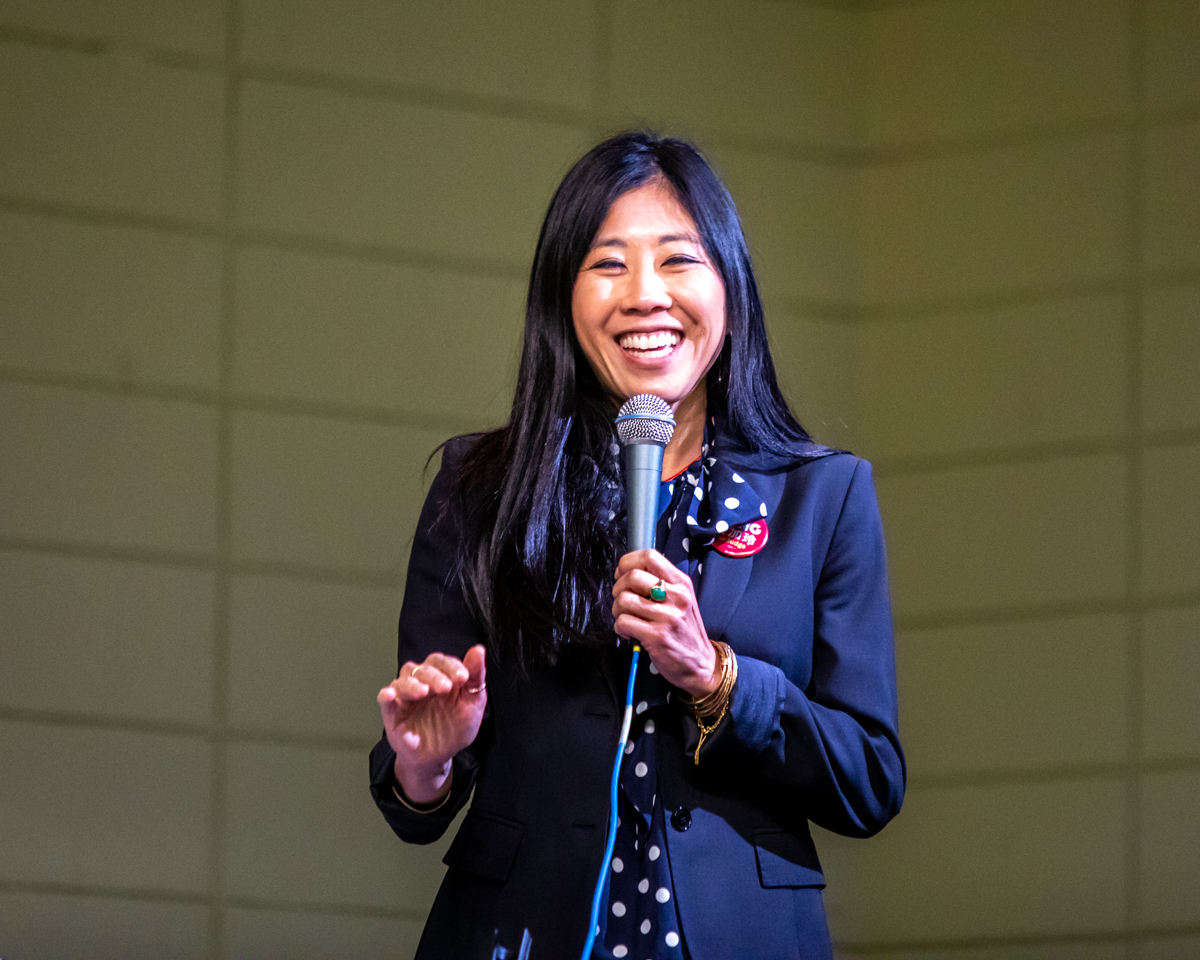 I have nine of the elected supervisors.  It goes on.  The reflection of my endorsements shows that these are all people that work and lead in the city that we all live in.  They reflect that I would be the best candidate to represent all us in the bench.  Because it’s all San Franciscans that are coming forward regardless of whether it’s a labor dispute, it’s traffic issues, whether it’s probate or family court, or any other issue, you all are entitled to a judge who is amongst you.  That’s what my endorsements reflect. 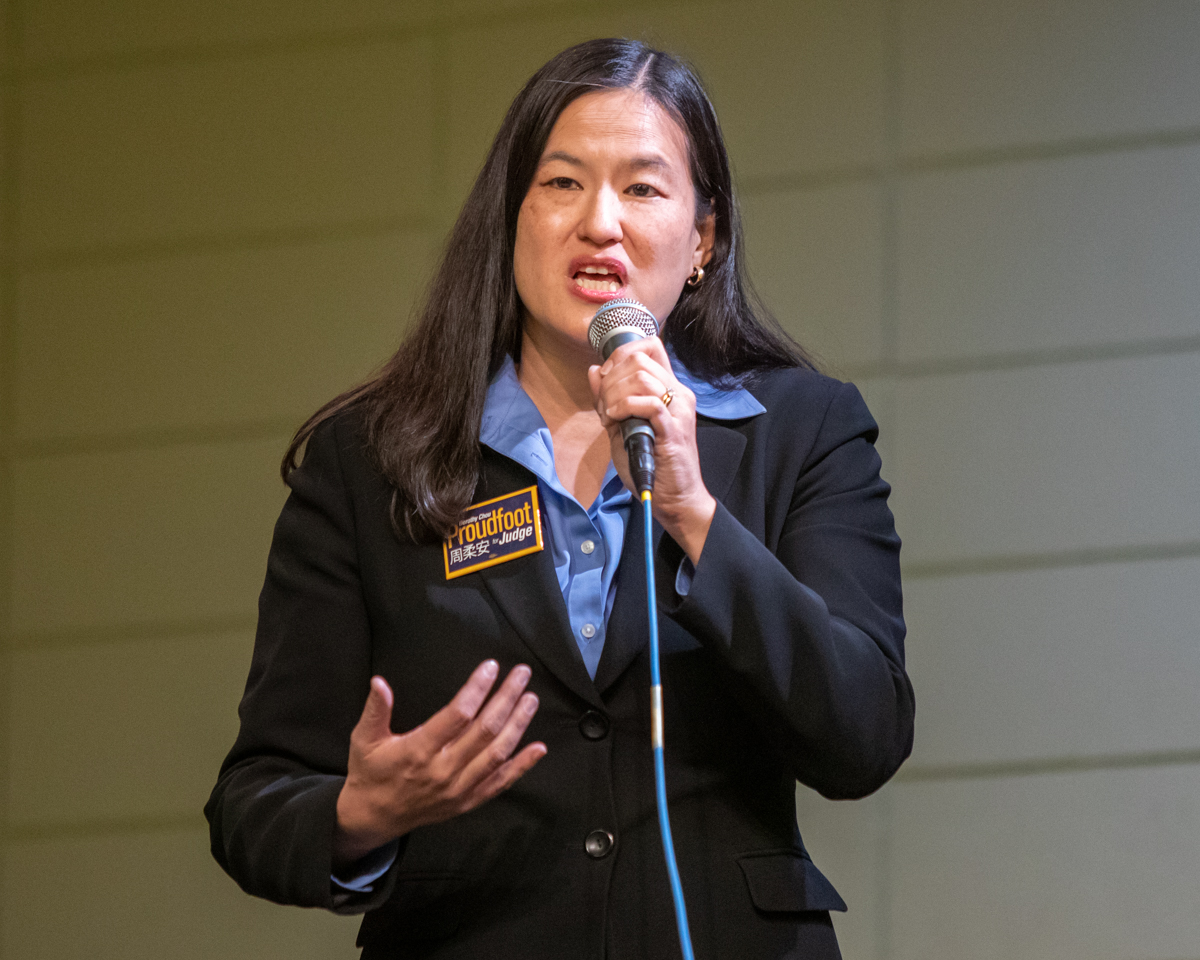 Dorothy Proudfoot: These endorsements for me tell people that I’m qualified for this position.  The people who have endorsed me are the people who know what it takes to be a judge.  They’ve been working here in San Francisco, they know what is important to the community, they know how to be judges.  They have confidence in me.

In addition to the judges in San Francisco, I have also been endorsed by judges in six different counties in the Bay Area.  They have a wide variety of practice areas before they hit the bench and a number of different assignments because they’ve seen my work and done a lot of community work with bars associations.  I was the first Asian American president of the Merin County Bar Association in its 80-year history and that was just in 2017- that’s a shameful fact.

But my work in the community trying to increase diversity, my work with California’s Women Lawyers who have endorsed me, with Queens Bench right here in San Francisco which has endorsed me, San Francisco women’s political committee – tells people that I care about these issues.

I also have the endorsement of sitting appellate justices whose entire job is to review the decisions of trial court judges and correct the mistakes – because sometimes mistakes are made.  What are you going to do when that happens.  Those people have confidence in my ability and my skill.

The second question raised issues of concern reported by the local newspapers.  For Dorothy Proudfoot is a harsh sentence given out to a juvenile in Marin County when she was prosecutor.  For Michelle Tong it was a response to a questionnaire about the Democratic Party Plank. 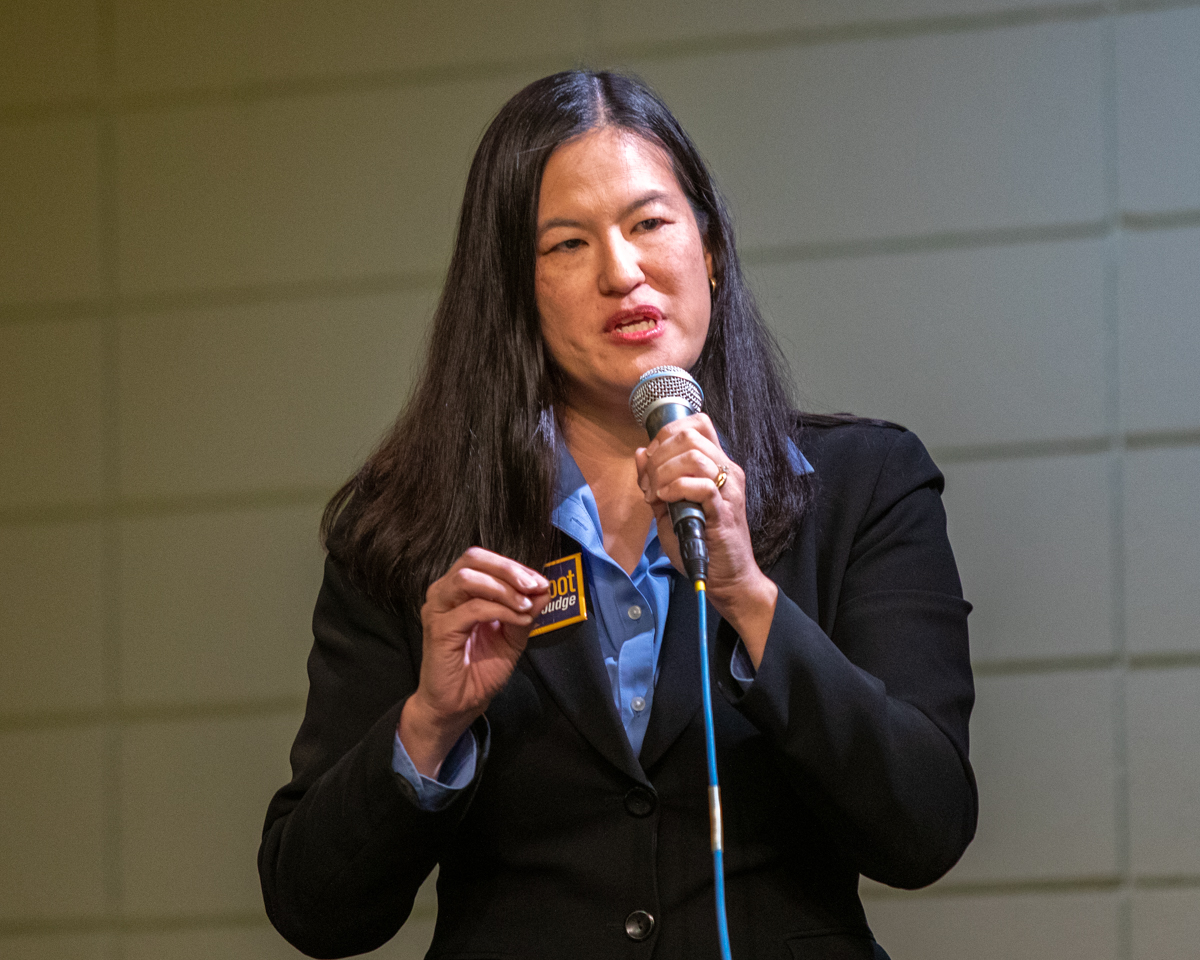 That case was a horrific case.  There were two victims in that case, one was the person that that person was trying to murder.  Intentionally attempting to kill him.  The other one was an innocent bystander who was jogging in the area and had stopped to rest at a park bench.  The park bench, unbeknownst to the victim who was shot in the face and arm – where he suffered permanent nerve damage and still has a bullet lodged in the back of his neck next to his spine, that person had no idea that that park bench was a (gang spot).

The defendant in that case had lured a suspected rival gang member to that location, to execute him.  As district attorneys, we make very difficult decisions.  It’s about weighing the harm to society – how can we find a solution – these cases are not easy, there’s nuances in our society.  So what we do is we try to find the best solution we can using all the options available to us. 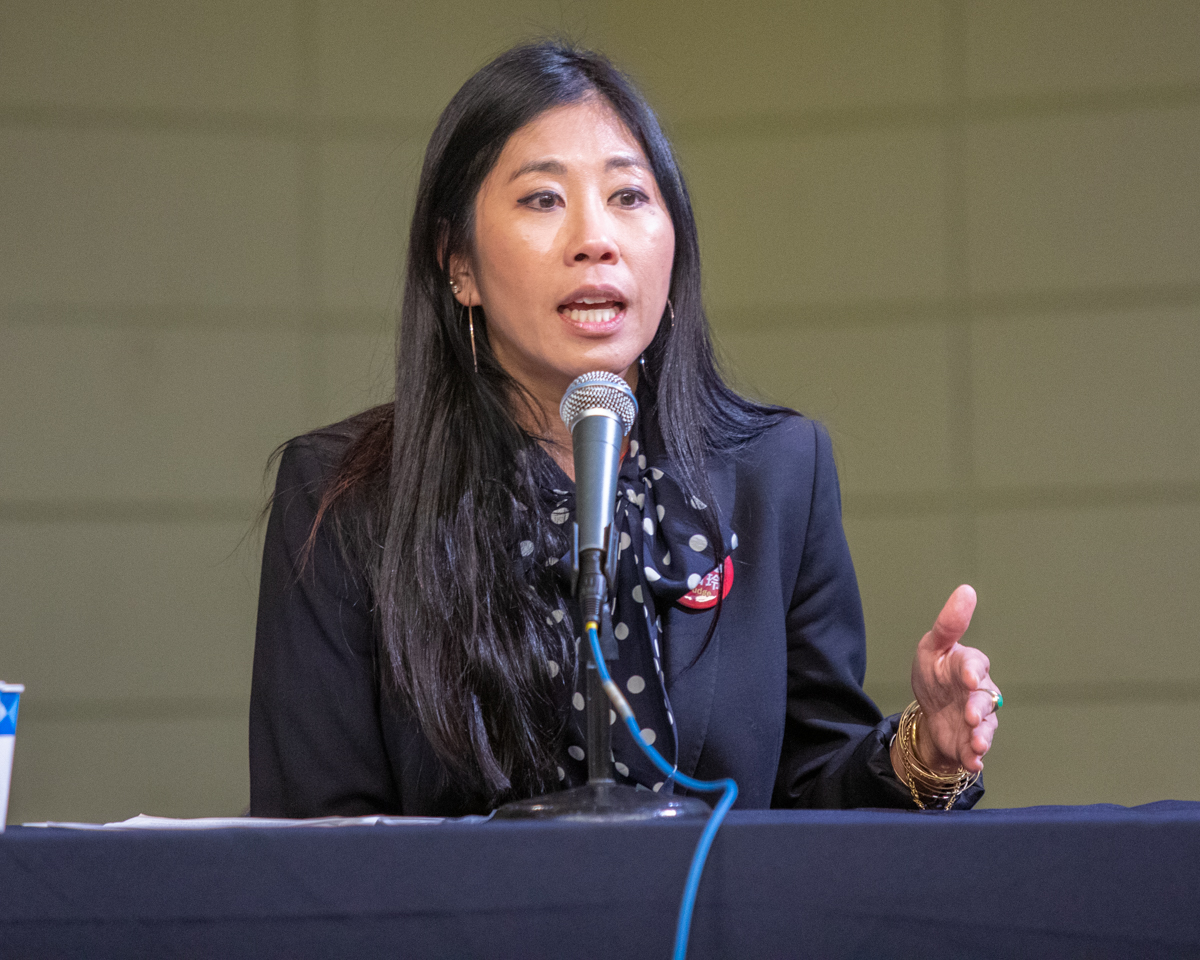 Some of you may or may not know, it’s a 50-page platform that is reviewed every couple of years at the Democratic Convention.  The question was to the effect of – will you fight for the policies of the Democratic Platform.  I did say yes.  You look further as to what the platform means – and I don’t have it because it’s 50 pages, but the Democratic Party will fight to defend and promote the rights and opportunities of all Californians, for example.

The Democratic Party believes in supporting an excellent type of education system.  The Democratic Party honors, celebrates and supports a diverse California.  And they believe in equality, liberty and justice.  Human Rights and basic civil liberties.  So I said yes.

(Note: final question from the moderator will be posted around noon today). 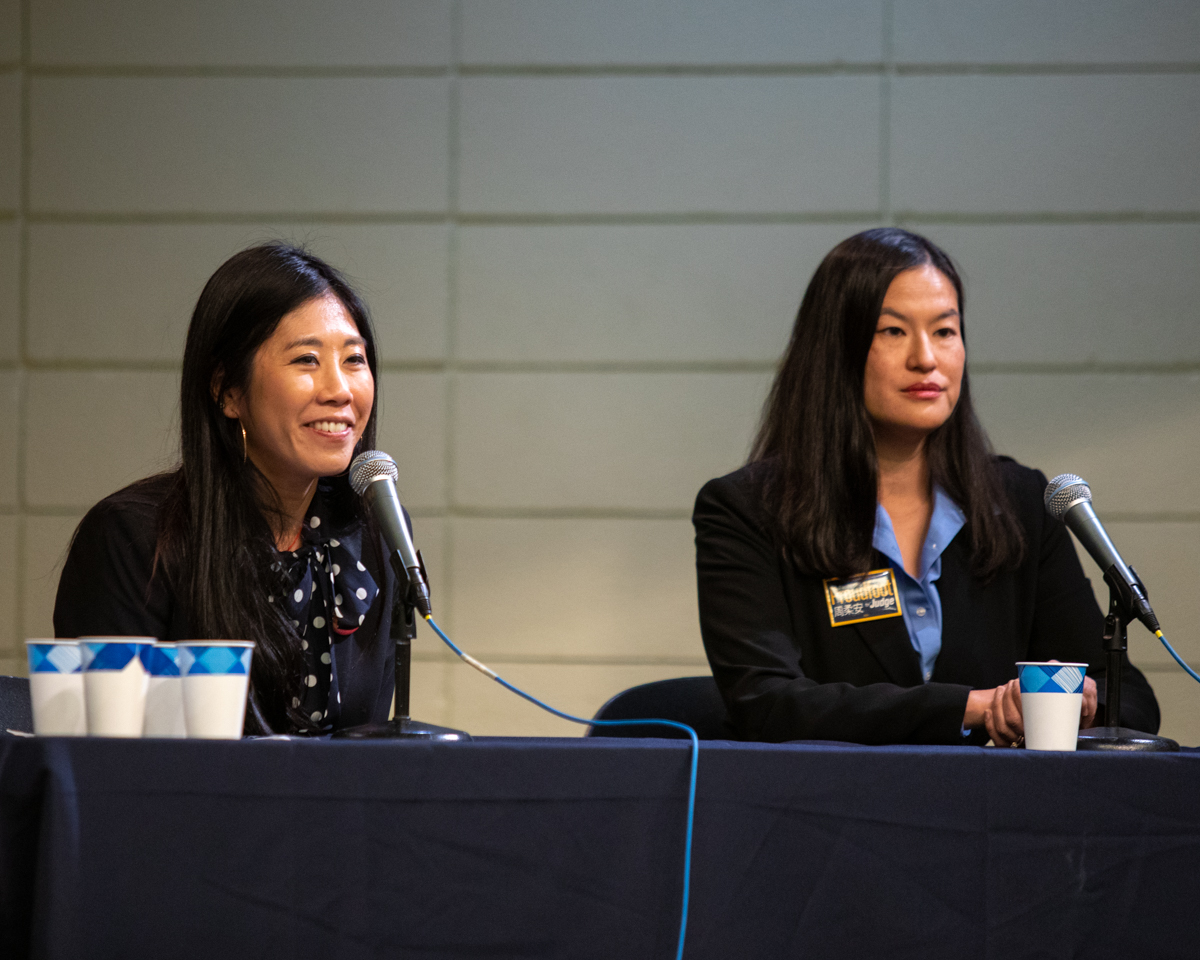 Final question – what are the major problems in the San Francisco Superior Court and How would you fix them.

Like everything, every aspect of life, we’re talking about lack of resources.  There’s a great collaborative system and programs and I see judges here that are leaders in the collaborative system in the justice court here and I think we can always use more.  There are people that would greatly benefit better justice court, from mental health court, from drug court, you know what, there’s not enough resources where people can participate.  It pains all of us.  It pains the bench, it pains people who are representing them, it pains the prosecutors.

Also see there a lack of diversity in the jury trial process.  I represent often times – and I want to be clear, even though I’m representing the accused, the accused is also a victim sometimes.  I myself have been a victim.  I have had clients who have been victims of a crime, it is not a one-way street.

The prosecution of a crime is based on an act, not a person and so when we have a jury trial – there’s a lack of diversity in the trial system. 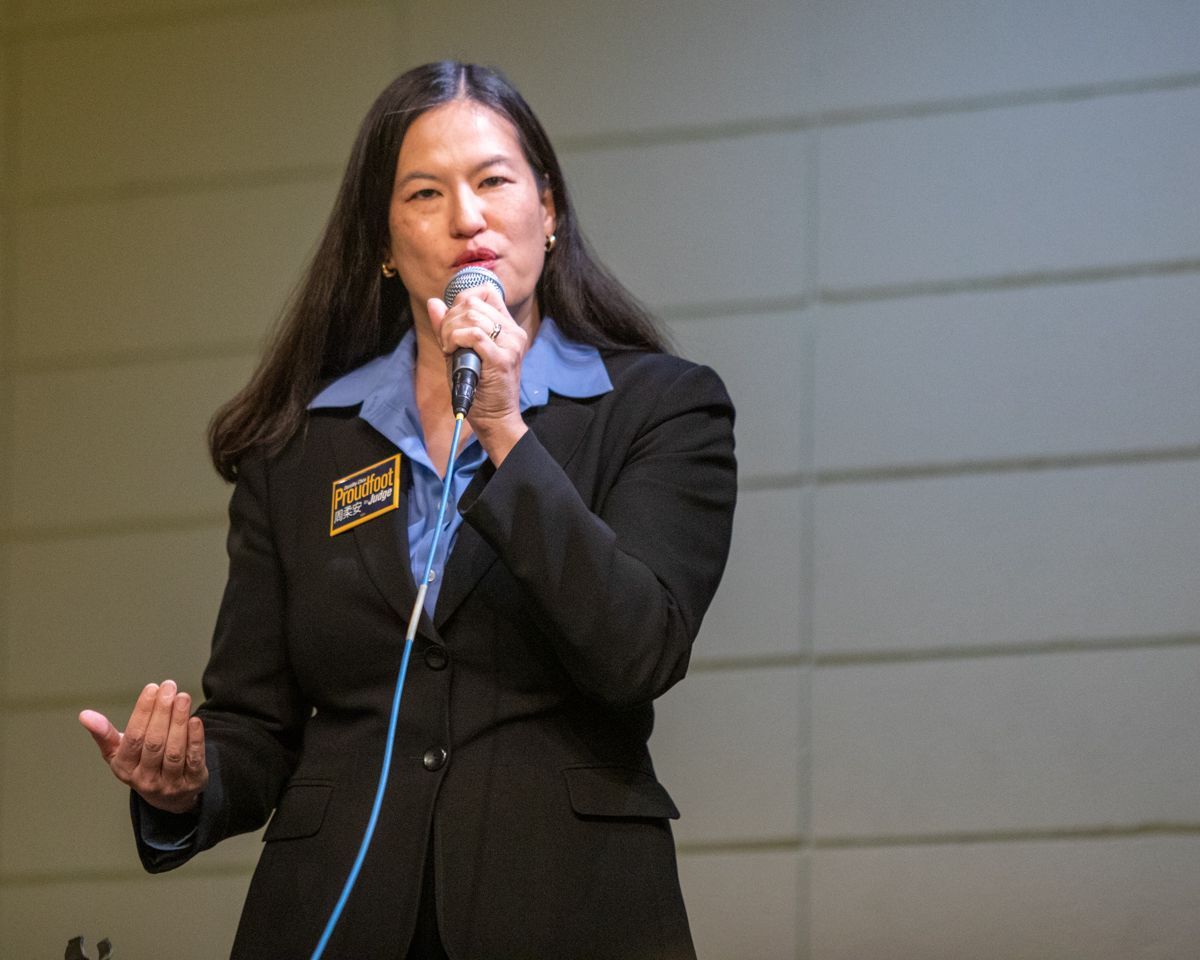 Dorothy Proudfoot: I would agree that there is a resource allocation issue.  One thing that was very troubling to me that I found on this campaign trial, that I was speaking with a counsel with a group of non-profit organizations that were created to improving conditions for Asian Pacific Americans of all aspects of health and wellness.  I was told that there were in fact more programs that were specifically available for youth that were really underutilized.

The question that was posed to me was – do the superior court judges actually know about these programs?  So they can refer youth to these programs where appropriate?

Unfortunately I didn’t know the answer to that question.  I hope so.  I think so.  I’m going to find out.  There are resources out there that are untapped that need to be tapped.  They require diligence to find and utilize and bring together.  That’s something that I have skill at doing.

I work collaboratively with a number of different bar organizations.  To work together to build coalitions to effectuate change.  To fight discrimination.  To improve gender equity.  So there are a number of things that can be done to improve not only access to justice such as language access, but better justice in terms of the decision-making.  There are a number of evidentiary studies out there regarding things like implicit bias, interrupting things like implicit bias in order to make better decisions about people’s lives.  Those are the sorts of things that I champion, those are the sorts of things that I bring to the bench.