Last week the Justice Collaborative held an all-day seminar, the Justice Guarantee Event in San Francisco.  At the event, SF DA Chesa Boudin made his big announcement, as additional activists, scholars and political leaders from across the state and the western United States gathered to discuss key criminal justice-related issues.

One of the panels addressed the issues of incarceration, extreme sentencing and structural racism in our criminal legal system and featured among others: State Senator Nancy Skinner, Assemblymember Ash Kalra, Mano Raju, the SF Public Defender, Colorado Representative Leslie Herod and Jamal Trulove, an exoneree and actor.

The panelists were asked about their ideal vision for the criminal justice system.

Senator Nancy Skinner said, “It’s not a just system.  That word to be used is an oxymoron.  One that is just is one that is colorblind and income blind.”

She told the story that they grew up in a wealthy white enclave in southern California.  Her 15-year-old brother stole a car and took his 14-year-old girlfriend to Catalina Island.  “The cops brought him home,” she said.  She pointed out that this guy stole a car and took a 14-year-old girl overnight and they simply brought him home.  She said of her brothers, “If they were black or brown or low income, every one of them would have served time.”  She added that “none of them did.”

Senator Skinner noted, before they legalized cannabis, in Berkeley you didn’t necessarily smell pot all the time.  “But San Francisco, I don’t care where I was, I smelled cannabis,” she said.  “I didn’t see black people.  Yet when I looked at the arrest rates on cannabis, it’s all black people.  I’m like, how the hell did they find them?  You have to go out of your way to find a black person smoking cannabis in San Francisco.”

State Representative Leslie Herod from Colorado said, “On Monday we abolished the death penalty in Colorado.”  That said, she said “in Colorado there are some really harsh realities.”

She noted there “has been a complicated history with gun ownership and mass shootings,” highlighting Aurora and Columbine.  She herself was involved in two, including the Planned Parenthood mass shooting.  “Most of those mass shooters were Caucasian,” she said.

She noted that, despite this, “the three men on death row in Colorado are black men.  They were prosecuted out of the same district and they went to the same high school.  They are the only three on death row.

“There’s some realities in our system and you can ignore them if you want,” she said.  “We don’t have a just system, we have a punitive sentence.”  Moreover, there are entire communities “who feel that their economic survival is based on how many people we incarcerate.”

For her a better system would be one that actually rehabilitated and prepared for society—but “we don’t need to be sanctioning killing and murder,” she said.

Assemblymember Ash Kalra has the desire to actually “accomplish public safety, not just the veneer of public safety.”

He said a common mentality is that something bad happened, and “we have to do something so the public can feel safer.  They won’t actually be safer, but they’ll feel safer.”  He said that “the system is built upon a false notion of what it means to be safe.”

He added, “If we give someone ten more years, then the public feels safer.  But we know that’s false.”  He said the reason we are where we are: “We want to make people feel better, but not necessarily safer.  At the same time, brutalizing entire communities.  The process creating an industry that feeds off itself.”

Public Defender Mano Raju said that, when it comes to sentencing, “we have to get to the issue of why are people being convicted of things in the first place.”  He said that “there are people being coerced into pleading to things they shouldn’t be because of over-charging from prosecutors and pressure from judges and prosecutors.”

He said, that in addition to fixing things on the back end, defense attorneys need to do much more on the front end to prevent things like wrongful convictions.

“That’s what I’m really focused on as a public defender in San Francisco,” he said.  “If a public defender is doing their job well, they are developing that trust in an early stage of the process.  We’re trying to get a better outcome, but at the end of the day, most public defenders want to get their clients to a better place than they were to begin with.” 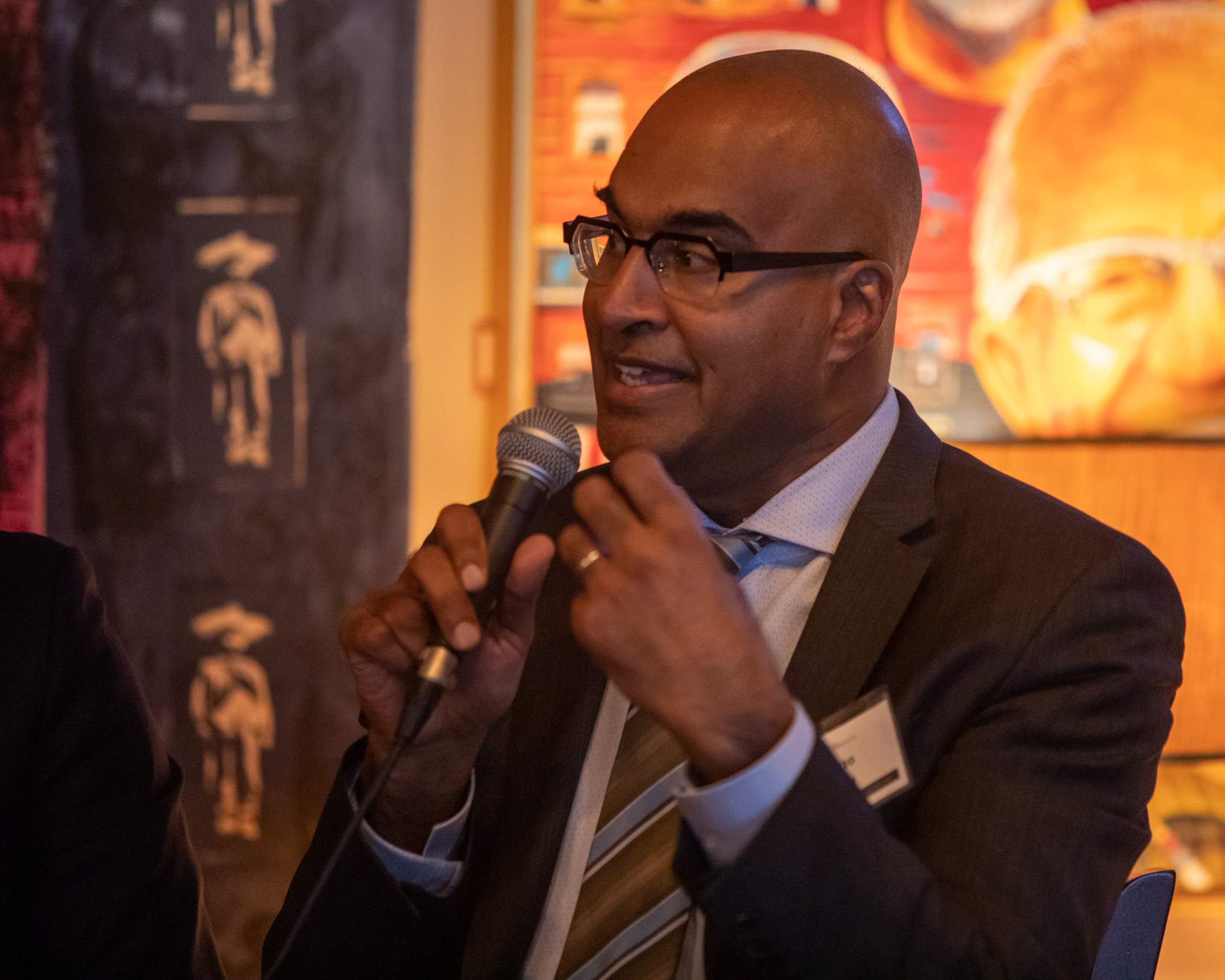 Mano Raju said, “You need to look at how someone was charged to begin with.  If you charge someone with something that carries a life sentence, which a lot of these gang enhancements across the state carry, and then someone pleads to something because they are trying to avoid a life sentence—all of a sudden they’re in a position where they’re considered a violent offender.” 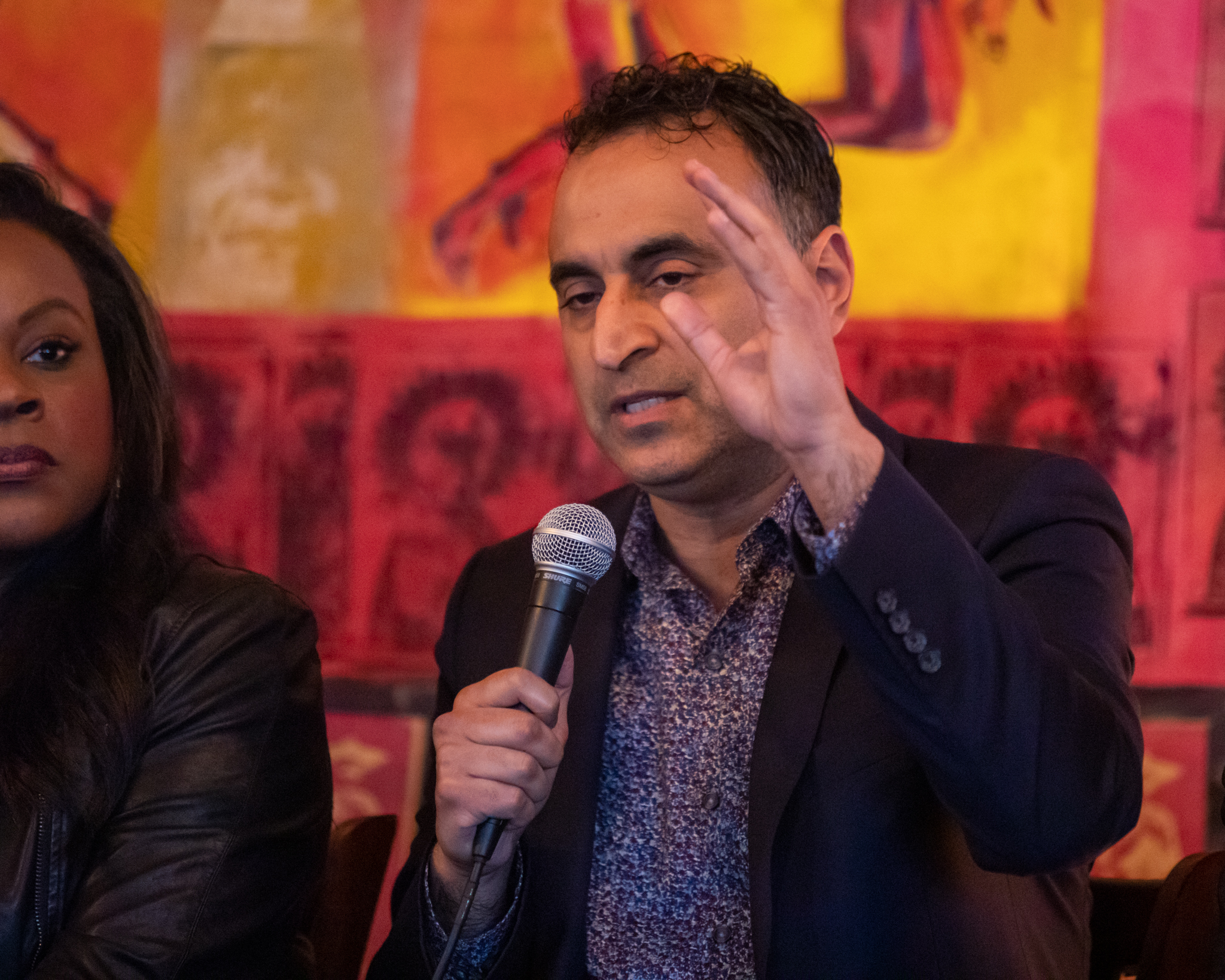 “I had a lot of three strikes cases on a variety of different types of charges,” he said.  He related a case where he had a client sentenced to 25 to life for a minor crime and he wrote the judge weekly until on the 100th day, when he agreed to modify the sentence.  “He told me later he was losing sleep at night.” For Leslie Herod she said, “It’s always an uphill battle when you try to convince people who don’t understand their own racism and bias, that black men deserve to live.  That brown men are worth forgiveness.  That we should have a system that embraces both.”

She said, “My job is to take away the tools that are being used against us, to incarcerate us.”  She said, “You can’t charge a felony for this because if we give them the discretion to do so, they’ll use it against us disproportionately.”

She pointed out that she supports diversion, but “the people who are offered those opportunities are not black and brown.

“What we have to do as law makers is really take those tools away or narrow them down significantly,” she said.  “The court should not be based on luck… and it is right now.”

She noted that Colorado has abolished cash bail for low level offenses.  But she said, “We need to have an uneasy conversation about violent crimes.” 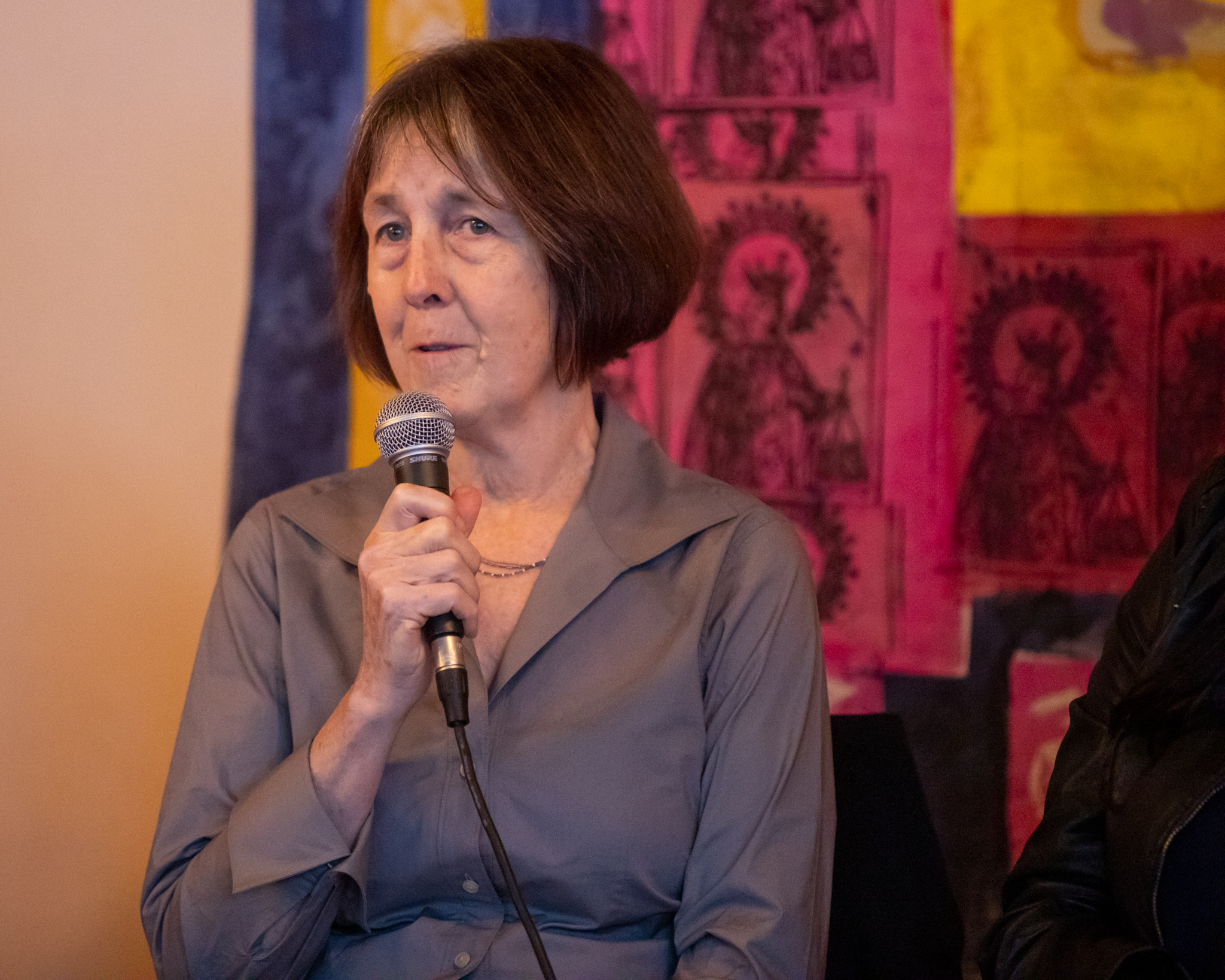 “Mercy is not easy,” she said.  “Culturally, America is not merciful.”

She said, “Then you add on top of that, a clear racism that is structurally in the system.”

She agreed with Representative Herod, “We have to just take the tools away because, while we work hard to tackle that bias and that deep structural racism, which everyday, all of us have to work on, it’s not going to happen overnight.  So we have to remove those tools that we know are being used in that racialized way or we are going to continue to have the outcomes of black and brown people…”

She pointed out that the rate of crime commission by race “is not reflective in the rate of incarceration in the jails.”

The California voters had a choice—end the death penalty or speed it up.  They chose to speed it up.

“The governor was going to have to do one execution every week for the next minimum three years,” she said.  “He could not do that.  He just eliminated it.  So far he’s not gotten that much pushback from it.”

“We have to eliminate… those things that operate in that racialized manner,” she said.  That got her to felony murder.

Her colleagues, she said, were good, “but I had to give them sympathetic faces.”

She said, “When I need to get something like 1437 through, I’m going to use every trick I can in the book to get the votes.” 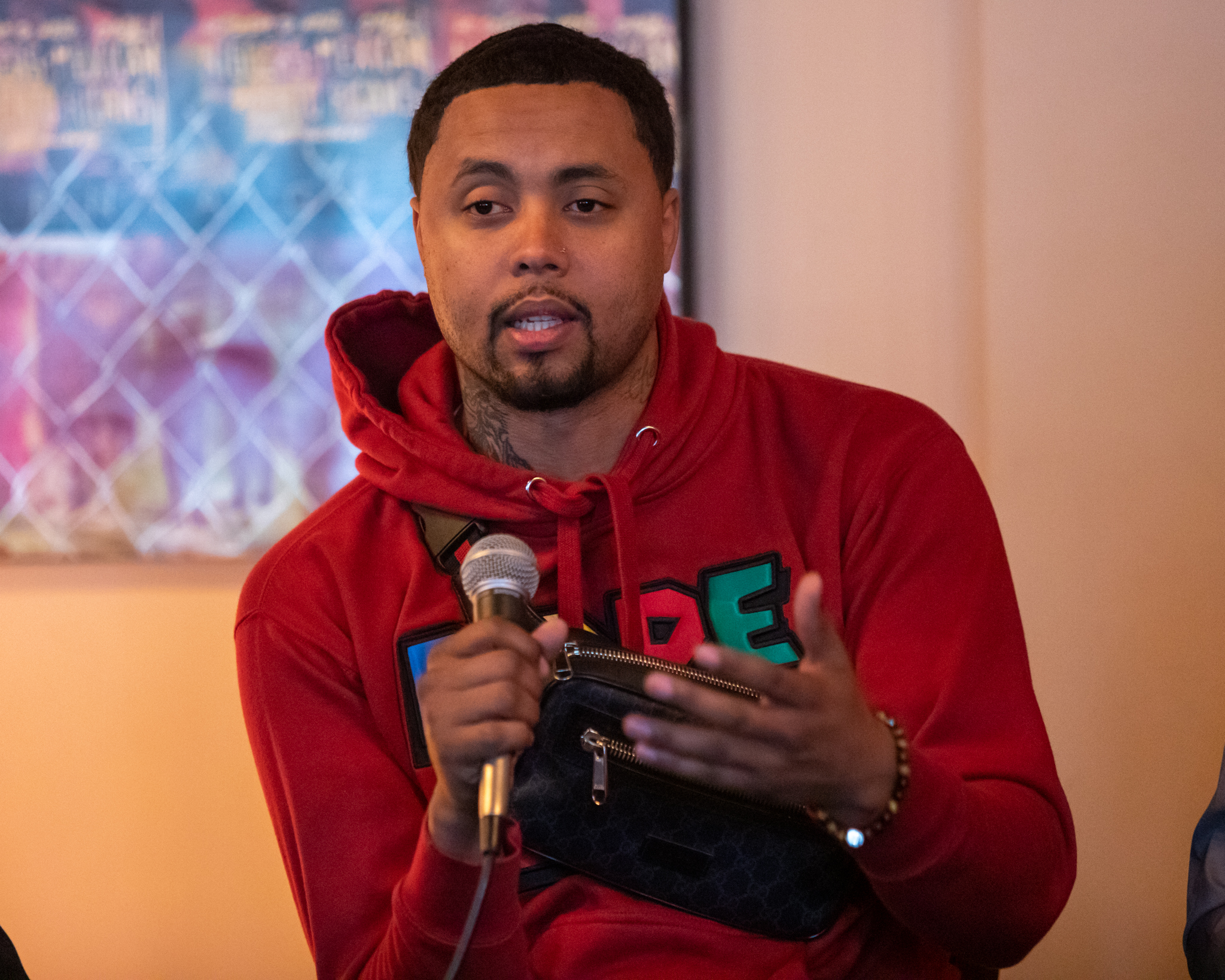 Jamal Trulove said that he comes from a community where they were the targets.  “I was one of the targets,” he said.  “I was framed for a murder that I just didn’t do.

“There’s going to be a DA regardless,” he said, noting that, for him, “the DA was always the enemy.  Nobody in the hood has ever voted for him.

“Once you understand that there is going to be one regardless, it’s got to be the right one,” he said.