From the start until now Measure G has never been in the position of exceeding the two-thirds threshold.  And yet, with one more round of vote counts to go, it now appears poised to pass, as the latest round pushes the measure to 67.3 percent of the vote—168 votes above the two-thirds mark.

In a release from the county elections office, there are still 4078 ballots to be processed as of 2:59 pm on Friday.

“The Elections Office projects to certify the 2020 Presidential Primary Election and provide final official results on Wednesday, April 8, 2020,” they estimate.

But it may not matter at this point.  The lead now is strong enough that it appears very unlikely it will not pass.  To estimate the chances, the measure would have to receive more no votes than yes votes in the last 1000 (just to illustrate the math) in order to fail at this point—even the most unfavorable votes, those that arrived via mail prior to election day, still had the measure receiving 63 percent yes votes. 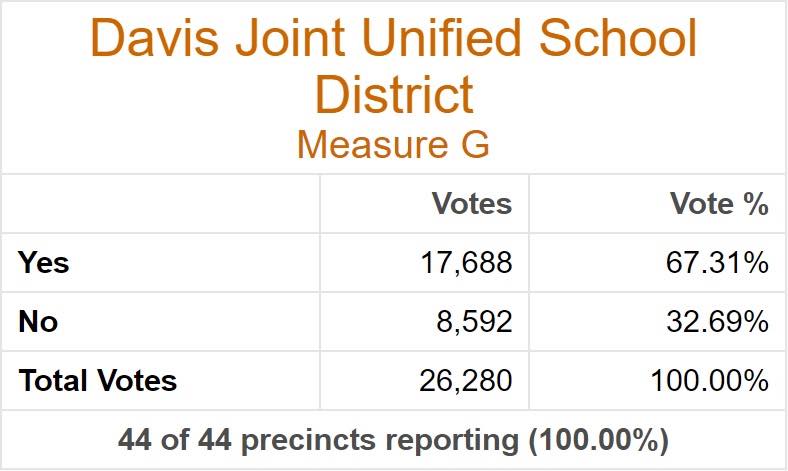 This represents a pretty stunning turnout.  The initial round of votes put Measure G at 63.9 percent.  By the end of the election night, the percentage rose slightly to 65.1 percent.

At that point we projected it would take 68.8 percent yes vote percentage, assuming there were 10,000 remaining votes to push the ballot measure to victory.

At that point our analysis was that this was not impossible, but we viewed it as unlikely.

One remarkable factor is that, instead of 10,000 additional votes, so far there have been 13,563 additional votes and we would guess another 1000 to 1500 to go.  That means there will actually be

While the measure we projected to need to be 68.8 percent, the actual vote counted after election day was 69.4 percent.  And, in fact, it is more impressive than that.  That last count released on March 13 pushed the measure to within striking range—for those 4000 votes, it came in at 69.2 percent, pushing the measure to 66.3 percent or 155 votes shy of the two-thirds mark.

Even more stunning is that the last two batches of votes, about 7300 in total, came in at 71.5 percent of the vote.

The result was a complete reversal.  After the last count, the measure was in a 155-vote deficit from the two-thirds mark, and it is now in a 168-vote lead.

At this point then, our original analysis from pre-election day that it would narrowly pass appears to have held.  Remarkably now, if this latest total holds, it will have passed by a wider margin than 2011’s Measure A, which passed with 67.1 percent of the vote.

At a time when schools are shut down, this will mean that teachers in DJUSD will receive a permanent pay increase to close the compensation gap.  The members of the school board can now exhale and not have to worry about their next step—at least for a few more years.

43 thoughts on “Analysis: Measure G on Verge of Stunning Victory”