President Trump this week tried to make the case that we should reopen the country for business by Easter.  Experts of course were alarmed by this idea, and it probably won’t happen.

But behind it is the notion is the idea that crippling the economy would be worse than the disease.

and those of us who are 70+, we’ll take care of ourselves. But don’t sacrifice the country.”

Part of the problem here is that we have created a false hope by a misunderstanding of the nature of the COVID-19 disease.  We were basically told two things.  One is that 80 percent of the cases were “mild.”  And second that young people may get sick, but they won’t die.

Both of these, while probably technically accurate, provide us with false hope.

The false belief among young people that they won’t get sick has driven irresponsible behavior—like large numbers of them flocking to spring break destinations and having parties.

As the Washington Post attempted to debunk last week, “Their attitudes were based in part on early data from China, which suggested covid-19 might seriously sicken or kill the elderly — but spare the young.”

A Centers for Disease Control and Prevention analysis of U.S. cases from Feb. 12 to March 16 released a week ago shows “38 percent of those sick enough to be hospitalized were younger than 55.”

(If you want to be kept up all night, start reading about the horrifying experience of actually being on a ventilator—many are forced to be in medically induced comas and they fight for their lives.  The thought literally kept me up all night as a family member went through this experience).

Leaving aside the question raised by Dr. Louis Aronson: “Why are we OK with old people dying?” The impact goes far beyond death. 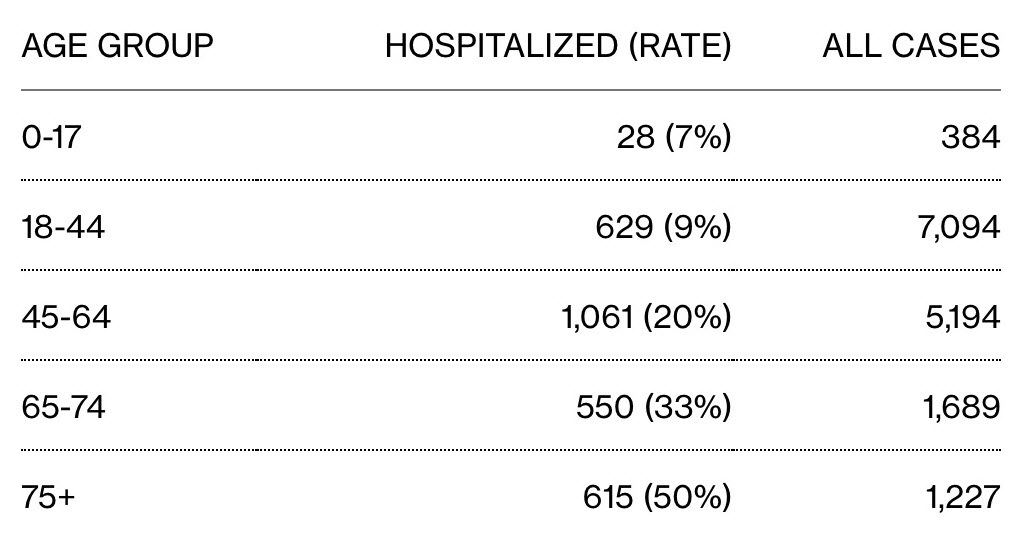 This Bloomberg snapshot of the New York City epidemic shows the hospitalization rate by age.  Ten percent of the people age 18 to 44 will be hospitalized.  That doubled to 20 percent for 45-64, and goes to 33 percent for those in the 65-74 range and half for the people over 75.

Those are not arbitrary numbers—that is the difference in the model created below between social distancing for 14 days versus 2 months. 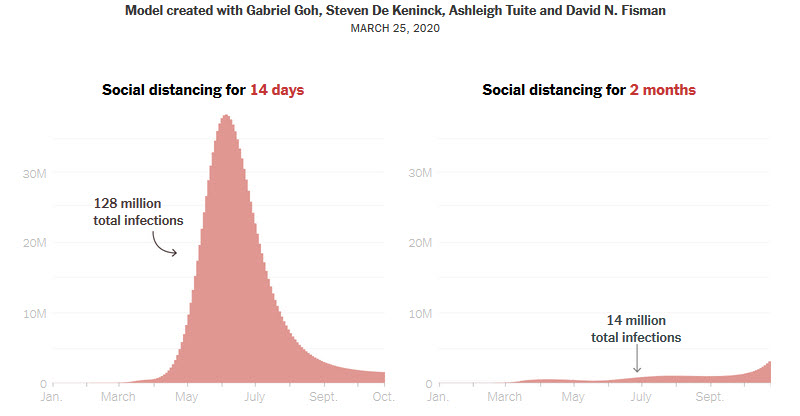 But because we have been focusing largely on the death rates—and with some justification—we have missed that death is not the only huge consequence.  Hospitalization, ventilators, the technology needed to keep people alive are in short supply.  Social distancing can buy us time and also spread out the infection.

On Tuesday, Wired Magazine ran a critical article: “The Promising Math Behind ‘Flattening the Curve.’”  If you are not too afraid of math, I suggest you read it.

The modeling bases some of the analysis on China where the curve resembled “an elongated S shape.”  They write, “The line started out curving upward exponentially for the first 10 days or so, but then it decelerated and finally leveled off. It didn’t just keep getting worse and worse.”

Why?  For one thing, “governments don’t just do nothing: They quarantine patients, limit travel, shut down schools and businesses. China locked down Wuhan and Hubei province and isolated them from the rest of the country, so the population at risk was much smaller than 1.4 billion.”

But there is another answer.  Another basic reason is that new infections can’t constantly increase, because we don’t have “an infinite population.”  They argue, “In reality, as more and more people get sick, there are fewer and fewer healthy people for them to infect.  What that means is that the infection rate can’t remain constant, as our model assumed—it has to decline over time.”

The question is “what happens when a state or county takes action by shutting schools, closing down sports leagues, and making people stay home? The same underlying dynamic remains in place, but you reduce the base infection rate a.”

They note: “With a higher growth rate, more people get sick at the same time. Some of them will need hospital care to survive—but if the hospitals are full, then case-load triage sets in and bad things happen. That’s Italy, where nearly 10 percent of those infected have died.”

They argue: “Reduce this spike and you spread the infections over a longer period of time. That might not sound great as we’re all getting stir-crazy indoors. But it means you avoid overburdening the health care system. Reduce the growth rate, stretch out the curve, and you save lives.”

This is the part that the critics like the President are missing.  They see the economic catastrophe but they are missing the consequences if we allow the pandemic to run more or less unchecked.

Not discussed in any of this debate is what happens to the economy if 40 to 70 percent of the public gets COVID-19 in a close interval?  We know that 18 percent will require hospitalization and it might be higher without available out-patient care.  We know that the percentage who die will increase from perhaps 1.4 to 3 percent—it is now to closer to 10 percent in Italy.

What is all of that going to do to our economy?

And yet, we have the US Government constantly downplaying this threat.  Yesterday, White House coronavirus task force member Dr. Deborah Birx “warned the public not to panic when they hear about models and projections of the pandemic’s spread,” Real Clear Politics reported.

“It’s our job collectively to assure the American people,” she also said. “There is no model right now — no reality on the ground where we can see that 60% to 70% of Americans are going to get infected in the next eight to 12 weeks. I want to be clear about that.”

That led Marc Lipsitch, an infectious disease epidemiologist at Harvard, to respond in a serious of tweets.

He tweeted: “Dr. Birx’s statements today indicated that ‘when people start talking about 20% of a population getting infected, it’s very scary, but we don’t have data that matches that based on our experience.’”

He followed that up with: “If our social distancing works it is possible we will not just flatten the curve, but get a decline in cases. Under a best-case scenario, we will keep that policy in place long enough to get down to very, very few cases domestically.”

He added, “If at the same time we ramp up testing capacity and the ability to trace contacts, in a very best-case scenario, we might conceivably be able to turn to a Korea- or Singapore-style mix of less intense distancing combined with super-intense contact tracing, isolation, quarantine.”

But he warned, it is a “best-case and likely unattainable scenario.”

Among his reasons: “We have not proven that US-style social distancing” can be effective in declining case numbers.  “On this I’m hopeful, but it’s a hope not a fact.”

Second is “we remain woefully behind on testing capacity.”

Bottom line—we have real challenges here with testing and compliance.  The other key point is that people, at least some, are not taking this threat nearly as seriously as they should.

5 thoughts on “Commentary: A Debate Based on False Hope”