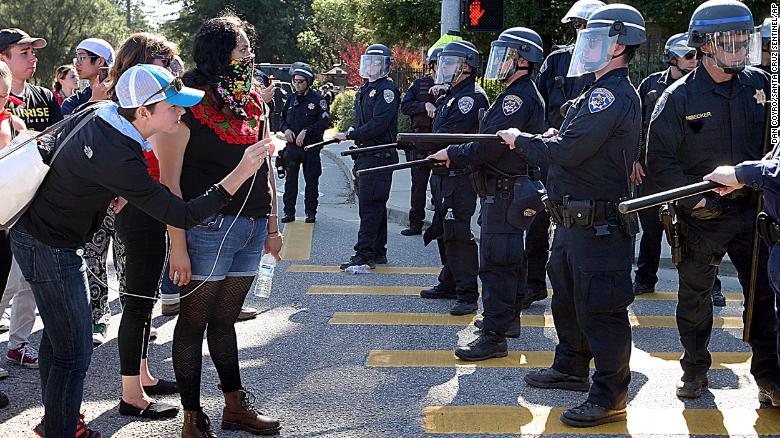 Images of police in full riot gear clashing with otherwise peaceful UC Santa Cruz students perhaps conjures up memories of nearly a decade ago where the eyes of the world were focused on UC Davis and the pepper spray incident.

As many described the scene, striking students were met with batons and armed police rather than with UC administration.

One student, captured in photos, was trying to deliver water to the picket line. They were assaulted and diagnosed with a concussion.

As a letter from the UPTE-CWA Local 6 executive board made clear: “UC Santa Cruz students are protesting low wages in a community that has one of the highest rental costs in the country. The students have been peacefully assembling to force UC administration to negotiate with them for a cost of living increase to offset the high rents and other living costs in Santa Cruz. The high cost of rent in Santa Cruz has been an issue for decades and UC administration has failed to address the situation adequately despite their admitted awareness of the problem.”

UC then badly mishandled the situation by firing 54 teaching assistants when they refused to turn in final fall grades as part of an ongoing strike for higher wages. The number is now 74 TAs that have been fired or barred from spring appointments for their refusal to end the strike.

“It is extremely disappointing to us that we have to take such a drastic step, but we ultimately cannot retain graduate students as teaching assistants who will not fulfill their responsibilities,”

Lori G. Kletzer, the school’s interim campus provost and executive vice chancellor, wrote in a letter to students and staff on Friday.

The students fired back, holding a Monday press conference and rally, reportedly attended by at least 100 supporters.

Dylan Davis, as reported in the Santa Cruz Sentinel, a politics doctoral student, said, “Many of us are putting everything on the line to be here—not because we have so much to lose but because there is so much to be gained.

“Things have gotten so bad here because a fight like this has not happened in decades,” he added, with his pregnant wife, a literature doctoral student, next to him.

At the core of the issue is the cost of living.  Graduate students have taken part in this wildcat strike in part because they insist that, without an increase in the amount of money they receive, they are unable to afford the cost of living in Santa Cruz.

As we learned last week talking to ASUCD leaders in Davism similar problems are brewing in Davis as well.

In a press release received last week, Davis graduate students announced they too began a grade strike for the winter quarter to demand a Cost-of-Living Adjustment (COLA) and to call on the University of California to rescind its threats of retaliation against wildcat strikers at UC Santa Cruz.

According to a report compiled by UAW 2865, UC Davis Academic Student Employees (ASEs) require a COLA of $1,553.20 per month to be relieved of rent burden.

But UC is playing hardball here, rather than understanding that they have a crisis —partially of their own making, and partially as a result of the state housing crisis.

Instead of attempting to figure out a way to address the problem, student protesters were met last week with force from the police and resistance from administration.

Janet Napolitano announced that she would not accede to the student’s demands because it would “undercut the very foundation of an agreement negotiated in good faith” by the union.

“We are sympathetic to the high cost of housing in Santa Cruz and the pressure this puts on TAs, but a wildcat strike is not the way to get relief,” Ms. Napolitano said in a letter to students.

UC did make a counter offer, a housing supplement of $2500 per year, contingent upon the end to a work stoppage and a partial non-retaliation agreement.  But the students believe that amount, a little over $200 per month, is inadequate to meet their needs created by increasing rent and other costs.

The strike and UC response once again punctuates the housing crisis on and off campus.

We pointed out in our Sunday column the problem of the high cost of housing coming home to roost for UC. And that’s the real problem. The incident has happened in Santa Cruz, but it could happen anywhere.

Remember, we were supposed to solve the student housing problem with on-campus housing—even as the Vanguard pointed out that that housing was quite a bit higher than off-campus.

And yet the solution put in place created about 13,000 new beds, but more than two-thirds of those were on campus.

Adam Hatefi points out: “For one bed in a three-bed dorm room, it is more expensive right now than doubling up in a room in an apartment in the city of Davis. That makes no sense.”

Indeed, but that’s where we are and now we have UC firing students rather than addressing the actual problem.

Share:
Tags:HousingLabor IssuesStrikeUC DavisUC Santa Cruz
Previous : In LA and San Francisco Tensions Rise Around District Attorneys
Next : Man Allegedly Claimed that He Would Kill His Girlfriend in Front of Their Child

9 thoughts on “Commentary: UC Escalates Crisis by Handling of Strike”