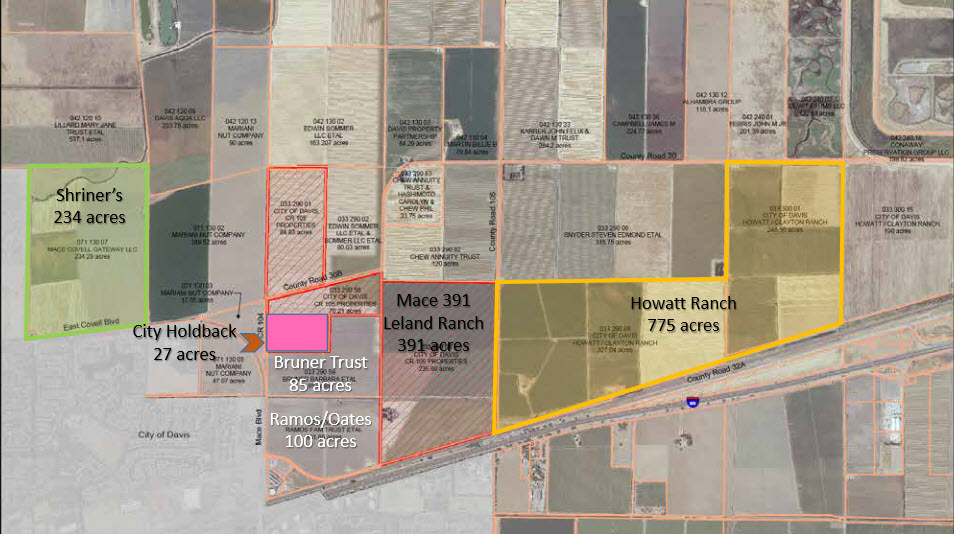 Doby Fleeman and Don Shor insisted on bringing up Mace 391 in the comments threads of yesterday’s article, and rather than burying my personal thoughts as one more comment in a somewhat tangentially related thread, here are those thoughts as an on-topic article … and just so I can have a little bit of personal fun, let me be crystal clear that the two-part topic of the article is (1) conflict of interest, and (2) how and why Davis is an example of “sustainable decadences.”

Let’s deal with the conflict of interest topic first.  In yesterday’s comments Don Shor referred to the Mace 391 process as a “long-planned, fully-vetted, thoroughly-discussed plan to put Mace 391 into permanent ag conservation status.”  That description is about as accurate as the plan to have lots of government workers and foreign dignitaries pay to stay at Trump facilities in various parts of the world. 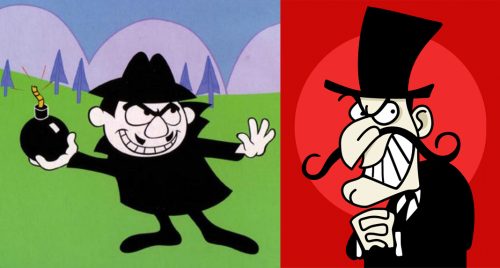 In reality, the Mace 391 process was two things.  (1) a total cluster f**k, and (2) a battle between the forces of Snidely Whiplash on the one side and the forces of Boris Badenov on the other side. There wasn’t a Dudley Do-Right or a Rocket J. Squirrel to be seen anywhere.

Dirty tricks were the rule rather than the exception on both sides, as was a firm adherence to the belief that “what you don’t know will hurt you.”  That belief applied to both the public as a whole, as well as others in the governmental structure(s).  The process that the City and the USDA were using to affect the transfer of money and the transfer of title was of questionable legality.  But, what is done is done.

So when Doby argues for a “process whereby the Pros and Cons can be thoughtfully compared and considered before a final decision” he is out of sync with the context and the personal interests of that day and that transaction.  Doby’s term apples to apples comparison would better describe what was actually happening at the time, if he called it a Shiite to Sunni comparison.

Enough with the conflict of interest.  Let’s move on to “sustainable decadence.”

With all the above said, I do agree with Doby that today, the parallels to the high-level Mace 391 situation are undeniable.  Once again, we are presented with a valuable opportunity to assess both our current status and to consider our strategies and options going forward, as we chart a future course for the City and the Community. But that opportunity comes with a problem.

The problem is that Davis is very well described by New York Times columnist Ross Douthat in his new book The Decadent Society, which has been described as “a powerful portrait of how our age in human history, so superficially turbulent, is actually defined by stagnation, repetition, deadlocks, and decay.”  Tell me whether you believe the following quote describes Davis?

The Decadent Society explains what happens when a rich and powerful society ceases advancing—how the combination of wealth and technological proficiency with economic stagnation, political stalemates, cultural exhaustion, and demographic decline creates a strange kind of “sustainable decadence,” a civilizational malaise that could endure for longer than we think.

Last Friday, right here in the Vanguard, we read the following about the City’s overall fiscal and economic picture (bold added to emphasize key points):

What does Dan Carson see as the solution?  He said it was what we’ve been talking about for years.

“The two big things really are, pursuit of economic development that can generate economic revenues that don’t have to come out of tax rate increase, and really smart budgeting,” Dan Carson said.

He said there will be a big announcement coming up on one of the new tenants at one of the other Nugget Market sites.  “We’ve landed other big AgTech firms,” he said.  “The two hotels.  We’re doing real stuff.  He said the spigot will be on soon for the new Residence Inn up by Mace.  Within a year Hyatt House will be up and going.  Cannabis is going to provide double the general fund benefit, $1 million per year.  “This is real scorable stuff.  It’s not rhetoric.”

He also mentioned the Downtown Plan, which is more than halfway done.

“We are seeing all the signs that people are waiting for us to do the hard work… that could really accelerate what can happen there in terms of investment,” he said.  The key, he said, is eliminate the uncertainty of zoning.  “We’re hearing a lot swirling around… First we need to (present) the plan.

“That’s how we’re going to get the money,” he said.

What is the reality behind Council member Carson’s words.  First, let’s start with the “decay” part of Douthat’s Decadent Society.  In the July 2019 City Budget, the City quantified the amount of “decay” to our roads and greenways and buildings and parks that we have no money to pay for.  That reported shortfall amount was $201 million (over 20 years).  Only six months later, in a January 2020 presentation to the Finance and Budget Commission (FBC), the City’s fiscal consultant told the FBC that the amount of “decay” that we don’t have money to address rose over 25%, from $201 million to $258 million.

As if that $57 million increase weren’t bad enough, the only way that the amount of unfunded “decay” was kept down to $258 million, was because the annual $1 million of Cannabis benefit to the General Fund was included, as was the annual $1.2 million of SB-1 Gas Tax revenue.  Without those two additional revenue sources the decay amount would have grown by another $44 million, and topped $300 million.

So, the honest statement to ourselves would be to say “This is real scorable stuff.  It’s not rhetoric … but it is also stuff/money that we have already spent.”

Robb Davis worked really, really hard, with all his heart and soul and mind when he was on the Council to get the City to embrace Cost Containment.  All his powerful entreaties fell on deaf ears.

Until we are honest with ourselves about how we got to our current situation of economic stagnation, political stalemates, cultural exhaustion, and demographic decline (an honest assessment that Doby has been arguing for for years) we will have to be satisfied with being a poster child for Ross Douthat’s “sustainable decadence.”

29 thoughts on “Guest Commentary: Conflict of Interest and Sustainable Decadence”