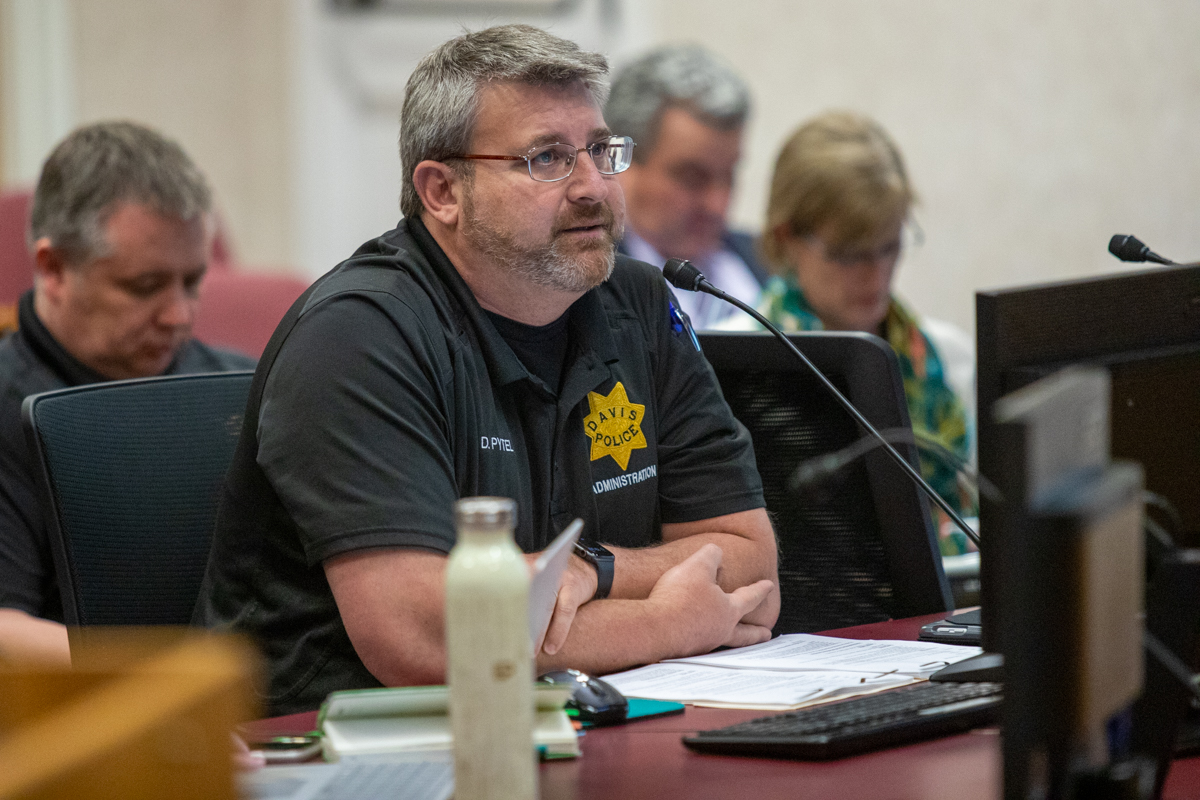 The Police Advisory Commission (PAC) opposed the use of fixed cameras, all seven members of the public who came spoke out against the cameras, but the council finessed its way past some clear differences on the issue among its membership to a 5-0 compromise.

Ultimately the motion contained provisions for four locations, a funding source from public safety funds, and oversight provisions for review of the use—but not license plate readers (LPR).

“I’m not concerned about license plate readers vis-à-vis privacy,” Councilmember Will Arnold stated.  “In my opinion license plates are not a private thing…  The license plate is there for one purpose, that’s to identify your vehicle.”

Will Arnold argued, “Some of our privacy is given up when we enter the roadways.”

Mayor Brett Lee was also in favor of testing out the LPR technology, stating, “I agree with you on the License Plate recognition actually.”

For him the point to compromise on was number of cameras:  “To me 22 locations seems like a pretty heavy ask.  I would be supportive of a reduced set of locations, maybe something like eight.”

Of all the issues before the council, the issue of license plate readers seemed the most divisive.

Mayor Pro Tem Gloria Partida said, “I would be in favor of putting a few cameras out—maybe not as much as proposed, without the license plate readers.”

A middle approach, though, on the LPR was in order, with Dan Carson warning that the legislature may take a look at the use of that technology anyway.

Councilmember Dan Carson said he’s supportive of the staff recommendation, although he was willing to see “a lesser rollout instead of the 22.”  He said, “I prefer a more cautious approach to see how it works, what do we learn.”

He noted, “I have a feeling that the legislature is going to be taking a look at the license plate readers and the use of that technology.  I would prefer us to take a slower approach and I’m convinced that there is a benefit from the cameras alone.”

Chief Darren Pytel pointed out that the state auditor in February released a report to the state legislature on the license plate reader technology with regard to the larger cities in the state.

“All of the fears of ACLU and others regarding LPR rang true,” the chief acknowledged.  “They weren’t controlling access to the data as they should have been and they hadn’t approved their use policies like they were required to do.”

The chief believes that, in light of that, we will see state legislation introduced that would further define policies for use of the technology and information sharing at the state level.

“It seems a fairly obvious route to go in light of the auditor report,” he said.

The auditor noted that state law addresses concerns over privacy “by requiring agencies to have policies and safeguards in place to protect their ALPR systems from misuse.”

The problem that the auditor found is that those agencies either did not have use policies or their “policies were deficient” and “they had not implemented sufficient safeguards.”

Of concern here is that they “shared their ALPR images widely, without considering whether the entities receiving them have a right to and need for the images. The statewide survey of law enforcement agencies we conducted found that 70 percent operate or plan to operate an ALPR system, and this raises concerns that these agencies may share the deficiencies we identified at the four agencies we reviewed.”

These findings squared with some of the concerns expressed by members of the community and the police advisory commission, which was worried about the overall use policy.  The Vanguard, for instance, has noted the lack of provision preventing the police from sharing data with federal agencies that may have more problematic uses for the technology.

The auditor noted “the American Civil Liberties Union (ACLU) raised concerns in a 2013 report about law enforcement collecting and storing ALPR images related to individuals not suspected of crimes. The ACLU noted that law enforcement officers could inappropriately monitor the movements of individuals such as ex‑spouses, neighbors, and other associates—actions that do not respect individuals’ privacy.”

Furthermore, the ACLU has warned: “The ACLU stated that increasing numbers of cameras, long data retention periods, and sharing of ALPR images among law enforcement agencies allow agencies to track individuals’ movements in detail, and it has voiced concerns that such constant monitoring can inhibit the exercise of free speech and association.”

Chief Pytel has attempted to mitigate some of these concerns, limiting storage to perhaps 90 days and putting into place use policies that would prevent the use of the data for non-criminal matters.

However, the track record is not great.  The state auditor’s report not only criticizes other jurisdictions on their use policies, but cites a 2016 Associated Press review that found more than 325 instances between 2013 and 2015 alone “in which law enforcement officers who misused databases were fired, suspended, or resigned, and more than 250 instances of reprimands or lesser discipline related to such misuse.”

Chief Darren Pytel during the meeting acknowledged that, while the state and city’s sanctuary policies would preclude sharing—for instance, information for the purposes of immigration status—they were required by law to share information with federal agencies that request it.

“I’m going to be honest, the FBI if they called Davis PD and said hey, we’re doing an investigation on Bill, what information do you have, under state and federal law we share the criminal justice information that we have with them,” he said.

Moreover, he questioned whether the Independent Police Auditor, as a non-city employee could do a full audit.

“It’s not exactly the most glowing document for the usage in these respective jurisdictions,” he said.  “I think there’s a high likelihood that the state legislature puts significant additional restriction on the usage of ALPRs over the course of the next year.”

Gloria Partida added, “I understand the utility of the use… but I think this is a big step for our community and a lot of people are not comfortable with it.”

She cited the this as the first major recommendation from the PAC, and suggested that “going slowly is a good strategy” and the state is likely to come back with more restrictive protocols.

The council settled on a compromise that excluded license plate readers and limited the number of cameras to four, but went with the fixed cameras rather than the mobile and less intrusive ones.