In a special meeting on Tuesday, the Davis City Council voted 5-0 to declare a state of emergency and grant the city manager emergency powers to act in case events proceed too quickly to convene a council meeting.

“There have been a variety of very unprecedented actions that have occurred across the world,” City Manager Mike Webb told council.  “When these times arise there are special provisions within the state law that allow local jurisdictions to declare emergencies that allow for flexibility and adaptability into very evolving conditions.  Which is certainly what we have before us right now.”

Dana Carey, the OES Coordinator for the Yolo County Office of Emergency Services, said that they have been planning, training and preparing for things just like this.  In fact, she noted that this is somewhat unusual in that they had a good deal more time for this emergency than many others have had, and have been preparing since December.

She also noted that most of the plans which have been rolled out have been developed since 2005. 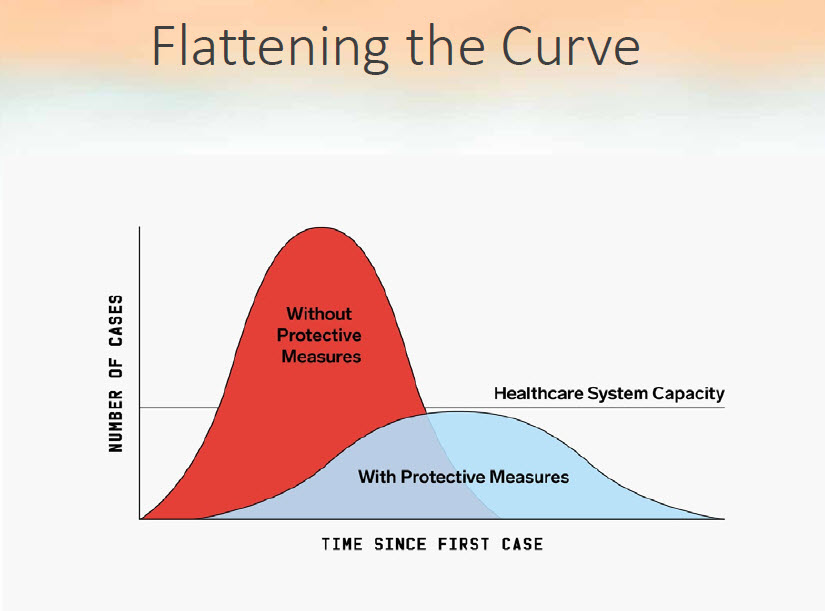 The goal, she said, is to “flatten the curve,” where she explained that “we’re really trying to take that peak of that epidemiological curve—most every virus follows this pattern … if we can lower that peak then our health care system in the United State has a much better chance of responding to it.  Because we are stretching those cases out over time, rather than hitting the health care system with one fell swoop.”

She explained that they think it in terms of a continuity plan where they assume a 50 percent reduction in personnel due to incapacitation and figure out what the essential functions are and what is required to keep the system going.

Ms. Carey said it is being asked of everyone at this point because such a directive came out of the Bay Area very quickly.

“Every health officer in the state is contemplating when they would release theirs locally,” she said.  “It’s not a matter of if… but more a matter of when.”

The general sense is that people should go through their doctors and health care providers for tests rather than initiate them on their own.

“We do have a number of tests out of our public health lab,” Dana Carey explained.  She said they have plenty of tests at this point but they are being protective of the inventory.  “We want to get the people who are identified by their physicians as critical tested first.”

“It’s here,” she said.  “The nature of community spread means it’s already here among us.  Whether we test every person or not, that is just data necessary that we need to see the epidemiological curve.”

She warned if we tested everyone, “we could be wasting our testing ability.”

Ms. Carey said that if they put the mitigation measures in place and do this right, this might not be as bad as feared.

She said, “If we do mitigation measures right, it may not get as bad.”

Mike Webb explained that “it’s all about the continuity of government.”

Police Chief Darren Pytel pointed out that the city not only provides services but it is also a large employer and so they have to balance the interests of their employees against the public interests.

As Chief Pytel explained, the city needs the latitude to make its own decision rules in the city without having to get the council together.

It is important to note: “A local emergency now exists throughout the city of Davis.”

“The powers of the City Manager shall be those prescribed by State law, by ordinances and resolution of this City, and by the emergency plans of the City of Davis.”

The city manager would have “the authority to purchase supplies or contract for services to address or mitigate the spread of COVID-19 or to ensure the continued operations of essential city services.”

This would give the city manager the authority to approve plans, award and execute construction contracts, approve subdivision improvements, final maps, and parcel maps, apply for and accept

In most cases, “The City Manager shall seek ratification as soon as feasible and safe for the public.”

It is important to note: the emergency powers “cannot conflict with State or federal law.”

Such powers could be: prohibitions on gatherings (already in place), moratoria on evictions (moving in that direction), moratoria on disconnection of utilities (this was discussed briefly in the second item), temporary closure of places open to the public, shelter in place, and curfew.

Chief Pytel on the last one noted that “this hasn’t been done in a really long time” and it must involve a serious public safety risk and right now they don’t anticipate using it.

Mike Webb added, “We hope we do not need to use all of the components that are in it.”

There was considerable discussion that this was simply something which would give the city the ability to respond quickly in the case that the council is not available to act immediately.

Mayor Brett Lee pointed out, “I have no worries about Mike excluding us from the process,” and he added, “if anything he would slow things down.”

Council and staff were quick to point out that the reference to final maps and such refers not to land use authority but to the ability to handle the final process of very ministerial acts.  There would be nothing in here that would circumvent public hearings.

There was also a question as to whether they should have to reenact to extend this ordinance or have an affirmative move to terminate the process—the latter was supported by the city attorney.

Brett Lee pointed out, “We don’t know how long this is going to take—this is a months-long thing.”

He noted that, by reducing the height of the curve, they were extending the length.  The question was how they could safely conduct council meetings with full participation of the public.

Will Arnold noted, “We don’t want to wait to declare a local emergency.”