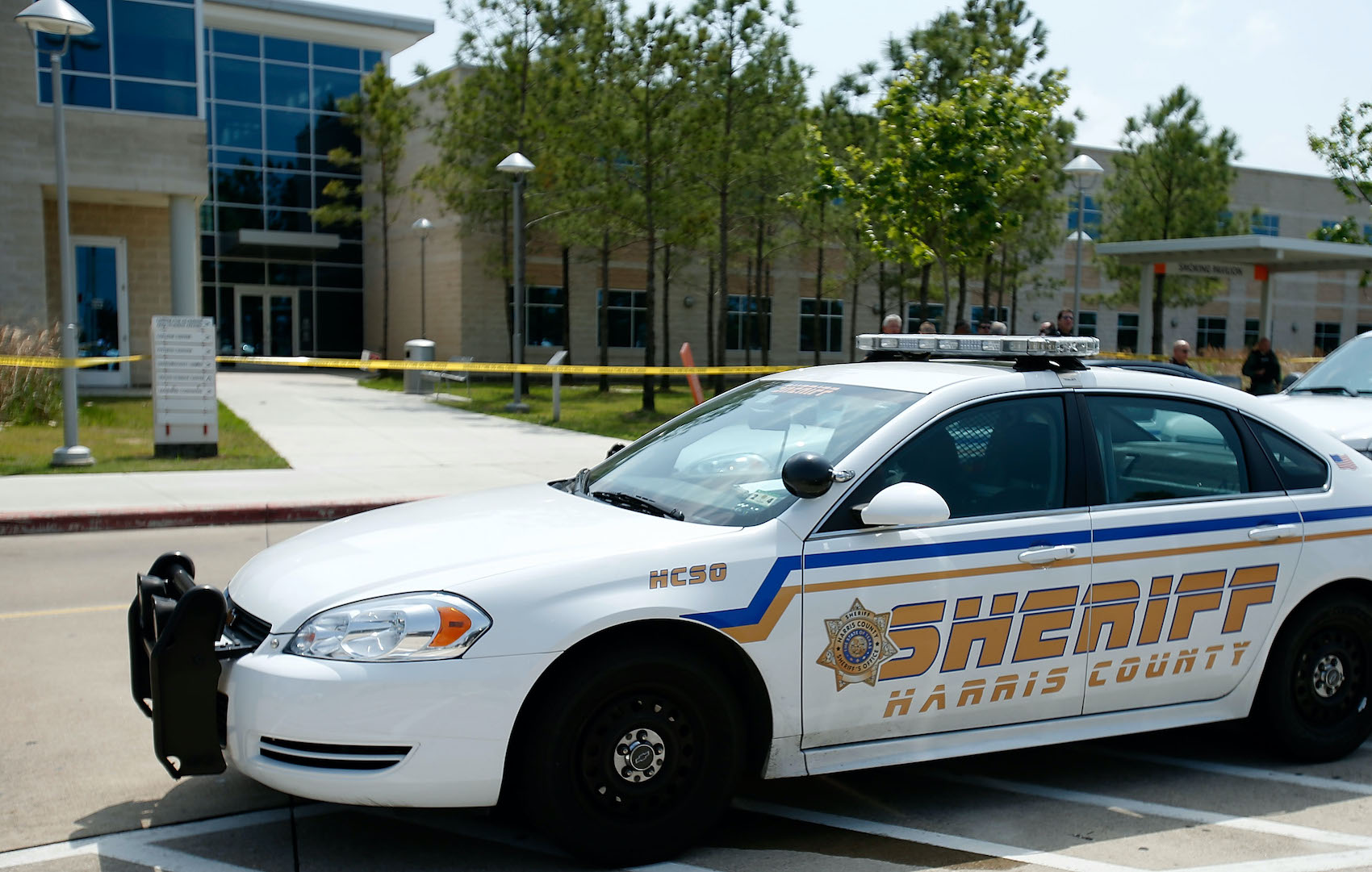 With few exceptions, news outlets in Harris County, Texas, spotlight singular instances of crime to allege that legal reform policy is a threat to the public.

The public’s perception of crime is often significantly out of alignment with the reality. This is caused, in part, by frequently sensationalist, decontextualized media coverage. Media Frame seeks to critique journalism on issues of policing and prisons, challenge the standard media formulas for crime coverage, and push media to radically rethink how they inform the public on matters of public safety.

In Harris County, Texas, a new slate of progressive judges has implemented a wide array of reforms, from reducing the use of cash bail for misdemeanors to sending far fewer children to juvenile prisons. Unfortunately, these incremental positive steps have faced substantial pushback.

With few exceptions, news outlets in Harris County spotlight singular instances of crime as proof that reform policy is a threat to the public (or would be, if it were enacted). In some cases, scrutiny focuses on judicial discretion, like this ABC 13 article from last month blasting a judge who imposed GPS monitoring and set a $200,000 bond for a defendant who allegedly committed another

This kind of lopsided reporting fundamentally misrepresents the outcomes of criminal legal reform and manufactures consent for existing carceral practices. To date, the policy shift in Harris County has not been accompanied by a narrative shift—there is a striking lack of stories about the people whose suffering is reduced or alleviated thanks to reforms. As the county works to mitigate the harms of the criminal legal system, the need for critical reporting on law enforcement practices will only grow. If journalists begin to prioritize the stories of people who are harmed by the criminal legal system, voters will have the chance to see past disingenuous law enforcement public relations efforts and support a new path forward.

In some instances, journalists seemingly have worked hand in hand with Harris County law enforcement to undermine decarceration. In November, District Attorney Kim Ogg sent a letter to the Houston Area Police Chiefs Association condemning county judges’ strict adherence to the Constitution. The letter laments a “139 percent increase” in “NO PROBABLE CAUSE” findings and alleges that the judges’ refusal to hear cases with insufficient evidence stretches the “limited resources” of law enforcement agencies. Notably, the increase in no probable cause findings occurred after Harris County elected several progressive misdemeanor court judges in 2018.

In February, local TV news station KHOU 11 released a short investigative piece on Harris County no probable cause rulings that was almost entirely drawn from law enforcement talking points. The feature uses three anecdotes and one data point to insinuate that the new progressive judges are undermining public safety.

That data point—an increase in cases that judges dismissed over a lack of probable cause—came from Ogg’s November letter to law enforcement agencies (updated with numbers through Dec. 6). The metric only compares 1,881 “no-PC cases” in 2015 with 3,969 cases in the first 11 months of 2019; perhaps 2015’s tally was simply a low-end outlier.

But even if that comparison accurately represents a shift in findings of no probable cause, the piece fails to offer any analysis of how that change affects public safety (if at all). The first subheading of the piece reads “Public Safety Risk,” but that’s just a quote from Ogg’s letter—the claim is not supported by any analysis of crime rates or public safety outcomes changed by the uptick in no probable cause rulings. If anything, the concrete outcome of this shift is that Harris County residents enjoy slightly increased protection from unconstitutional and abusive police practices.

The piece also cites questionable anecdotes to undermine the credibility of Harris County judges. For instance, Houston police told KHOU 11 about the arrest of Christopher Obryant last November for stealing “two jerky’s, one coffee, and one bag of nuts” from a CVS. Magistrate Courtney St. Julian rejected the case against Obryant, framing her finding as an act of mercy. “He had $12 worth of food and held at gunpoint,” St. Julian said in court. “I’m feeling the Thanksgiving spirit, so I’m going to find no probable cause for Mr. Obryant’s arrest.” The KHOU 11 piece then includes a quote from Houston Police Chief Art Acevedo, who accuses St. Julian of being an “activist” who failed to “follow the law.” In reality, St. Julian’s act of leniency demonstrates humanity, not activism.

If anything, the other two anecdotes cited by KHOU 11 suggest that progressive judges are very rigidly following the law. In one case, police attempted to pull over Omar Truillo because his car had no front license plate. Truillo didn’t pull over until he reached his driveway, but Magistrate Jennifer Gaut found that there was no probable cause to justify felony evasion of arrest charges because Truillo was not speeding or putting others at risk. In another, Judge Andrew Wright dismissed indecent exposure charges against Jamal Washington who
allegedly masturbated on a public bus. Wright ruled that there was no probable cause for the arrest because Washington’s genitals weren’t exposed.

These no probable cause rulings may actually reflect a deeper problem with the district attorney’s intake staff. Former Texas Court of Criminal Appeals judge Elsa Alcala suggested that the office hired unqualified intake attorneys who file cases so poorly constructed that judges must find no probable cause. Harris County Judge Darrell Jordan echoed Alcala’s analysis in an interview with KHOU 11. “The buck doesn’t stop with the judge; it’s really the DA who carries the water,” he said. “They can go back and find the errors in the case, they can refile it, and they could come right back before the judge or they can go around the judge and simply take the case to a grand jury.”

KHOU 11’s misguided take on newly elected judges in Harris County is part of a broader law enforcement-driven narrative against criminal legal reform, both in the county and statewide.

Although the new slate of progressive judges won’t be up for reelection until 2022, the story came out just a week before the 2020 Harris County primary election, where Ogg faced a challenge from the left. As DA, Ogg has struggled to mitigate the fallout from multiple scandals: her office misrepresented caseload data in a request for a $21 million budget increase and dismissed charges in a high-profile illegal gambling case last July after it was revealed that her former campaign finance committee chairperson previously worked for the poker rooms in question. Since November, Ogg has attempted to use the uptick in no probable cause rulings as a public relations strategy to defend against an increasingly crowded primary field. “This is one of many examples where Ogg tells half the story in order to paint herself in a positive light,” Judge Jordan told the Houston Chronicle in November. “If this was a true concern, why wouldn’t she come talk to the judges?”

Jordan is right to emphasize the fact that Ogg chose to bring her concerns to law enforcement instead of addressing judges directly. That choice points to a well-coordinated law enforcement lobbying effort. In multiple tweets, Acevedo explicitly tied the KHOU 11 investigation to a call for increased scrutiny of judicial discretion. “Law enforcement is rightfully under a constant microscope and all prongs of the criminal justice system need to be held accountable and under the same microscope,” he said.

It’s possible that Acevedo is simply looking for opportunities to deflect media scrutiny of his department’s January 2019 deadly drug raid that led the FBI to arrest two officers from his department. Indeed, a review of police work conducted by one of those officers found that as many as 69 defendants may have been convicted on false evidence between 2008 and 2019. If that example is at all representative of Houston police practices, it’s unsurprising that Harris County judges would use their discretion to dismiss criminal cases with insufficient evidence. Acevedo is using misleading media narratives to undermine the credibility of elected judges instead of working to improve the credibility of his own department.

Last week, Harris County Commissioner Rodney Ellis also fended off a primary challenge from Maria Jackson, a former felony court judge. The County Commission flipped to Democratic control in 2018, which is significant because the county funds courts (and therefore is in a position to support or undermine reforms implemented by progressive judges). Ellis has publicly criticized felony court judges for their resistance to reforms and was a major proponent of the county’s bail overhaul. By contrast, Jackson criticized Harris County bail reform, and she was endorsed by the Houston police union. And although no Republican will challenge Ellis in the general election, a Republican-affiliated PAC spent about $132,000 on ads supporting Jackson’s campaign.

Although Harris County has experienced a serious policy shift thanks to bail reform, that change is limited to misdemeanor courts, and the county’s felony courts have been much less eager to change practices. In this context, it’s possible to interpret former felony court judge Jackson’s County Commission campaign as part of an effort to build a “felony court firewall” against wider-reaching reforms. Harris County bail policy also has broad implications for state criminal legal policy, considering a successful implementation of reforms could be a model for other counties. The state’s bail bond agent association has used Harris County’s reforms to argue for more restrictive state pretrial detention policy. The county’s reformers have good reason to believe that the campaign against decarceration has only just begun.

Journalists in Harris County and nationwide have a special responsibility to cover criminal legal reforms in a way that doesn’t just give voice to pro-incarceration propaganda campaigns. Instead of promoting cherry-picked cases that “bleed” so they can “lead,” local news stations could instead amplify personal narratives that demonstrate how reducing pretrial incarceration helps defendants keep their jobs, provide for their families, and stay healthy. If newsrooms choose to focus on the harm reduction that accompanies criminal legal reform instead of sensational outlier cases, their audiences might not be so quick to double down on punitive impulses.

Jonathan Ben-Menachem writes about politics and culture, focusing on policing, austerity, and the criminalization of poverty.

Share:
Tags:Criminal Justice ReformMediaProgressive Judges
Previous : My View: Tough Call but the Right Call on Schools – Here’s Why
Next : “Prisons Are Known Incubators and Amplifiers of Disease,” Making It a High Risk Area for the COVID-19 Pandemic