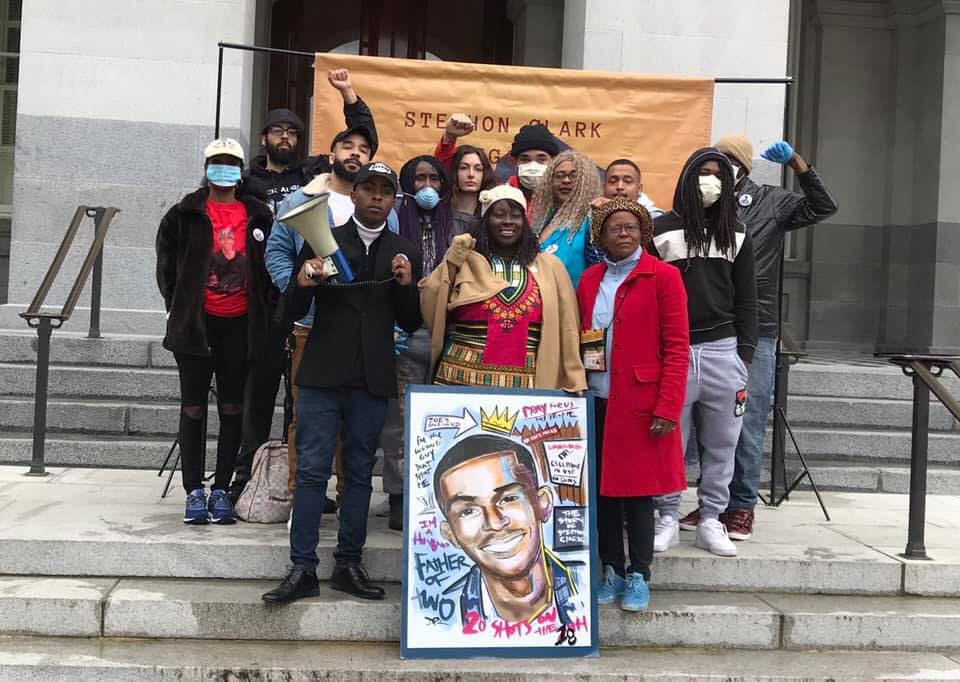 SACRAMENTO – Despite the shadow of the deadly Coronavirus COVID-19, the shooting death of Stephon Clark that rocked the Sacramento area for nearly two years was marked Wednesday at the State Capitol.

Police reform demonstrators – including the mothers of police violence from Sacramento, Stockton and the Bay Area – defied official warnings to limit “group” activities because of the Coronavirus.

Led by Stephon’s brother Stevante, the shooting death by Sacramento police officers on March 18 of Stephon Clark was remembered – while most Sacramentans seemed to be more worried about stockpiling

The “call to action” urged social justice activists to demand accountability and transparency of Stephon Clark’s killers, and local government.

Speakers called for the immediate firing from the Sacramento Police Dept. of the officers identified as responsible for shooting the unarmed Stephon Clark in his grandparents backyard – Jared Robinet and Terence Mercadal.

They should be, said demonstrators, “charged to the fullest extent of the law in open court by a jury of their peers.”

“Additionally, we call on all local organizations and interest groups to support a recall of District Attorney Anne Marie Schubert for a failure to bring charges against Officers Robinet and Mercadal,” according to organizers.

“Two years later and we as the community of Sacramento are still waiting for #Justice4StephonClark while his murderers remain employed and at work ready to kill again,” they added.

They called for “retribution” for the Sacramento officials who “should be held accountable for failing to uphold the 6th amendment guaranteeing a fair trial.”

Demonstrators called for “change,” specifically: “More laws to govern police and keep them in a position of transparency and accountability including an independent civilian review board with enforcement powers, the removal of School Resource Officers (SROs) from our local schools and retroactive accountability for all killer cops to make sure that this does not happen to anyone else again.”

Share:
Tags:Cres VellucciPolcie ShootingStephon Clark
Previous : Guest Commentary: Boots on the Ground
Next : Sacramento Superior Court – Like the State – Locks Down for the Month. At Least

3 thoughts on “Despite Shadow of Coronavirus, Stephon Clark’s Shooting Death by Police Remembered”