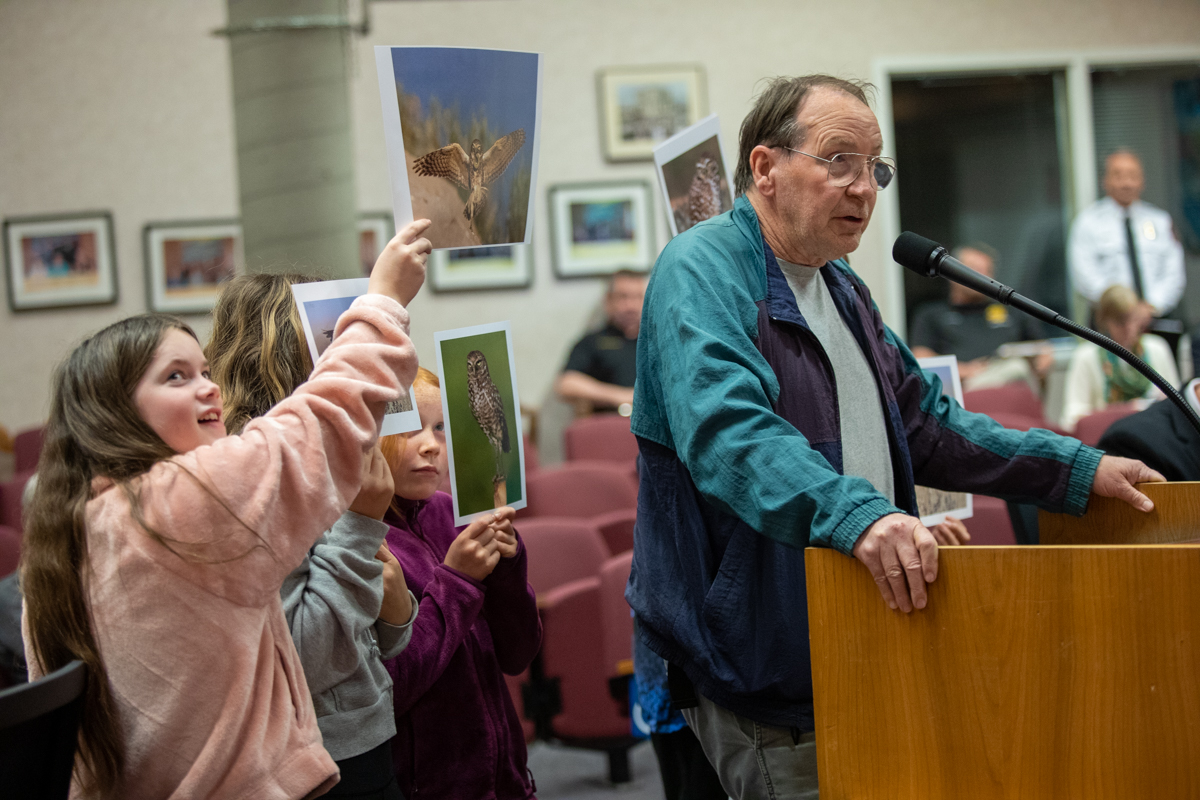 Mace-25 is an 25-acre City-owned site purchased by the City of Davis with Open Space tax revenues. The Open Space Ordinance passed by the voters of Davis says such lands purchased with tax monies are to be kept in perpetuity as open space.  Up until now, Mace-25 has been leased only for dry-land farming for a nominal annual amount or lay dormant. Directly adjacent and northwest of this site on County-owned land on the Mace curve are where Burrowing Owl burrows have been established and maintained for at least a decade. Mace 25 is in the middle of an historic burrowing owl breeding colony. At least one of the burrows is currently occupied by a nesting pair of Burrowing Owls – one of the few remaining breeding pairs in Davis. These burrows have been repeatedly used year-after-year while using the Mace-25 land as foraging habitat.

Directly south and east of Mace-25 and north of I-80 are approximately 200 acres of farmland which is proposed to be annexed into the City and converted to a business park by the local developer and oil distributor, Ramco. Ramco’s original development proposal in 2016 included building on all of the Mace-25 land for inclusion in the business park. Public outcry over this taking of city-owned and taxpayer-funded open space, however, caused the developer to withdraw the idea of including all of Mace-25 as buildable land when they revised their proposed project in 2019. Now they only want to “take” about 9.2 acres of the Mace-25 City-owned land and use it for their “agricultural buffer” required under Davis zoning laws affecting new development bordering existing ag lands.

Complicating even this new plan, however, was the ongoing presence of the Burrowing Owls directly adjacent to Mace-25. If the developer’s plans could theoretically impact the Burrowing Owl population (which likelihood MUST be quantitatively addressed in the forthcoming Environmental Impact Report on the project), then the developer could be forced into expensive and time-consuming mitigation measures.

A City Staff memo recently revealed a previously secret plan to intentionally and stealthily drive one of the few remaining pairs of breeding Burrowing Owls left in Davis off of their nesting sites adjacent to Mace-25. Staff’s ONLY reason for doing so, now admitted in the same Staff memo, is that they do not want the owls to nest on the adjacent City-owned Mace-25 open space land because they do not want to have to “evict” the owls later IF the site is ever “urbanized” (e.g. developed for the Aggie Research Complex).

The truth, however, is that not only would the developer have to “evict ” any owls on Mace-25, but they would have to provide vastly increased mitigation lands elsewhere that must be suitable for such Burrowing Owl habitat as recommended by a licensed expert. This could prove to be very expensive and time-consuming to the developer. It would be far better for the developer if the Burrowing Owls were never even there when the project starts construction in the future and that’s what Staff is seemingly scheming to accomplish.

The City says they are going to accomplish this “voluntary” relocation by letting the grasses and weeds grow so high on the Mace-25 City-owned property that the owls will be unable to forage in the tall plants nor be able to see predators approaching their burrows. So functionally the City is saying they are going to starve the owls out or make it more likely that predators will kill the small owls. This environmentally repugnant act is actually sanctioned by the current City Manager Mike Webb and Assistant City Manger Ash Feeney (who is charged with ushering in the Aggie Research Complex business park) with the complicit cooperation of City Wildlife Manager John McNerney.

The Memo Exposing This Scheme

If you find it hard to believe that the City could be so environmentally callous and behave in such a ecologically reprehensible manner, the following memo will confirm their intentions. It was written to Burrowing Owl Preservation Society (BOPS) President, Catherine Portman, by City Staff. This memo (with emphasis added) was in response to BOPS request to the City to allow them to install an artificial owl burrow on Mace-25 at BOPS sole installation expense and maintenance cost to improve the habitat on Mace-25 for Burrowing Owls. 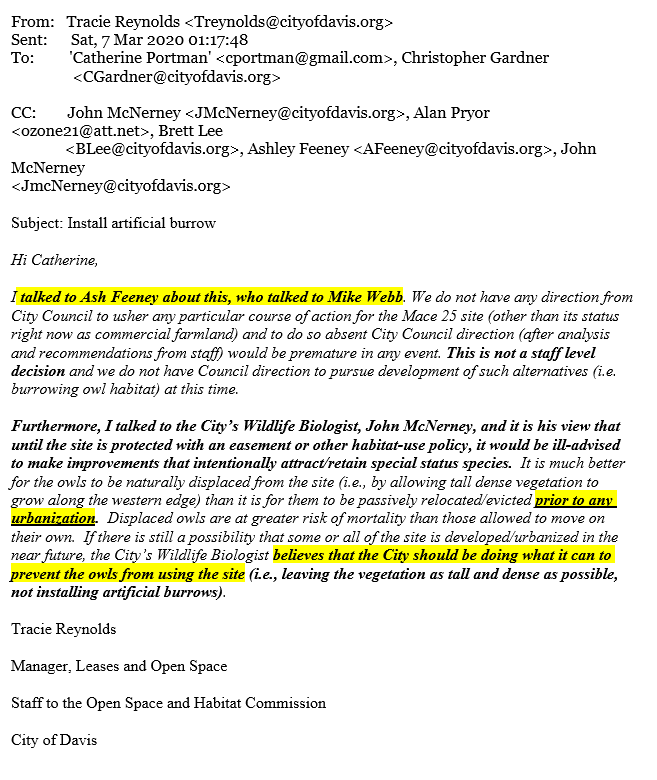 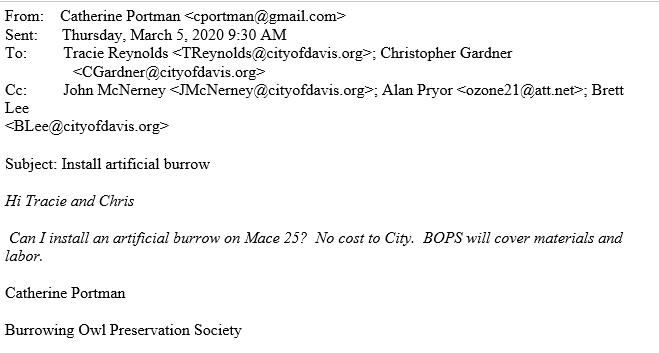 Staff’s Plan is a Gross Violation of Public Trust

Even though Staff has said they have no direction from Council to manage the Mace-25 land for any specific purpose, in fact they are de-facto expressly managing it for the eventual benefit of the business park developer – and to the extreme detriment of the resident Burrowing Owls. It is almost unbelievable that City Staff has knowingly and willfully conspired to force out a California Species of Special Concern away from a City-owned Open Space to serve a developer’ needs and the attendant economic needs of the City for construction and property tax revenues. This is clearly an egregious breach of the public trust in our City government.

It is even more outrageous when one considers the developer who will benefit from this killing is Dan Ramos of Ramco, the developer of the Aggie Research Complex business park. Long time Davisites will remember it was Dan’s father, Frank Ramos of Ramco, who flagrantly and intentionally violated the law when Ramco disced under burrows and killed owls almost exactly 20 years ago in the development of Mace Ranch Park. It seems the current acorn (Dan Ramos) has indeed, not dropped far from the tree (Frank Ramos). The only difference now is Dan Ramos has City Staff to do his environmental “modification” for him. What is also amazing in the City’s memo is their clear acknowledgment that “urbanization” of Mace-25 is even being considered since it is otherwise supposed to be protected as open space “in perpetuity” under the City’s voter-approved Open Space Ordinance.

Has Staff Gone Rogue or is the City Council Complicit?

The Staff memo also claims that Staff’s actions must be taken because they are consistent with Council policy on this plot of land. Well last year, representatives of the Burrowing Owl Preservation Society, the Sierra Club Yolano Group, and Yolo Audubon individually met with everyone on the current City Council to advocate for retaining ownership of Mace-25 and not selling it to Ramco for inclusion  in the Aggie Research Complex as proposed by the developer. Further, we advocated for conservation of the property as California Prairie Grassland which is a unique and diverse ecological environmental that was once widespread but that has been decimated in California due to rapid sprawl of cities and agriculture. We noted that this type of rapidly shrinking ecological niche is critically important for nesting and foraging by Burrowing Owls.  We also claimed the minimal revenues received by the City by leasing the land for agriculture were minuscule compared to the value of the land as conserved open space on which a protected species is struggling.

Each of the Councilmembers expressed their desires to have Mace-25 either maintained as habitat or at least they wanted a public discussion to be held at the Council level with input by the Open Space and Habitat Commission and Staff.  Well, the Open Space and Habitat Commission held their meeting and their minutes reflect that they unanimously agreed that Mace-25 should be kept as Open Space for burrowing owl habitat, farming, passive recreation, or a combination of the three.  At least one current Commissioner claims that the question of intentionally driving or keeping out Burrowing Owls from Mace-25 was NEVER even discussed by the Commission or proposed by Staff.

But despite being promised that the subject of Mace-25 land use would be publicly discussed before the City ceded control to Ramco, City Council has, in fact, seen plans by Ramco to take as much as 9.2 acres of the Mace-25 land and use it for a buffer zone for their massive business park. There has not been any objections voiced by any Council member against this new developer-driven plan to partially use Mace-25 nor any calls for public discussion.

And there has been absolutely no discussion of what, if anything, the developer Ramco would pay to use this land which clearly furthers their business park development goals. Further, the developer has even refused to commit to any details as to how the ag buffer land they would be granted at Mace-25 would be used or maintained saying such decisions would only be made AFTER the business park has been approved by voters. Judging from past actions from Ramco with respect to preservation of Burrowing Owl habitat, however, this does not bode well for our amazingly endearing feathered friends at the site.

The discrepancy between what we were individually told by individual Council members last year and Staff’s current actions means either that 1) Council has not given any direction at all to Staff and Staff is ignoring the intent of the Open Space ordinance to preserve open space in perpetuity, or 2) Staff is ignoring any directions from Council to preserve the land until a public discussion is had, or 3) the City Council is complicit and approves of these actions by Staff. No matter which of these options are true, it does little to foster faith in our City government.

City Staff has a History of Burrowing Owl Habitat Mismanagement

We also noted in our meetings with the Council that the Burrowing Owl population in Yolo County has decreased by about 75% in the last decade and by at least that amount in Davis. Locally, we know a primary contributory cause is gross mismanagement of Burrowing Owl habitat on public lands owned and/or maintained by the City.

The City’s track record in maintaining Burrowing Owl habitat on other public lands managed by the City under the current Wildlife Manager, John McNerney, has been dismal indeed. One only has to look at the City’s woefully inadequate efforts to fulfill their contractual obligations to maintain Burrowing Owl habitat by mowing excessively high grasses and weeds at the Burrowing Owl Preserve at Grasslands Park and the ag buffer at the Wildhorse Golf Course. Both of these sites had numerous breeding Burrowing Owl pairs ten years ago but irresponsible and incompetent management of the grass height at each of these sites has resulted in all of those owls being killed or “voluntarily” relocated”. Mr. McNerney is actually getting pretty good at mismanaging Burrowing Owl habitat and almost our entire population of Burrowing Owls has been driven away from Davis or killed in only 10 years. I have no doubt Mr. McNerney would have also been similarly successful in driving the Burrowing Owls away from Mace-25, with the approval of senior City management, had we not exposed Staff’s secretive plan.

Enough is enough! It is time to stop this assault on our Burrowing Owls’ population  in Davis by City Staff whose only commitments are to developer’s profits and future City construction and property tax revenues. .

Please demand that Council order the City Manager to just mow the grass on Mace-25 and to keep it mowed according to the long-standing recommendations of BOPS.

24 thoughts on “Guest Commentary: Accusation that City Is Intentionally Driving Burrowing Owls Out on Mace 25”