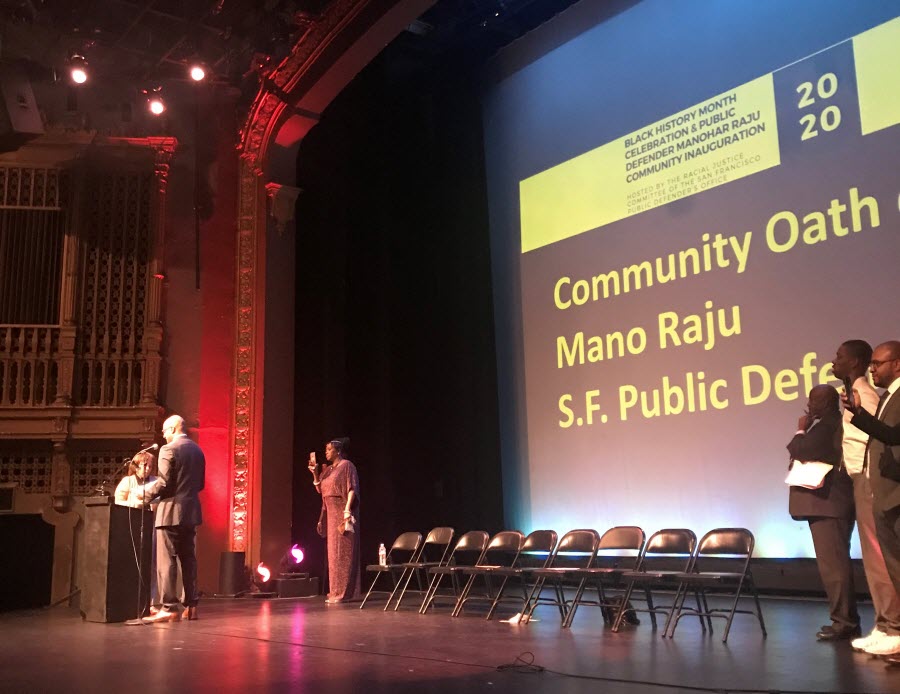 His oath was administrated by Gwen Woods, mother of Mario Woods, who was shot and killed by San Francisco police in 2015.

Before administering the oath, Gwen Woods, surrounded by a group of mothers who have lost their children to police violence, urged Raju to “stay hopeful” and to remember that the people he and all public defenders serve have a story, and to “hear it.”

Woods, who is from the Bayview in San Francisco, said that she has spent her whole life combatting stereotypes about her community. “Hope runs out because the narrative becomes so redundant. When you grow up in a community where black boys tell you, ‘I’m not going to live to see 25,’ that’s a hopeless society,” said Woods.  She implored Raju to, “Let them know they count, they matter.”

Public Defender Raju’s social justice oath emphasized his commitment to serve San Francisco’s most vulnerable communities with an understanding of our shared humanity and pledged to “see all the beauty, power, and potential of each person I defend.”

Raju stated in his speech that, “This shared humanity is why we aggressively litigate our cases and humanize our clients to judges and juries, and why long after

the cases are done, we are also fighting to connect our clients with the treatment, employment, and housing they need to stay out of the system and be with their loved ones and communities.” He further stated that, “Serving clients with the utmost integrity, to me, means rejecting the stereotypes and narratives about who our clients and their communities are, and fighting for their right to be treated with dignity.”

Supervisor Walton said, “Having a public defender for the people is imperative. By having a community inauguration, it definitely sheds light on the type of person he is. I am proud and excited that Mano is carrying on the legacy of fighting for justice at the Public Defender’s Office.” Walton noted that Raju is already working with the Board of Supervisors on issues of police accountability.

Deputy Public Defender Niki Solis, Chair of the Racial Justice Committee, said that public defenders are “on the frontier of a civil rights battle” and are uniquely positioned to effectuate change in a system that overwhelmingly incarcerates people of color and disproportionately removes African American children from the home or places them on electronic monitoring. Solis noted, “We call out racism when we see it.”

Youth Commissioner Jones, who serves on the working group helping to rewrite the San Francisco police department’s general orders about bias in policing, noted that Black youth are underrepresented in the conversations where decisions are made, and urged his fellow youth to, “Make them put us in positions to really respect us and hear us out.”