SACRAMENTO/WOODLAND – Faced with proclamations by the federal government and state government to limit “crowds” to no more than 10 or even zero, Yolo and Sacramento Superior Courts announced late Monday they are essentially shutting down operations.

As the VANGUARD found in an investigation made public Monday, the counties were not practicing the “social distancing” stressed by federal, state and local health officials to help stop the spread of the deadly COVID-19 – as such they were potential seeds of the virus’ spread.

The VANGUARD reported that hundreds and hundreds of potential jurors were still being jammed into Sacramento and Yolo county courthouses – first crammed shoulder to shoulder in the jury check-in room, and then all sitting in one room waiting to be called.

Even when jurors break down into jury panels, there will be 60 or so per panel packed into a courtroom for jury selection. And after that, there’s 14 jurors, and alternates sitting about a foot from each other, joined by a prosecutor, defense attorney, judge, clerk, bailiff and witnesses – let alone observers – in each jury trial courtroom, some as small as a home’s living room or so.

But that all changed by Monday night in Sacramento County. 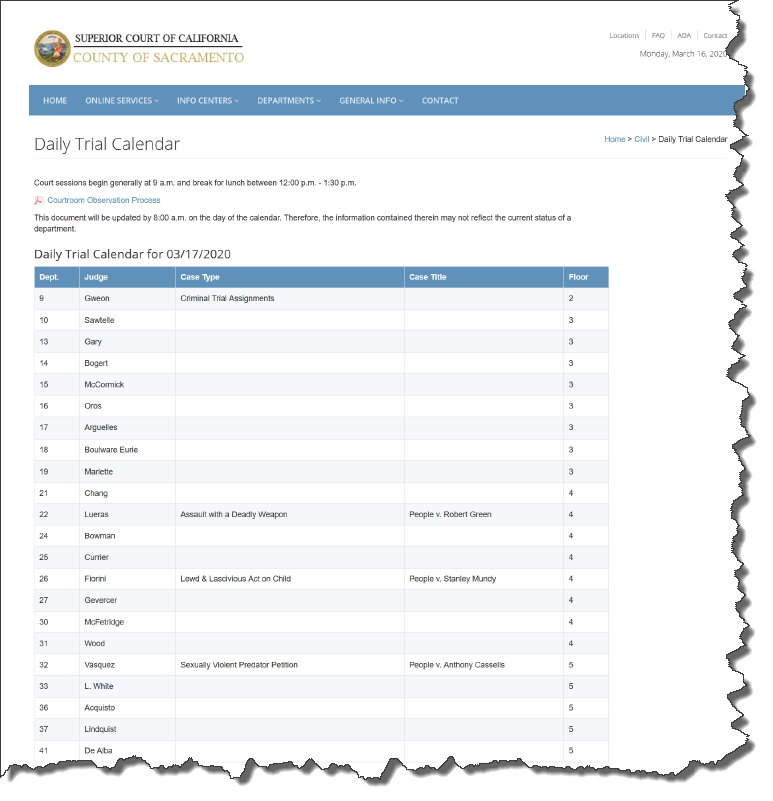 Felony and misdemeanor trials at the downtown courthouse are no more – the nearly 50 courtrooms covered six floors will be empty, save a couple of trials just waiting for the jury to return, according to a “Daily Court Calendar.”

The county statement reads, in part:

“Although these measures will significantly reduce the number of people entering court facilities, we recognize that this situation is constantly changing and may necessitate the court to take more extreme measures including closure of all court facilities and court operations other than those deemed critical.

“However, we will continue to serve the needs of the most vulnerable people in Sacramento County – our children, the elderly, domestic violence victims and people whose life and liberty interests are at stake…we are implementing (a) Continuity of Operations Plan (to) reduce the number of visits by the public to court facilities to promote public safety and health while protecting liberty and due process.”

In Yolo County, the county superior court issued a news release stating that, until April 1, courthouse clerk windows will be closed, as will be the Self-Help Center. All traffic cases will be continued and those scheduled for jury service are being told their service will be “rescheduled.”

The Yolo County statement emphasized, “Access to justice is an important right of each citizen. The decision to limit functions within the court was made based on state and federal health officials and in an effort to protect the public and staff from exposure to COVID-19.

“Further adjustments may be made to the court’s calendar, depending on the changing circumstances of the public health threat of COVID-19. The court will monitor the situation and continue to consult with the Judicial Council and local public health officials.”

Before the changes, one Yolo County attorney seemingly spoke for other lawyers concerned about crowded courtrooms, noting, “Jurors are all brought together in the jury assembly room, which is referred to as an airport terminal, and they’re made to sit for hours together. Think about it. The entire process doesn’t work in light of current instructions.”

“People were afraid to shake hands, even in the context of a group of professionals who should be counted on to have good hygiene habits. The big concern is that the crowds of people waiting for cases to be called poses a real problem of spreading the virus,” he said, adding, “The consensus appeared to be that all of us anticipate the courts being closed in the near future.”

Turned out he was very prophetic.

Los Angeles County, Contra Costa County and many other superior courthouses in the state reportedly are going to put jury trials on hiatus and either have or will do what Sacramento County and Yolo County courts announced Monday.

Best quote of the week that epitomizes what Sacramento and Yolo lawyers believe, but won’t say publicly, probably comes from Miami lawyer Jonathan Blecher, who rescheduled one routine case to avoid going in on last week.

“The justice building is like the bar in ‘Star Wars.’ It’s a crazy place where anything can incubate, and people are coming from all over the place. I would rather not be there.”