On Friday we closed our local schools starting Monday for four weeks.  Probably longer.  The rate at which public events have proceeded is mindboggling, considering we went from a series of precautions to a series of shutdowns in a matter of a few days.

Last week Italy became the first European nation to basically do a shutdown.  That has been followed now by Spain and France.

The New York Times reports, “Across Europe, there was a widespread feeling that the health crisis flaying Italy for weeks had arrived at the doorsteps of its neighbors, and that the time for hoping

the threat would somehow dissipate without sweeping intervention was over.”

France has had trouble getting people to stay home—until Saturday, cafes and restaurants remained busy, but now officials are saying “the crisis could be disregarded no longer.”

Writes the Times, “The time of classic Parisian nonchalance had come to an end.”

They quote one leader saying, “Our society is more libertarian…  As long as you don’t put people under any real constraints, they’re going to continue to live the way they want.”

In Davis, the streets are more empty.  Parking places on Saturday afternoon in the downtown, normally jammed, were half empty… or less.  Supermarkets see shelves bare, at least where water and toilet paper are sold.

My question is, where are we headed?  Are we headed for a lock down like Italy, France and Spain? 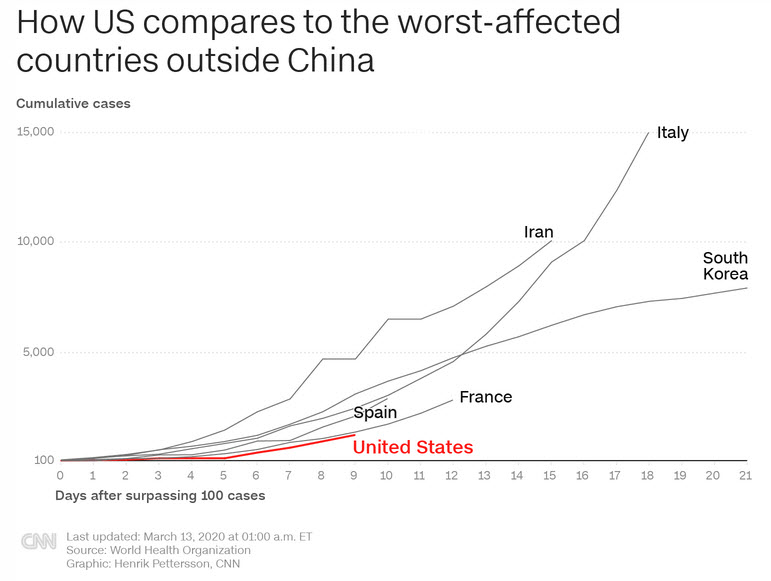 The answers are not appearing in the news accounts—at least not yet.  What should concern us perhaps most is the prospect that people can transmit before they get symptoms, and our lack of available testing makes it hard to self-quarantine and difficult to know how serious a crisis we already have.

While the federal government has been criticized for a slow response, state and local governments have stepped up and made difficult choices.

But in a country that values freedom, how effective will self-quarantine measures be?

The US has been a bit more lucky in this crisis so far, in that our exposure to the virus came a little later and thus we can watch what other countries are doing.  Those countries already in mid-crisis can provide us with guidance.

Look at the chart—first note it is from Friday morning, and that means two full days ago.

That is a lifetime in the course of this virus.  The New York Times reports this morning that the new measures in France came after a doubling of cases to 4500 with 91 deaths and another 300 people in critical condition.

There is comfort and alarm in the chart.  We can see the trajectory of Italy, the first country to impose such severe conditions in Western Europe.  Then we can see Spain.  Finally there is France, which seems to be closest to the path of the US—extend that chart out by two days to 4500 and that could be the path that the US is on.

The NY Times reported this morning that the US has 2759 known cases—bad news for us is that one of the big concentrations is around the Bay Area, lagging behind only Washington and New York.

The chart might be false comfort.  Without widespread testing, we may only know the tip of the iceberg here.  As testing improves the number will go up.  By how much?  At what point will our health care system be overwhelmed by this?

On Friday, CNN compared the responses between South Korea and Italy.  On the chart you can see that Italy continued to explode while South Korea has flattened its curve.

The two countries are similar in population, reported their first infections around the same time and reported a rapid rise in cases initially.

However, South Korea has a low death rate of less than one percent, while Italy’s is over 14 percent as of Friday— “the country reported another 250 deaths in just 24 hours. More than 1,200 people have died in Italy, which has more than 17,600 cases, officials there say. The global average death rate is currently between 3-4%.”

Meanwhile, South Korea believes its outbreak has peaked.  The number of confirmed cases has slowed and they have been most ambitious in tracking the virus, “using smart technologies to trace, test and treat people.”

Under its health care system—that’s right, universal health care—the country is diagnosing 15,000 per day and over 200,000 in total as of Friday.

CNN notes that one lesson the US has taken on board is setting up the drive-through testing booths which allows people to get tested while reducing face-to-face contact.  The President is working to expand locations across the country.

Compare that to Italy where they could not even identify the first person who brought the virus into the country.  “That made tracing who that person had come into contact with impossible.”

Italy already had a poor economy, which has left them economically vulnerable and resulted in cuts to what was once a good health care system.

That has left them in trouble: “The country has been desperate for more beds, face masks and ventilators to deal with the high volume of coronavirus patients.”

Where does the US end up?  The scariest part of this is we lack good data on where we are.  Until we have that, we won’t know.

There are many who believe that US citizens will not tolerate the kind of draconian restrictions we have seen in Italy, France and Spain.  Perhaps learning from their lessons, we will see clearly what works and what doesn’t.

But, given the rate of change, it is anyone’s guess what next week will bring.  My guess is we have not reached the equilibrium point of being able to ride this out.  That is still to come.

34 thoughts on “Sunday Commentary: Where Are We Headed with Coronavirus?”