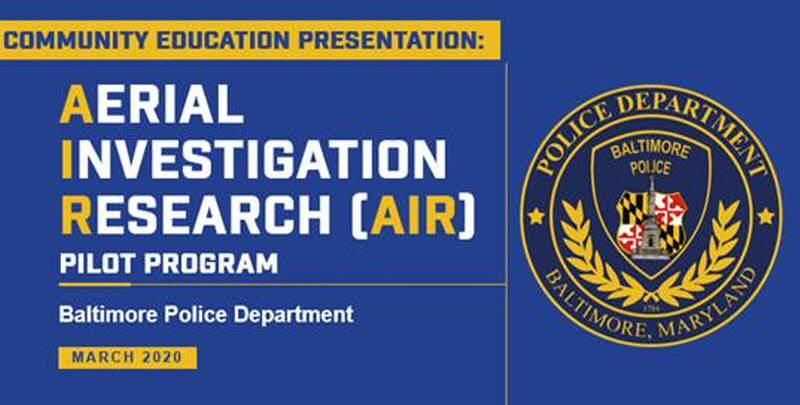 BALTIMORE – The American Civil Liberties Union (ACLU) has filed a lawsuit against the Baltimore Police Department (BPD), arguing that the department’s new Aerial Investigation Research (AIR) program “presents a novel and society-changing threat to individual privacy and to free association, and it violates the Constitution.”

AIR is an aerial surveillance program, contracted from a private company called Persistent Surveillance Systems (PSS), in which “planes will fly over Baltimore at least 40 hours a week” and “collect images of over 90 percent of the city at a time,” according to ACLU. It would be the widest-reaching form of surveillance to ever be used in an American city. The BPD website states that the department is “committed to transparency in its operations and administration.” However, the suit against them stated that “the BPD and PSS initially deployed this technology for several months,” in 2016, “keeping it secret from the public, the Mayor of Baltimore, and the city’s prosecutors.” It recorded over 300 hours of footage of regular residents around the city. Once the use of the system in the city was discovered, the surveillance was halted. The ACLU claimed that the recordings gathered during that time have been saved indefinitely by Persistent Surveillance Systems.

This aerial surveillance technology was first developed for military use in battlefields abroad.
The BPD plans to deploy the same technology for municipal use.

A lawsuit condemning the surveillance program was filed on April 9, 2020, by Ericka Bridgeford, a black activist focused on social justice issues in Baltimore, and Leaders of a Beautiful Struggle, a grassroots think tank that works to promote the public policy interests of the Black community in Baltimore.

Dayvon Love, the Public Policy Director of the think tank, commented on the program in question, stating that it “gives law enforcement new and improved tools to watch and potentially harm people

who challenge the dominant social order and power structure.”

In the lawsuit, the ACLU argued that the surveillance program is “unlike lawful forms of aerial surveillance.

“The warrantless AIR program subjects…virtually all Baltimore’s 600,000 residents to long-term, wide-area, and indiscriminate surveillance that will capture the whole of an individual’s movements and thereby reveal their privacies of life,” the lawsuit added.

The ACLU called the program “a dystopic violation of our constitutional right to privacy,” a right that, although not directly mentioned in the Constitution, has been recognized in multiple amendments, as stated by the Supreme Court.

“The spy plane program is a privacy nightmare come to life,” expressed Dana Vickers Shelly, the Executive Director of the ACLU of Maryland. In her statement, she added that “a city [Baltimore] with a terrible history of racism and lack of accountability for abuses by police should be the last place a secret program of mass surveillance is used.”

“Like most police technologies, it [the AIR prgram] will hurt Black and brown communities – the most vulnerable to racist and abusive policing,” expressed the ACLU.

In a letter to the Baltimore Board of Estimates, the Police Commissioner, Michael S. Harrison, advocated for the AIR pilot program, stating that “will be used for investigative ‘look-back’ after an incident has occurred and can only be used after receiving a case number or incident number.”

Harrison also stated that the flight operations will have a limited scope. The program will be focused on the following crimes: murder, non-fatal shootings, armed robberies, and car-jackings,” he wrote.

“Baltimore is not a battlefield, and its residents are not the enemy…spy planes should never be used under the guise of public safety,” said the Executive Director of the ACLU of Maryland in a statement.

Within the same day that the lawsuit was filed, the Baltimore Police Department responded by agreeing to “halt its spy planes until a federal court hears [the] case later this month,” the ACLU stated in a tweet. The organization called this victory “one step forward to putting a stop to this Orwellian technology,” referring to the dystopian society controlled by mass surveillance in George Orwell’s novel, Nineteen Eighty-Four.