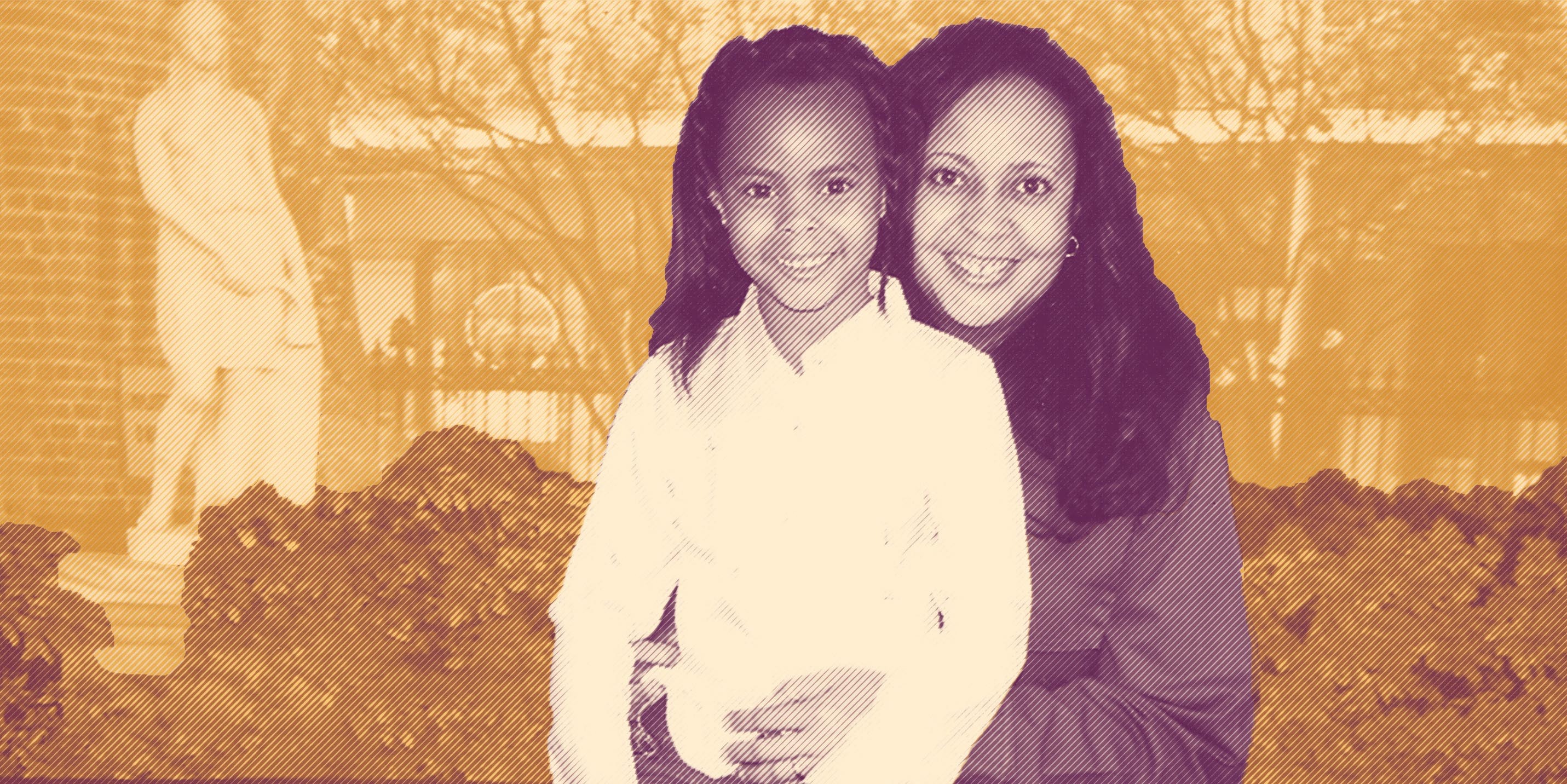 It took a few seconds for Chalana McFarland to grasp what was happening. Her name was one of just a few on the list of people who would be released from prison early due to COVID-19. Behind her stood a line of dozens of other women waiting to see if they made it. Only some of them had. But as Chalana received the news, they started cheering, and caused such an uproar that the correctional staff had to reprimand them. That’s when it finally clicked for Chalana — after 15 years in prison, she was finally going home.

“I was watching a movie with my roommate when I got the news,” says Nia, who is 19 and lives in Tallahassee, Florida, where she attends university. “At first I was like, ‘What?’ I didn’t think it was real. Then I just fell over crying. I couldn’t even talk. Later, when we talked on the phone, I could hear the happiness in my mom’s voice that this was all finally going to be over.”

My greatest fear is to die in here.

A number of prisons and jails across the country have begun to release people who are vulnerable to COVID-19 due to age or underlying health conditions, or people who are incarcerated while awaiting trial. This is the result of pressure from public health officials, advocates, and corrections officials. But the coronavirus poses a threat to all incarcerated people. It can spread rapidly in jails and prisons, where social distancing is impossible, access to hygiene is lacking, and medical care is inadequate. If even one person becomes infected, the potential outbreak could be devastating. There are already more than 10,000 confirmed cases of COVID-19 in state and federal prisons and jails combined, and this is despite the fact that testing is impossible in most facilities. Facilities including Rikers Island jail in New York, Oakdale federal prison in Louisiana, and many others have already

Chalana knew that as a Black woman with asthma, high blood pressure, and sickle cell trait, she was at a higher risk. She feared that her 30-year sentence in federal prison for mortgage fraud would become a death sentence if she remained in prison.

“My greatest fear is to die in here,” she told the ACLU by phone from the prison. “We try to stay away from each other so as to not pass it,” but there is only so much they can do.

The FCI Coleman facility in Florida houses roughly 400 women. Chalana describes their quarters as tightly-packed cubicles with three walls and no ceiling — about the size of a walk-in closet. Each cubicle contains a bunk bed, but because many of the women are elderly or have medical conditions that impede mobility, the bunks are often cut in half and laid side-to-side, taking up almost all of the floorspace.

“Only one person can move around at a time,” says Chalana. “You can look over the wall and see the person next to you. So if someone gets COVID-19, they’re going to give it to the next person and probably the person on the other side of the wall as well.”

If someone gets COVID-19, they’re going to give it to the next person and probably the person on the other side of the wall as well.

The women at Coleman have already suffered other infectious outbreaks this year. In the winter, flu and Legionnaires spread throughout the facility, hospitalizing several women and overwhelming the prison’s already-overstretched medical staff.

Approximately 40 percent of people in jails and prisons suffer from at least one chronic health condition, and jails and prisons tend to have substandard health care, even on a good day. Often, there are simply not enough medical staff to treat the hundreds or thousands of people living in the facilities.

“It’s not humanly possible to treat the number of people they have,” says Chalana. She says that if someone feels they are sick, they need to fill out a slip and give it to the prison’s medical staff, who then determine whether they need to see a doctor — without examination. Those who are selected can wait up to two weeks to actually see the doctor. The procedure is no different for people with COVID-19 symptoms, who are sent back to the dorms while they await care. “It’s like Russian roulette,” says Chalana. (The Bureau of Prisons did not respond to a request for comment on the care provided at Coleman.)

You feel helpless. There’s someone that you love and care about so much, and it seems like no one else really cares about them.

“The longer you’re here, the more you realize that you have to take care of yourself and the others around you as much as possible, which means that when someone’s sick, we all pull together to see what kind of over-the-counter medicines we have to help the person,” she says. “We make tea. We make chicken soup. We do what we can to try to help each other, but when it’s something that’s viral like the coronavirus, there’s nothing we can do about it.”

The threat of COVID-19 came to light gradually at Coleman. Most of the women learned about the virus from friends and family members on visits or phone calls.

“Once we saw the news about the county jails, and what was happening at Oakdale, that’s when the alarm went off that we were really in danger,” says Chalana, referring to the federal prison in Louisiana where the COVID-19-related death toll is rising.

“You feel helpless,” Nia tells the ACLU. “There’s someone that you love and care about so much, and it seems like no one else really cares about them. So I was just praying, hoping, and waiting because there was nothing I could do.”

Inside Coleman, Chalana was concerned about her family’s safety, too. “We worry about them just as much as they worry about us,” she says. “My parents are both 76 years old, and I worry every day that they’re going to go to the market and contract COVID, and I won’t get to see them while they’re still alive.”

“I came to understand that justice and fairness can be incongruent,” she says. “As an attorney, wife, and mother of a 4-year-old, my life as I knew it came to an end.”

Nia was too young to remember. “I don’t have a lot of memory of my mom not being behind bars,” she says. “My whole life I’ve always imagined what it would be like to have my mom actively present in my life. I didn’t expect that to happen until I was in my 30s.”

For the last 15 years, they have stayed connected as much as they could through letters, video calls, and regular visits. Chalana would mail Nia items she made in prison, like bags she knitted for her to take to dance class and folders she decorated for school.

“It was like cool, customized stuff that nobody else had,” says Nia. “And it made me feel like she was there, even though she couldn’t physically be there.”

Still, there were always significant barriers between them. They have never been able to spend more than a few hours together at a time, and that time is always shared with others. Chalana has never seen Nia dance or play basketball, and she missed her baptism. She’s missed every graduation since kindergarten, including Nia’s high school graduation, where she delivered a speech as senior class president.

Nia’s speech was about her mother.

“It was about not letting your circumstances define your destiny,” she tells the ACLU. “Just because you’ve been dealt certain cards in life doesn’t mean you can’t change and be a successful person on your own.” She wrote the speech with Chalana’s help and read it to her over the phone for practice.

Now Chalana hopes to see Nia’s college graduation. But most of all, she looks forward to spending time with her daughter without any barriers between them.

“I’ll finally get a chance to know who my daughter is,” says Chalana. “To just snuggle on the couch with her and find out whether she’s as much of a Star Trek fan as I am, or if she doesn’t like asparagus or something like that.”

The upcoming release — any day now — is hard for Chalana to talk about without getting emotional. Her reunion with her family was always going to be momentous, but amid the COVID-19 pandemic, there is an added element that perhaps wouldn’t have been top of mind under different circumstances: their health. Chalana knows she is also lucky to be able to reunite with her family while they are all still healthy.

Though Chalana made the list of releases, her fight to get out of prison isn’t over. Today, she’s sifting through a mountain of paperwork to leave Coleman — which is much harder than getting in, she’s realized. She still doesn’t have a release date and the thought of it is still surreal: “It’s sort of like, ‘Okay, God, please let this all be real.’”

The world Chalana returns to will also be far different from the one she left behind 15 years ago. She’s returning to a pandemic-stricken world where people are staying six feet apart and wearing masks in the street, where stores and restaurants are shuttered and whole cities and states are required to shelter in place. But she’s not worried about what life will be like under quarantine.

“Every day people are saying how frustrated they are being quarantined and how they’re going stir crazy inside,” says Chalana. “Well, that’s our lives every day. Just imagine what you’re going through now on quarantine, but you can’t control what time you go to bed, eat, or shower. There’s no TV, no internet, no computers. That’s a small taste of what our life is like in prison.”

Chalana knows that some people will say “you did the crime now do the time.”

“I get that,” she says. “But at the same time, we’re people too. We’re your mothers, your daughters, your neighbors, your friends … I don’t deserve to die in here, and none of these ladies do.”

Share:
Tags:ACLUCoronavirusPrison Release
Previous : My View: Why Wait Till 2045 for Carbon Neutrality
Next : THE VANGUARD Asks SF Courts to Allow Press Access to Courtroom Proceedings