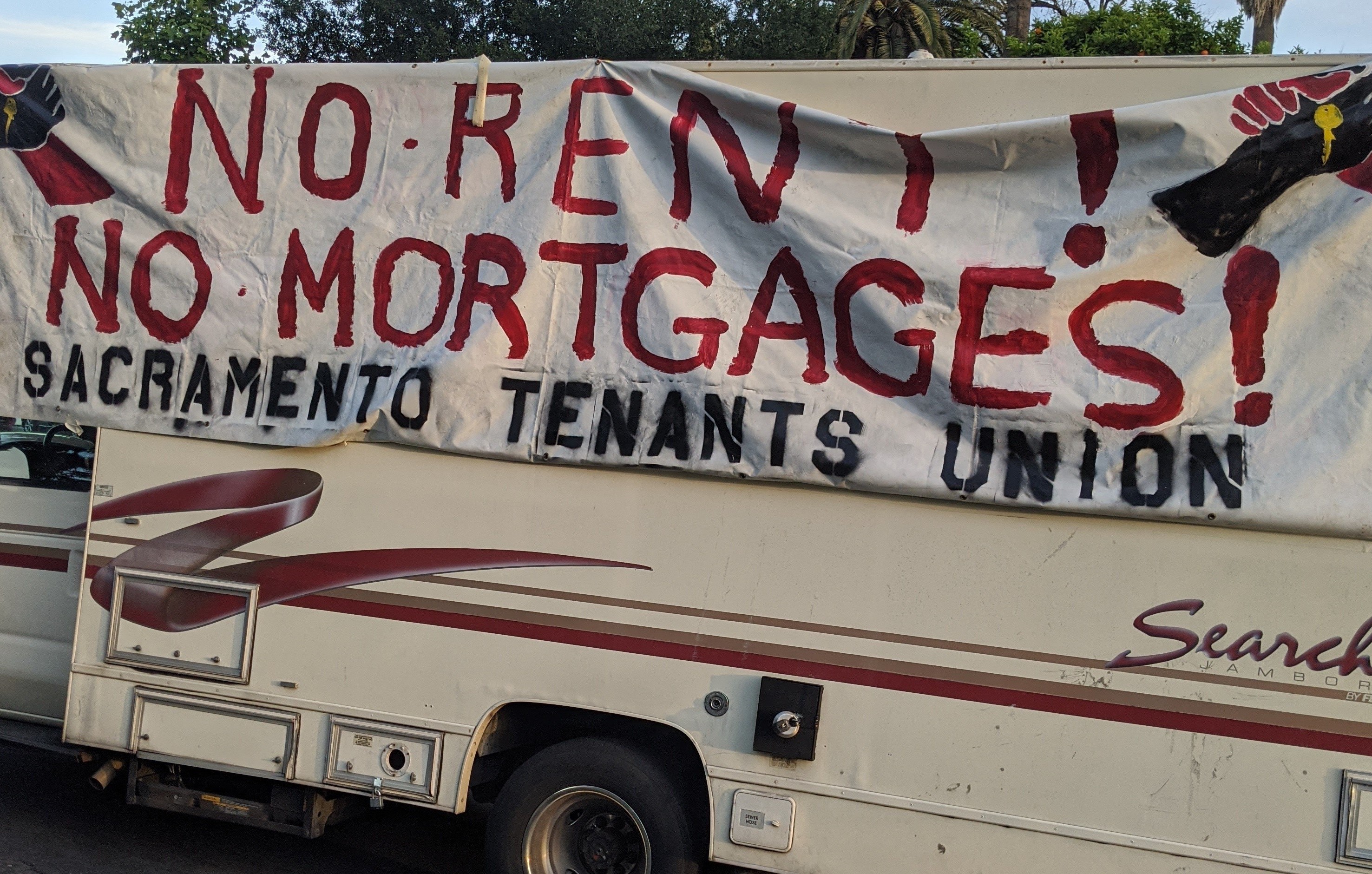 SACRAMENTO – Sacramento City Police vehicles for hours flanked and followed more than 50 cars full of protestors – the COVID-19-safe way to protest for the time being – as they targeted state, federal and local lawmakers, urging them to make changes to help residents not just now during the coronavirus pandemic, but permanently.

The direct action was sponsored by a diverse group, including the Sacramento Tenants Union, the Alliance of Californians for Community Empowerment (ACCE), Sacramento Services Not Sweeps, The Liberation Collective for Black Sacramento, Sacramento for Real Rent Control Coalition, NorCal Resist and Decarcerate Sacramento.

In a prepared statement, the coalition said it was taking demands directly to “various government agencies calling for immediate changes to local, state, and federal responses so that human life

and liberty is prioritized over greed and profit.”

Coalition members – who “toured” city streets, driving past the State Capitol, ICE HQ, City Hall, Board of Supervisors building and County Jail – said they are demanding an immediate cancellation of rent and mortgage payments and any debt resulting from missed rent of mortgage payments during and following the Governor’s State of Emergency.

Specifically, they said they wanted a “halt to all eviction filings during and following the State of Emergency, and immediate housing accommodations for all of California’s unhoused community.”

The coalition complained that although the COVID-19 crisis is disrupting “daily life, putting over 26 million people out of work while rents and other debts continue to mount, the majority of resources mobilized by government leaders have been funneled to multinational corporations and wealthy households already controlling the majority of US wealth.”

The coalition joined others out of work but still waiting for stimulus checks and/or unemployment benefits that have been delayed by an overwhelmed CA Unemployment Office – but more than $850 billion has already been distributed to large corporations and trillions of dollars in stimulus funding to the banks.

“While states like California have taken action to address the economic impacts of stay-at-home orders, many of the most urgent relief measures have failed to reach the most impacted and vulnerable to the virus, particularly low-income workers, the poor and unhoused, Black and indigenous communities of color, the undocumented community, and incarcerated people,” said the coalition.

“COVID-19 has highlighted what we’ve always known to be true: that we are only as safe as our most vulnerable communities,” said Ibraheem Bangura of ACCE. “We demand our public resources go to ensuring public health, which means prioritizing people’s basic needs, including immediate housing.”

Homeless advocates noted that “Despite state officials booking more than 900 hotels and motels across California in March, stringent qualifications have meant that the vast majority of acquired shelters have yet to be filled, including in Sacramento.”

They are also demanding an immediate moratorium on the enforcement of all “quality of life” ordinances that criminalize homelessness, in accordance with Center for Disease Control directives to

“While City and County officials have worked to maintain a deadly status quo, volunteers have worked to build hand-washing stations, feed the hungry, provide services to those being released from jail, and raise money for our hurting families,” said Cathleen Williams of the Sacramento Services Not Sweeps Coalition.

“Our local officials should have these same priorities; instead, they continue sweeps of encampments and seizure of hand-washing stations and other life-saving property. It’s about time they stop criminalizing poverty and use our public dollars to lift people out of this crisis,” she added.

“Time and time again, elected officials in Sacramento County and City, have failed to protect renters by withholding the amendment from voters and failing to pass emergency eviction moratoriums, multiple times, to keep families in their homes,” the coalition said.

They are also demanding an immediate moratorium on the enforcement of all “quality of life” ordinances that criminalize homelessness, in accordance with Center for Disease Control directives to suspend encampment closures, vehicle tows, as well as arrests and citations by local law enforcement.

“We celebrate the fact that our jail population has been reduced by 30%, but it’s not nearly enough to prevent an uncontrollable outbreak in our jails,” said Niki Jones of Decarcerate Sacramento. “We demand the County Board of Supervisors continue down the path of reduction, and cancel their newly announced plan to build a new five-story jail tower downtown. Those funds should be redirected to support reentry services and community-based programs that keep people out of jail.”

The coalition wants the release of all ICE detainees, noting that “horrific conditions and medical neglect prior to COVID-19 were already costing lives at an alarming rate. Action must be taken now to save lives.” The coalition is urging Gavin Newsom to use his authority to release all individuals held in CA by ICE immediately.

“Leaving these communities behind is not an option. ICE must empty their cages and shut down before this virus becomes a death sentence,” said local organizer, Mackenzie Wilson.