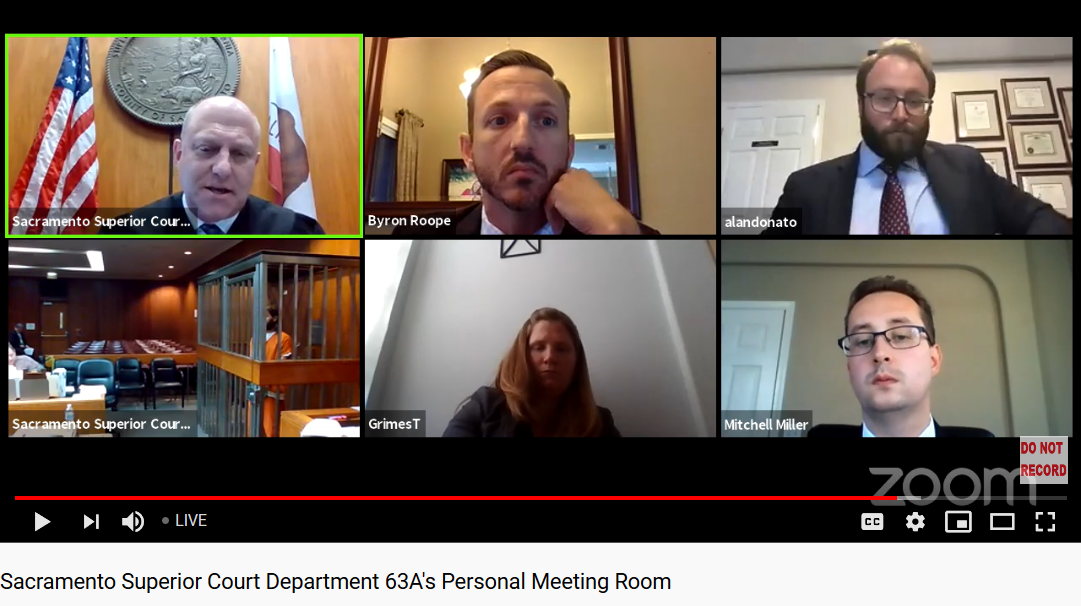 SACRAMENTO – Sacramento County Superior Court ramped-up – some might say that might be too strong a word – its operations Wednesday afternoon for the first time since COVID-19 forced the closure of the courthouse weeks ago.

Using the video streaming service “Zoom,” the courts held afternoon session in four different courtrooms, conducting arraignments only for inmates in custody – the court said those who cleared probation and were released would have their arraignments “later.” The cases heard Wednesday were presumably for in custody types who couldn’t pay bail, or were dangerous enough to have no bail.

Courts technically won’t be open to the public until after April 16 by order of California Supreme Court Chief Justice Tani Cantil-Sakauye. Except now by Zoom.

No one has said what will happen with jury trials, which have been suspended until at least the end of May by the chief justice. Some lawyers are speculating jury trials won’t take place until the late summer at the earliest, considering what they say will be “reluctant” jury pools who may not want to jam into courtrooms with the ever present threat of COVID-19.

Still, Sacramento Superior Court decided to open remotely Wednesday. Next week, in addition to arraignments this week, preliminary trials might be held, according to court officials.

For now, the judge, defendant, defense attorney, prosecutor and the clerk appear together, but not in the flesh. They’re seen, instead, only as a Zoom multi-screen on YouTube. Sometimes, defense lawyers appeared in person, but it was rare.

“As a result of the unsettled nature of the current public health risk from the COVID-19 virus, I have decided to continue the

temporary closure until April 16, 2020. At that time, I will reassess the need to
restrict access to the court and minimize staff levels,” the chief justice wrote.

She added that “I’ve extended the Temporary Court Closure until April 16, 2020, I have also issued successive orders adding to that list of matters. While we have increased some court services incrementally, we remain focused on increasing services for only ‘essential’ matters given the ongoing ‘stay-at-home’ orders issued by the County Public Health Department and the Governor’s Office. Such orders apply for the health and safety of all members of the public, including our court personnel.”

Those concerns took on a more serious tone Wednesday, when the County officials confirmed that one Assistant Public Defender was now in isolation after testing positive for COVID-19.

According to a statement, “It is publicly known that one of our employees tested positive for COVID-19. Upon notification of this diagnosis, the Public Defender immediately notified our people, the County Department of Health Services, and our criminal justice partners. We are in close communications with the Sacramento County Department of Health Services regarding all COVID-19 issues. Everything we do is based on the advice of the Public Health experts.”

But with the announcement that a PD, who had recently visited one-on-one with someone incarcerated, “social distancing” took on a more “real” meaning to the Sacramento courts.

The four courtrooms Zoomed Wednesday all had a little problem getting started, in part because there was some kind of problem putting together a calendar of cases being heard.

Some lawyers had to take extra time to be added to the system, while judges – who appeared to control the audio on the calls – did have a little confusion on how to get lawyers, defendant and the courtroom on the screen at once.

Some charged defendants – expressing a fear for catching the coronavirus inside the tight jail quarters – refused to come into the courtroom, and for those who did, several said that they didn’t feel “safe” in their cells, which because they are double bunked make it impossible to socially distance.

There was also a problem getting prisoners – housed upstairs in the main jail – to the courtroom at times, causing delays. Courtroom deputies explained that “we lost about two-thirds” of the space to transport prisoners because of the social distancing requirements.

But those were short-lived hiccups.

One thing that was noticeable – and it may be a good thing – is how polite everyone was, from judge to defendant to opposing counsel. After all, they could all be seen, although the most people viewing, according to Zoom and YouTube, only reached about 40 or 50.

And, some judges insisted they be the only person on screen, although at the end of the first hour or so, each department screen had all the parties on the screen most of the time. In one case, controls were set to give full screen to the party speaking.

The chief justice already stated that “courts cannot comply with the stringent health directives and restrictions established by the State and continue to operate as they have in the past. Court proceedings require gatherings of court staff, litigants, attorneys, witnesses, and juries, well in excess of the numbers allowed for gathering under current executive and health orders.”

But defense lawyers and civil libertarians have concerns.

“There is a very slippery slope in allowing the state to delay justice. But we must balance the delay of justice with the saving of life. It is rare that I side with the State when it comes to any intrusion or denial of civil liberties, but I believe the motive to save lives is genuine in this case. Now that it’s happening we cannot become complacent and let them go wild. The change must be proportional to the situation and that situation is still developing. We don’t know where that line is yet,” said Danny Garza, a National Lawyers Guild/Sacramento board member.

Garza added: “The courts attempting to use internet conferencing software to hold trials is going to be a challenge, and those trials conducted in this manner open the door for numerous appeals. There will likely be issues with controlling the integrity of the court. “How will the judge know if there is someone else in the room of a witness feeding them answers? What if a juror is actually watching that tiger documentary instead of watching the trial? How are witnesses supposed to authenticate evidence? What if a bad internet connection prevents the court reporter from hearing and recording testimony? How will the jury watch the trial and who chooses what they see at any one time without inviting bias?”

Civil rights lawyer Keith J. Staten said, “The order by the Chief Justice stands to violate rights Guaranteed by the sixth amendment of the constitution in regard to a speedy preliminary hearing for felony offenses and trial. It also expands the time to be brought to court for arraignment from two to seven days. The state of our pandemic and the need to take action to save lives seems to be a justification to delay justice.

“Here, it appears that the power to disrupt the rights of defendants was not addressed by the legislative branch which could have changed laws. Challenges will be made, but perhaps not in time to be made moot by occurrences we have yet to see from the pandemic. It may give rise to better settlement offers with better results. It may and will open up release by lowered bail or no bail to everyone except presumptive no bail cases,” Staten said.

But in any case, Staten reminded other defense lawyers, “Certainly each counsel must now look to use the situation to get the best and proper outcome for their clients. Even if the pandemic may isolate us, it does not release us of our duty to serve our clients and justice.”

“Justice delayed is justice denied. What’s happening with the delays is understandable, but this can be devastating. What if we get to a trial that 45 people don’t want to do. This system might break down. This pandemic is exposing so many cracks in our system,” confided one attorney.