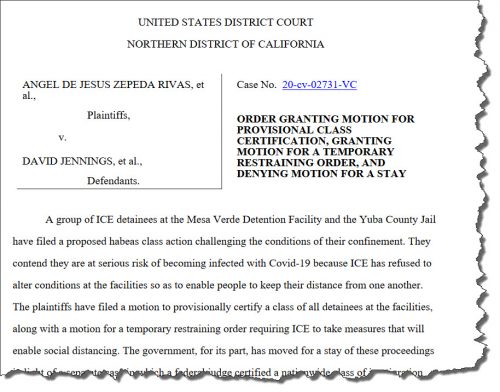 SAN FRANCISCO — A U.S. District judge here Wednesday – rejecting the government’s argument for a delay – granted an emergency order for a temporary restraining order to require ICE to identify people for release from U.S. Immigration and Customs Enforcement (ICE) detention facilities in California, because of the threat of infection from COVID-19.

There are about 400 people being held in immigrant detention at Yuba County Jail in Marysville and Mesa Verde Detention Facility in Bakersfield.

And after 14 days, the court said, it will hold a preliminary hearing to decide what measures “ICE must take to ensure social distancing and other protections for the people who remain detained at the facilities…Because time is of the essence,” acknowledging the “public health threat currently posed by crowded detainee populations and ICE’s failure to respond.”

In the meantime, Judge Vince Chhabria ordered a review of all those incarcerated to identify people for release in order to enable social distancing inside the centers, noting “The plaintiffs have demonstrated an exceedingly strong likelihood that they will prevail on their claim that current conditions at the facilities violate class members’ due process rights by unreasonably exposing them

to a significant risk of harm.”

The judge ordered ICE to provide names, ages, health vulnerabilities and any criminal information for each of the 400 some odd detainees, suggesting that the court may “implement a system for considering individual bail applications” even before the preliminary injunction hearing in 14 days.

The federal judge was extremely critical of ICE’s handling of the matter.

“(G)iven ICE’s failure thus far to respond meaningfully to the crisis despite the wave of court rulings from around the country documenting the agency’s inaction, given that ICE does not even currently possess a list of detainees with health vulnerabilities, and given the lack of specificity in ICE’s alternative remedy proposal,” anything less than his order Wednesday would create delay rather than meaningful improvements in the conditions of confinement at the facilities,” Chhabria said.

“The fact that ICE does not have such a list at the ready, six weeks after Governor Newsom shut down the entire state and one week after this lawsuit was filed, speaks volumes about where the safety of the people at these facilities falls on ICE’s list of priorities,” he added.

Th federal judge commented that “plaintiffs have demonstrated a strong likelihood of irreparable harm to the class,” mocking ICE’s claim it had not discovered at COVID-19 cases, noting “this is not especially comforting given that only two detainees have been tested.”

The court also pointed out that over the last few months “dozens of offenders sentenced for street-level drug crimes and transported on detainers from the Santa Rita Jail (where there has been COVID-19 cases) in Alameda County to these ICE facilities. The conditions of confinement do not merely threaten detainees; they also threaten facility staff, not to mention the greater community whose health is put at risk by the congregation of large groups in cramped spaces.”

Plaintiffs’ counsel has repeatedly argued that immigrants at both of these facilities sleep in packed dormitory rooms on bunk beds bolted to the floor only a few feet from each other. They use shared bathrooms, shoulder to shoulder with someone at the next sink and arm’s length from the next stall. They line up to get meals in crowded cafeterias, and are not provided resources for

People detained at Mesa Verde held a recent hunger strike challenging their continued detention in unsafe conditions amid this pandemic. Yuba County detainees have held several hunger strikes over the last year or so because of “inhumane” conditions there.

Chhabria opined in his ruling that “At root, this lawsuit is not about whether any particular person should be released; it is about the conditions of confinement at the facilities. The primary question is whether the people detained at those facilities are being exposed to an unreasonable risk of infection in violation of the Due Process Clause.”

The judge said he agreed with the plaintiffs, who argued in their pleading that “class members have suffered the same injury—the substantial risk of contracting COVID-19 due to the lack of social distancing—and all class members would benefit from the same remedy—an order requiring social distancing at Yuba and Mesa Verde.”

“The likelihood,” added the federal judge, “that some people would need to be released as part of the effort to alleviate dangerous conditions at the jail (presumably by prioritizing people who have health vulnerabilities and whose records indicate they are not a danger to the community) does not change the ultimate relief the plaintiffs seek.”

This is, plaintiffs’ counsel said, the first class action in California challenging conditions of detention filed on behalf of everyone detained at these two facilities.

“My worst fear about staying in detention during COVID-19 is dying among strangers,” said Lawrence Mwuara, a 27-year-old citizen of Kenya in his court declaration. He is detained at Yuba County Jail despite medical conditions which make him vulnerable to severe COVID-19.

He added, “I imagine Yuba officials having to contact my family because I have died from COVID-19. Being unable to protect myself from infection here, especially because of my medical conditions, makes me feel like nothing—like dirt.”