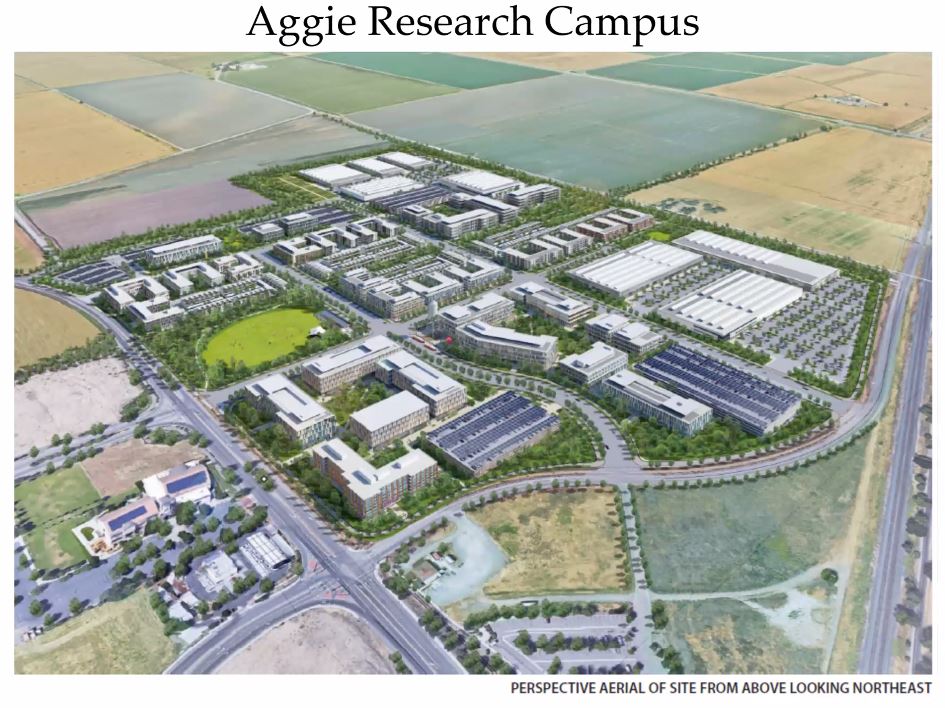 ARC 2050: Propaganda or Vision?   This is a picture of what the developer says a tree-filled Aggie Research Campus will look like in 2050.  If history holds, it is just propaganda, just as are most architectural drawings are, which wildly over promise tree shade.

Will Dan Ramos’ ARC project break the mold and be the truly “green development” picture here, or will it be as some claim: 40 acres of barren sunbaked parking surrounding an island of buildings and 4 and 6 story apartment buildings?

Success is not just up to the developer, but city planners, who need to admit it is their existing methods of follow-on tree care that have failed,  and then explore new regulatory/maintenance methods.   In this, they have to remember these follow-on tree care rules are not for developers like Dan Ramos — people who promise good intentions and claim to love trees —  but rather some future out-of-town landlord who will be tasked with managing the project with the goal of reducing costs and improving cash flow.

The tree planting plan for the Aggie Research Campus was presented to the Tree Commission Thursday Night.

It is beyond what any other commercial development has proposed.

If followed through and done correctly this development, even the parking lots will be shaded urban forest.

BUT  the devil is in the details of implementation.

In Davis and most cities, there is a constant failure to successfully implement tree plans like these.  The pretty pictures of tree-shaded development shown to commissions, councils, and community as part of the approval process are rarely ever fulfilled.

Let me repeat that:  There is an unbroken pattern of failure by landlords and cities to maintain trees over the years.

The promises made initially, fail due to the self-regulation assumption that is built into city regulation.  Landlords, who take over from developers, almost always cut costs, since it is easy to ignore tree care as investors are focused on next quarter’s bottom line, rather than whether the trees are going to thrive over a five- or ten-year period.   And if you are an out-of-town owner, you only care about cash flow, not aesthetics.

Further, the city urban forest department does not have time or tools to enforce promises made by the developer on the subsequent landlords.  And policymakers have failed to incorporate enforcement mechanisms and substantial fines, even when tree abuse can be identified and prosecuted.  Fees are so low landlords look at them as just the “cost of doing business.”

The pattern of removal of large healthy street trees by three separate Davis gas station owners testify to this.

This is not the way it needs to be.

This is fixable if City Management is willing to ask developers, like Dan Ramos, to agree that subsequent landlords will follow a robust tree-care monitoring program to guide their landscape crews.

And the city should include in its base line conditions and the development agreement they and all subsequent property owners who do not follow the plan will be subject to significant, and repeating, annually escalating fines until the problems are addressed.  Fines need to far exceed the cost of tree care neglected by multiples of 5 or 10, so the fines are not written off as just the “cost of doing business.”

These are the four points that need to be nailed down before the citizens are asked to approve the ARC project via a Measure J/R vote, if we believe the pretty pictures being shown are more than propaganda.

These four points in the private/public partnership need to be memorialized in the Development Agreement in order to assure trees are fully a part of the ARC.

Planting and growing trees is easy. What’s tough is the follow-through year after year of a number of minor tasks needed for them to thrive and become a thing of beauty and utility.  Residents and workers don’t have to settle for acres of gnarled stunted and nearly dead trees that define our city’s parking lots and commercial developments.

So, the real work of sustainability is not in specifying whether trees species are native or drought-tolerant, but setting up a workable system of inspection, monitoring, and enforcement so the trees are cared for over the long haul. The City needs to be willing to do something different, and Ramco needs to partner with the Urban Forestry department by acknowledging commercial property managers don’t care about the trees unless their incentives are built into regulations upfront.

Self-regulation of Tree Care does not work with commercial developments. 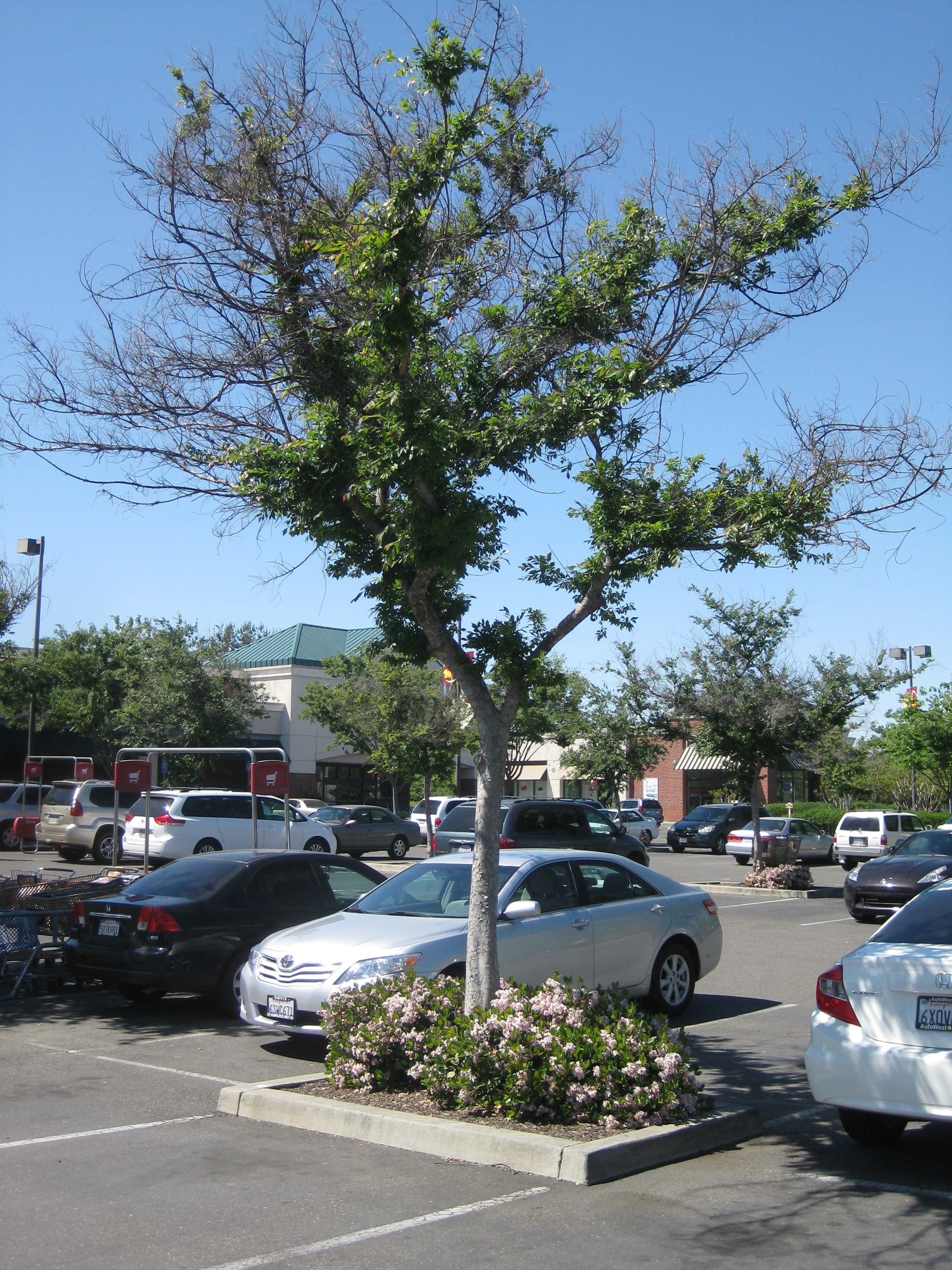 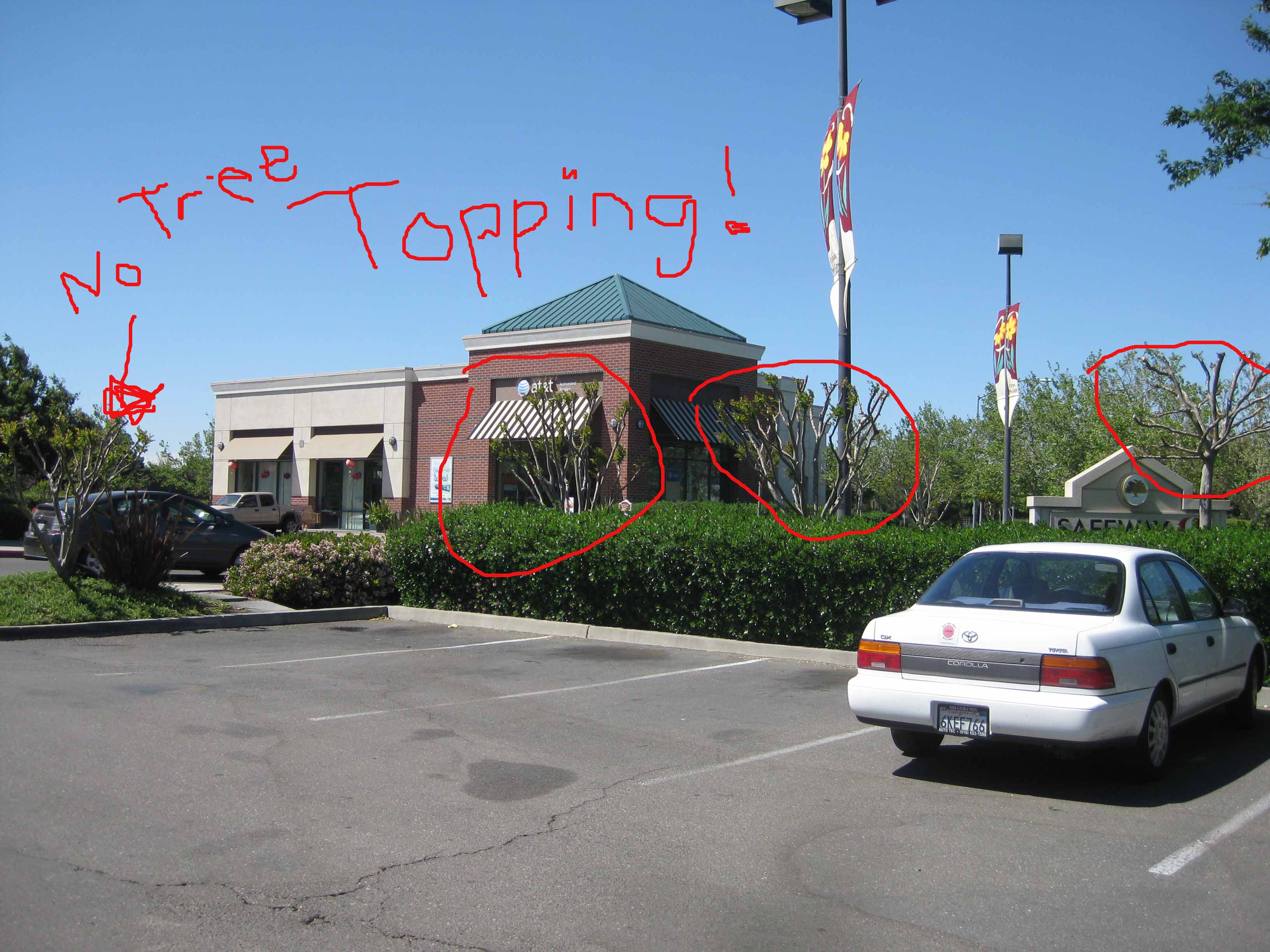 Promises Made, Promises Broken.   These are a few of the embarrassing oaks and other trees in the so-called “Oak Shade Mall” at Pole Line x Cowell. The developer promised this mall’s tree plan would accomplish 50% shade in the parking lot area after 15 years.  It’s now 25 years, the mall has changed hands and the new property manager seems to have forgotten this legal promise. But its non-enforceable tree promises, just like a those made  other commercial development around town.  The trees at Anderson Plaza (Anderson x West Covell), Market Place mall (W. Covell x Sycamore), Dollar Tree Mall (8th Street) Nugget mall (E. Covell x Pole Line) all are experiencing varying levels of neglect and city staff has no time or mechanism to enforce promises made as part of the entitlement process.  Self-regulation of Tree Care by commercial landlords does not work.  To add to the current problem the lack of transparency: The City cannot technically release to the public what was agreed to in the “landscape plans” due to copyright. means tree-activists, even city Tree Commissioners, are blocked from getting hard copies to comparing “trees promised” with “trees actual”.  The city should be requiring a release so these documents can be made public as part of the entitlement process.

Will Aggie Research Campus repeat this, or will the city change its method of regulation to assure promises made trees are actually kept?

12 thoughts on “Guest Commentary: Will ARC Be an Urban Forest Breakthrough or Another Proven Self-Regulatory Failure?”