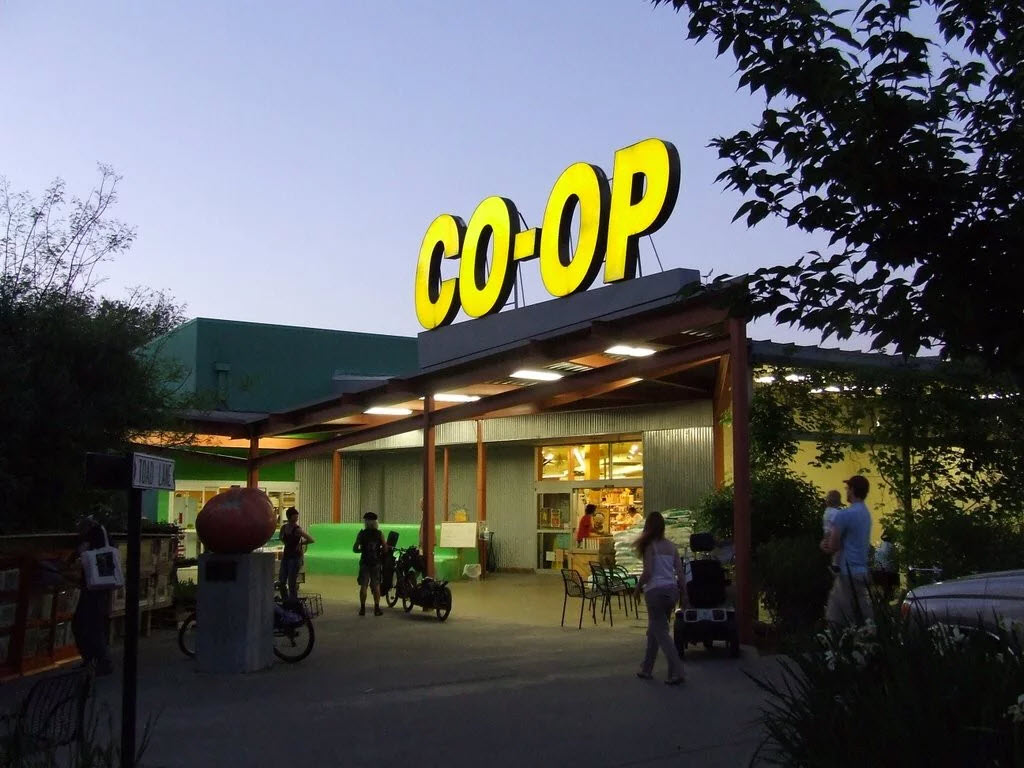 If you are a Davis Food COOP shopper and agree with me that the Davis Food COOP should immediately implement a policy to require both customers and employees to wear face coverings inside the store, please contact the General Manager and the Board.  Wherever you shop for groceries in Davis, please demand the same of your store, and please do so today. --acm

[An open letter to the Davis Food COOP]

On the evening of Tuesday, April 7th, I went to the COOP to shop for groceries.  This was fully four days after the White House had recommended that the public wear face-coverings (FC) in enclosed public spaces to prevent the spread of droplets that could contain the Coronavirus (CV) — this was almost immediately adopted as recommended at the State and County levels as well.

I was shocked that about 60% of the customers in the store wore no FCs, and I also counted three employees, one stocking produce, wearing no FC.  I had assumed that the COOP and all grocery stores would mandate FCs for anyone inside the store.  I was incensed, and glared hate at the selfish shoppers from behind my FC.  The only advantage I could see in having some shoppers not wearing FCs was that these same people were for the most part were not observing social distancing either, so the selfish, sociopathic and uncaring could be easily spotted and given a very wide berth.

I talked to the floor manager on duty, and asked why FCs were not required for customers, and shockingly not for employees stocking produce.  He said he wasn’t sure, but possibly they were concerned about losing market share if they didn’t allow people in without FCs.  To his credit, he was wearing a very impressive mask.

I didn’t want to return to the COOP and vowed to do something about this, but figured the COOP must just be slow to implement the policy.  Then on Friday, April 10th, a week after the Whitehouse recommendation, I read in the Davis Enterprise a letter from an appreciative Nugget customer:

Kudos to Nugget Market for helping to keep our community safer than the rest. Requiring their staff as well as their customers to wear face masks or coverings in this challenging time is brave and the

absolute right thing to do.

OK, the cool stores in town are adapting; “I’m sure the COOP has the same policy now”, I thought.  On the evening of Saturday April 11th, I went to the COOP and checked the front door before going in.  No sign about FCs.  I stood back away from the doors and watched people going into the store for a couple of minutes.  Not one of the people I saw going in, all in their 20’s, 30’s, and 40’s, were wearing any FCs whatsoever.  Then, as if on cue, a elderly couple probably in their 80’s, slowly made their way out of the COOP, pushing a shopping cart.

NO!!!  People, that’s not how it works!  The masks don’t protect the old people from the virus, the young and healthy all wearing masks is what protects the old people and those at risk.  If there ever was a place that I’d expect the phrase “We’re All in this Together” to apply, it’s at the Davis Food COOPERATIVE.  Instead, the descriptive phrase of our customers (us) appears be, “We don’t give an [expletive deleted] about old and sick people, they can die for all we care”.

But who is most at risk of contracting the virus in the store setting?  The front-line staff employees who are out on the floor all day long; do you, as managers not care about your staff’s well being?  Just because they are mostly relatively young does not mean that none of them have CV-susceptible health issues.  The primary transmission method for CV is thought to be from exhaled breath droplets containing the viurs. FCs are believed to reduce this transmission, so that if ONE asymptomatic person comes into the store, there is a reduced chance THEY will transmit it to someone else.  COOP staff on the floor are exposed to hundreds of rando people each day. A mandatory FC policy for customers protects COOP staff.

Grocery workers everywhere are in a perilous position:

Another source reported that 41 grocery employees have died nationwide from CV.  A mandatory FC policy for customers helps to protect our COOP floor workers.

On Monday, Sonoma County announced a countywide policy of mandatory FCs for all persons in enclosed public spaces.  Does the COOP really have to be so far behind the policy curve and wait one more day?  How many times have we heard, ‘if only we had done X two weeks earlier, how many lives would have been saved?’.

And if a COOP worker does get CV, every other worker exposed to that worker will have to go into two-week quarantine.  Word will get out to the media and people will avoid the COOP.  The store may have to shut down for a time for sterilization, fresh product will be thrown out, and remaining staff will be stressed, stretched-thin and scared.  Safeway can survive if that happens to one of their stores – can the COOP?

The time to require FCs at the COOP is now.  What if one of those maskless people I saw going into the store last Tuesday infected a maskless store employee in produce who is now asymptomatic?  And what if that employee got slightly too close to those two elderly people I saw coming out of the store on Saturday, and they die next week at Sutter hospital after painful intubation.  Wouldn’t you have wished the COOP had initiated a mandotory FC policy a week earlier?  The best time to plant a tree was 30 years ago, the second best time is today.

Those two elderly people were wearing FCs and that helped protect us; why were we all not wearing FCs to protect them?  Hyperbolic? – perhaps, but perhaps not:  this policy is life and death, not something we often deal with as a COOP.  Any single transmission may become someone’s fatality, and any reasonable action by the COOP to reduce the chance of a contact should be implemented.

Alan C. Miller is a 40-year resident of Davis and a 35-year fully-invested member of the Davis Food COOP.

Share:
Tags:CoronavirusDavis Food Co-op
Previous : Governor Lays Out Six Indicators That They Will Consider for Re-Opening Economy
Next : COVID-19 UPDATE: From the April 14 Board of Supes Meeting

5 thoughts on “Letter: The Davis Food COOP Should Immediately Require Both Customers and Employees to Wear Face Coverings”