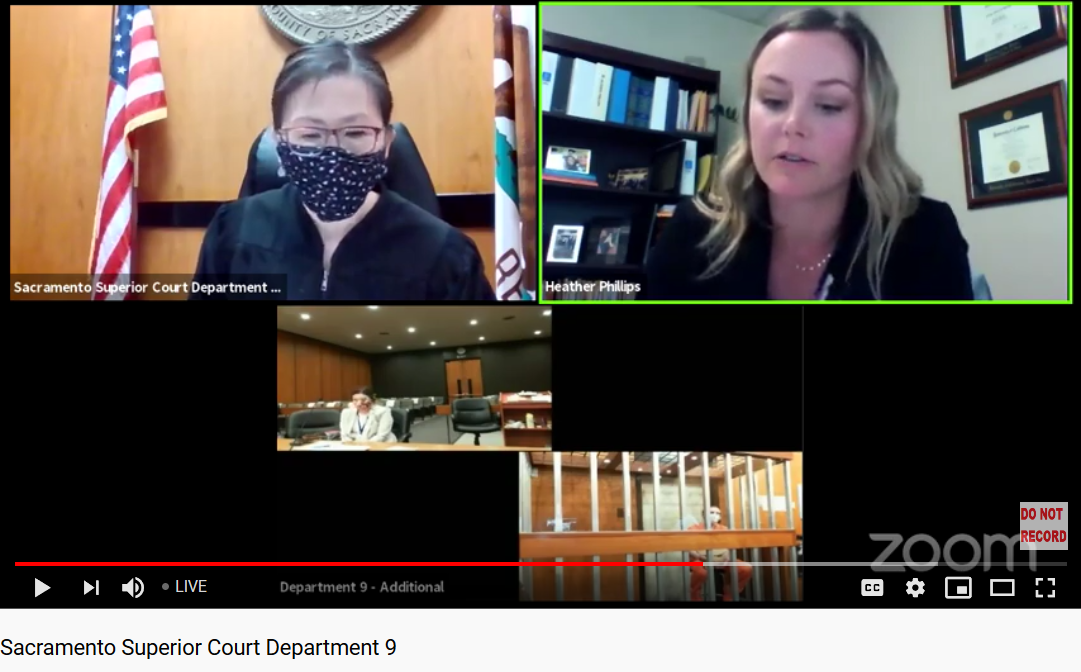 SACRAMENTO – After months of COVID-19 mandated empty courtrooms, trials may begin sometime around the middle of June, according to information informally – and maybe accidentally – discussed on a live stream give-and-take between a Sacramento County Superior Court judge and lawyers Wednesday.

How and exactly when – the “how” is the big question – is still unknown, but Sacramento Superior Court is apparently working on it.

In one set in Dept. 1 Wednesday, the non-jury trial was false-started when the judge was informed, apparently, that “sexual content involving minors” was not going to be allowed on the Zoom/YouTube platform.

“These issues need to be resolved to make this trial open to the public. Today was an attempt to accomplish a trial sooner, but we are unable to use the technology. We’ll continue this for two weeks to ensure an open and public trial,” said Superior Court Judge Curtis Fiorini.

Defendant Stanley Mundy is facing 15 sex-related counts, including multiple charges of rape, and five counts of lewd acts with minors under 14. His trial was three days old back in March before it was shut down when COVID-19 struck and the courts were closed. He’s been in custody for about three years.

But the discussion inside the courtroom – with masked defense counsel, prosecutor, and defendant – was revealing.

The judge acknowledged that the “plan” an attorney said he had heard was that jury trials will start June 15 or June 16, and that with a huge number of backlogged trials – three months’ worth –

large courtrooms will be at a premium to accommodate “social distancing” of jurors for jury selection, among other anticipated hurdles.

The State Judicial Council has delayed live jury trials since the state stay-at-home order in mid-March, but that 90-day waiver is about to expire in mid-June, creating “land rush” type scurrying to get trials going for defendants, whose rights to a speedy trial have been suspended.

That was just the issue Tuesday when the Sacramento County Public Defender’s Office filed a motion to dismiss driving under the influence charges against Adam Medina, arguing his right to a speedy trial has been violated.

“This weekend people were at outdoor patios and bars. They’re OK to be out and it’s not OK for the defendant to have a speedy trial?” asked Sacramento County Assistant Public Defender Addie Young.

She described a “new normal” court scenario with “with temperature checks, jurors spaced six feet apart, with marks. We’d have to be careful, but this is a DUI, not a homicide,” with the only witnesses being a CHP officer and the defendant “and maybe a doctor.” She noted that plexiglass could surround “your honor” and also protect jurors and witnesses.

In her motion to dismiss, Young noted, “To the extent the orders are grounded in ‘good cause,’ they are insufficient to pass constitutional scrutiny absent individualized review of an accused’s case. Even in a crisis, the court cannot abandon the principles of the government’s tripartite constitution and the rights guaranteed to the people.”

In short, the motion argues that, while the government can act in an emergency, it overstepped its bound here.

“While COVID-19 presents exceptional, emergency circumstances, the state must still demonstrate individualized good cause. Certainly, some jury trials may not and should not occur during the pandemic. However, some cases may be held and tried safely. The state must demonstrate why an individual case cannot proceed. To the extent the orders issued by the Judicial Council and the Presiding Judge can be interpreted to be good cause for delay, they are insufficient without an individualized finding,” said the PD Office pleading.

APD Young also noted that Medina’s case was supposed to go to mandatory settlement around June 15, but the court changed it, wrongly, because he was not consulted about the date change.

The Sacramento District Attorney’s Office disagreed with all of it.

“When the current restrictions and limitations are lifted and the courts begin to reopen, any delays in getting the backlog of cases to trial caused by court congestion are not a violation of a defendant’s right to a speedy trial as they are the result of the unforeseen and exceptional circumstances caused by the COVID-19 crisis,” the pleading continued.

Acknowledging the need to social distance and quoting the county health officer’s appeal to stay at home to prevent spread of the virus, the judge admitted, “Courts cannot comply with the ‘tailored set of restrictions’ established by the Sacramento County Public Health Officer and continue to operate as they have in the past. Holding jury trials requires the gathering of court staff, litigants, attorneys, witnesses, and juries, well in excess of the numbers allowed for gathering under the current set of restrictions.”

She added that, although “Sacramento County has met the Governor’s criteria and is gradually moving into Stage 2 of California’s Reopening Road Map….Sacramento still bans large gatherings and requires six-feet social distancing at all times. Accordingly, the Court is not immediately able to conduct jury trials in compliance with the new Public Health Order and in a manner that would ensure all participants’ safety.”