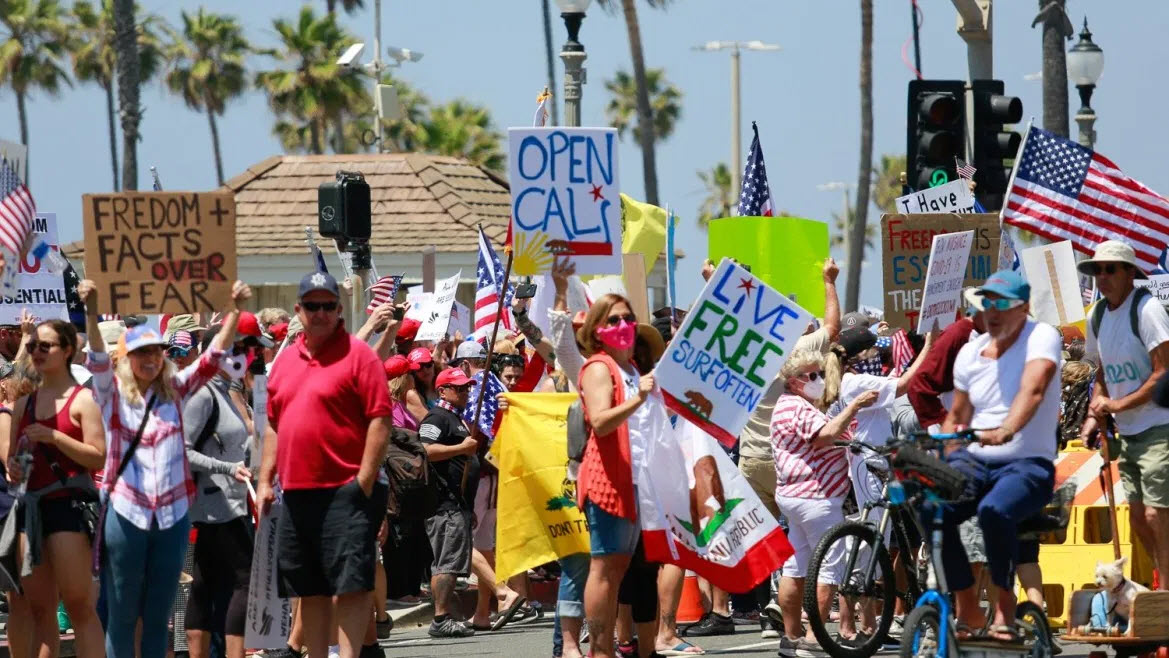 The Trump administration cheered on Monday as a slew of states like Texas, Indiana, Colorado and Florida have pushed forward with easing stay-at-home and even social distancing guidelines.

Just last month, the White House released recommendations “to wait to see a decline in cases over a two-week period” in addition to more robust testing in place for front-line workers before heading into re-opening.

This comes even as experts and indeed the administration itself was projecting a resumption in the rise in both infections and deaths over the next several weeks, with the expectation that by June 1, the number of daily deaths would reach 3000—nearly double the current level.

Reported the NY Times: “The more dire assessments reflect the decisions of governors across the country to ease social-distancing measures even as the number of new cases holds steady and, in some cases, is even rising.”

The Institute for Health Metrics and Evaluation at the University of Washington has increased its projections from 60,000 total deaths to 134,000 total deaths—a figure that partly reflects “changes in

Reports the NY Times: “While the United States has been hunkered down for the past seven weeks, the prognosis has not markedly improved.”

This, the Washington Post says, “underscores how an eagerness by Trump and several state governors to begin restarting normal activities after a weeks-long economic slowdown has clashed with a stubbornly high national caseload that has defied the president’s predictions of a swift and safe reopening.”

The president has been overly optimistic on this from the start.  He said over the weekend, “There’s not too many states that I know of that are going up. Almost everybody is headed in the right direction…  We’re on the right side of it, but we want to keep it that way, but we also want to get back to work.”

But even a partial re-opening may not do much to help the economy.  The Penn Wharton Budget Model for example found the best case scenario in terms of loss of life was not re-opening until June 30.

In that scenario, deaths would nearly double to about 117,000—right around where the estimates had them a month ago.

The bad news in that scenario is US GDP would plummet.  By the end of June another 18 million jobs would be lost and the GDP would fall to 11.6 million.  Already, since mid-March, nearly 30 million Americans have filed for unemployment.

Reopen the economy now—that would be the best case scenario for the economy.  About a half million additional jobs would be lost by June 30 and the economy would be down 10 percent.

The bad news in that is there would be 233,000 ADDITIONAL deaths by the end of June (that means deaths over and above the most restrictive scenario).  That doesn’t even speak to the rest of the year.

But there is a softer middle ground—residents practice social distancing, states partially reopen but maintain some restrictions, like the prohibition of in-house dining at bars and restaurants.  Under

that scenario it would save about 4.4 million jobs but still lose 14 million between May and June 30.

Meanwhile, as places like Sutter and Yuba County rush to re-open against medical advice, most Americans remain opposed to the reopening of restaurants, retail stores and other businesses.

Despite the mixed messages by the president, a Washington Post-University of Maryland Poll found sizable opposition to re-opening.

Of the eight categories, only the opening of golf courses had 40 percent support—59 percent opposed.

Retail stores were 34 percent, barber and hair salons 31 percent, it then dipped into the 20s for nail salons (25 percent), dine-in restaurants (26) and gun stores (29).  At the bottom was movie theaters at 18 percent.

The number of people worried about becoming infected and seriously ill jumped from 57 percent two weeks ago to 63 percent now.

President Trump’s approval remained steady at 44 percent with 56 percent negative.  That compared to 75 percent approval in the polls for respondents’ state governors.

On the other hand, Americans continue to overwhelming approve of the way federal public health scientists, including Anthony S. Fauci, have dealt with the challenges from the coronavirus.  Dr. Fauci not only continues to have strong positives, but he maintains bipartisan support with two-thirds approval from Republicans and 90 percent approval from Democrats.  Public health scientists also have a strong 71 percent positive rating.

As we have seen large protests, it is important therefore to recognize that not only are these people in the small minority of citizens, they seem to be extremists—either on the far right or in some cases, far left, anti-vaxxers.

The New York Times noted that anti-vaccination activists are a growing force in these protests.

They write, “But the organizers were not militia members, restaurant owners or prominent conservative operatives. They were some of the loudest antivaccination activists in the country.”

The Times adds that “their growing presence at the protests worries public health experts who fear that their messaging could harm the United States’ ability to turn a corner following the pandemic if Americans do not accept a future vaccine.”

A vaccine is likely the best hope for the country to return to a semblance of normal.  More likely, as states re-open and their infections and deaths rise, there will be a second wave of closures.

127 thoughts on “Commentary: Public Against Re-Opening So Soon”