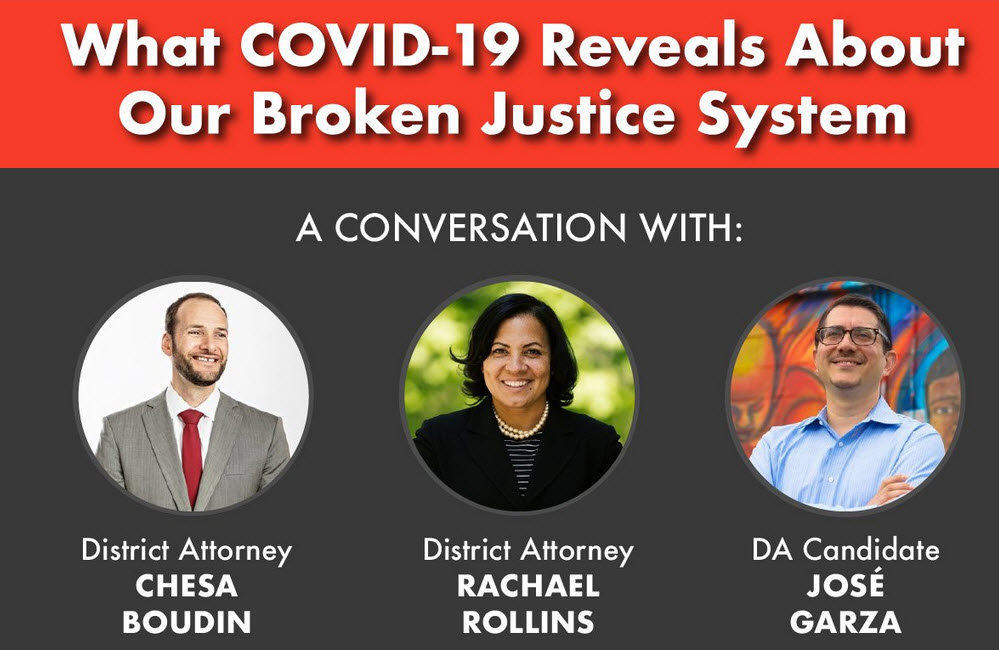 Since the onset of the COVID-19 pandemic, criminal justice reformers have been hustling to get people out of jails and prisons.  On Monday, Real Justice held a discussion with DA’s Chesa Boudin (San Francisco) and Rachael Rollins (Suffolk County, MA) and DA Candidate from Travis County Texas, Jose Garza on what COVID-19 reveals about the broken criminal justice system.

Jose Garza running for DA in Travis County who started his career as a public defender along the Texas border.

“I saw on every single day, the way our criminal justice system weighs most heavily on working class people and on people of color,” he said.

“This conversation.. in many ways isn’t new,”  he said noting that for years reformers have been trying to bring attention to our broken system and our broken sentencing policies.

Chesa Boudin, San Francisco’s District Attorney, “What we did in San Francisco to reduce our jail population was really in some ways very simple – we listened to our public health officials.”

Their public health officer said they had to get their jail population down to a population of about 700 people.

“That was a huge reduction from where it was when I took office,” he said when it was in the 1200s.  “By following their lead we’ve been able to avoid a significant outbreaks in our jails.”

He noted that in a number of places there have been significant outbreaks.  He noted huge outbreaks in places like Los Angeles, Rikers Island and Ohio.

“In San Francisco, just two cases and no deaths,” he said.  “The reason for that is because we worked early and hard to follow public health experts advice.”

Low and no risk, get them out of jail, he said and expediting those who would be released anyway.

DA Rachael Rollins is the DA in Suffolk County, Massachusetts has served since 2019.  She noted that like Chesa, she too has relatives incarcerated.

She said you can love someone and not agree with the choices that they made.  She added, “Sometimes they aren’t choices, they are circumstances that people find themselves in where there is no other alternative than what they choose or believe they have to choose to do.”

“People are not just the one worst moment in their life before one decision,” she said.  She said that we need to treat people as human beings irrespective of what they have been alleged to have done.

Rachael Rollins said that in order to flatten the curve, in order to beat COVID-19, we need to do the two things that public health officials recommend, social distancing, not being in groups of ten, and extreme hygiene – “the

worst place you can be in the world is in a jail or a prison, where overwhelmingly individuals have a six by eight cell, an open toilet with no seat covering” – “This is an awful situation pre-COVID-19 adding that it is intolerable.”

She said joined the public defenders in a lawsuit to end those conditions.

Jose Garza said, “In the last couple of weeks (in Texas) COVID-19 cases in jails and prisons have skyrocketed.  Prisoners are dying.  Employees are dying.  The virus is moving back and forth between the jails and into communities.”

He said in Texas over 1300 incarcerated individuals and over 500 employees have been infected.  23 have died as the result of this virus.

“They have died needlessly because there are clear steps that our health officials say we should be taking,” he said.  “The majority of the people in our jail are there because they can’t afford to pay bail.”

Bail is a big issue here – it was big before, but COVID has made it loom larger.

Chesa Boudin said as a public defender, “I saw day in and day out where people had a price tag put on their freedom.  People who were poor and innocent or poor and presented no public safety risk but were detained because of their poverty.”

But wealthy people accused of very serious crimes were able to buy their freedom.

“Money bail is a system that privileges the wealthy and the powerful over the poor and the innocent,” he said.  “We have to change that system.”

She said, “If I have to hold you, I want it to be because you’re dangerous not because you’re poor.”  She added, “It’s penalizing poverty is basically what the bail system is.”  And overwhelmingly these are black and brown people.  “We are the only people in the world that get blamed for being murdered.”

It is not just the unfairness of the bail system, it is also the prosecution and incarceration of people who are not inherently dangerous or for low level crimes.

Jose Garza called for “us to end the prosecution of these low level drug offenses.”  He added, “You’re starting to see those changes happening around the country.”

The data is very clear, he argued, that every day someone who has a substance abuse problem stays in jail, “the likelihood that they will commit another crime goes up.”

“Continuing to prosecute these cases… makes us less safe,” he said.  And these are one of the biggest drivers of racial disaprities in our system.

Rachael Rollins pointed out that the way the media feeds us information, when you talk about predators and rapists and what they look like, “Implicit bias is in all of us.”

“We are vilified and criminalized and a lot of that is fed to us through the media what we see,” she said.

Pointing to the Georgia killing, she said, “What I’m tired of is black people are the only people in the world that get blamed for being murdered.”

She pointed to the video out of New York of the man who was beaten because he wasn’t social distancing.  “The same day the NYPD was handing out masks to white people sunbathing.”

Chesa Boudin pointed to a shooting recently in San Francisco where a young man with no criminal history was shot and the police put him in handcuffs.

He talked about drug court and talked to one person who said, “In San Francisco, it is easier to get high than it is to get help.”  Chesa Boudin said. “It is unacceptable, it is disgraceful and it says something really sad about the state of affairs of our system when drug treatment centers are only available Monday through Friday, 9 to 5, but our county jails are open 24/7/365.  We can do better.”

Chesa Boudin reflecting on what they did right in their jails again said, “We have taken steps to prevent (its spread) and thus far it has been successful.  The number one thing we did and I wish the President of the United States would have done this from the beginning, we have listened to and followed the advice of public health officials.”

He said they recognize the potential for COVID-19 in our jails and prisons to “create an epidemic within the pandemic.”

Boudin also pointed out, “There’s people who shouldn’t have be in there in the first place.”  He told the story of a young woman with no criminal record whatsoever, convicted of a misdemeanor and serving time in county jail with a high risk pregnancy.  “Now what are we doing – how do we say to ourself that this is in the public interest?  It makes no sense.”

11 thoughts on “COVID and Our Broken Justice System”