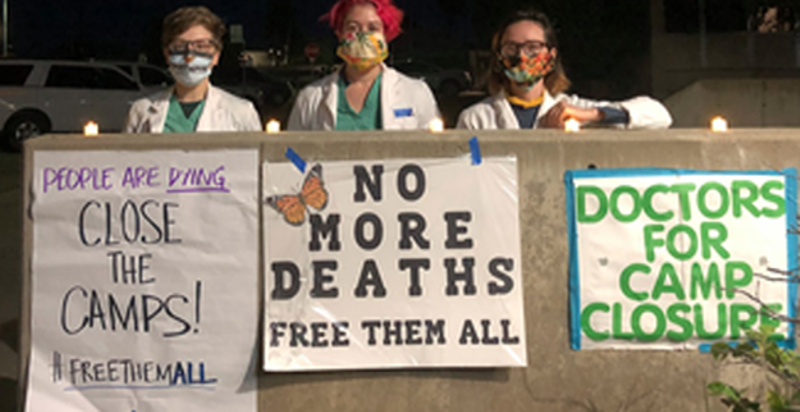 MARYSVILLE – In the few weeks since a U.S. District Judge granted an emergency order to require U.S. Immigration and Customs Enforcement (ICE) to consider releasing detainees from California’s two ICE holding facilities because “irreparable harm” may come to detainees from COVID-19, things have become worse. Much worse.

At Yuba County Jail, which holds about 100 ICE detainees, a week-long hunger strike by 20-year-old El Salvador asylum seeker Juan Jose Erazo Herrera ended Sunday after public officials reportedly started to look into the conditions and threat of COVID-19 at the Yuba Jail.

It was the youth’s third hunger strike – he participated in two others at the facility earlier over conditions.

But the news was much worse at Mesa Verde Detention Facility in Bakersfield, where it was reported Tuesday that Choung Won Ahn, 74, died by suicide – the third death to occur in ICE custody this month.

Mesa Verde, along with Yuba Jail where hunger strikes for better conditions are common, were targets of the ACLU district court action that led to the extraordinary statement by the federal judge.

Judge Vince Chhabria, in that San Francisco Northern District case, said that “ICE must take (action) to ensure social distancing and other protections for the people who remain detained at the

facilities…Because time is of the essence,” acknowledging the “public health threat currently posed by crowded detainee populations and ICE’s failure to respond.”

In the suicide death of Choung Won Ahn, the federal judge was, in a way, prophetic.

“Make no mistake: ICE and the administration are responsible for this death. No one should be held in civil detention during a pandemic. This tragedy was senseless and preventable. Suicides in ICE detention have increased to disturbing highs under this administration — and that was before COVID-19. ICE is now detaining approximately 28,000 people; many have reported receiving almost no official information about the pandemic.”

According to the ACLU, Choung Won Ahn, who had diabetes, hypertension and several heart-related issues, had been held in Mesa Verde since Feb. 21. In March, a group of attorneys made an urgent plea to release Ahn and others with serious pre-existing health problems because of the high probability they could contract COVID-19 while in detention.

Some were released, but not Ahn.

“We are processing, and we are very emotionally upset,” said Ahn’s brother, Young Ahn. “We are angry. He did not deserve to be treated this way. He’s a human being, but to them, he’s just a

number. There are other people in the same situation. It shouldn’t be happening again.”

And, up in Marysville’s Yuba County Jail, young Juan Jose Erazo Herrera reportedly was on hunger strike despite a weakened immune system. He was homeless in El Salvador, said friends, and fled after police there tortured him and gang members threatened to murder him if he didn’t join. He came to this country alone as a teenager and has now been in ICE custody at Yuba County Jail for over two years while fighting his case.

Supporters said the jail retaliated against the youth when he started his hunger strike May 10, putting him into medical segregation in a freezing room. He released this statement as he began the strike:

“We are more exposed to the illness here than we were before. I’ve been locked up a long time…ICE is exposing me to this illness, and they just don’t care. ICE says we’re a danger to society, and that we’re protected from the disease. We aren’t a danger; we are in danger. We’re in danger here because we could get sick at any moment and they (are) putting us in greater risk. 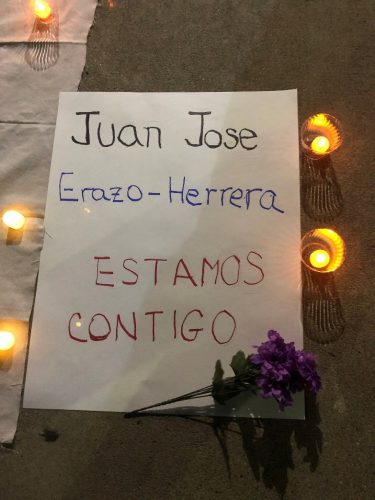 “His action, like the actions of hunger strikers across the nation, brings attention to the levels of fear and desperation and the urgent need to release immigrants in detention from jails and prisons given the horrific risk of contracting COVID-19 in crowded and unsafe conditions,” said supporters, who held a 24-hour overnight vigil at the Yuba Jail.

The Yuba County Jail has a contract with ICE, and now holds a little more than 100 immigrants.

The detainees are at “high risk of contracting COVID-19. The jail has not taken appropriate measures to prevent the spread of the virus.  Firsthand reports from individuals inside of Yuba County Jail have made it clear that they do not have access to proper sanitation, such as soap and cleaning supplies,” claim supporters.

Like most jails and prisons, health officials have been saying the institutions are  – like nursing homes – at a serious risk for the rapid spread of the virus because most live in overcrowded dorms where they sleep and eat within feet of each other with no chance to maintain social distancing.

There have been repeated charges that detainees at Yuba Jail are not given “appropriate cleaning supplies to disinfect their designated areas and common spaces. At the same time, the facility’s management is not making sure that dorms are cleaned frequently.”

The jail has a history of unhealthy conditions, which ICE opponents call “inhumane.” And there has been a court-ordered consent decree for about 41 years.

Although not uncommon for most county jails in the state (including Sacramento), masks are not regularly worn by detainees or staff.

However, in a bit of an unusual move, the jail actually requested 1,000 masks be made for detainees and staff and donated to the facility. They were, but detainees said they only wear them when appearing before a judge on a live stream. And they said the masks are not properly cleaned.

“All of this only increases the possibility that COVID-19 will enter the facility. Given the long-term problems with medical care and access…we do not believe that individuals who are ill will be afforded proper medical care or treatment. Clearly, the facility has not taken the appropriate steps to ensure that the health and safety of individuals inside the Jail,” charged The California Committee for Immigrant Liberation.

In a letter to officials, the group said: “We urge you to take action before this facility becomes a site of mass infection and claims the lives of those detained, while overwhelming the medical resources of the Marysville community in which this facility is located.”

The group released the following demands: 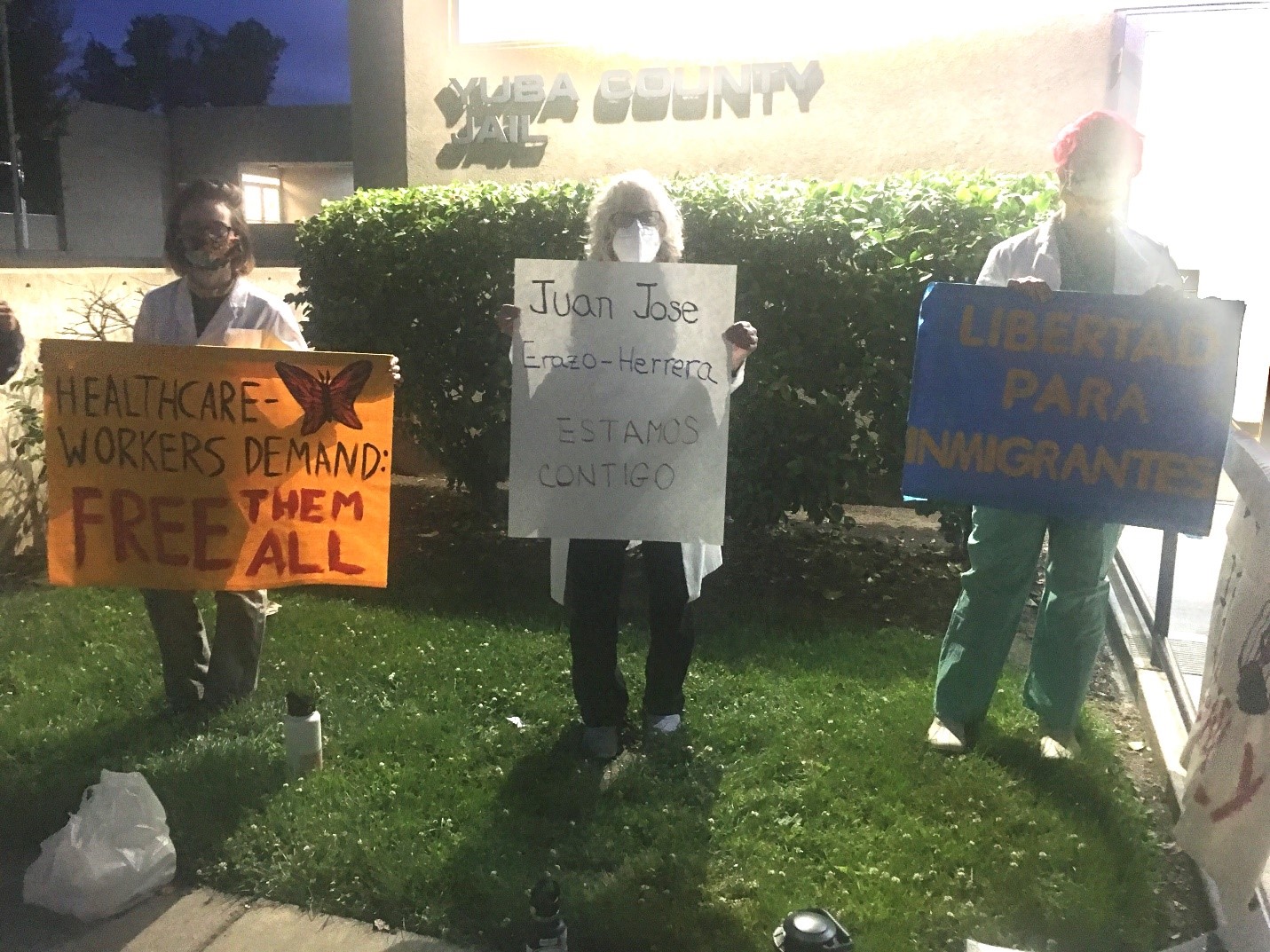 Advocates have detailed a multitude of ways in which the issue of COVID-19 can be addressed in immigrant detention, including:

1. ICE exercising discretion to release individuals from these facilities.
2. Calling for moratorium on the transfer of individuals from state custody to ICE detention, and to state and local collaborations with ICE.
3. State intervention to halt the expansion of private detention facilities.
4. Rigorous intervention, inspection, and oversight by local, state, and federal officials.
5. Legal action to hold public and  private operators accountable for their negligence and misconduct

Doctors for Camp Closure (D4CC) is a national organization of healthcare professionals taking action against medical neglect and human rights abuses of migrants and asylum seekers entering the United States. The Sacramento chapter of D4CC organized a 24-hour vigil at Yuba ICE Detention Center May 16-17, 2020. This was one of ten vigils organized by D4CC chapters across the country in the past week. They serve to honor those who have died in immigrant detention, and call for the release of all detained by Immigration and Customs Enforcement (I.C.E.), particularly in light of the COVID-19 pandemic.