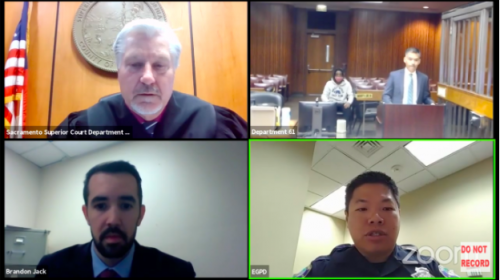 SACRAMENTO, CA – A man will face a jury trial after allegedly assaulting the man his mother was dating.

Fezshuan Eugene Smith will be brought to trial on three felony charges, including aggravated battery causing serious bodily injury, assault, and vandalism against his mother’s boyfriend, when he went to his mother’s home after she told him she was scared and afraid of her boyfriend.

According to the preliminary hearing Friday in the Sacramento County Superior Court, a physical altercation on Feb. 23, 2019, ensued, where the alleged victim reported receiving a wound to his eye, jaw and left clavicle.

Although appearing from different locations, the hearing, held via Zoom and live-streamed via YouTube, involved Judge Kevin McCormick , Deputy District Attorney Brandon Jack, Assistant Public Defender Jesse Ortiz, and Smith, who was present and out of custody.

The State had two witnesses. The first witness was Elk Grove Police Officer Jonathan Wayne Wah Gong, who said he arrived at Kaiser South Hospital at 9440 West Stockton Boulevard in Sacramento in response to an assault. Officer Gong was directed to the alleged victim, who was on a gurney, and began questioning him.

The alleged victim recalled the chain of events that occurred to Gong, explaining that two men “jumped him” and that these two men were Smith and a friend of his. The complaining witness said Smith “sucker punched” him in the left eye, and Smith’s friend then grabbed him from behind, picked him up, and threw him to the ground, causing him to land on his left side.

The alleged victim also reported to Officer Gong that his vehicle was vandalized by Smith. Gong added that Smith suffered a fractured left clavicle, swelling to his face, difficulty breathing and raising his arms, and appeared to be in pain.

Gong spoke with Smith’s mother, who also was dating and had a baby with the injured man. Smith’s mother told Gong she spoke with him earlier in the day and he wanted to pick up some video game controllers from her apartment.

She told the officer that she did not feel comfortable having him at her apartment, and decided to call Smith, her son. She also stated that she was so uncomfortable and scared that she waited in her car in the parking lot for her son to arrive.

Officer Gong testified that the alleged victim said when he arrived at Smith’s mother’s apartment, he had been pacing for 20 to 30 minutes. Smith and his friend then arrived and this was when the alleged

altercation occurred. The officer said that Smith’s mother reported she was still in the car at this time and did not witness any alleged altercation.

The victim told police, said Gong, that after Smith’s friend allegedly grabbed him from behind and threw him to the ground, he got up and ran away from them. He recalled that he walked around the block and returned to Smith’s mother’s apartment complex.

But, as he was approaching the apartment, the alleged victim reported that he saw a large group of people gathered together. He also said that Smith and his friend were hitting and vandalizing his vehicle.

Wanting to reconcile with Smith, the victim said he then decided to approach Smith with open arms in an attempt to give him a hug; however, the victim reported that Smith then punched him in the jaw. The victim said he told Smith he was “done,” and Smith responded by saying something along the lines of “you’re done, you’re a dead man” or “a dead man walking.”

The victim then left the scene to seek medical attention.

Later, the alleged victim reported to Officer Gong that the total damage to his car was between $1200 and $1500.

Ortiz argued that Gong admitted that he did not recall the weight and height of either party, failed to inquire why Smith’s mother was afraid and scared of the alleged victim, whether she was ever struck by him, and did not further question him as to why he was pacing back and forth in front of Smith’s mother’s apartment.

Ortiz also asserted that Gong also testified that he did not take note as to whether there were other tenants in the apartment complex on their balconies who could have witnessed the altercation, that he failed to talk to any other neighbors or potential witnesses, and failed to speak with Smith’s friend.

Further, noted Ortiz, Gong asked another officer to take photos of the victim’s vehicle, but did not attempt to talk to any potential witnesses. Ortiz stressed Gong failed to inquire into Smith’s friend’s location as they arrived at the apartment complex and, during the altercation, did not question Smith in enough detail to determine how the altercation occurred, and did not further inquire from both Smith and the alleged victim as to what their verbal interaction meant.

The State’s last witness was Det. Cameron Mason of the Elk Grove Police Department, who investigated the incident and spoke with the alleged victim, Smith, and Smith’s friend.

Mason said that when he spoke with the complaining witness, he stated that he had a laceration to his eye and a broken clavicle from Smith. The victim further reported that he had not been in contact with Smith’s friend but has had a few civil and cordial interactions with Smith.

The alleged victim also said he wanted Smith to apologize for his actions, but Smith has yet to do so. Smith tried to shake the victim’s hand but the victim refused to shake his hand until he received an apology. The victim confirmed the amount of damages to his vehicle was between $1200 and $1500.

Det. Mason then spoke with Smith, who told the detective that he received phone calls from his mother who said that the victim was being aggressive with her, roughing her up, and being verbally aggressive toward her. The detective said, on his own volition, Smith, his wife, and his friend all drove from Sacramento to Elk Grove to see Smith’s mother. Smith did not say that the alleged victim appeared to be intoxicated.

Upon arrival, Smith got out of the car, while his wife and friend remained in the vehicle, and confronted the alleged victim outside of his mother’s apartment. Smith then reported to Det. Mason that the victim got in his face and was touching him. Smith told the victim to back up but he refused to.

Smith stated that he blacked out at this point and does not recall hitting the victim more than seven times. He could not remember all of the details. Smith said he did not suffer any injuries from the alleged incident.

When Det. Mason spoke with Smith’s friend, he confirmed that he was with Smith and his wife, that Smith received a call from his mother, and Smith said they were driving to her apartment in Elk Grove. Smith’s friend stated that the alleged victim appeared to be intoxicated when they arrived and witnessed the altercation.

He told police that the altercation seemed more like a wrestling and grappling match on the ground. At one point he had to get out of the vehicle and separate Smith and the victim. Smith had previously said he did not ask his friend to get out of the car and assist him. Smith’s friend reported to Det. Mason that after he separated the two, he took Smith’s sister back upstairs to the apartment and did not witness a second interaction between the two but was later was informed about it.

Det. Mason also testified to the extent of the damage to the victim’s vehicle, a one- to two-foot dent on the top of the vehicle and some minor dents to the right rear side.

PD Ortiz questioned Det. Mason, and pointed out that Smith did not think his friend got out of the car but his friend said he was initially in the car and then got out to break up the fight.

On re-re-direct, Det. Mason testified that Smith’s friend never said the victim was on the ground, merely that he was holding the two back from each other and did not physically hit the victim.

Public Defender Ortiz requested the court to dismiss all three charges against Smith for a lack of evidence.

The court ruled the case should move forward to a trial and denied the defense’s motion to reduce the charges to misdemeanors. A trial readiness conference will be held on July 23, 2020 at 8:30 a.m.. A jury trial is scheduled for August 6, 2020, at 8:45 a.m. in Department 61.