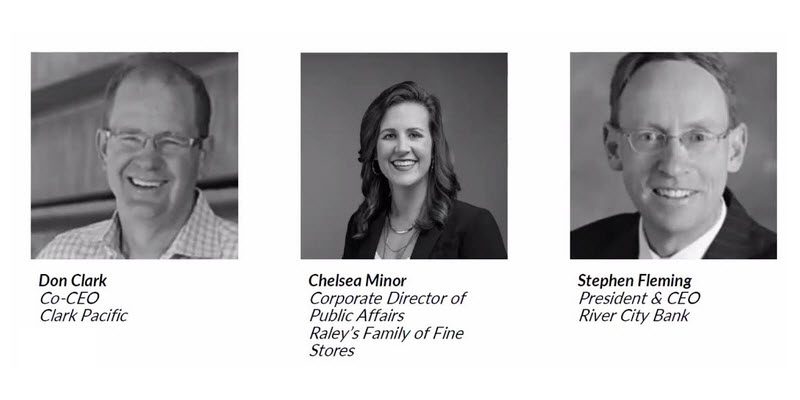 How is the business sector dealing with the pandemic?  Greater Sacramento hosted a discussion moderated by Supervisor Don Saylor on Thursday with a discussion from leaders in the construction, food and banking industries to explore how things have changed and how well new practices have and have not worked.

Supervisor Don Saylor served as moderator and noted that these are challenging times with stay-at-home orders.

“We all know that every job is essential to the family and the individual who works there,” Supervisor Saylor said.  “We need to find ways to safely re-open and move forward on our road to recovery.”

At the same time he said that these industries—construction, food, and banking—“are critical industries to our recovery, they are strong in our region.”

Don Clark is from Clark Pacific, headquartered in Yolo County for over 55 years, performing commercial construction.  They have been deemed an essential business, which has allowed them to continue operations through the stay at home.

“It is not as easy as it sounds,” he explained.  “The risks of COVID-19 are not going away any time soon.”

These risks and their continued operation forced their company to develop safe protocols. He explained that 200 engineers and their team had to figure out quickly how to effectively work from home.

He explained, “It seems like it’s worked reasonably well for us.”

Not everyone can work from home, however.  “To continue our fabrication facilities,” he said, “we created a task force that met daily.  The group was responsible for developing and implementing our work safety protocols.”

They created a workplace continuity plan, which is a continuing evolving plan that includes all best practices.  This includes constant temperature checks.  People have been hired whose responsibility is to clean and disinfect across the facility.  there are face mask protocols for everyone working in the plant.

“Overall it’s been very effective,” he said.  “We’re very comfortable and we’ve not had one incident.”

He explained that they are hoping to start getting some of their office people back, but they have to create protocols for that in order to do it safely.

“The good news is I think we can do this in not only a safe manner, but something that works effectively for us,” he said.  “We’ve lost some productivity, but overall it’s been successful and we’ve been able to adjust to it.”

Chelsea Minor, the corporate director for Raley’s, talked about the challenges for their industry.

She explained that as an essential business they have remained open and their challenge is to make sure that “the supply chain for food is secured and accessible to all.”

Minor said they’ve made over 40 operational changes throughout this crisis – especially early on.

“This is going to become the new normal,” she said.

Minor explained, “We are very lucky in the United States that we have a very sophisticated food system.  But specifically, we have seen in this situation the value of our local supply chain.”

The role of farmers in the local region, she said, “has been not only tried but tested in this time frame.”

About the availability of products and continuation, she said, “That is because of our local suppliers.”

They expect toilet paper and other paper supplies to come back in the next four to six weeks.

“That was something we did not expect,” she said.  “So bear with us.”

Stephen Fleming is President and CEO of River City Bank.

“We have had to stay open,” he said.  “Most of our employees have been working remotely for the last couple of months.

He said, “I’ve been pleasantly surprised by the level of productivity with the folks working from home.”

He added, “That’s been a learning lesson, something that will change the way our business will work in the future.  I think there will be more flexibility allowing people to work from home given what we’ve experienced with their productivity in all of this.”

But, he said, they do have branches that they operate.  Those have remained open.  In their branches, they have people walking in.  Other banks have gone to drive up only.

Don Clark noted, “We also were surprised by how well it has been working.”  At the same time, he said, “You can’t beat face to face for a lot of what we do.”  He said, “This isn’t so bad.  For some of our long commuters, this is something we will put into our plan.”

Danielle Casey from Greater Sacramento said, “We’re very similar.  There are a lot of positions that you didn’t think could be remote that were forced to do remote, especially with our business support center.”

She noted that some input they have gotten from other businesses is that they were worried about going remote, but found that their team members appreciated going one hundred percent remote long term.

“It depends on the size, scale, and nature of the industry they work in,” she said.

Barry Broome added that in making a huge number of presentations to the Bay Area, “what we have found out is that they are very amenable to a Zoom call—not only now, but into the future.”

He noted that Digital Companies are growing like crazy—1100 percent job growth in the digital sector during the pandemic.

Overall he said there are areas that have really benefited from going online “and we will continue to maintain that.”

Long term, they are more likely to give people a chance to telecommute from work.

“There is a lot lost in collaboration and a lot lost in strategic planning,” he said.  He has created teams of three that work in a room with social distancing, masks and surgical gloves.

Stephen Fleming said, “It’s somewhat nuanced.  It depends to a certain extent on the attitudes of your employees.  Some employees are anxious to get back to the audience… they miss the audience environment.”

Others, he said, “it’s going to be harder for them to come back,” especially those with long commutes.  “We will look to see if we can accommodate them as we go forward.”  That will depend on the roles that they play.  “I don’t see us… to rush to require people to come back in.

“They are functioning at such a high level as it is,” he said.

Questions about the food supply were also addressed.

“The food is safe,” Chelsea Minor explained.  She added, “This is not a food borne illness.”

“Especially for products that you’re cooking, you should have no fear,” she said.

She did recommend wiping off packages when you don’t know who touched it.

Overall, she said, it would be normal “as long as people continue to monitor their purchasing, and not over purchasing for more than a week or two for their families.”

Barry Broome at the end noted the potential for economic development in Yolo County.

“Obviously a lot of sobering news,” he said.  “But I want to give some positive news as well.

“We have 14 science-based enterprises looking at Yolo County right now for space,” he said.  He said that he spoke with Aggie Square that morning, and “28 companies are committed.”

The Regents will approve that in November and, in January, they will break ground on the $1 billion project in the urban core.

“The strength of that institution is still in Davis, not Sacramento,” he said.  “If you can get 28 world class companies and $1 billion in the Sacramento market which is largely the medical school and health care sector, think what happens when we more meaningfully engage the number one veterinary school in world, the number one food and agricultural school in the world and all of the other incredible sustainability achievements.”