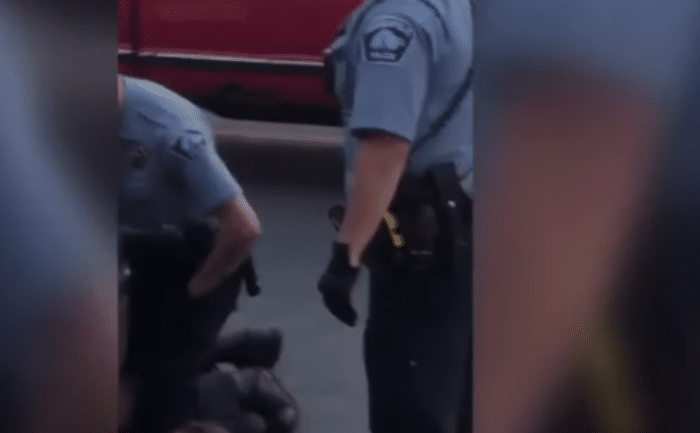 Minneapolis, Memorial Day 2020. A Black man’s head lies on the asphalt, and the white Minneapolis police officer holds an upright position, with his knee snugly pressed against the first man’s neck. The cop slowly chokes the life out of the Black man, who is pleading for mercy, telling him he cannot breathe. A crowd of protesting people assembles on the scene, asking the killer cop’s partner questions.

One man asks the partner, an Asian-American officer, “Are you gonna let him kill that man in front of you, bro?” He just stands there, expressionless.

It is a scene caught on video, another one that caught the nation’s attention immediately. It is a story about Minneapolis race relations, but more importantly one of America’s police so often steadfastly believing that Black men do not matter, that they are targets to neutralize.

Compare the white cop’s response to the nature of criminal allegation—“forgery in progress”—that allegedly led to the arrest of the unnamed Black man. There is absolutely zero humanity there.

As a shocked onlooker says in the video, the white cop seems to be “enjoying that.” He then says, “He’s a bum, bro. You could have put him in the car by now. He’s not resisting arrest or nothing. Look at you. Your body language, you bum. You know that’s bogus right now.”

And now the nation will wait, listening for news that the police officer will be indicted. He is reportedly under investigation by state agents and the FBI. Even some white apologists for policing who watch the video will find themselves in uncomfortable accord with Black activists. It is just that blatant.

The news that investigations are underway⁠—how could they not be when such a video emerges?⁠—at federal and state levels is a relief given that there would be practically zero chance of one in

the local jurisdiction of Hennepin County.

From 2000 to 2016, the incumbent Hennepin County Attorney, Michael O. Freeman, never indicted a police officer for killing a civilian.

In November 2015, Officers Dustin Schwarze and Mark Ringgenberg fatally shot Jamar Clark, a Black man. Seven months later, Freeman declined prosecution and cleared the shooters. When describing his decision to not use a grand jury in that case, Freeman stated that “Secrecy, lack of transparency and no direct accountability strikes us as very problematic in a democratic society.” At the same time, he withheld video footage of Clark’s killing from the public.

But while one may gather that Black lives do not matter to Freeman, white lives certainly do. Breaking with office culture, Freeman decided to prosecute Mohamed Noor, a Black Muslim immigrant cop once praised by the liberal former Minneapolis Mayor Betsy Hodges, for shooting Justine Ruszczyk, a white woman from Australia, in 2017. Noor, a rookie officer, apparently shot into the dark after his partner was “startled” by a loud noise, raising doubts that there was an intent to kill anyone. Nonetheless, Freeman pummeled Noor in court, landing a murder conviction and a 12-and-a-half-year prison sentence.

Infamously, Freeman does not know or understand Black people. In an attempt to humanize himself to two Black reformed gang members on an NPR radio show, Freeman told a story about how he was detained at 11 years old for turning construction equipment on during the Halloween night of 1959. Freeman was not taken to the police station, though he was taken home to his father, future Governor and Secretary of Agriculture Orville Freeman, apparently for old-fashioned home discipline.

The two young Black men asked him how Freeman felt he would have been treated if he was Black. Freeman said he did not know, as “Every kid in my neighborhood went to the same school. Schools were more homogenous. There were not a lot of non-caucasian kids in my school.” He called that a “simpler society.”

Mark Haase, currently Governor Tim Walz’s appointed overseer of the Minnesota Department of Corrections, attempted to unseat Freeman in the last electoral cycle, running as a criminal justice reformer. The Hennepin County DFL (the equivalent of the Democratic Party in Minnesota) transferred its endorsement to Haase. Part of Haase’s campaign was police accountability; he promised “an independent advisory panel for police use of force cases,” among other changes.

But unlike many other credible reform candidates, Haase did not obtain massive Soros-affiliated Super PAC support. In my forthcoming law review article in the Washington and Lee Journal of Civil Rights and Social Justice, I show how Soros PAC support to successful reformers like Larry Krasner in Philadelphia and Aramis Ayala in Orlando often amounts to over $30 per vote. In Haase’s case, he was expectedly out-fundraised by Freeman. Haase still obtained a respectable 45.4 percent of the vote, but a loss is a loss, and meaningful police accountability was essentially foreclosed for another four years.

In the current case, the white cop, thus far unnamed, sought to take full advantage of the impunity for murder that Michael O. Freeman has systematically created along racial lines. In the viral video, he does not hesitate, looking as stressed as someone casually eating a cheeseburger.

The scene shatters recent milquetoast efforts to make the Minneapolis Police Department less bigoted and more humane. Organizations as renowned as the US Department of Justice, the Justice Collaboratory at Yale Law School, and Dr. Phil Goff at UCLA recently came together to create the National Initiative for Building Community Trust and Justice, choosing five pilot sites including Minneapolis for their experiment.

In 2019, researchers at the Urban Institute found that the National Initiative made extremely incremental progress. On a scale from 1 (strongly disagree) to 4 (strongly agree), Minneapolis PD officers went from a 3.17 to a 3.45 on average in agreeing with “Procedural Justice” principles. These radical notions that we are led to believe rival Martin Luther’s ninety-five theses include statements like “Officers should at all times treat people they encounter with dignity and respect” and “It is very important that officers appear neutral in the application of legal rules.”

Did the two officers during this callous murder treat their victim with “dignity and respect”? It is a laughable question, causing one to wonder what the point of this type of work is. The aforementioned Dr. Goff might know, as he received a tremendous $5 million from Google in 2017 to do it. Police “reform” that changes little is a business.

Perhaps the answer that explains what transpired in Minneapolis is that a large percentage of white Americans, who constitute the vast majority of Hennepin County’s population, do not want even the worst police officers held accountable. Yet in many ways, the government exists to force people to change their behavior toward what is right. In a very real way, that is why any criminal justice system exists. Ours is clearly not working.

There surely is no better time for supposedly liberal and progressive city council members and mayors like the ones in Minneapolis to slash police budgets, as the status quo of cowering to the political cudgel of the police unions has led to numerous awful murders in broad daylight.

Furthermore, every police officer should face mandatory screening and default disqualification for appropriate mental illnesses and personality disorders. While this may sound harsh, US airline pilots face disqualification, as a matter of law, for a laundry list of health issues, unless they are adequately medicated and controlled. The list ranges from the physical, like diabetes, coronary heart disease, and epilepsy, to the mental, like bipolar disorder and psychosis. Why? Because, like police, airline pilots can easily kill people during the course of their duties. The jobs of both are simply different than the vast majority of existing professions.

Police unions will screech, but the police are not the boss of the people. The people, and the politicians we elect, control the police. It is time for us to start acting like it.