Davis has not solved the housing shortage. The best way to address this shortage, given the community demands for limiting peripheral growth, is to densify the urban corridors such as Russell Boulevard with projects like University Commons.

The city has approved new apartment complexes in the last few years, yet none have tenants. Worst yet, multiple projects have been held up for years in lawsuits delaying the production and ultimately increasing the costs which get passed along to renters.

The demand for housing in Davis and throughout California has hit breaking points. People experiencing homelessness has risen throughout the state, while rents and housing prices have only

continued to go up. The pressure is so high that last year California instituted its first statewide just cause eviction law and rent increase cap (5% + CPI).

Here, I wanted to put numbers using data found on why the issues are so stark here in Davis and are often lost to the non-student members of the community.

Overcrowding, Increasing Rates of Density, and Numbers of Mini-Dorms for Students.

Published a year ago, the “UC Davis Student Housing Affordability and Insecurity Report for 2017-18” by Dr. Robert M. Saper, which I collaborated on, found stunning results. We performed a comprehensive scientific survey of UC Davis undergrad and graduate students accessing their housing issues, such as their rental rates, overcrowding, and student homelessness.

The rise in population in Davis, without following up with rental units, led the per-unit density to increase radically. Using census data, I found that in 2001, renters lived an average of 2.17 people per rental unit. In 2018 that has since expanded to 2.94 people per unit or a 35% increases.

Often called “Mini-dorms” these overly packed homes and apartments are rightfully a source of concern for long term residents and are, responsible for problems from trash, noise, and many more cars parked on the street.

These overcrowded homes are directly a result of a lack of supply. Undergraduates do not want to live in overly dense apartments and houses. Its simply that there are not enough places for people to live, and forcing many to cram into space not designed for high density. The best way to reduce the number of Mini-dorms is to provide additional housing for the student community.

Just recently, the Vacancy Survey found that Davis vacancy rate is 1% the highest since 2014 but came with a 5.5% increase in rent. The average increase was just 2% below the new statewide mandated rent cap. Demand remains incredibly high, and the increased vacancy rate is likely from people now commuting by car to Davis.

Another study from Dr. Saper in 2018, “Turning the Curve on Affordable Student Housing” quantified the increase in the growth of commuters to UC Davis. From 2008 to 2017, an additional 3,000 people, staff and students, lived outside of Davis and commuted daily to UC Davis. The vast majority of these drive single-occupancy vehicles. If those new commuters were able to live, attend school, and work in Davis, they could have been saved longer commutes, which likely added tons of CO2 emissions over that time.

Generation Z and UC Davis students are far less likely to own cars. According to the UC Davis transportation survey in 2017-2018, 71% of those living within 1 mile of campus use their bike to commute to campus. Compared to those living 5 to 9 miles away, it jumps to only 10% using a bike and 78% drove a car 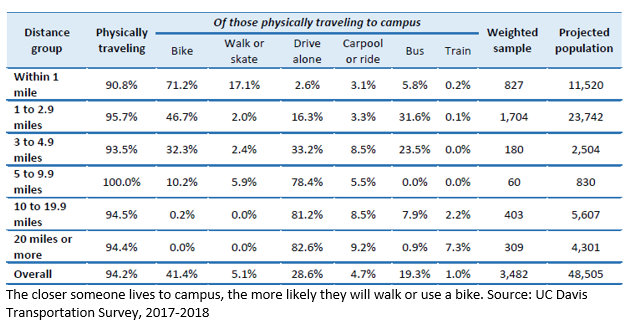 Although lowered parking requirements have been called an experiment, reducing the incentive to drive is a move in the right direction to minimize carbon dependence and reducing car traffic. Mixed used development would allow those living there to access amenities without having to jump into a car and drive across town.

University Commons is one of the best locations for dense growth. The densification of the Russell Boulevard corridor allows residents to have access to multiple bus lanes and live across the street from campus, lowering an individual’s traffic impacts.

Lastly, a significant concern brought up by many, is to place the growing student population housing on campus as opposed to in the city. UC Davis does need to play a role in helping provide housing; however, this does come with some downsides.

Additionally, property tax revenue from the UC Davis campus does not go to the City of Davis, even though those living on campus still use many city services like roads and trails. The student population causes less of an impact than permanent residents primarily for the fact that a majority of students leave town for 3 months of the year. Thus, student residents may be more likely to be revenue positive for the city through the property tax revenue their rent supports.

Now due to the recession, Davis is estimated to be facing anywhere between $10 million and $22 million deficit this fiscal year. The deficit will be hard on local government and should put greater scrutiny on the longer-term tax implications of pushing student housing to be an exclusive campus issue.

Finally, the Davis community made the responsible decision to be cautious of outward sprawl. Yet 20 years of no new apartment complexes has caused a housing crisis, hurt DJUSD enrollment and city budgets, and led to thousands of more commuters.

University Commons development is the right type of project moving forward for Davis. Providing new student friendly apartments will open up space for other renters and potential buyers. The project is right next to campus; those living there would not need to drive a car. And building up and not out, respects Davis’ preference for infill verses peripheral growth.

84 thoughts on “Guest Commentary: Housing Demand Is Still High, and University Commons Would Provide Relief in a Superb Location”