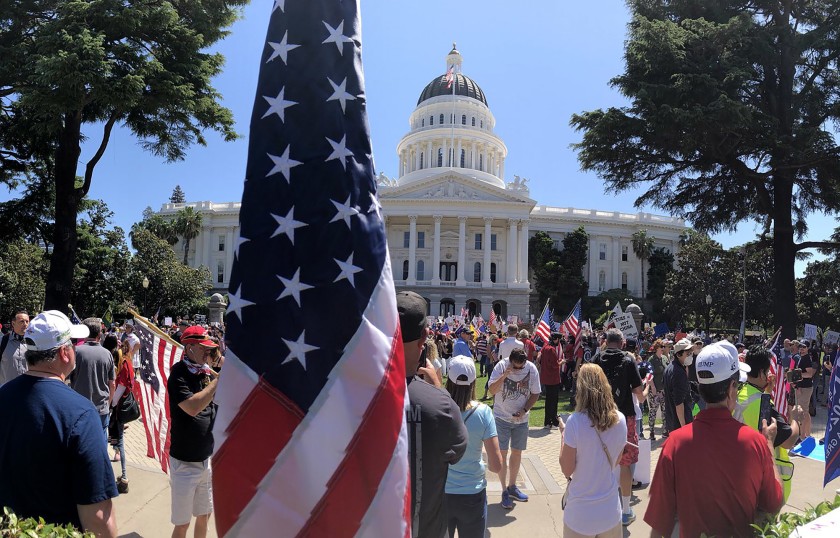 For centuries, people in this country have assembled to demand change and protest abuse of power. Protests have been central to nearly every major political advancement since the founding of the United States. The right to protest is enshrined in the First Amendment, which prohibits the government from “abridging the freedom of speech” or “the right of the people peaceably to assemble.” California’s Constitution likewise guarantees the right of the people to “instruct their representatives, petition government for redress of grievances, and assemble freely to consult for the common good.” Dr. Martin Luther King, Jr. said “the greatness of America is the right to protest for right.”

The COVID-19 pandemic forces a reckoning with the balance between freedom of assembly and public health and safety. The virus is highly contagious and the risks of exposure include severe illness or death. These risks are especially high for medically vulnerable people and communities that our systems have failed, especially Black and brown communities.

Our state and local governments have understandably adopted emergency limits on the right to gather in public. At the same time, as the economy falls deeper into peril and the pandemic exposes and exacerbates deeply rooted racial, economic and other inequities in our society, public discourse about these urgent issues is more important than ever.

The Right to Free Expression and Protecting Public Health

Freedom of expression and public health can and must coexist. The need to protect our right to protest is especially critical now, when government power has been extended to a historic peak and opportunities for civic engagement are notably limited.

During the COVID-19 pandemic, people have shown resilience and resourcefulness in finding ways to protest. While alternatives to physical gatherings such as digital activism, boycotts and monetary contributions are important, they are not necessarily as effective, and neither are they equally accessible or

In California, shelter-in-place/stay-at-home restrictions have recently loosened. State and local governments are allowing individuals and families to exercise outdoors, enjoy parks and beaches and play golf, provided they practice physical distancing and wear face coverings when appropriate. Also, the California Attorney General’s office has taken the position that the current executive order on public health does not prohibit drive-in worship services.

The First Amendment does not allow our governments to favor recreation over protest and religious congregations over political gatherings. In fact, political protests enjoy special protection under the First Amendment, especially when they take place in public places traditionally associated with expressive activity.

The government may enforce general regulations on the time, place and manner of expression only where those regulations are content neutral, narrowly tailored to serve a significant government interest and leave open ample alternative channels of communication. In addition, any decisions to issue permits may not delegate overly broad licensing discretion to a government official. If the government allows recreation and worship consistent with public health requirements, it must do the same for protests and rallies.

The Right to Protest

For the moment, among other potential measures, we recommend that protest organizers:

In these extraordinary times, protest organizers should be especially proactive in informing protest participants about the risks they may face. Organizers should consult the applicable state and local public health orders to assess the risks of engaging in conduct that may violate those orders. Local permit ordinances and general information on the right to protest may also be useful, although such guidance may not necessarily apply right now. Given our nation’s history of police brutality, organizers should give due consideration to the fact that racial profiling and the unequal application of the law can lead to disparate consequences for participants of color.

We do not encourage or condone conduct that endangers the community by significantly aggravating the risks of COVID-19 infection. We strongly encourage anyone who has been exposed to COVID-19, is at heightened risk of illness from infection, or is sick to follow public health guidance and consider alternatives to public assembly as a means of protest.

We call on the governor, attorney general, public health officials, law enforcement agencies and prosecutors to amend or clarify state and local public health orders to allow public protest on terms substantially similar to those allowed for other public activities, and to enforce reasonable public health orders without discrimination based on the content of the speech or the identity of the speakers.

The United States Constitution ensures “We the People” can remain both safe and free. The First Amendment does not permit severe restrictions on public protest to continue one minute longer than is absolutely necessary. When so many cracks in our society have been exposed and so many of us are suffering, we must preserve “the right to protest for right.”

46 thoughts on “Guest Commentary: Why Freedom of Expression and Public Health Must Coexist”